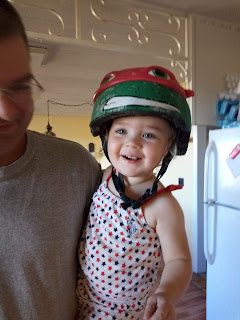 Happy birthday to
my girl

Long version: A. and Cubby were gone on their hunt, so the remaining children ate the pasta with some of the leftover hamburger and I ate the soup.

It was a really good day for soup, because it was freeezing all day. 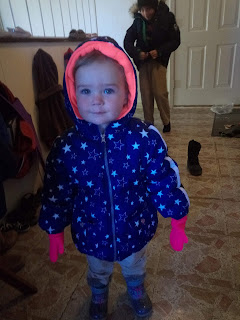 Poppy was all geared up to go outside to play. She lasted about three minutes. So much for the northern blood she should have from her frozen place of birth.

Short version: Tuna salad sandwiches for the kids, more soup for me, brownies

Long version: Still just the four of us. I made bread this day, so it seemed like a good idea to have sandwiches with some of the fresh bread.

Brownies are now apparently the tradition when A. is gone. It's a popular tradition.

Long version: The return of the hunters, and also the return of full dinners. I made the taco meat with ground beef and green chiles, and I made the tortillas particularly as a treat for Cubby, who loves homemade corn tortillas, but won't even eat the storebought ones when we have tacos.

A. told me that Cubby suffered from not having Mom's cooking while they were hunting, even though I did actually send them a hobo pack for each night, consisting of potatoes and hamburgers.

Apparently, Cubby needs regular meals, unlike his father. Guess he'd better really practice that cooking, because he's in for a shock when he leaves home in eight years or so.

Long version: I had a few cups of taco meat left, with which I made my standard combination. Except I only had about a cup of raw rice left, so it was kind of heavy on the meat. No complaints, though.

Long version: Because I had to be at work on Monday and the elk meat really couldn't wait any longer, A. did all the packaging and freezing of it. He left one bag of meat in the refrigerator, which included the tenderloins. I sliced those into medallions and fried them, making a very quick sauce at the end with apple cider vinegar and butter.

The meat was very tender, but VERY gamy. Like, the strongest tasting meat I have ever cooked. Charlie and I were not such fans, but everyone else took seconds. Or even thirds, in Poppy's case.

And bonus: A. told the kids that eating that strong meat would make them strong, which I reminded Jack of when he had to get his flu shot at school the next day. I told him he was probably so strong now that he wouldn't even feel the shot or cry at all. He didn't, and then spent the rest of the day telling everyone that he didn't cry when he got his shot because of the elk meat. Heh.

The watermelon was a huge one that Rafael brought to us because he and and his wife couldn't begin to finish it. It was grown by a friend of his about sixty miles away, and it's the best one we've had so far.

Long version: I remembered when I was cooking dinner Tuesday that I had a 4-H meeting with the kids Wednesday and probably wouldn't be home until almost 6 p.m. The bag of elk meat A. had left in the refrigerator also had a roast in it, so I browned that while I was making Tuesday's dinner, then added a lot of garlic, salt, pepper, oregano, and basil, plus the remainder of a can of tomatoes in the refrigerator.

It sat in the refrigerator overnight, and I put it in a 300 degree oven at 7 a.m. Wednesday morning, with instructions to A. to turn the oven off at noon. He did, and all I did when I got home was put it on the stove to heat up a bit more. This cut was much less gamy than the tenderloins, thankfully.

The pesto bread was just thick slices of bread with butter and the last bit of pesto left from the week before, stuck under the broiler until they were crispy.

Long version: My sister arrived this day, and guests mean either tacos or pizza. Or both, depending on how long they stay. I went with tacos first, so every member of my family has had the opportunity to eat tortillas made on my dad's tortilla press.

While I was making the tortillas, Cubby and Charlie were outside playing with their new heavy-duty utility wagon, Unfortunately, Poppy decided she wanted to play, too, which resulted in her coming in the house crying with an enormous goose egg on her forehead. 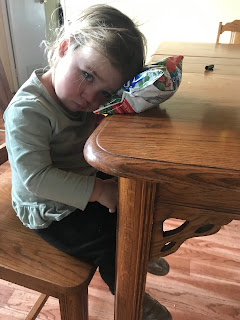 Portrait of a small girl with three older brothers.

That bag of frozen peas fixed her right up, though, and she went right back outside.

We alllllmost finished the watermelon, but not quite. Not that it matters, as we have another at least as big waiting for us to eat that Rafael also gave us. 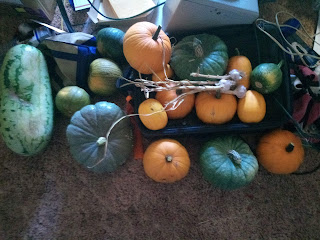 And there it is, hanging out with the squash in A.'s office.

Shot Him an Elk When He Was Only Nine

An interesting thing about the state of New Mexico is that there is no minimum hunting age. And that is why nine-year-old Cubby--who completed his hunter education course just this spring--was able to enter his own name in for the elk draw this year. And draw a tag for a mature bull elk in a hunting area about two hours from here.

The prospect of taking a nine-year-old hunting on a mountain in October on a hunt that would require camping, hiking several miles, and packing out hundreds of pounds of meat in the event of Cubby actually shooting an elk would probably seem ridiculous to most men.

Luckily for Cubby, his father is not most men. A. was all, "He drew for that mountain, and he's going to hunt that mountain."

On a positive note, more than one person told A. that that area is the best for elk in the entire state, and because A. and Cubby were planning on hiking in about five miles, they were unlikely to see any other hunters.

They scouted the mountain a couple of weeks ago and found that our Honda won't go to the top of the track that goes part of the way up, so that meant that they would have to hike in from fairly far down. And since they were going to be camping up there, that meant they had to carry all their gear on their backs all the way.

Because it was dry the weekend of the hunt, A. decided to do without a tent. But because it was cold--well below freezing--he brought two sleeping bags for Cubby and one for him, plus wool blankets. His pack was incredibly heavy just with the bedding, ammunition, and other sundry things. That meant that Cubby carried all the food in his pack.

They hiked in six miles to their first campsite. See those two teeny tiny peaks way in the distance? They went to the top of the one on the right. Insane. 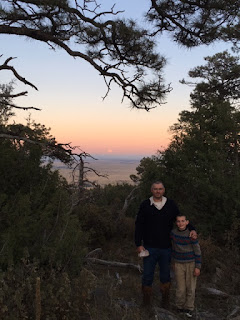 Like this cool one with the moon in the background.

It was a strenuous, physical hunt, with a lot of hiking and stalking and crawling around in the underbrush. They camped out for two nights and hunted all day Saturday with no success. But first thing Sunday morning . . . 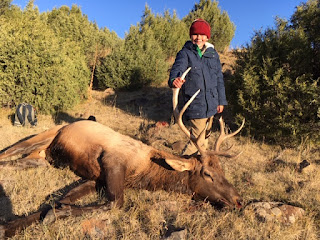 Cubby shot that elk right through the heart, a perfect shot, from 35 yards away.

Then the real fun began, as A. gutted, skinned, and boned out the meat at high speed so he and my brother could pack it all the way back to the car. They carried their own packs with all the gear they packed in, along with a game bag of meat weighing approximately one hundred pounds. Each. Five miles.

Do you know how brutal that is? So brutal. And Cubby carried the elk's rack on his own pack, which is a not-insignificant weight when you only weigh 70 pounds yourself.

They made it, though, and we now have about a thousand dollars worth of meat in our freezer and one very, very proud young hunter.

Maybe not as dramatic as Davy Crockett's bear when he was only three, but pretty damn good for nine years old.