That title is not misspelled, but it may be the worst title in the history of blogging. You'll see why in a second.

A few days ago, our very elderly neighbor called to tell me her red currants* (you see about the title? I apologize) were ripe and she would be delighted if I would come pick them all and use them. I assured her the delight was all ours. A. proclaims currant jelly to be the most exquisite of all jellies (his words, believe it or not), and I still remember with great fondness a currant/blackberry jelly the MiL made several years ago.

So it wasn't lack of interest that kept me from getting over there to pick currants; it was a lack of opportunity. Taking the children with me would have made it sort of difficult to actually pick the currants, since this property is a bonanza of old tractors and RVs and various other items of interest to little boys.

My opportunity came this morning, however, when A. announced his intention of going to the neighbors' to cut some more wood. His brother, who is here for the weekend with his wife and daughter, went with him, as did Cubby. Charlie, the MiL, my sister-in-law, and my niece all piled in a different car and went to pick currants.

We got a LOT of currants. 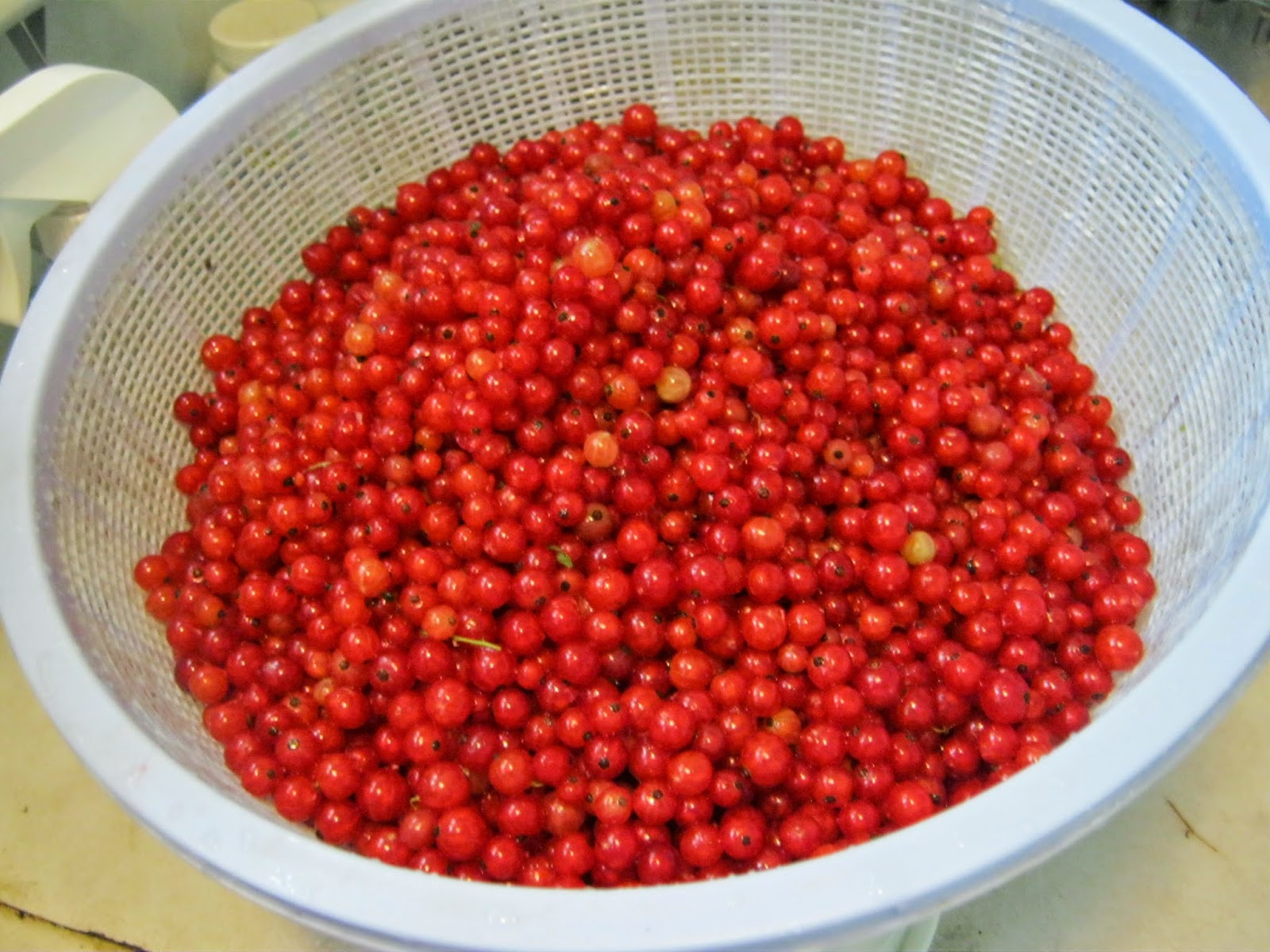 The MiL and I spent about 45 minutes during naptime pulling the currants off their stems, after which I crushed them a little, added a bit of water, and put them on to simmer. I measured approximately 19 cups of fruit before they were crushed. The recipe for currant jelly in the Ball Blue Book calls for five cups of currant juice. I'm not sure how much juice I'll get from 19 cups of currants, but I think it's safe to assume I'll have at least enough to make two batches of jelly, which is about eight pints.

The currants are simmering at this very moment. A. has gone to the hollow to cut up an enormous limestone boulder into manageable pieces for stoneworking, his new favorite hobby. The children are still sleeping. We're going to a party on our neighbors' beach this evening (not the elderly neighbors, our next-door neighbors), at which I anticipate eating many varieties of chips and dip, although sadly abstaining from the phenomenal homemade margaritas. Later, there will be fireworks that I'll probably only see through the window, since I'll be in the house with long-sleeping children by the time it's dark enough for fireworks.

All in all, a pretty good Fourth of July. Here's hoping yours is just as good, my lovelies.


* Currants, for those of you who care, are similar in taste to a cranberry, though not quite so tart and definitely much softer than a cranberry when raw. They're very high in pectin and have a little seed in each one that is big enough to be annoying when chewed, so they're perfect for making into juice and then jelly.

Labels: domesticity, family, fun with food, MiL, the A team

We have reached a sibling milestone: Charlie has finally gotten old enough to really play with Cubby.

Needless to say, I'm a big fan. There is just no substitute for having another kid in the house to play with. Adults are too boring; they will never fully entertain a child. At least, not for long. But two kids together--assuming they're not whacking each other with canes or pushing each other down, not that my children would do anything like that--can just play and play and play until the adult supervising is bored out of her skull just watching them. 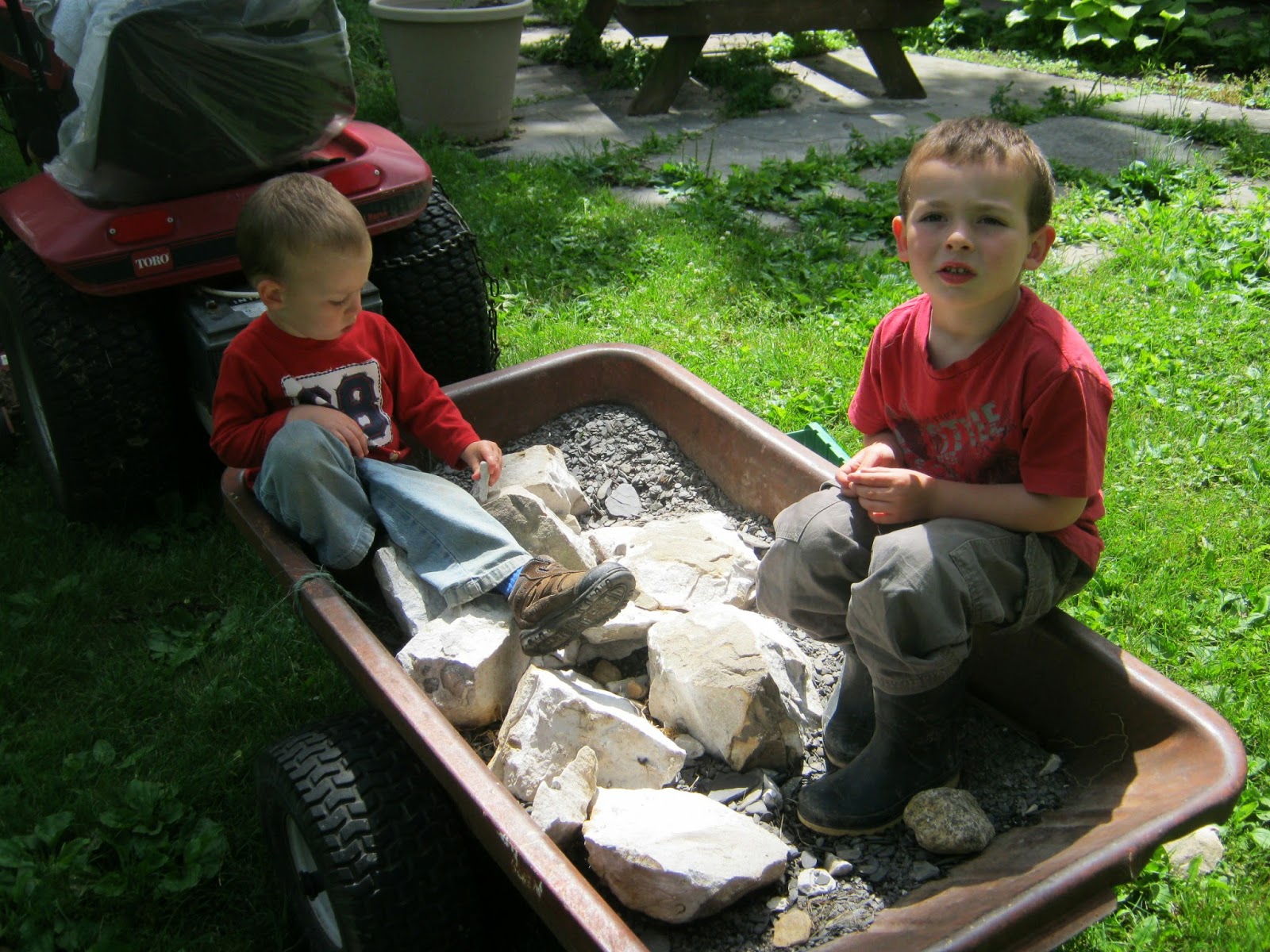 They sat in the wagon for a good half hour whacking rocks. The wagon was conveniently parked right outside the kitchen door, which meant that I could make dinner and keep an eye on them through the door. How convenient.

This only happens sporadically throughout the day, but the instances of Mommy-free playing are getting more frequent and longer. And that makes for one happy Mommy.

At 5 p.m. last night, A. called from his cell phone. They had set up camp, the fire was going, and the children were practicing sleeping in the tent. All was happiness and joy.

At 8 p.m., I called A. on his cell phone. They were all in the tent. A. said it was really hot in there, and all I could hear in the background was continuous screaming along the lines of, "CHARLIE, STOP IT!" Apparently Charlie was taking full advantage of the close quarters to bedevil his brother. I wished A. luck and hung up.

At 9 p.m., A. called from his cell phone to let me know they were on their way home. Once the excitement in the tent was over and it was really time to go to sleep, Charlie indicated very strongly that he was ready to get out of the tent and go home to Mommy. Also, A. was positive it was going to rain. Also also, I'm pretty sure A. was looking for any excuse to abort the mission and come home to sleep in his air-conditioned bedroom without two small boys climbing on his face.

They got home at 9:40, covered in dirt, soot, and stickiness. I put them right into bed, filth and all, and everyone was asleep by ten o'clock.

As A. said, it was all the fun part of camping without the miserable eight hours in a tent. Good enough.
Posted by Kristin @ Going Country at 6:44 AM 2 comments:

A. and Cubby were supposed to go camping yesterday. A. had been planning on it all week, had told Cubby about it in the morning, and had decided to camp on the beach so that Charlie would be able to go too but also get home easily should the whole "staying the night in a tent without Mommy" not go over so well with him.

But then Cubby fell asleep in the living room at 5 p.m. We thought he was sick, though he didn't seem to have any symptoms of anything other than crankiness. When I carried him upstairs to his bed at 7 p.m., he woke up, demanding food and a shower (his new favorite activity) and books.

So I guess he wasn't sick, just really tired.

Anyway, that was why A. rashly promised him they could go camping tonight instead. He just can't bear Cubby to be disappointed.

A. decided to take him up in the hills to a pine forest where it will presumably be cooler. A. tried to convince Cubby it would be fun to just do some day camping: go up there, cook dinner, play in the forest and all, but come home for bed. Because that way Mommy and Charlie can come too, Cubby! Won't that be FUN!

No, said Cubby. I don't want them to come. I want to camp.

So after naps, A. loaded up the car and I got Cubby dressed in his forest clothes (long pants, long sleeves, and shoes, heat be damned because that child gets eaten alive by bugs if not covered), put together their food package and went outside with Charlie to see them off.

Which is when Cubby decided he wanted Charlie to come too, and Charlie started wailing and flinging himself at the car, desperate to not be left behind. Presented with a united front, A. caved and said he would take Charlie too.

The man is certifiable. Also a sucker*.

A. tried to prepare Cubby for the probability that Charlie would get hysterical at some point and need to be brought home, which would be the end of the camping. I think A. is secretly hoping that will happen, and that may be one reason he took Charlie.

I will be shocked if Charlie stays the whole night there. I expect the car to pull up around 7 p.m. with one hysterical toddler and one pissed-off little boy. Although Cubby constantly surprised me when he was younger with his ability to do things I never expected he would be okay with, so maybe Charlie will surprise me too.

Will he or won't he? Stay tuned to find out.

And in the meantime, I am alone in the house with the air conditioner running upstairs. I plan to retire to my bed with a book and bask in the quiet. Even if it doesn't last.

* Though really, I have to give him serious props for even attempting this. No one could ever accuse A. of not indulging his children.
Posted by Kristin @ Going Country at 1:33 PM 5 comments: