My last trip to the big grocery store in the big village was not a total success. A. had come with me to go to urgent care, thanks to a raging case of strep throat, so he was sitting in the car wilting while I took Jack in with me and raced through the store as fast as I could. In my haste, I grabbed a container of raisins instead of prunes* and a giant container of unsalted peanuts instead of a giant container of cashews.

Damn. What am I gonna do with all those unsalted peanuts?

Hello, homemade peanut butter, my old friend and enemy to my jeans.

I stopped making peanut butter awhile back because it was something I could eat too much of, and I was the only one who ate it anyway. A. categorically refused it, and Cubby wasn't such a fan. So I figured they could eat the Crisco-like crap from the store, and I would be less tempted by that because it's not as appealing to me.

But now I have a pint of homemade peanut butter with maple syrup sitting on my counter, and a hell of lot more peanuts in the jar. At least Jack will eat it. 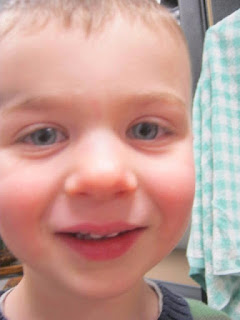 Eat up, son. Your jeans never fit for longer than a few months, anyway.

* Don't give me that look. Prunes are delicious. Would it make you feel better if I called them dried plums?

** Remember when cashews were incredibly expensive? Now they're as cheap and ubiquitous as peanuts. I read the back of a container of them and realized it's because they're now apparently all grown in developing countries. Huh. Nut economics mirror world economics, I suppose.

Labels: all about me, confessions, fun with food, Jack


This unseasonable thaw that has melted all the snow has given me an opportunity to revisit a not-cherished childhood memory: The annual spring poop scooping.

This was a ritual from my Alaska years. We got a dog there, and in a place where it snows frequently and doesn't melt, then the dog's daily deposits just get covered over and hide there until all the snow melts.

It makes for an ugly scene in the spring.

This was not something we had to worry about at Blackrock, because the dogs went pretty far from the house for their toilet times. But here . . . well, old dog Mia is not about to venture too far off the shoveled driveway when there's two feet of snow on the ground. I can't blame her. I don't really relish the idea of a frozen bidet, either.

The end result of this, however, is dog-doo landmines all over the front of the house. So, although I don't much enjoy scooping up and discarding all those accumulated deposits, I did it today. Because you know what I enjoy even less? Cleaning dog poop out of the deep treads of winter boots.

Jack was very helpful during this process. He acted as spotter, standing guard and announcing, "One poo!" until I came over with the shovel for removal.

There were a lot of "one poos" around. But I think I managed to clear most of them. There is now a significantly reduced likelihood of poopy boots to be cleaned. So it was worth it. I guess.