Long version: I took out one the three remaining bags of elk, because I am nothing if not persistent when it comes to using up meat.

This time, I trimmed and cut up the entire bag all at once. This bag must have been the hind quarters, because there was a lot of clean meat without connective tissues. So most of it I cut into thin pieces for the elk bites and stir fry.

The stir fry meat I put back in the refrigerator in a marinade.

The tougher bits I made into chili. It was never above 80 degrees for a delightful change, so I cooked the chili this day even though I knew we wouldn't be eating it this night. Sometimes I'm smart like that.

Long version: I had had a different plan for this night, but then we took our unexpected outing and got home at 5 p.m. At which point I was very glad I had made the chili the day before.

Stop! Photo time! (I hope everyone just heard that in a Hammertime voice.) 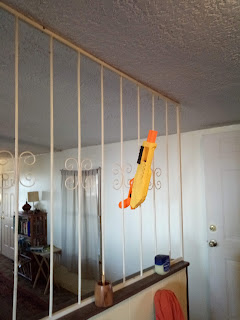 I randomly found this Nerf gun hanging by the front door. Don't worry: It wasn't loaded.

Long version: When I asked A. what he wanted for Father's Day dinner, he immediately said, "Lamb." And when I went freezer diving, I found that the only lamb we had left from the wether was some ribs and one leg roast. Perfect. The leg roast, that is.

I marinated the roast in olive oil, vinegar, and garlic, then roasted it at high heat until it was done. Roasted potatoes and two heads of freshly-dug garlic at the same time. The yogurt sauce was yogurt, lemon juice, crushed garlic, salt and pepper.

When A. ate his lamb, he covered it in yogurt sauce and squeezed the roasted garlic all over it, too, thereby achieving a triple-garlic meat. Perfection. For him, anyway.

Long version: Nothing to see here.

Except for another random photo! 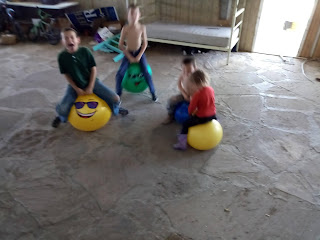 My mom brought one of these bouncy ball things for each kid, with the result that at any given time there are four shrieking blurs ricocheting around the enclosed porch.

Long version: The time had come to use the marinated elk meat. I actually used all fresh vegetables in the stir-fry this time--carrots, mushrooms, broccoli, onion, green beans--both because I actually had them and because I'm out of frozen stir-fry mix. Gotta re-stock on that.

Long version: I had half a can of tomatoes in the refrigerator that needed to be used, plus a few slices of the lamb roast, plus the remainder of the pesto from the previous Thursday. So, I made a marinara sauce with the tomatoes and some of the pesto, then heated the lamb up in that and melted some asadero cheese on top.

I saved a little of the pesto and Parmesan from the pasta to put on the leftover cauliflower, and you know, it was really almost as good as the pasta. I mean, nothing is really going to be as good as pasta, but it was satisfying enough as an accompaniment to the meat.

For me, that is. Pretty sure the kids wouldn't agree.

Long version: "Boiled potato chunks" probably doesn't sound too appealing. What if I told you that they had half a stick of butter mixed into them? Yup. They were good.


I saw this question around on Twitter somewhere, and I was intrigued by it: If you were to build a house on two acres for which money was no object, what five features would you insist upon?

Number one will probably surprise no one: a garden. But not just any garden. I want a walled kitchen garden. Like this: 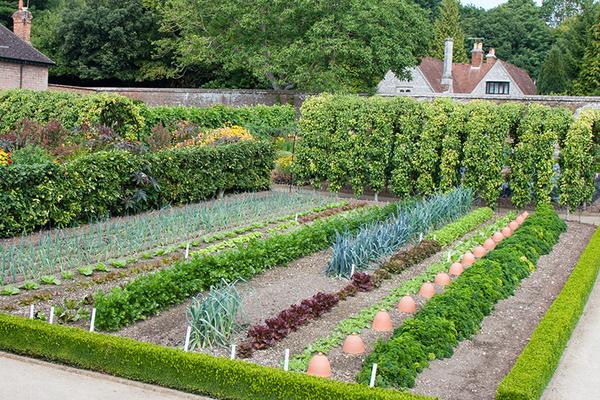 Be still my heart.
(This is West Dean, in England, and the full gallery of photos is here.)

I have always wanted one of those walled gardens with the espaliered fruit trees and tidy rows. And of course, were I ever to possess such a thing, no weed would dare show its face in those perfect rows.

Number two: A sort of butler's pantry just inside the house when one comes in from the garden. I don't know if butler's pantry is quite the right word, but what I mean is a small room with lots of counters and shelves, and a big farm sink. This would be so handy to have for things like butchering and cleaning produce and storing large canning pots and so on. And, you know, having a place to store extra food that is not the floor around my woodstove.

Which leads us to number three: A proper laundry room off the pantry, with an easy-to-clean floor and a place to store brooms and things. This would lead to . . .

Number four: A kitchen of my own design, with a really, really nice range. I have probably the world's worst range right now, so this has been on my mind lately. I don't necessarily need a really big kitchen--what with that handy pantry I would also have--but I would like to have a good range. And a bigger refrigerator. And maybe a wood topped island.

The kitchen could be its own entire post. But moving on.

Number five: A small library room. I wouldn't really want a huge library, just a small room with shelves for books and a comfortable chair with a reading lamp. Plus a soundproof door with a lock on it to keep my children out.

Just kidding about the door.

Okay! Now tell me: What five things would you have in the house of your dreams?

Labels: all about me, confessions, domesticity, randomness

I decided on Saturday that perhaps the children would like to do something other than watch A. and me water the garden and move sheep fences. Jack had recently expressed an interest in shooting the BB gun, and Cubby always enjoys target practice, so we went to the nearby village that has a shooting range.

A. took the shooters to the range. Poppy is too young to shoot, although I have no doubt she'll be all about it when she's old enough. Charlie has no interest in shooting guns. He prefers bows, but all his arrows are broken right now. So I took Poppy and Charlie to the playground while the others were at the range.

This playground is a nice one because this village actually has sprinklers for it. Meaning there is grass. This is a rarity around here, and the children were suitably impressed at the soft springiness at their feet. And the fact that if they fell, they didn't rip their knees up.

There are also a lot of shade trees. Good thing, because this playground is definitely old school, by which I mean that the equipment is mostly metal. That would be a real danger to bare skin if it was out in our brutal sun all the time.

As it was, the metal slide had only been in the sun for a little while, so it wasn't skin-burning hot yet. 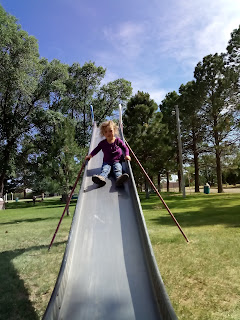 Slides used to be a lot higher. You don't see these on modern playgrounds.

There's a big metal turtle at this playground, too. The kids always want to climb on it. Luckily, it was still in the shade. 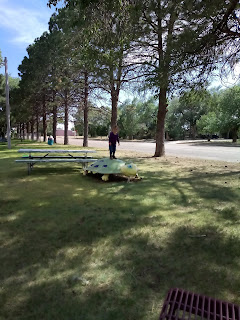 I didn't take a close-up, because the paint that's run all over the turtle gives its face a definitely creepy expression.

Cubby and Jack showed up about forty-five minutes later, and everyone enjoyed their unexpected time away from our house.