The Difference a Day Makes

Yesterday: Sunny; fifty degrees; melting snow; snowdrops poking up through the sodden soil; Cubby stomping around on the lawn in his new shoes.
Today: No sun to be seen; 25 degrees; blowing snow; snowdrops covered up in an inch of snow; Cubby stomping around the living room in his socks.
Upstate New York in February: It's a crapshoot.
Posted by Kristin @ Going Country at 7:50 AM 6 comments:

We eat a lot of meat. I'm sure that comes as a surprise to exactly no one. But I was somewhat taken aback yesterday to realize that we actually have a relatively small amount of meat left in our big chest freezer. I did a quick inventory yesterday when I went freezer diving for something for dinner. I found the lamb is pretty much gone, except for a couple of packages of kebab meat, one roast, and the kidneys (EW). We had two lambs butchered in October and ended up with about 70 pounds of meat in the freezer from them. Of which probably four pounds remains.

And the half a cow that we stuffed in the freezer at the beginning of May last year? Of that approximately 500 pounds of meat, about 50 pounds remains, mostly in the form of stew meat, ground beef, and a shitload of liver (EW AGAIN) and suet. Oh, and two ENORMOUS prime ribs. The MiL needs to have a dinner party.

So let's do a little calculation, rounding out the numbers for my math-challenged brain: If we say our "meat year" started in May of 2010 and eventually included 600 pounds of meat, and we have about 55 pounds left . . . That's 545 pounds of meat consumed in the last nine months.

That doesn't count the fish A. catches that we eat or the very occasional pork or chicken that we sometimes buy. If I may be permitted a very obvious statement, that's a lot of meat.

At least we don't have to worry about iron deficiencies.
Posted by Kristin @ Going Country at 4:53 AM 8 comments:

What Do You See?

Cubby and I play a game almost every day that goes like this: I'm sitting on the couch, he's running in his stiff-legged way around the living room when all of the sudden . . . WOE and WHINING and SCRABBLING AT MY KNEES FOR COMFORT. At which point I cleverly deduce that he's ready for a change of scene.
So up I pull him onto the couch, where he can stand and look over the back of the couch out of the window. And then I say, in the cheery, repetitive manner of a children's show host, "Let's look outside, Cubby! What do you see? Do you see . . . snow? Do you see . . . trees? Do you see . . . the lake?" And so on. If he's looking out the bay window, the list may include the lilac bush, the barn, the stone wall, the dogs, whatever. Sometimes, when we're really lucky, we see a squirrel.
Hey, I didn't say it was an exciting game. Though it does distract him for five minutes, which is pretty much the sum total of my day: five-minute distractions until bedtime.
ANYWAY.
It occurred to me that this would be a very interesting question to pose to the general public. That is, you. I assume you will not need the prompting I must give to Cubby.
So, duckies, let's look outside! What do you see? A parking lot? Your garden? Your neighbor wandering out to get the newspaper in his underwear? What's outside your window?
Posted by Kristin @ Going Country at 5:20 AM 18 comments:

Keeping Up with the Random Parents in the Waiting Room

I took Cubby to the pediatrician again yesterday for his one-year vaccinations, since he was finally ABSOLUTELY AND WITHOUT A DOUBT one year old. We waited for about fifteen minutes in the waiting room, playing with the grimy toys and staring at the other people who came in.
Okay, only Cubby stared. I have better manners than that.
One of the other children who came in while we were there was a little girl who, I learned from her parents, was named Amber and also turned one last week. I was talking with the parents, as parents of children do when thrown together, mostly providing one-word responses as mom talked away a mile a minute with occasional contributions from dad across the room.
I said something to Amber about her pretty shirt, her mother said it was a gift at her birthday party last week . . . You know, the sort of idle, meaningless conversation complete strangers engage in. And then dad yells out from across the room, "We just spent four thousand dollars on her for Christmas, and then another thousand for her birthday."
Uh.
I mean, how does one respond to that? I think I said, "Wow." That seemed safe. It was not a "Wow, that's great," sort of wow. More of a "Wow. That might be the most ridiculous thing I've ever heard," kind of wow. Because frankly, I think spending four thousand dollars on anything other than, say, life-saving surgery or a car is pretty stupid.
ANYWAY.
After some more explanations from dad about the multitudes of toys and clothes Amber got for her birthday, the conversation turned, at some point, to dogs. Amber, apparently, loves dogs. She particularly likes their big dog. I asked what kind of dog it is, mom replied it's a golden retriever . . . and then here comes dad again from across the room, "How much did your dad spend on that dog, honey? A thousand dollars?"
Is there some kind of social disorder that causes people to compulsively blurt out the price of everything? Because that guy had it.
The oddest thing was that this couple was maybe twenty years old, and as misleading as appearances may be, I would have bet money that neither of them had what you might call high-powered jobs. But even if they DID, four thousand dollars? For Christmas for a one-year-old child who has no idea what's going on and won't even remember?
Well. It takes all kinds, I guess. I'm sure Amber will appreciate her parents' generosity after the fact. And even if she doesn't remember, it doesn't matter--her dad will tell her all about it.
Posted by Kristin @ Going Country at 4:42 AM 11 comments:

Items of apparel I put on Cubby every morning:

For a total of eight items of clothing.

Items of apparel I take off of Cubby every night:

See above, except minus the Onesie. For a total of seven items of clothing.

Items of apparel I put on Cubby every night:

For a total of five items of clothing.

That's 20 items of clothing I'm dealing with every single day to keep Cubby clothed and warm. How depressing to contemplate.

Is it spring yet?
Posted by Kristin @ Going Country at 5:32 AM 6 comments:

Because I Love You

Happy Valentine's Day, my lovelies! As a token of my affection for all of you, allow me to share with you a few photos from Cubby's fete on Saturday.

Please, don't be too effusive in your thanks. It will embarrass me.

First up, the obligatory Cake Shot. Now, we did break with tradition here in that we did not feed Cubby his first piece of birthday cake in full view of the assembled crowd, allowing him to smash it to mush and smear it in his hair to the general amusement of the party.

Mostly we did not do this because A) I didn't really want to have to change his clothes and swab him down mid-party and B) There were so many people in the dining room (clustered around the woodstove, actually) that there was nowhere to sit with him. So we brought him into the living room for his cake and A. fed it to him. He had chiffon cake with strawberries and whipped cream. He thought it was okay. 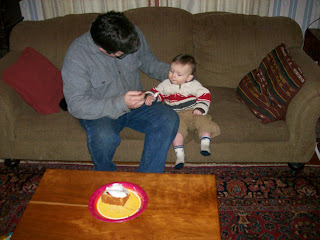 Actually, he thought it was AWESOME and dug his little fingers right into the whipped cream. Whose idea was it to feed him on the couch again? Oh right, mine, because I am smart. Whipped cream wipes off pretty easily, though.
Next! Evidence that the ratio of males to females in this county is going to be VERY HEAVILY in favor of males in the coming years. We should all take protective measures now. 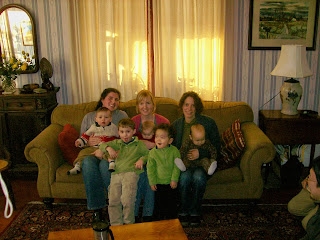 The children? ALL BOYS. The mothers: TOTALLY OUTNUMBERED.

So many sons.
I have a few shots as well of the fathers holding the boys on the couch. It's a whole mess of testosterone. Also a study in motion as NO ONE was sitting still. Which is what happens when you get a whole bunch of boys together, as we all know. So those photos are pretty bad. But because it is Valentine's Day and because I love you, I will post one anyway. 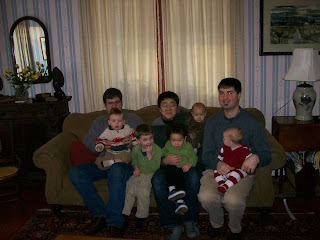 You can tell I took this picture because it is dark and terrible. You're welcome.
I hope you've enjoyed our little picture show here. Have a very happy Valentine's Day, poppets!
Posted by Kristin @ Going Country at 4:48 AM 6 comments:

Photos from yesterday. I'm not on my computer now--I'm on A.'s office computer--so I can't access the photos I took off the camera. But be assured they are coming, and they are cute. I mean, how could Cubby wallowing in whipped cream or a couch full of boys under the age of four not be cute, right? Right.
Everyone seemed to have a good time yesterday. After some people called to say they couldn't make it, we ended up with 26 people in the house, five of whom were the aforementioned boys under the age of four. What is with all the boy babies? Is there some kind of Y chromosome that seeps into the ground water around here? Weird.
There was plenty of food (and plenty left over--yay for no cooking today!), plenty of gifts for Cubby, and plenty of cake. I deem Cubby's first birthday party a success.
Posted by Kristin @ Going Country at 6:55 AM 4 comments: