Let's start with my own pathetic little lamb, Charlie, who looked more like the sacrificial lamb after falling off the arm of a chair and face-planting directly on the wood floor. He bit through his chin. Or right below his lip. Whatever that spot is called.

At least, I think he did. There are definitely teeth marks on the outside of his face, and there was a whole hell of a lot of blood pooling inside his mouth, so I can only surmise that particular injury is a result of the teeth going through.

I don't know. It was gross and bloody and what with his habit of sucking on his fingers when he's upset, there was a lot of smearing around of drool and mucous and blood on his face by the time the fireworks were done.

I read once on someone else's blog who has three boys--and thus has a lot of experience with bloody boo boos--that unless you can see light through the wound (OH GOD GROSS), no stitches are given for this kind of thing. A quick Internet search while holding the bloody baby on my lap confirmed that only "gaping" wounds (STOPIT) of this sort are deemed stitch-worthy.

I never, ever want to see that kind of wound.

Lookit what I got a picture of! 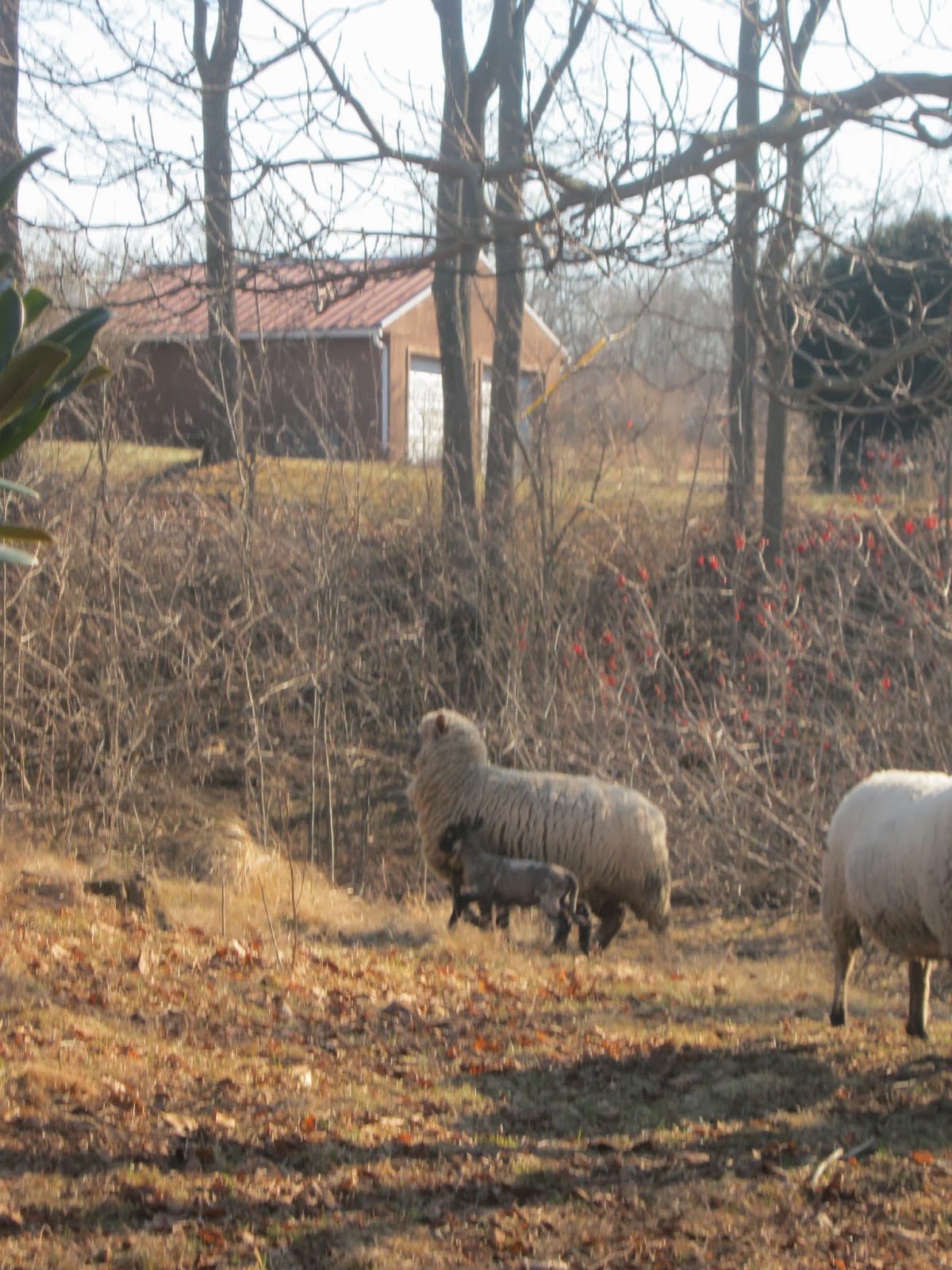 LAAAAMB! You can kind of see it, right?

The reason I don't have a better picture is because that sheep ass to the right there belongs to the ram. Charlie and Cubby were with me at the time, and Charlie was determined to charge straight for that lamb. And the ram. So I had to take the picture quickly and then vacate the pasture, because charging at a ram will get you a lot more than a fat lip.

Sometimes It's Okay to Forgo Photos

How are your counting skills, my lovelies? Probably better than a certain almost-four-year-old I know, who is convinced that eleven comes after six. I can sort of see the confusion: Eleven, seven . . . they rhyme.

Point is, it's time to start the lamb count. Yup. The first lamb of the season was born two days ago, so the current lamb count: One--a male. And eleven ewes left to deliver.

I do not have a photo of what is reportedly a very jolly black lamb. I say "reportedly" because I haven't even seen it myself yet. What? He's ALLLL the way (fifty yards) in the upper barn. And it's muddy out there. And I have a cold. Wah.

You will, perhaps, be more forgiving of this photo-less update, however, when I tell you what else we have hanging around that I also did not photograph. Literally hanging--in the shed--are the two lambs that will need to be cut up this weekend. I don't have pictures of them, either, but as they're significantly less cute than a newborn lamb, I'm sure you don't mind.

I also don't have pictures of last night's butchering. A. continued his bloody theme by butchering two random roosters given to us by a co-worker of the MiL's. This is the same woman from whom we got the asshole rooster last summer. She had three more roosters from eggs hatched in the spring, which is of course two too many, but she couldn't find anyone to take the extra chuffy two (IMAGINE THAT) and she couldn't bear to butcher them herself. Tired of the havoc (and injury) these roosters were creating in her otherwise peaceable flock, she hired out A. as a hit man. A hit man paid in free-range chicken. There are worse payments.

Works for us. We're almost out of chicken stock.

So A. skinned and gutted the roosters last night, and THEN he got to work skinning the raccoon he caught a couple of days ago.

Now aren't you glad I don't have pictures, after all?
Posted by Kristin @ Going Country at 4:25 AM 6 comments:

My mother was determined for my birthday present this year that I should get shoes. She wanted to take me shopping while we were in Tucson, and I mentioned I needed some casual black shoes, so that became her mission.

SuperNana was foiled by Charlie the Incredible Clinging Baby, however, and we never did go shopping.

However. I noticed that the ankle boots my mother was wearing were very nice. I liked them so much, in fact, that I told her I would just get those.

Yeah, I wear the same shoes as my mom. I'm okay with it; she's quite chic.

That particular brand and style were no longer to be had at the local stores in Tucson, however. Internet to the rescue! I ordered them, they arrived last weekend, and then they sat in my closet because mine is not a life in which I can wear my nice shoes on a whim. No. This requires planning.

Actually, what it requires is leaving the house, because there's no sense putting down good money for nice shoes and them ruining them entirely with mud. And sheep shit. And road salt. And more mud.

So I had to wait until I went somewhere, and then there also couldn't be six inches of snow on the ground.

But today was the inaugural voyage of the booties! Hooray! I had to take Cubby to preschool this morning and there was only miserable rain, not snow, so I wore them. I even fashionably cuffed up my jeans* so the stylish shoes were visible. 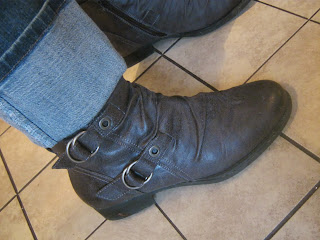 I'm sure the other preschool parents were very impressed. (Also, it is very hard to take pictures of one's own feet. Alsoalso, this picture is mostly for my mother, so she can see that I am very much enjoying my birthday present.)

As I was driving home in my adorable new booties, I made a mental list of the things I wanted to do when I got home. That list included hacking up and cooking another of the enormous blue squashes so I can make some more fake-pumpkin almond bread, and rendering some lard.

I have the shallow interests of a celebutante combined with the hobbies of a homesteader. This amused me.

When I got home, I traded out my fashionable footwear for my manky old slippers and got down to it. 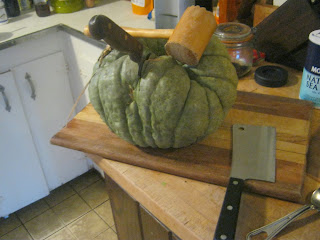 This photo is also for my mother, who once asked how I even manage to prepare a squash that large. Here is the answer: cleaver; wooden mallet; large, dangerous knife; and berserker rage. 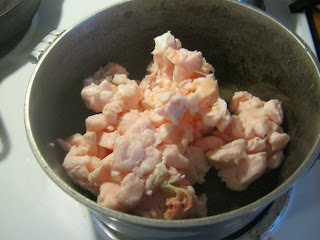 THIS photo is for my father, who loves nothing more than the sight of squishy animal fat. (J/K! My dad is a former vegan who still does not so much dig animal bits. You're welcome, Dad. Love you!)

And, uh, that's it. My morning thus far: new shoes, squash, and lard. That pretty much covers it.

* No, they were not skinny jeans, because I'm not THAT fashionable. Or delusional about my own non-skinniness. And okay, I mostly cuffed them so the hems of my jeans wouldn't get soaked with muddy water, but let's just pretend I'm fashionable, okay?
Posted by Kristin @ Going Country at 8:05 AM 3 comments:

Labels: all about me, family, fun with food, randomness

During the latest cold snap, Cubby started complaining that his bed was cold when he got in it at night. His room does get some heat, but it's not exactly a tropical paradise in there, so yeah, the sheets were maybe a little chilly.

Now, I know all about the particular discomfort arising from cold sheets. So when Cubby requested that we get him a heated mattress pad like ours, I was stricken with guilt.

I was not so stricken, however, that I failed to realize the consequences of an electric mattress pad in Cubby's room: plugs pulled out, electric wires dissected from the fabric, inevitable chaos and disorder.

So that's a no on the electric pad.

But then I remembered the soapstone.

God only knows how old the soapstone is. It's been around here for at least a hundred years. It looks just like this. Soapstones are large rectangles of, uh, soapstone, which is a stone that heats up fast and cools down slowly. This heat retention makes it a perfect bed warmer. The soapstone is put on the woodstove to heat up, then wrapped in an old t-shirt and laid on Cubby's bed while he brushes his teeth. This creates a little hot spot in the middle of his bed. It's not much, but it's enough to have a good psychological effect anyway.

The other antique floating around that's been pressed into service of late is a pair of old silver candlesticks. I use them as boot racks for Cubby's waterproof winter boots when he crashes through the ice in the stream up to his waist and fills his boots with water. The only way to dry them in less than a week is to put them over the forced-air heating vent in the living room. The boots go upside-down over the candlesticks and dry overnight.

Whatever we need, Blackrock can supply. Albeit in a weird, antiquated way.
Posted by Kristin @ Going Country at 5:36 PM 5 comments: