I never buy cereal. Never. Ever.

It's not that I don't like it. In fact, I like it quite a bit. So do my children. It's more that they (and I) will eat great quantities of it and still be hungry an hour later.

What a waste of money. And time, because then I have to make more food for them.

But we have guests arriving today, and I thought possibly I should have something in the kitchen that could just be opened and eaten without any prior preparation.

(This, by the way, is A.'s fondest and most-unattainable dream: Finding something in the kitchen he can just put in his mouth.)

So I bought some Cheerios.

They've been sitting in the pantry all week, but I remembered them when I realized I had bananas, blueberries, and fresh strawberries we found at an Amish farm yesterday, but sadly no yogurt. What else could I do with those fruits for breakfast?

Hey, kids! Big treat for breakfast this morning! Cheerios with your choice of fruit, WHEE!!!

" YAY!" said Charlie. "This will be my first time eating Cheerios at home."

I know, son, I know. You can tell your future therapist all about your deprived childhood.

They each had two bowls. 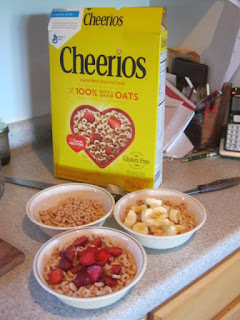 This could be an advertisement for Cheerios, except that I started out by saying they were a waste of money, so I don't think General Mills will be contacting me for an affiliate deal anytime soon.

Speaking of those guests, we're expecting my sister, brother-in-law, and niece. Finding room for three more people to sleep in this two-bedroom house is significantly more difficult than at eight-bedroom Blackrock.

No worries, though. I've got it covered. As long as guests are willing to sleep on the floor of a kids' bedroom with stacked-up bed frames. 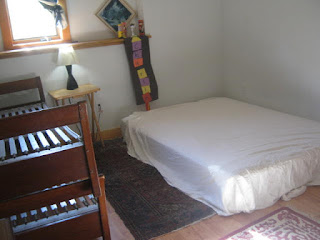 And on a fold-out couch in the downstairs playroom that has no door to shut out the noise of three small children and two adults that wake up way too early. 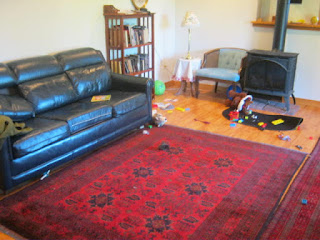 I will at least clear out a few stuffed animals and a few dozen building pieces. Because I am ever the gracious hostess.

And as long as my kids can manage to all camp out in the laundry room for three nights and actually sleep. 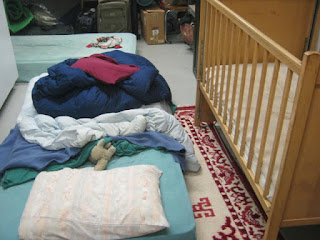 Really, who wouldn't find this relaxing and conducive to deep slumber?

A Journey to Find Roots (and Soda)


My dad discovered shortly after we moved here to the Canadian border that his great-grandfather actually immigrated to the U.S. from a community in Quebec that's only about 40 minutes from our house. We found this a funny coincidence, and A., who is more into family history than I am (probably because he actually knows all of his family history, as his family on both sides has lived in the same place for hundreds of years) wanted to go take a look at the place.

So we went on Saturday.

It was a very spontaneous trip. We didn't even leave until after Jack woke up from his nap at 3 p.m. We did find my ancestral village. It's actually pretty trashy and creepy, and I think A. said it best when he remarked that it was a good thing my ancestors left. We found the cemetery with some gravestones of people with the family name, although I'm not sure exactly how they're related to me. 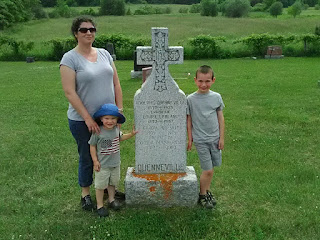 Charlie is not in this photo because he was sulking in the car after staging a really spectacular post-car-nap meltdown. He didn't miss much.

Up to this point, none of the children had been too impressed with our journey to find our roots. They were bored. And hot.

So we went to the beach. 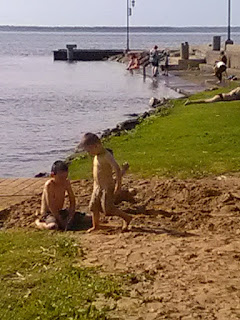 With ten square feet of sand and everything.

What we actually did was drive a few minutes to see the St. Lawrence River, and then stumble upon a public park with a small beach. Perfect. A. had mentioned before we left that we might go to the river, so I of course brought extra clothing for the children. Because any time you bring children into close proximity to water, you'd better have extra clothing.

Except I forgot Cubby's, so after we were done at the beach, he had to sit in the car in his T-shirt and underwear while I hung the Classy Flag of Drying Shorts out my car window on our way to a restaurant for dinner.

The restaurant we stopped at was one just on the Canadian side of the border very close to our house that's well known for their French fries. And, of course, poutine. Because that's what French fries are for around here: drowning in cheese curds and gravy.

I myself am not a fan of poutine--why sog up perfectly crispy French fries?--but I am a fan of French fries. Because this was our big day out, I even got a can of soda for everyone. Usually I'm totally Unfun and get the kids water or juice, or, if they're really lucky, one soda to share. Because does a two-year-old need 12 ounces of corn syrup? No.

But this time they each got their own 7-Up. Based on the excitement this generated, you would have thought they'd won the lottery.

Turns out, it's just that easy to make lasting memories. When I asked the kids what their favorite part of the trip was, they unanimously said the beach and the soda.

Labels: all about me, Charlie, Cubby, family, Jack, the A team, travelin'

Quality time with his scythe: 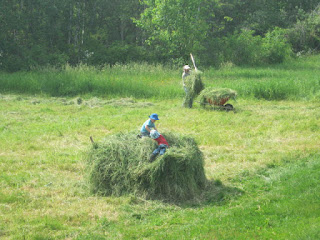 Cutting and stacking hay is where it's at for summer fun.

And Mass: Coming right up.

Happy Father's Day to A. He's not like any other dad I know, but he sure does do up this fatherhood gig in his own inimitable style. 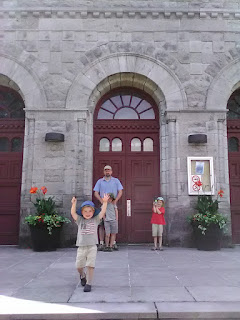 * What he got? A lame e-card and probably a phone call later. Celebrating in style as always, that's me.