I really have nothing more to say about that. At least, nothing that doesn't involve several naughty words. 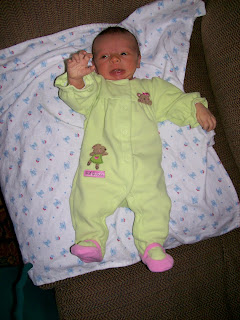 I think this face says it all for me, anyway.
Posted by Kristin @ Going Country at 6:18 AM 10 comments:

And Two Steps Back

Yeah, those snowdrops A. saw peeking hopefully out of the ground the other day? They're now covered with a foot of snow. And it's still snowing. 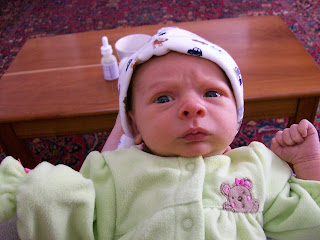 Cubby is not amused. Me, either.
Posted by Kristin @ Going Country at 6:35 AM 15 comments:

A. reported the first sighting of snowdrops yesterday in the flower beds near the dining room door. I haven't seen them myself, since I rarely venture out the door anymore. But I am greatly heartened by their appearance as a signal that maybe, sometime, in the distant future, all this goddamn snow will abate and we might actually see some green again.

Can you tell this is a bad time of year for me?

One of the visitors who came to see Cubby* was reminiscing about when her daughter was born. Her daughter was born in March, and this woman's memories of that time are of sitting and nursing her daughter while she watched the buds form and open on a flower bush outside the window. What a lovely image. MY memories of this special time with a newborn Cubby? Snow. And more snow. It snowed literally every day his first week of life, and almost every day the week after. No wonder he had to go under the lights.

But no matter how much more snow we get, there are those snowdrops and the promise of spring. It always does come, even though winter seems like it will last forever.

* Incidentally, if you want to feel really popular, have a baby. Seriously. We've had visitors almost every day. Of course, they're not coming to see ME, but I can pretend.
Posted by Kristin @ Going Country at 6:19 AM 6 comments:

Labels: all about me, country wisdom, Cubby, weather

I don't think I've ever mentioned here that the first date A. and I ever went on was to the Ostrich Festival in Chandler, AZ. Appropriate, considering the wide variety of festivals and fairs A. has hauled me to over the years since. Also appropriate because it was there that I ate ostrich, which is on my list of Odd Foods I Have Eaten.

It is no coincidence that all my Odd Foods have been courtesy of A. I wasn't a very adventurous eater; I'm still not, actually, when left to my own devices. But A. delights in the strange and faintly gross. As you might remember. Anything meat-related, he's down for. It is due to A.'s fascination with trying what Anthony Bourdain termed "the nasty bits" that I have eaten lamb tongue, deer heart, octopus, squirrel, and liver*.

You've been missing your Audience Participation Days, haven't you? You feel the need to talk to me, don't you? I thought so. So tell me, duckies: What's the weirdest food you've ever eaten?

* Okay, so liver's not really weird, but I do count it in the Gross category.
Posted by Kristin @ Going Country at 7:27 AM 26 comments:

Labels: all about me, fun with food, randomness, the A team

How Life Has Changed

I got four hours of sleep in a row last night. Four hours. Consecutively. This is the first time in two weeks I've slept longer than three hours at a stretch. It was very exciting.

Of course, not even this unaccustomed luxury was enough to keep me from forgetting to put the diaper cover on at the 3 a.m. diaper change, leading to Cubby waking up soaked with urine at 6 a.m. Oops.

Sorry, kid. But thanks for the four hours.
Posted by Kristin @ Going Country at 6:18 AM 6 comments:

A Rebel from Birth

Today was the day the doctor said someone should be born. 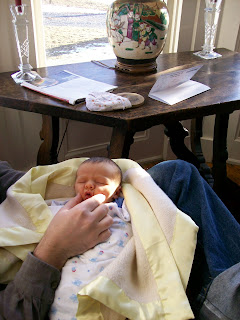 Yes, Cubby is technically full-term today. We've had 11 days to observe this new small person and we have learned a few things already.

1) At the risk of sounding like one of those annoying parents who believes their child is above average in every way, I really must say that I think he's kind of freakishly strong. Granted, "strong" for a newborn means he can do exciting things like hold his head up for two seconds and bring his hands together in front of his face. But these things are actually mostly earmarked for several weeks down the road, so I think this may be an indication that the boy has inherited his father's frightening strength. This pleases me. It means that in a few years, he can be the one to hold the other end of whatever crazy heavy object A. decides to move. I'm retired.
2) Cubby does not really deal in the quiet, pathetic cry. Cubby believes the best way to broadcast displeasure is to SHRIEK IN RAGE. That said, he doesn't cry much. Mostly when we have the temerity to change his soaking wet diaper.

4) Once, in a spectacular display of bad timing, he managed to pee on his own face when I was changing him. I laughed at him. This may qualify me for the Bad Mother Club, but somehow it seemed only fitting that the perpetrator of so many urine-related indignities should get a taste (literally) of his own medicine.

And finally, though this has less to do with Cubby and more to do with me . . .

5) I never could have imagined what a thrill it would be to get back into my regular jeans and out of those irritating maternity pants. No more droopy drawers. Thank God.
Posted by Kristin @ Going Country at 7:15 AM 17 comments:

Labels: all about me, baby stuff, confessions, Cubby, family, the A team

I'm doing pretty well with this baby thing so far, if I do say so myself. I'm not walking around in some semi-somnolent state, running into doors and dumping salt in my tea instead of sugar. I'm not sobbing hysterically at 2 a.m. or screaming obscenities at diapers that refuse to do what they were designed to do--namely, contain pee*.

What I AM doing, however, is slowly losing the function of my right arm. See, I'm very predominantly right-handed. So I'm hauling around this child with my right hand and arm all the time, positioning him for feeding, holding his head up when we're sitting, cradling him when we're going up the stairs. He's not a big kid by any means--still in the seven pound range somewhere--but MAN. This is not good for my hand and arm. My hand is feeling somewhat arthritic, kind of tingly and numb sometimes. And my arm developed what I assume is a charley horse yesterday that pretty much rendered it useless until A. rubbed it with some force to get the kink or whatever it was out of my upper arm and shoulder. OWWWW.

No one ever mentioned this part of the conditioning process. So anyone out there who is planning on having a baby soon? Break out those dumbbells and start lifting. Your shoulders will thank you for it in the end.