Yesterday around four in the afternoon, a friend of A.'s called to let us know he saw huge numbers of swans on the lake just south of our beach. So of course, even though it was snowing, we crammed Cubby into his snowsuit and hightailed it down to the beach to see for ourselves. Because snow or no snow, when else will we get the opportunity to see almost a hundred swans on the lake?

It was pretty magical, standing there on the beach watching almost a hundred swans floating so near, the snow drifting down in big flakes. The MiL, who came home in time to see them too, said the swans were tundra swans. We'll take her word for it.

I took some photos of the swans, but they were kind of far away, and, well, white against a gray lake obscured by snow. So I think this is a much better photo to leave you with. 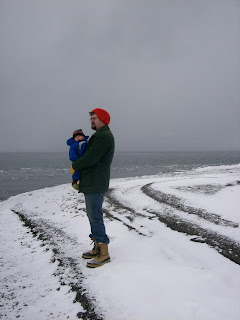 This kid has no idea how lucky he is.
Posted by Kristin @ Going Country at 11:46 AM 3 comments:

Eight years ago I was living in a shitty studio apartment in Phoenix, Arizona, where the police came to my neighbors' door with guns drawn after a "domestic disturbance" and gunshots were not at all uncommon at night.
Last night, I helped A. corral Donnie the Ram so A. could give him a shot of penicillin.
This morning, I called the Sheriff's department to go take care of a wounded deer the MiL saw on the side of the road on her way to work.
I'm a long way from that apartment in Phoenix.
Edited to add: As final, incontrovertible evidence, allow me to share that I just went outside to find Mia with one of the most gruesome assemblages of deer parts I have ever seen. It was an entire exposed rib cage, with the neck still attached. And the head. Which Mia was gnawing on avidly. Welcome to the country.
Posted by Kristin @ Going Country at 6:16 AM 6 comments:

3) Cleaned the ashes that have accumulated over the past month or so out of the woodstove.

4) Dusted the dining room, because those ashes, man. They get EVERYdamnwhere.

6) And some orange juice.

7) Sorted through the towering piles of magazines/newspapers/books/mail/random shit that accumulates on the table in the corner of the dining room. That table makes me crazy. If only we weren't all so damned literate, we would have a lot less clutter.

8) Straightened up generally in the dining room. How many pairs of gigantic, messy boots does one man need? (The answer, apparently, is four.)

9) Printed out tax documents from our bank.

11) And here I am writing a (half-assed and admittedly somewhat lame list-type) post!

All things that are significantly more difficult to do with a 50-pound toddler in tow.

P.S. Yeah, he's definitely a toddler now. I can no longer deny it.

P.P.S. I don't actually know that he's 50 pounds. That is possibly some exaggeration. But we'll find out at his one-year appointment next month!

Labels: all about me, Cubby, domesticity, randomness

I KNOW. How fun is THAT?

Okay, not that fun. And technically, they're not really new, as I got them at the Salvation Army. But they are new for me, and they're not at all worn-looking, so I'm calling them new.

I'm also calling them a damn miracle, because good LORD, what is UP with jeans these days?* I mean, I spent a good 45 minutes in a Real Store (that is, one in which the merchandise has presumably never been worn--except by every other person who has tried on that article of clothing--and the price tags aren't stapled on) looking for a pair of jeans. And out of probably ten pairs I tried on, they were all . . . weird. Weird pockets; weird dye patterns; weird shades of blue; weird skinny jeans that I cannot wear because I am not 16 or, um, skinny; weird "boot-cut" that looks more like bell bottoms.

FYI, jean manufacturers? Boot-cut jeans are supposed to fit over cowboy boots, not, like, mukluks. Please see Wrangler jeans for an illustration. Thank you.

After that unsatisfying experience, I went to the Salvation Army to pick up some more sweaters for Cubby and decided I might as well look at the jeans while I was there. And I found a pair of normal jeans in my size with no weirdness whatsoever. The three-dollar price tag was merely a bonus.

* I realize that any statement qualified by "these days" makes me sound like an irritable 85-year-old woman. What's your point?
Posted by Kristin @ Going Country at 5:48 AM 8 comments:

Funny Thing About that Sun

Yesterday was a sunny day. In the winter, this always means some very cold weather. Because the clouds are what trap any small bit of warmth there might be, like putting a blanket over the whole land, and then when the blanket is taken away, off goes all that warmth and in comes the cold air.
BUT.
We have gotten to the point in the year in which the sun is starting to have a little bit of heat to it. So it was 15 degrees yesterday, but I still put a hat on Cubby and took him outside with me to sit in the sun and watch the dogs frolic for 10 minutes or so. I figured we'd better get our vitamin D fix while we could, as the forecast for the foreseeable future involves nothing but clouds and the chance of snow. I also figured we'd better take advantage of any small opportunity to get out of the house and those same four rooms that have been traversed approximately four thousand times.
It was a nice little vacation. Back to the clouds (and those four rooms) today.
Posted by Kristin @ Going Country at 4:47 AM 4 comments:

We are in the middle of exciting weather, duckies. Four degrees below zero with a slight wind as I write this. And snowing.
A. has been positively atwitter with excitement for days, anticipating these unusually low temperatures and the possibility of finally seeing the lake freeze over*. A dream come true for us all, of course.
Yesterday afternoon, he saw from the house that there were actual ice floes in the lake, so of course we had to go down and look. And of course we took Cubby. What? Leave the baby at the house just because it's four degrees with a stiff wind and we're going down to the inhospitable lakeshore? No chance. He may as well learn now what it means to be part of this family. 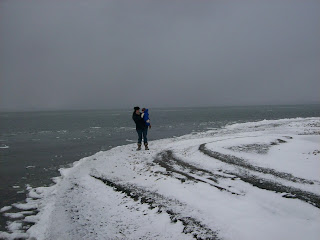 It means you will spend a good portion of your life freezing your ass off. Sorry, Cubby.
* Unfortunately, that slight wind means that he is doomed to disappointment once again.
Posted by Kristin @ Going Country at 6:00 AM 5 comments:

Well then. It appears that Cubby is done with the morning nap. Just like that.

We discovered this yesterday, when I attempted to put him down for his usual nap two hours after he woke up for the day. He certainly gave the appearance of sleepiness. But two hours later, after up and down and standing in the crib screaming and NOT SLEEPING, it became clear that there would be no nap in the near future. It was at this point that I dumped him on A.'s lap and took off for the Small City.

Not because of Cubby's behavior, but because I had already planned on leaving him with A. so I could have a (much-needed) break. And it was obvious that it didn't matter if I was there or not--that child was not sleeping. So I left.

A. told me when I got home that Cubby played quite energetically for another hour, then had a repeat of the screaming and NOT SLEEPING for an hour or so before he finally passed out on A.'s shoulder. After which he slept for over two hours and woke up at 3 p.m. in a much better mood.

I didn't have any great hopes of a morning nap today. Sure enough, although he looked tired, he was not having any of this crib business. I didn't press the issue, instead bringing him back downstairs to crawl around and walk and pull himself up on things and chase cats and eat about four separate meals of eggs/toast/tangerine/cheese/grapefruit/Cheerios/oatmeal/raisins/applesauce/whatever the little piglet can get his hands on until he was tired out around noon. At which point he fell asleep while nursing and went into his crib with nary a sound.

So. Much as I hate to concede the end of any free time I might have in the morning, it seems that the morning nap is no more. Boo.
Posted by Kristin @ Going Country at 10:11 AM 3 comments: