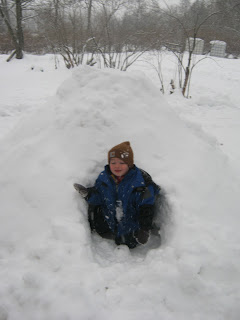 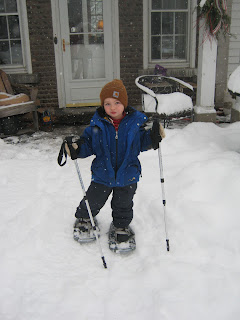 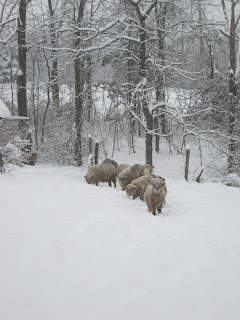 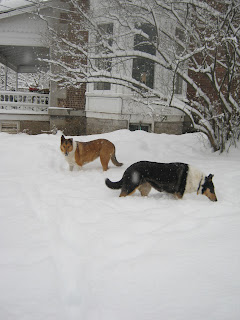 Holy hell, there is a LOT of snow out there, y'all.  And more in the forecast.  Hello, winter.  You came in with a vengeance this year.

A Little Story of Christmas Spirit

As you all know, we just drove a long, long way.  There were many stops along the way for potty visits and coffee and diaper changes and nursing and . . . well, stops.  For stuff.

At one of those stops, at a gas station somewhere in Pennsylvania, I left my wallet on top of the car after a trip inside the station with Cubby to buy him some milk.  When I got back to the car, Charlie was crying and Cubby wanted his milk and I was strapping him in and I just . . . left my wallet on top of the car.  But I did not know this until a stranger named Bridie called my sister's cell phone to say she and her husband had found it in the middle of an intersection and picked it up.

Then she offered to mail it to me.  I told her to use whatever cash was in it to pay for the postage, and then take the rest of it and buy herself a bottle of wine or something for being such a good Samaritan.  She must have gone to the post office on Christmas Eve to mail it, because it arrived at Blackrock the day after Christmas.  All the cash and cards were still in it.

If that is not a Christmas miracle, I don't know what is.

So, to Bridie in Pennsylvania:  Thank you for returning my wallet to me and, in the process, reminding us all that some faith in the goodness of our fellow humans is justified.  Sometimes we need that reminder.
Posted by Kristin @ Going Country at 10:53 AM 8 comments:

Labels: all about me, country wisdom, travelin'

The Glorious Day of My Birth

Remind me next year that on December 27, I do not want to celebrate my 34th birthday by driving eight hours in a car with two screaming children.

Well, only one screamed.  The other talked non-stop.  There was also blowing snow and an ice-covered windshield.

But!  We made it home eventually, and the MiL made us pasta with pesto for dinner.  Plus a chocolate pound cake for my birthday.  The first load of what will be many, many loads of laundry is even now spinning about in the washing machine.  That sound, more than any other, announces to all that I am home.

Coming home is a pretty good way to celebrate a birthday after all.
Posted by Kristin @ Going Country at 6:38 PM 8 comments:

Have a happy day wherever you are and whatever you're doing.  I hope it involves cookies.
Posted by Kristin @ Going Country at 3:27 AM 7 comments:

And I am totally ready to go.  To Virginia, that is.  Glory be.

It never ceases to amaze me that I manage to go from nothing ready to go to everything ready to go in just a couple of hours.  Getting all the shit together that four people need for five days--including a baby, which is an exercise in over-packing if ever there was one--is no joke.

I started packing bags at six o'clock last night.  I loaded the car* in the dark and snow.  I finished loading it at 4:30 this morning.

Everyone is still asleep.  I've taken a shower.  I'm drinking my coffee and feeling much calmer than I did twelve hours ago.  Now I just have to get children loaded up after they awake and we'll be on our way.

At which point I think all calmness will have gone out the car window, but whatever.  Bring on the road trip.  I'm ready.

P.S.  To the worried anonymous who asked in a no-doubt incredulous tone if we were really giving our toddler a real saw?  Yes.  It is a real saw.  And he can really cut wood with it.  Perhaps Cubby is not your average toddler (in fact, I'm SURE he's not average), but there is no doubt that boy is fully capable of handling real tools.  He's probably just disappointed it wasn't a power saw like Daddy's.

* We're taking my Subaru, which is all-wheel drive and has snow tires.  A.'s Roadmaster is pretty good in the snow (he tested it by driving into the Small City during a straight-up snowstorm yesterday to get sheep food), but it doesn't have snow tires and it's still on probation.  Buying an old used car means the expectation that something will need to be fixed on it within the first month.  And we don't want that something to be a radiator hose that leaves us stranded in the snow in the Endless Mountains of Pennsylvania with two small kids. So. Subaru it is!
Posted by Kristin @ Going Country at 3:14 AM 6 comments: