A Reminder That It Can Always Be Worse

When Cubby and Charlie's friends showed up yesterday for a playdate, their mother was quite candid that, why yes, winter break has sucked royally at their house as well. AND, she had a huge bandage on her right hand, covering the 12 stitches she had to get after falling down their stairs on Saturday and ripping her hand open.

She has three kids too, roughly the ages of mine. Those kids do not care if you have an injury; they still demand milk and carrying and everything else.

So I may have three continuously screaming children, but at least I don't have twelve stitches in my hand.

Then, this morning, I got an e-mail cancelling today's playdate with a different family because the baby of the family (almost exactly Jack's age) has some kind of nasty croup thing that's keeping everyone awake at night and her mother really didn't want Jack to catch it. She had to cancel.

So I may STILL have three continuously screaming children, but at least I don't have an exhausted, croupy baby who's keeping me awake all night.

Perspective is a wonderful thing.
Posted by Kristin @ Going Country at 5:10 AM 2 comments:

Labels: all about me, country wisdom, friends, randomness

Let's Hope This Was the Low Point

It rained and snowed and generally made a big, dangerous mess on the roads all day yesterday, thereby rendering me unable to take the children out of the house for Day 2 of winter break. It was a long, loud, acrimonious day.

At 4:45 p.m. I was literally throwing dinner together--throwing random things in a pan with some meat and throwing peeled potatoes in water--while Jack crawled around on the floor at my feet playing with empty beer bottles. Cubby and Charlie were fighting in a chair in the dining room, until Cubby got up and ran into the living room, slamming the door behind him so hard that Charlie couldn't open it to run after him and continue screaming.

So instead he came into the kitchen and cried and screamed at me to open up the door for him. He did this for the last few minutes I was trying to finish up what I was doing. Jack ceased his relatively calm beer-bottle play and remembered that he was teething, so he resumed the forlorn wailing that had been his soundtrack all day.

I finally got all the food going and left the kitchen. I walked straight through the living room with a half-hearted, "Why did you slam the door on Charlie? No, never mind. I don't care," at Cubby as I continued upstairs with Charlie screaming behind me.

I went right into my bedroom with Jack and locked the door.

I was only in there for literally one minute. Just long enough to lie down on the bed and collect myself. Then I unlocked the door, took Charlie's hand (of course he had followed me upstairs--he was screaming outside the door for the entire minute), sat down in the living room, and spent the next half an hour with Charlie in my lap, jouncing Jack up and down on my knees and running through my extensive repertoire of children's songs.

Winter break is continuing to be hell on earth so far.

But! We have friends coming to play today, and we're going to different friends to play tomorrow. Then there's a program at the library on Friday featuring actual (small) wild animals and THEN it will be the weekend. Which means Daddy Time.

The end is in sight. Alleluia, pass the gin.

Labels: all about me, Charlie, Cubby, family, Jack

Yesterday was the first day of winter break for both Cubby and Charlie. Winter break is not something I am familiar with from my own school days, probably because winter wasn't much of a thing where I went to school (Hawaii, Alaska, and Arizona). Except in Alaska, and no one even pays attention to winter there, so no breaks for it.

Winter break is a nightmare for parents, of course, because what could be worse than having your children home all the time during the worst weather of the year? Not much.

So yesterday was challenging. The wind was blowing ferociously, meaning even when I did get Charlie and Cubby outside, they didn't stay out long. Mostly they were inside screaming and fighting all day. And talking about poop.

Needless to say, I was feeling a wee bit desperate by 4 p.m. This desperation led me to suggest they could put on a play for me and Jack. OR, hey Cubby! Want to act out Peter and the Wolf, like you did at school?

He did. So I put on our CD of Peter and the Wolf--narrated by Patrick Stewart, pleasingly--and we all took direction from Cubby.

He ran around setting the scene with a blue blanket on the floor representing the pond, on which was the duck (a stuffed owl), and a table for the tree, in which perched the bird (a stuffed eagle). Charlie got the coonskin cap, because he said he would be Peter. Cubby, as the wolf, wore this strange blanket with a hood and ears that someone sent to Jack when he was born. 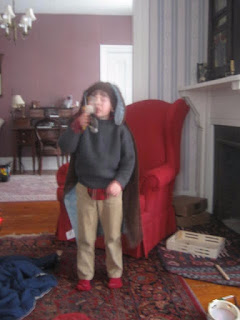 Here's the wolf trying to catch the bird.

Unsurprisingly, Charlie flaked on being Peter after about two minutes. So his understudy had to step in. 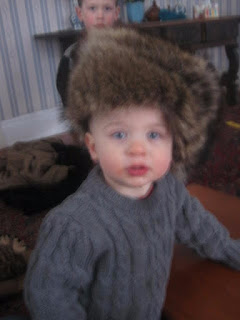 He lost interest quickly too, however, leaving only one option for Peter. 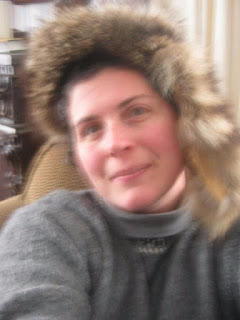 Charlie did deign to be the hunter later. 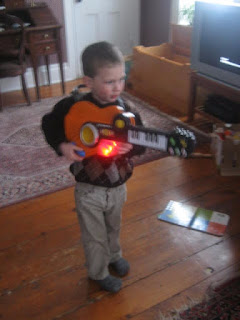 He's an excellent shot with his toy guitar.

The procession after the wolf is captured and imprisoned was a little odd. 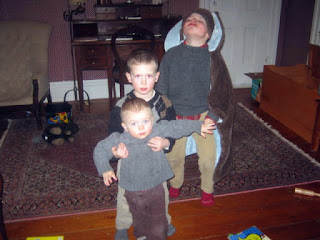 Jack as Peter again needed some help processing from the hunter, and the wolf does not look appropriately chastened. Or imprisoned.

Oh well. We were true to the spirit of the story, if not the details. And it was the most amusing fifteen minutes of the day, so there's that.

Labels: all about me, Charlie, Cubby, family, Jack, randomness


Jack took his first steps yesterday. It was such a classic Third Child Milestone, too. Lemme tell you about it.

I was reading in the bay window chair in the living room. The MiL and all three kids were in there too. Charlie was playing on the chair by the fireplace and Jack was standing up there watching him. Then I guess Jack just turned around and struck out across the living room. First thing I knew about it was the MiL announcing excitedly, "Jack's walking! He's walking!" I looked up from my book in time to see him take five or six steps before plopping down on the rug.

We all cheered. He looked a little stunned, then smiled uncertainly. Good thing the MiL was there, or else Mindy Kaling* would have made me miss my third baby's first steps.

Later he walked back and forth a few steps between me and A., before Charlie decided that was quite enough attention for the baby and launched himself at A. to end the walking practice.

Charlie is such a middle child, it's kind of ridiculous.

It was cold enough to partially freeze our water pump in the cellar, requiring A. to break out his heat gun and the kerosene heater to get everything flowing again. Also cold enough to create the infamous frost on our bedroom walls. Cozy.

Oh, and Happy Valentine's Day. Always an afterthought around here.

Okay, I think I've covered everything. Let me leave you with a thrilling photo of the newly-bipedal Jack: 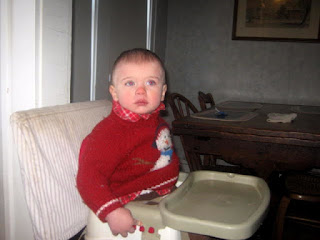 Courtesy of Cubby the Photographer, specializing in pensive photos of red-eyed babies.

* I was reading Is Everyone Hanging Out Without Me? (And Other Concerns). Obviously a very absorbing book. (It is very entertaining, though, in all seriousness.)