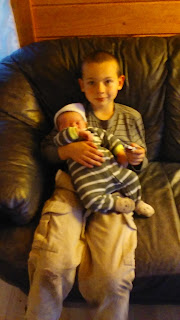 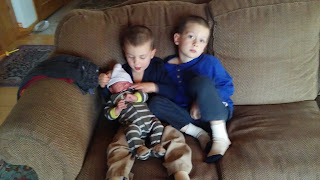 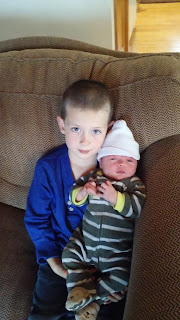 
At the very first house we stopped at on Halloween for trick or treating, Charlie came running back down the path to me exclaiming with great excitement, "At last! All my classmates always have this in their lunches, and now I get to have one!"

His great prize? A snack-size bag of Doritos. It was the first thing he chose to eat when we got home.

May your dreams always come true so easily, Charlie.

Halloween Fun All Around


Last night at 8:45, I was carving the pumpkin that Charlie had brought home from a school field trip to a pumpkin patch a couple of weeks ago. Because I forgot to do it before the kids went to sleep.

This morning at 4:45, I was in the boys' room explaining to Jack that it was not time to get up, and he'd better get out of Cubby's bed and into his own and go back to sleep if he wanted to go trick or treating. Because I could not face the holiday merry-making with three exhausted boys. Then I sat in there until they were all mostly back asleep.

This morning at 5:30, I was nursing the baby, who courteously waited to demand milk until her brothers were mostly back asleep.

This morning at 5:45, I was cutting up tortilla pinwheels for both Cubby's and Charlie's class Halloween parties, because it turned out that Cubby was on the docket to bring in a treat, too, which I did not learn about until Saturday. And I didn't have enough cookies in the freezer. And his teacher requested non-sweets. Tortillas with cream cheese and ham it is (or bacon, in Charlie's case, because he doesn't like ham).

This morning at 6:20, I was making an omelet with cheese to line the small boys' stomachs with some actual food before the sugar bomb that is Halloween exploded.

This morning at 6:25, I was sorting out and bagging up all the pieces of Cubby's and Charlie's costumes to stick in their backpacks for the school Halloween parade.

This morning at 6:30, I was carving the other side of the pumpkin because there wasn't enough air flow to keep the candle inside burning. And then Charlie told me I should have made it look scarier. Right. Noted.

This afternoon at 12:30, A., me, Jack, and Poppy in her carrier will all go to the school, first to Cubby's classroom, then to Charlie's classroom, then outside to watch the costume parade, then inside to the auditorium for parade continuation.

This evening at 5:30, A., me, Cubby, Charlie, Jack, and Poppy will be going to the village for the Big Event of trick or treating. It's supposed to be 45 degrees with a lot of wind. 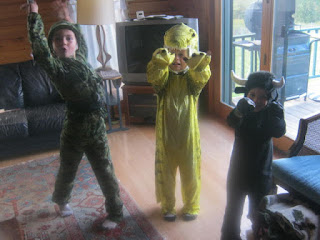 And that's Halloween. Have a happy one.