The Miracle of Machinery


This morning after traversing the snow tunnel along the length of the driveway to get Cubby and Charlie out to the road for the school bus (HOORAY FOR SCHOOL!), I took a good look at the buried Subaru near the house. And the vast field of snow in front of it that A. would have to dig out if he wanted to use his car anytime in the next month or so.

When I got back in the house, I suggested to A. that perhaps we should call the plow guy our landlady used.

Now, you should know that it has been something of a point of pride for A. to never in his life call a plow guy. Even at Blackrock, which had a very long, steep driveway that got snowed in somewhat regularly, he always shoveled it by hand.

But this amount of snow? This is a bit much. Even for Supershoveler. A. agreed this would be the time to call in the heavy machinery.

So I called the plow guy and left a message asking if he could plow our driveway sometime in the next couple of days. I figured he would be really busy, and maybe he'd get back to me sometime today to set up a time to come tomorrow.

A. and I took Jack for a walk right after that (HOORAY FOR SUNSHINE AND NO WIND!), and as we were coming back, we saw a John Deere tractor drive by that we didn't recognize. We thought maybe the farmer on the corner had finally gotten rid of his 1960s-era tractor and upgraded. But when we got home, we saw that a small part of the driveway in front of where the van was parked, as well as a space next to the mailbox, had been plowed.

Still, we thought maybe it was the town road crew, which had been busy with heavy machinery this morning widening roads and pushing around snow ridges.

But about fifteen minutes later A. came running into the house for the van keys, because the John Deere tractor was in our driveway, plowing.

I have to assume it was the guy I called, although he never called back to say he was coming and never got out of his tractor to talk to us or even to get paid. All he did was plow.

And did he ever plow. His tractor had huge back tires fitted with snow chains and a front loader that shoved all that snow around like it was nothing. This dude's not messing around with any rusted pick-up truck fitted with a puny plow on front. 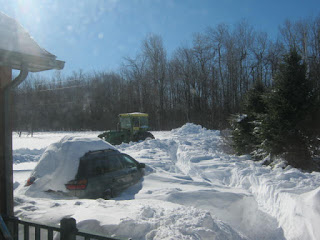 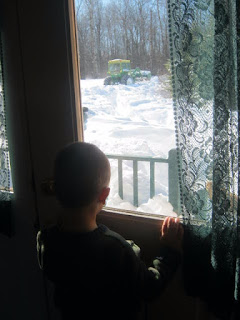 Twenty minutes later, he had cleared the entire driveway and an area in front of the house big enough to turn a Mack truck. 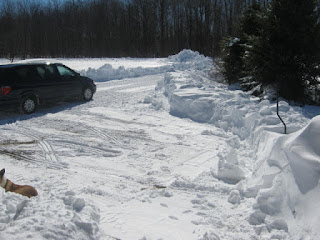 I'm assuming, since he drove off immediately after finishing, that he's going to send us a bill. I don't actually know what he's going to charge us, but whatever it is, it's totally worth it.

A. and his back agree.

Labels: randomness, the A team, the great white north, weather


If all three boys disappear downstairs with cardboard swords for a great battle while I'm making my breakfast, the question is: Will I have time to finish cooking it and actually eat it in peace before someone comes screaming upstairs because he got poked in the eye?

This morning I got lucky. There were no casualties before I finished my eggs, which meant I got to eat sitting down at the table with no one hanging on my chair whining for my food, demanding arbitration for an acrimonious dispute involving the mini-Transformer, or requesting food for himself.

On this, the third straight snow day off from school, I'll take all the unexpected moments of peace I can get.
Posted by Kristin @ Going Country at 6:07 AM 2 comments:

Labels: all about me, brothers, randomness

The Superpost for the Supersnowstorm

Cubby and Charlie were dismissed from school at 11:30 yesterday morning and arrived home on the bus around noon in a pretty good snowstorm. A few hours later, about the time they would normally be arriving home from school, there was an honest-to-God blizzard out there.

At 8 p.m., I opened the door to let Mia out before bed and was confronted with this. 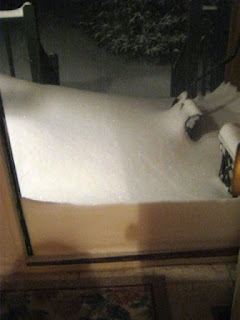 Why the people that built this house didn't enclose the porch is a mystery for the ages.

Mia took one look and turned right around. I couldn't really blame her. There was at least a foot of snow on the ground already. So I put on my outdoor gear and shoveled a path for her to get to the grass, and a little open area to serve as a latrine. She did actually go out after that, but just stood there on the porch blinking in the blowing snow and waiting for me to let her back in. So I did. 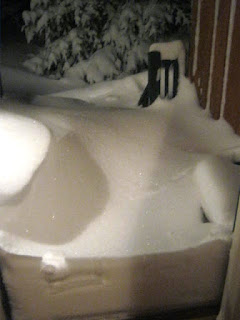 Once again, I grabbed the trusty snow shovel and went out to shovel out the path and the latrine for the dog, this time fighting my way through three feet of snow. Once again, Mia stepped out, walked to the end of the cleared area, took a look at the walls of snow surrounding her on all sides, and came right back in the house.

She did eventually use the facilities, I suppose. 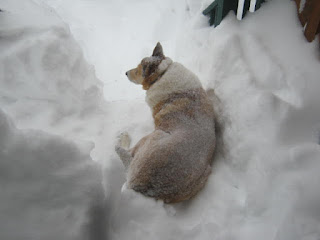 She also started blending into the environment after about four minutes outside.

When Jack woke up around 6:30 a.m., I went to turn the thermostat up and realized the furnace wasn't running. I realized this because the thermostat was set at 61 degrees, but it was 59 degrees in the house. After checking to make sure none of the monkey-children had flipped the power switch on the furnace, I formed the hypothesis that the furnace vent, which is only about a foot off the ground, was covered over with snow and the furnace was turning itself off as a safety precaution.

I suppose I could have brought Jack out with me to shovel the vent out, but instead I got A. out of nice warm bed so he could go out in the storm to shovel it out.

He did. And when I was in the shower, he got all three kids dressed to go out with him to do some more shoveling.

I took lots of pictures, at A.'s request. 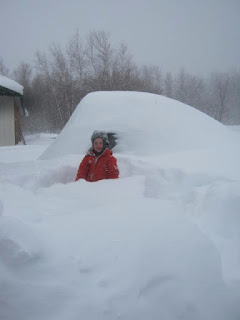 Here Charlie is standing on a path A. had shoveled, and that big hump of snow behind him is the Subaru. 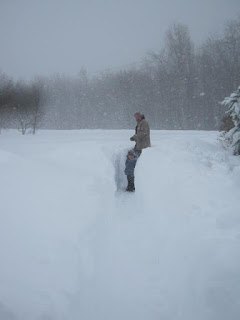 Jack stuck close to Daddy as he extended the snow tunnel to the plowed road. 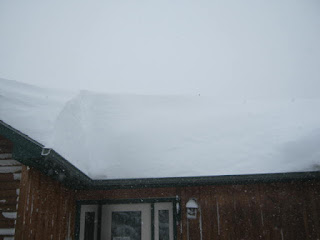 When I walked out the door after my shower to take pictures, the slamming of the front door resulted in a snow dump on my head from the accumulation on the roof. 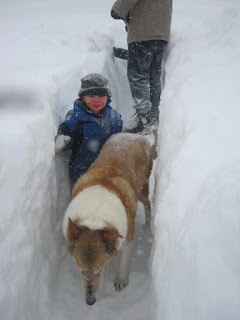 Mia gets in everyone's way in constricted areas. 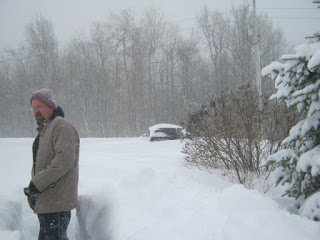 There's my sad and marooned minivan way up there by the road. 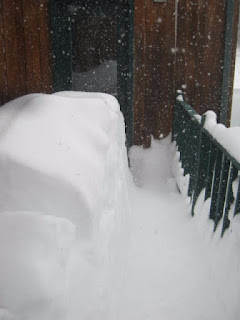 A. had to clear a path to his garage office. Another mystery: Why the hell, in this climate, wouldn't you have the garage open into the house? 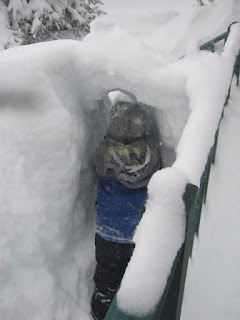 Cubby tunneled away like a gopher, frequently getting buried in snow (it was very light, so no worries), but persevering nonetheless. 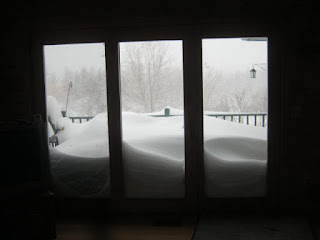 This is the view from our living room onto the porch. Cozy. 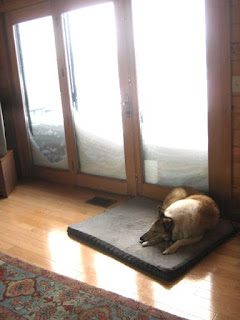 Mia more or less hasn't moved from this spot for two days. Can't say I blame her.

It's still snowing. It's supposed to snow all day today, and a little tomorrow morning. I suspect our total will end up being somewhere in the vicinity of four feet.

And that's the snow update. Over and out.


When the snow begins to fall at the start of a massive snowstorm, I do believe it's mandatory to make some cookies*. 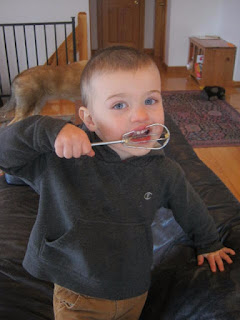 
Our weather forecast for tomorrow and Wednesday has been predicting some snow for a week or so now. Every day the amount has changed, ranging from less than an inch to 6-12 inches Tuesday, with more snow of varying amounts on Wednesday. There has been a Winter Storm Watch for the past few days.

This morning when I checked, the Winter Storm Watch had been upgraded to a Winter Storm Warning and our forecast is now calling for 12+ (but how much plus?) tomorrow, with 5-8 inches on Wednesday. Plus wind with gusts up to 35 miles per hour.

I think it's safe to say Cubby and Charlie won't have any school on Wednesday. And A. is in for a LOT of shoveling.