Long version: I had a staff meeting at school in the afternoon and needed something quick to cook. Breakfast sausage patties fit the bill.

Long version: I had just a few uncooked pork country ribs, and then leftover hamburgers and brisket, so those were divided up among the family. Nothing like a smorgasbord of meat to ensure that everyone wants what his brother has.

Long version: My parents sent us a variety box of steaks from The Kansas City Steak Company for our anniversary. Since Sunday was our actual anniversary, I made some of the steaks for our celebratory meal. I chose the porterhouse and filet mignon. Two of each, and almost all the meat got eaten. They were really good.

Each box of steaks came with a packet of "Steak Seasoning." The actual spices weren't listed on the packets, but it seemed to be just coarsely ground pepper, salt, and maybe onion powder. In any case, one packet was way more than I needed for the four steaks I cooked, and since there were five boxes (one for each kind of steak), that means I'm going to have a LOT of Steak Seasoning. Luckily, it is also good for roasted potatoes.

The green beans came from our garden. The kids ate theirs raw, as is their habit, but the rest I roasted with olive oil and garlic and man, I just love roasted green beans.

Break for a photo of the food: 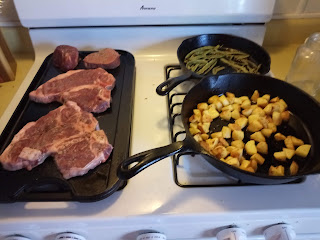 And just a few of my rather large cast-iron pan collection.

Miss Amelia called on Saturday to ask if we would take some extra food she was given that she couldn't eat herself and when we went to get it, she gave me two boxes of food. Mostly canned things and dry split peas and rice, but also a bag with different cookies for the children.

Some of the cookies were clearly Christmas cookies, in the shape of bells and gingerbread men and so on. I don't know how one has Christmas cookies in July--maybe they were in her freezer?--but the children didn't care. I tasted one, and they tasted fine, so sure. Christmas in July.

Long version: The Sysco chub is back!

Wow. That sounded gross. The meat's kind of gross, too, to be honest, but it was fine for taco meat.

I had the best of intentions to make my own tortillas for the first time in awhile, but those good intentions never became reality. As is so often the sad case with good intentions. It's just been too hot lately for tortilla-making to be appealing.

Whatever. The kids ate their store-bought tortillas with nary a word.

Long version: More of the chicken leg quarters that I separated into thighs and drumsticks.

Have I mentioned how much I loathe separating chicken leg quarters? Breaking the joint, slicing through the flabby skin, keeping a good grasp on the slippery, clammy meat, trying to not get raw chicken juices everywhere . . .

I put the chicken to marinate in the morning in olive oil, vinegar, garlic powder, salt, and dried basil. Also in the morning, I made a batch of Finny's sauce. I made it with canned tomatoes and balsamic vinegar in place of the red wine and even with those dubious substitutions, it is still the best tomato sauce ever. My plan was to make something like a non-breaded chicken Parmesan.

But then when dinnertime came I ended up just browning the chicken on the stove and finishing it in a 400-degree oven. And instead of the rest of the fresh homemade pasta from the freezer I was going to cook, I just served leftover rice.

Some nights are like that. But at least I managed to make the ranch dressing, right? Right.

Long version: It was nice to have the sauce already made for the pasta. It made for a very easy meal.

Although the pasta didn't seem to suffer in texture from freezing, it did taste a bit like freezer. Probably because I had it in my small freezer above the refrigerator. It probably would have been better off in the chest freezer. Anyway, once the sauce was on, it wasn't too noticeable. The children certainly didn't notice it.

I made the muffins because when A. went to the post office the previous day he returned with bananas and rice. Not in the mail, but from the lady who runs our post office. People just give us food ALL THE TIME. Must be because of all these kids we have.

The bananas were, curiously, still green on the outside, but pretty mushy on the inside. Cubby really wanted to make banana bread with them, but I made banana muffins instead, so I wouldn't have to have the oven on for an hour to bake the bread.

I used this recipe, but with all-purpose flour instead of whole wheat, and none of the sprinkled stuff on top, and they were good. Definitely not as shockingly sweet as most banana bread/muffin recipes.


Let's just say that these photos and the accompanying explanations are small slices of the bizarre pie that is our life. Because there's really no other connecting theme.

We'll start with yesterday and work back in time.

In the summer, it is often the case that I spend all day trying to get my children to stay outside, and then they go out about an hour before bedtime. That means that then I have a very hard time getting them back IN.

On the plus side, though, we do all get to see skies like this as I'm marching them inside by the ear. (Literally.) 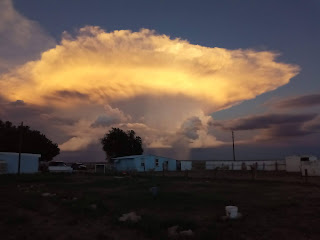 The view to the east looked alarmingly like a mushroom cloud. 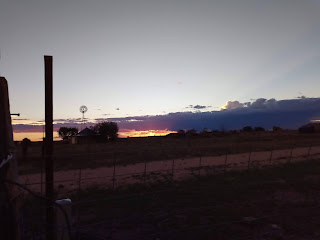 And the view to the west looked much more impressive in person. (Both photos--plus about two dozen identical ones--taken by Cubby.)

There is a bull snake that hangs around our property. Cubby has named him Howard. Howard is liable to turn up anywhere, but the other day, the dogs' frantic barking alerted us to the fact that Howard had turned up under the bunk bed in the covered porch*.

We put the dogs in the shop to get them out of the way, then A. nudged Howard out from under the bed and out the door. The children were thrilled to be able to examine Howard up close. 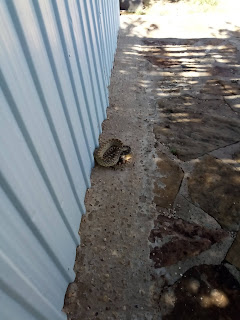 Relatively speaking, that is.

Given that Howard is most likely the same snake that struck at me in the chicken coop, I don't feel quite so friendly towards him as the children do. However, bull snakes do eat rats and gophers, so I grudgingly tolerate his presence.

Remember that goldfish pond Cubby was excavating in the back pasture? Well, he hasn't gotten it big enough for goldfish yet, but it was certainly big enough to make a satisfying children's pond when it filled up after several big rains. 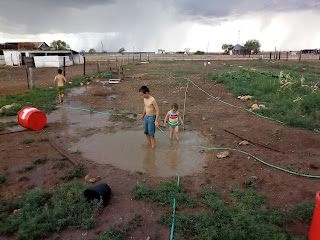 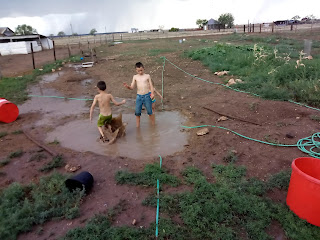 Muddy play is the best play.

Okay, I think that's a big enough pie for now. Over and out.

* Yes, there is a bunk bed in our porch, left there by the previous owner. I think his nephews used to sleep out there when they were visiting. We use the top bunk to store junk we don't want the kids to get. The bottom bunk is now a dog bed, and the space under the bed is also a dog den.


According to our marriage certificate, today is the 17th anniversary of the day that A. and I got married in a little white country church near Blackrock.

That number seems impossible, but I have the paperwork to prove it.

And now for a photo from that momentous day:

Yes, this is a photo of a photo. Because that's the kind of high-quality, professional content you can expect to see here.

Two crazy kids who became two crazy adults with four even crazier kids of their own. It's been a very interesting seventeen years. Who knows what may happen in the next seventeen?

Labels: all about me, the A team
Newer Posts Older Posts Home
Subscribe to: Posts (Atom)