Yesterday we went to a . . . town, let's call it (smaller than a city, bigger than a village) so Poppy could get her 18-month vaccinations.

We also went to the lake beach there and had a very summer-vacation kind of day for the kids. I forgot my phone, though, so I didn't get any photos and anyway, that's not the point of this post.

We stopped at the gas station on our way out of town and A. decided to go in to get some liquor. We were out, and this is the closest place to get any. When he got back to the car, he had a box of wine for him and a bottle of Tanqueray for me.

The Tanqueray was very unexpected. We do not generally buy top-shelf liquor. I mean, we don't buy total swill, either, just usually something more mid-range than Tanqueray.

When I expressed my surprise at the Very Fancy Gin Purchase, he said, "Well, they only had two kinds of gin: Tanqueray and Crystal Palace, which you've probably never heard of unless you live under a bridge."

Right. Thanks for the Tanqueray, A.

(Though I must admit to a bit of curiosity as to what Crystal Palace gin tastes like. I'm imagining rubbing alcohol.)

Labels: confessions, the A team

Friday Food: A Week of Eggs and Pasta


We don't usually have pasta regularly, but we sure did this week. The children approved.

Long version: We were on our way to the post office this morning when a neighbor (neighbor in the loose sense--they live about four miles away) I've met only once stopped me and asked if I could use some eggs. She has 16 laying hens and it's just her and her husband at their house. She said she had seven dozen eggs in her refrigerator and really needed to get some out of there. I told her I would be happy to take some.

She brought me four dozen. A. was at that very moment in the larger town with a shopping list that included three dozen eggs. So then I ended up with seven dozen eggs in my refrigerator. We're more able to handle that than an elderly couple living alone, though. I started by making scrambled eggs.

The eggs I got from our neighbor are quite obviously from free-range hens. The difference in color compared to store eggs is quite startling. 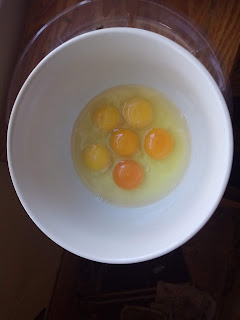 Three neighbor eggs; three store eggs. I bet you can tell which is which.

This is actually the second harvest of garlic scapes from A.'s extra-large garlic planting. My favorite way to cook them is to chop them into short lengths and saute them in olive oil with nothing else but salt. I usually cover them, too, to get them pretty soft, and then I let them brown just a bit. The result tastes kind of like those very garlicky green beans you sometimes get at Chinese buffets, but better.

The pasta just had butter, salt, pepper, Parmesan cheese, and a little garlic powder. The pasta with the scapes and the eggs was a surprisingly excellent combination.

Long version: I used cube steak for this, which I cut into chunks and marinated in soy sauce, vinegar, oil, garlic powder, ginger, and a little sugar. Then I made the stir-fry with various vegetables and a sauce made of the same ingredients as the marinade, plus peanut butter.

Long version: The MiL gave Cubby a cookbook, which he is enthused about using. Unfortunately, many of the recipes call for ingredients we don't usually have on hand, and of course, it's not so easy for us to get ingredients. However, I did ask A. to get some cornflakes for the recipe for oven-fried chicken. Despite the fact that buying cornflakes to coat chicken is not something I would normally endorse.

It's not my cookbook, though, and Cubby thought that it looked like a good recipe. It was a bit involved, with a buttermilk marinade--we used yogurt instead--and coating with the crushed cornflakes. Crushing the cornflakes was Cubby's favorite part. 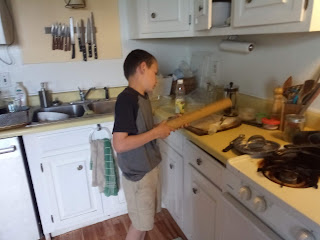 The enormous rolling pin my dad made me was maybe overkill, but Cubby sure enjoyed it.

It was tasty chicken, and everyone liked it.

Cubby also made mashed potatoes and a green salad with shaved carrot ribbons and a mustard vinaigrette. He did not use his cookbook for those, however. It didn't have a recipe for mashed potatoes, but I managed to instruct him in how to make them anyway.

I made the custard, mostly to use more eggs. Six more eggs down.

Long version: The recipe for Cubby's chicken called for a ton of marinade. It used up an entire quart jar of yogurt, and there was a lot left of the marinade after we did the chicken. It seemed a terrible waste to throw it away, so I left it in the refrigerator and used it to marinate a package of lamb the next day. Then I just baked the lamb in the oven while the vegetables were roasting and finished it under the broiler to get browned. It was very tasty.

The pesto was a garlic scape pesto. It also had some of the beet green thinnings and some lamb's quarters along with the olive oil, walnuts, and Parmesan cheese. The children were very excited to have pesto again, even though without basil I don't think it's much of a pesto. It was very good, though.

Also this day I received a shipment of the maple syrup I order by the gallon from Vermont, and this is what the jug looked like when it arrived: 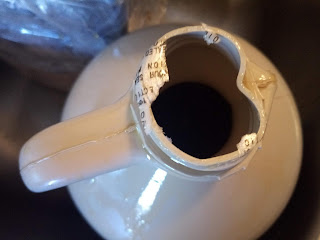 The postal service must have dropped it from a speeding truck and run it over to make this happen.

The entire gallon leaked out and all over the box the jug was in, as well as in the additional packaging the USPS enclosed the original box in to get it to me along with their apology for the state it arrived in. It was a horrific mess.

The maple syrup company is sending me another gallon. They asked me to send a photo of the damaged jug so they could submit a claim to the USPS, and they remarked that they have never seen such extensive damage to one of their jugs in shipping. Lucky me.

I was going to make another salad, but the night before as Charlie was finishing his salad, he remarked quite calmly, "I don't really prefer salad with my dinner."

Since he stated this preference without complaining in the slightest, I rewarded him by not serving salad again. Funny how my ears work so much better when the voice I'm hearing isn't whining. 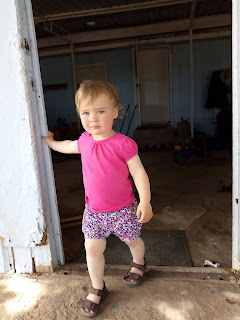 Cubby picked this outfit for Poppy. Adorable as the floral shorts are, they are totally impractical for our rocky, sticker-y terrain. Poor girl's knees took a hit, for sure.

Long version: I made the bacon and eggs and then let everyone choose how they wanted to eat it. Charlie and Jack went with corn tortillas for breakfast tacos--Jack with cheese, Charlie without--and A. and Cubby chose Sunday sandwiches. Sunday sandwiches were a tradition of A.'s childhood. If he went to church, the MIL would make him a sandwich of bacon, egg, and cheese. A. said that since we go to church every Sunday, we're allowed to have Sunday sandwiches during the week.

Poppy had a tortilla and cheese and some eggs. She didn't get to choose. I chose the least-messy option for her. Sucks being one sometimes.

So I started this week with seven dozen eggs, and I currently have two and a half dozen left. We went through a lot of eggs this week.


This morning while we were outside, Poppy climbed to the top of the fence and before I could reach her to pull her down, fell backwards. It was a fairly bad fall, about four feet, and would have been much worse had she landed on the log that was just behind her or the hoe that was a couple of feet away.

All of the boys were in the vicinity when it happened--though none, unfortunately, thought to get her down before she fell, apparently. They immediately started running around shrieking that Poppy needed a hospital and then dashed into the house to set one up.

By the time I got inside a few minutes later with a completely calm and uninjured Poppy, her hospital bed was waiting for her and she graciously submitted to the tender ministrations of her brothers.

First they tucked her in securely. 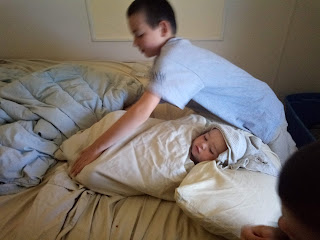 It wouldn't do for the patient to catch a chill.

They all clustered around to minister to her. 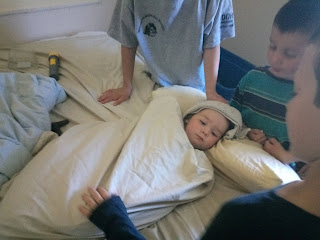 She made herself appropriately pathetic for this.

They brought her her water bottle and fed her peanuts. 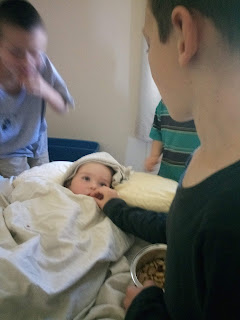 They decided she needed to be transported to a different hospital and put her on the stretcher to go to the couch. 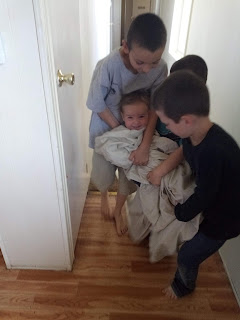 Amazingly, she thought this was fun.

Shortly after her transfer to the couch hospital she made a full recovery and resumed her typical role as target in all their chasing games. But it was a nice, caring interlude while it lasted.