The house is mostly packed up. I even brought most of the stuff out to the barn already, so we can just back the moving truck up to the barn and wheel it all up the ramp. Theoretically. I know there will be a few boxes of randomness that I'm gonna just throw in at the last minute, but hey! I mostly did it, while working around insane end-of-year school craziness and four little kids and all their incessant needs.

So here's what's going to happen*.

Today I got all the suitcases packed with the clothes we will need for a month at Blackrock.

Tomorrow morning we're going to get the cars all packed up and ready to go before church. After church is over at noon, we'll come back to the house to pick up the geriatric collie and then hit the road for Blackrock in both our cars.

We'll be at Blackrock until Thursday, during which time I will be packing up yet more things that never made it up to this house.

Early Thursday morning, me, A., and Poppy will leave the boy children with their Grandma and pick up the moving truck to bring it up north, load it, clean the house, and go back to Blackrock on Friday. (That all sounds so simple in that one sentence. It will not be simple.)

At Blackrock, we'll unload the things that belong there (mostly rugs), load up the things I packed from there, and A. will--we hope--leave somewhat early on Saturday to start the drive to New Mexico. Possibly with Cubby along for company.

He'll make a pit stop at my aunt and uncle's house in Wisconsin to pick up some furniture that my grandfather made decades ago and that no one else in the family is using at the moment, and then continue driving until he arrives at our new house.

He and Cubby will unload the truck, then turn around and drive back to New York in the truck, arriving within ten days of picking it up. (This ended up being cheaper than a one-way truck rental and airfare.)

And then, sometime at the end of July, the whole family will drive out to New Mexico together for good.

This is not the most uncomplicated move, but we wouldn't want to make it easy on ourselves or anything.

Okay. You ready for this? Me neither. But the only way out is through, so here we go!

* As if this matters for any of you. But it makes me feel better to write it out.

Labels: all about me, confessions, family, moving, randomness, travelin'

Friday Food: Prepare for a Shocker


Amusingly enough, the shocker is not that the kids ate another beaver tail. That's unremarkable at this point.

Short version: We went out to eat.

Long version: Charlie graduated from kindergarten Friday morning (but still had to go to school this week, which he was displeased about), so we went to the diner to celebrate. Of course, the guest of honor didn't think anything on the large menu sounded good except grilled cheese. I had made him grilled cheese for lunch, but I figured, whatever, it's his party.

Then he discovered the restaurant grilled cheese had "the gross cheese" that he hates--Kraft singles--so he didn't want that, either. He traded his sandwich for a few of Cubby's french fries and two shrimp, then came home and ate apples and cheese and yogurt.

I didn't even order anything, instead having a few bites of A.'s fries and then coming home to eat cold leftover sweet potatoes and chili meat.

So basically, we fail at eating out. 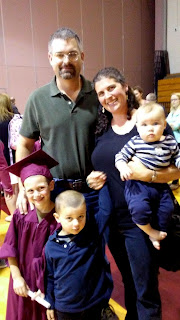 Cubby had a field trip this day, which is why it's just the five of us. "Just." Ha.

Long version: A. and Cubby went fishing in the afternoon, returning with five fish (I think four trout and one perch). 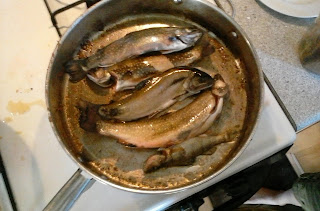 And here they are. They stuck terribly to this stainless steel skillet, leading A. to proclaim, "Let this be a lesson to you, children: ALWAYS COOK IN CAST IRON." Amen.

Jack insisted on helping A. cook the fish, despite the very real danger of spitting bacon grease. 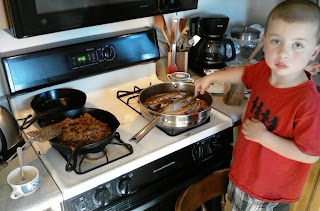 Three-year-olds can do everything by themselves, as they will tell you at any opportunity.

Cubby caught three of the fish, and stated somewhat petulantly during all this picture-taking, "Of course you won't take a picture of the person who caught the fish."

So I did, and this is the result. 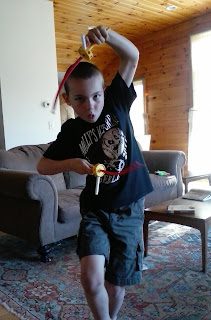 Cubby ate so much fish he didn't want any tacos, but everyone else ate them. I made them by the simple method of browning ground beef and dumping in leftover chili (which was mostly sauce at that point.) Boom: Instant taco meat.

Long version: Is it a rule that you have to have steak on Father's Day? Probably not, but it's pretty much A.'s favorite meat, and I found some rib eyes and T-bones (multiple, yes--A. can eat A LOT of steak) on deep discount last week, which I froze in anticipation of this very day. I grilled them. Happy Carnivore Daddy.

Long version: I had half a can of tomatoes left from making the chili, plus a couple of cups of frozen leftover pasta sauce, so I combined them with some leftover ground beef for a meat sauce.

I made the pasta almost all the way at 7:45 in the morning, because our forecast was for well over 80 with high humidity, the A/C is still not working, and I had to spend a few hours at the school in the middle of the day hauling Jack and Poppy around to a couple of end-of-year events. I knew I would be tired, hot, and not happy about cooking by dinnertime. So I made the sauce and pasta early and stuck it in the refrigerator. At dinnertime I reheated it with some added milk and beef stock from the freezer, stirred in some green peas and added grated Parmesan at the end.

None of the boys were interested in the cucumber until I cut it into four pieces the entire length and handed them each an 8-inch-long cucumber spear. Then they were all about it. I suspect Freud would have a lot to say about that.

Then A. came home from his trip earlier than expected, so I made him some hamburgers from more of the ground beef. And then it stormed and finally cooled down a little, alleluia.

Long version: The beaver tail has been in the freezer over a year. Not even wrapped up, just a scaly, naked beaver tail hanging out on the top shelf of the upright freezer. Well, we wouldn't want to waste it, now would we? So A. cooked it on the grill and handed it over to the feral boy children, who devoured it in short order.

When I opened the pork tenderloin to cook it, it smelled bad to me. I checked the "good until" date, which was still several days in the future. I remembered reading somewhere that vacuum packed meat can off-gas when it's opened, so I thought maybe that's what it was. But after it was grilled, it still smelled bad. I tasted a bit. It tasted bad. I made A. taste a bit. (Nice of me, I know.) He said it tasted bad.

Onto plan B: Bacon and eggs. I had already made garlic scape butter to put on the now-trashed pork, so I used some of that to cook the eggs, because flexibility is the hallmark of a good cook.

Actually, not cooking rotten meat is probably the hallmark of a good cook, but whatever.

Long version: I sauteed the rice with the rest of the green garlic butter from the night before, then cooked it in the last of the beef broth I found in the freezer, and then added chive flowers when the rice was done.

I actually like the flowers better than the chives themselves, for the simple reason that you don't need a knife to prep the flowers. You just twist the base of the flower off and the individual little florets or whatever are the right size to use. Neat.

Long version: I had just a bit of mustard left in a bottle, so I shook it up with some vinegar and oil and covered the pork chops with that to marinate. They were kind of dry and bland when I tasted the thinnest one after it was done, though, so I spread some mayonnaise and salt on them while the rest were finishing up on the grill. Still bland.

We had to put barbecue sauce on them at the table.

Okay, your turn! What'd you eat this week?
Posted by Kristin @ Going Country at 3:07 AM 5 comments:

The Snotty, Itchy Icing on the Stress Cake


What this week of finishing up school and packing up a house for a cross-country move needed was a few kids with a cold. Plus a kid with poison ivy all over his legs. You know, for maximum sleep deprivation and general misery.

Oh well. Could be worse. They could all be throwing up. (Knocking on alllll the wood now. Good thing we live in the middle of the woods.)


Okay. We're at T minus 6 days before we leave this house. I am . . . not all packed. I don't even have the boxes I need to get packed at the moment.

But! In the course of random Internet surfing this morning--which is of course what I should be doing instead of the five million things that will actually assist me in moving in an organized fashion--I came across a helpful quote*. Allow me to share in the hopes that it might help someone else out there.

Life is like a roller coaster: Sometimes all you can do is hang on and try not to puke.

Sometimes the universe sends us just what we need, doesn't it?

* I'm not sure if quote is the appropriate term, as I highly doubt this can be attributed to an actual person.