You all know my baby dog, Mia. 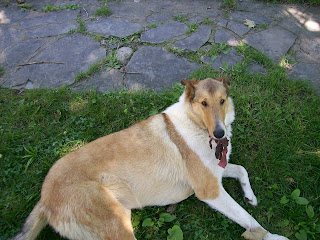 She invites you to play with her manky old gardening glove.
I have a lot of pictures of her. 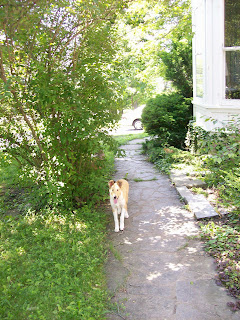 She looks awfully . . . small in this one.
Oh, right! That's because that's not Mia. That's Rita, the homeless puppy. Rita is the only puppy who has not yet been sold. So she's still here, hanging with the big dogs and waiting for her owner to come along. Her markings are almost identical to Mia's. Except for the scars all over Mia's face, Rita is basically a miniature version of her. They like to play together, which is very cute.
How about a size comparison? 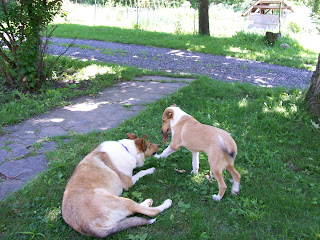 My dog is a behemoth. But she shares her glove nicely.

Sometimes, when I'm feeling particularly witty, I call Rita the Mini-Mi. Geddit? Like Mini-Me from Austin Powers and Mini-Mia?
I know. My cleverness is really astounding.
Posted by Kristin @ Going Country at 4:55 AM 6 comments:

And what do we talk about on Fridays? YES! Alcoholic things! Wheee!
BUT FIRST.
As to yesterday's guessing game* . . . Yes, I am indeed beginning the Mulberry Juicing Insanity. (For an explanation of bat cheese, see this post and read the comments.) So far, I've collected seven quarts of berries, which have yielded two quarts of juice. When I have six or seven quarts of juice, I'll can it. At the rate they're coming, that should only be a few days. By which point the counters, the sink, and my fingers will all be stained dark purple, and the MiL will probably wish I had gone to Nevada with A. I don't think she likes it when the sink gets all nasty and purple. But she does like mulberry juice, and so she will fret in silence.
But fussing around with mulberries isn't enough for me. No, I decided I needed to do something else in the food-prep category. Luckily, before A. left, he pointed out some elderberry trees in flower that grow in the hollow near the mulberry. He told me the fruit is good for making jelly. I never even knew they were there, but I HAVE heard of elderberry wine before (where did I hear about it? no idea--information flows in and out of my brain unchecked and mostly unused, unless it has to do with food), and so I catalogued that for future reference. Then yesterday, I decided to look up recipes for elderberry wine.
Elderberry wine looks like a pain in the ass to make. Yeast nutrient? Say what? I'm not going to special-order stuff for a wine that looks to be sickeningly sweet and syrupy. However, I did note in my search something called elderflower champagne. I like champagne! There are flowers on the elderberry trees right now! Let's investigate further! So I did.
Elderflower champagne is not, of course, real champagne, as that particular fizzy beverage is only made in France, in Champagne. Imagine that. Nor is elderflower champagne particularly alcoholic. (Or so they say. Not having tried it, I have to take it on faith that one glass of it won't get you totally bombed. These things are a bit subjective, you know.) But it IS easy to make and is supposedly light and refreshing. That is, not heavy and syrupy. Plus, I had all the ingredients at hand. All it requires are elderflowers--which apparently have some kind of natural yeast on them that produces the fizziness--sugar, water, lemon, and white wine vinegar.
(There was one note to make sure to smell the flowers before you use them, because they can sometimes smell like cat piss and "whatever odor your flowers have will be imparted to your beverage." Cat piss champagne! I sense a niche product for crazy cat lovers!)
So I grabbed some flowers that did not smell like feline urine, mixed all the ingredients together in a big ole mason jar, and left it to sit and ferment for awhile. It takes a couple of weeks before it can be tasted, so you'll have to endure the suspense until then. 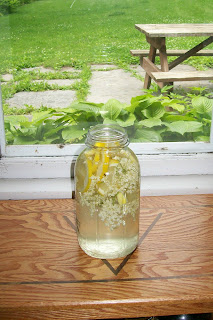 Sure, it LOOKS pretty. But will it taste like cat piss? Stay tuned!
It sure is getting exciting around here, huh?
And speaking of exciting!

In other, non-alcoholic news, we had a baby hurricane blow through here yesterday afternoon that did some damage. There were limbs down in the yard, limbs across the driveway, literally half the Bradford Pear tree in the lambs' pasture blew over, a whole walnut tree in the hollow cracked at the base and fell, and the walnut tree right next to the chicken coop actually ripped up at the roots and fell on the sheep shed in the pasture. 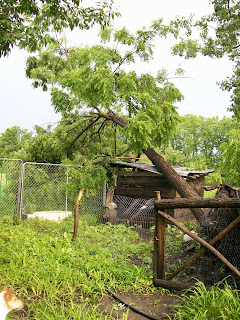 Don't worry. The sheep are okay.

However! By some absolute MIRACLE, nothing fell on the numerous power lines and we didn't lose power once. This shed that A. built is actually supporting the weight of the entire tree, so I think he can be proud of his building skill. Only part of the cinderblock wall in the chicken coop was wrecked, so the coop is still standing. The branches hanging over the opening to the shed form a nice leafy bower for the sheep, who will no doubt enjoy eating the leaves on the branches they can reach. None of the animals were hurt, although the chickens were, understandably, quite upset, and squawked their disapproval in no uncertain terms.

Unfortunately, the sole chainsaw operator won't be home for another week and a half, leaving me to drag away as many of the branches as I can and leave the big boys for his return.

Wait, did I say this was non-alcoholic news? Scratch that. I think I need a drink.

* In which only a few of you participated--I'm disappointed in the rest of you. I hope you can live with that.
Posted by Kristin @ Going Country at 5:46 AM 17 comments:

This is a game of my own invention called, "Guess which food is trying to destroy Kristin now."

Here, I'll give you a few hints:

1) They stain my cuticles black.

2) They can be used to make bat cheese.

3) The end product is the key ingredient in a cocktail of my own invention.

So, what is the mystery food, duckies?
Posted by Kristin @ Going Country at 5:34 AM 9 comments:

Labels: all about me, country livin', fun with food, manual labor

The Sunrise is Overrated

Warning: Due to my lack of sleep, it is entirely possible this post will make no sense at all. Just so you know.

A. was annoyingly chipper and cheery while we were sitting at the kitchen table, him eating breakfast, me slumping in my chair and glaring at him while he made jokes. He asked why I was so grumpy. I said because it's FOUR IN THE MORNING, YOU INSANE PERSON.

It was still dark when we left the house. It didn't get fully light until about 5 a.m. I know, because at that point I was slumped in the passenger seat of the car, glaring out the window at the sun. There was a lot of slumping and glaring this morning.

Labels: all about me, randomness, the A team, travelin'

Look! Sun! And sheep! On the beach! Finally! 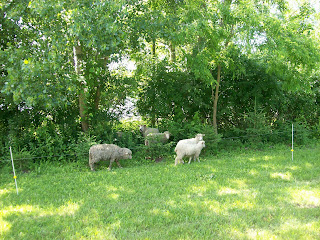 Dutifully eating the brush near the road (and causing traffic delays) . . . 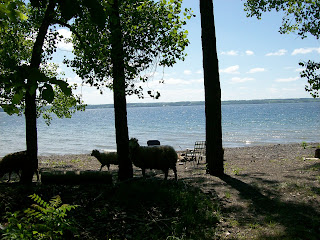 Mysteriously silhouetted against the shining waters . . . 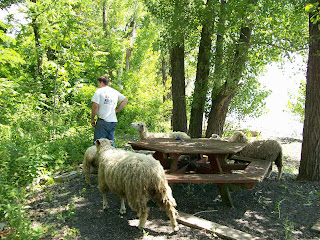 And preparing for a picnic with the shepherd.

These Are My People

A. and I have been working our way through the extended version of The Fellowship of the Ring in the past few (rainy) days. In the beginning of the first movie, there is a description of hobbits that made both A. and I turn to each other and giggle. Well, I giggled. He, being the manly sort, no doubt chuckled or something else appropriately testosterone-y.

1) Are small--Yes. I mean, I'm not really hobbit-sized, of course. But compared to A., who is almost a foot taller than I am and significantly larger in all other respects, I can feel hobbit-sized.

2) Like to grow things--I think no one will argue that this description applies to me. Obviously.

3) Crave peace and quiet--Lord, yes. Not that I always get it. Stupid sheep.

4) Live to eat--Just ask A. what happens when I don't eat every three hours or so. It gets real ugly, real fast.

Also, in the movie it's the hobbits who can carry the ring without succumbing to its evil influence. Unlike the nasty, easily corrupted race of Men. So I think we can add to that list . . .

5) Are pure of spirit--As everybody knows, I'm practically a saint. For real.

ALSO also, we noticed that all the hobbits have curly hair. As do I.

I mentioned these striking similarities to the MiL, who immediately remarked that I don't have hairy feet like hobbits. Fair point. And I can't say I'm sorry about that.

In conclusion, at the first opportunity I will be leaving this World of Men I mistakenly ended up in and journeying to The Shire to live among my people. Where we will grow things and eat and live in peace.

Labels: all about me, confessions, MiL, randomness, the A team

I'm Such a Disappointment

Because I don't have a sheep-on-the-beach picture for you today. Again.

A. didn't put them on the beach because it rained ALL DAY LONG. And not just sprinkling on and off, but a steady, heavy rain from about 11 a.m. on. It was not a good beach-going day. This resulted in a most unusual situation: all three of us were in the house all day. This never happens. And by the end of the day, we were all getting a little stir-crazy.

So. The end result of all of this is that the sheep stayed up in the pasture in their nice dry shed, and we stayed in our nice dry house, and there were no adventures with the sheep on the beach.

On the upside, A. is making french toast at this very moment, and it's not actively raining right now, so I guess there's hope for today.
Posted by Kristin @ Going Country at 6:46 AM 3 comments: