Blackrock by the Numbers

"Woodchuck" is a slang term for redneck used by A.'s friend J., the one who fishes ALL THE DAMN TIME. I think it's much funnier than the word "redneck." At least I did, until I realized that I had become one.

Yesterday I was sitting on the front porch, enjoying the beautiful day and the beautiful view, when Leda the Fluffball came trotting around the corner with a freshly killed woodchuck (a real one, not a redneck) in her mouth. She was very pleased with herself. I was not so pleased, knowing I would eventually have to dispose of the furry corpse that she would inevitably leave on the front lawn. But when she first catches them, she likes to carry them around for awhile, maybe chew on them a little, then she abandons them. She doesn't usually eat them. So I left her to it and waited until she got bored. Except . . .

An hour or so later, after I had gone back inside to do one thing or another, I walked out the door and Leda comes prancing down the path looking like something out of a Stephen King movie. She had blood all down the white fur on her chest, all over her white legs, and smeared all around her mouth. She looked more like Cujo than Lassie. It was quite disgusting. Apparently, she had decided she was hungry enough to snack on the woodchuck.

Now, our dogs eat nasty things all the time, but I try to keep them from doing so when I can, if only to avoid worms. So I locked Leda in the pen and went to wrangle the puppies away from Leda's leftovers. Since I was just about to start dinner (and nothing stimulates the appetite like a half-eaten woodchuck), I left the corpse on the lawn until after dinner, when I could get the pitchfork and dispose of it by flinging it over the fence into the gully.

Fast-forward a couple of hours, I'm down on the front lawn contemplating the mess Leda had left. She had eaten the middle part of the woodchuck, so that the back legs and the head flopped all over the place when I hooked it with the pitchfork. And at just that moment, as I was standing on the front lawn right next to the driveway, with a disemboweled woodchuck on a pitchfork, the MiL's fancy friend drove up in her Land Rover, with her window down. She was all smiley and affable, until she got a look at what I was doing. So I told her, "Just hang on a minute while I fling this."

"Just hang on a minute while I fling this." And that was the moment I knew: I have become a woodchuck.
Posted by Kristin @ Going Country at 5:55 AM 7 comments:

Labels: all about me, country livin', dogs, wildlife 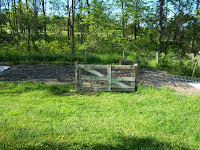 Look at my new garden gate! It has hinges! It swings! I don't have to lift it up and drag it! It is indeed a thing of beauty, but it's not going to be a joy forever. We'll be lucky if it's a joy for a year. Because we have turned into junk farmers. Most people in the flush of youthful idealism vow they'll never become Republicans or corporate drones when they grow up. A. vowed he would never become a junk farmer. But we all change as we get older, and we are indeed junk farmers (though not, interestingly, Republicans or corporate drones).
Junk farmers keep every single thing--every old piece of rusted wire, every half-rotted board, every discarded pot lid--and then when they need to build something, they just use part of their stash. You could say they're the original recyclers. Or you could say they're cheap bastards. We're both.
The only thing we bought to make this gate were the hinges, and then only because all the hinges we had were too small or too rusted to move. The wood came from a board fence that was torn down some years ago, the chicken wire from the pile of old wire fencing in the lane by the rock pile, the nails from one of the numerous rusty cans-full in the shop. So the gate was pretty much free, but it will probably only last a few years before it falls apart entirely. But by then we should have managed to scavenge more boards to build a new one.
We haven't bought wood since we moved here. All our wood came from tearing down the old barn, the old fence, or A.'s friend who's a carpenter and would give us old wood torn out during remodeling projects. From this wood we have constructed a turkey shed, a sheep barn, a pen for the dogs, a table for the shop, and two gates.
Do you know how much all that wood would (ha, "wood would") have cost at Home Depot? Hundreds of dollars. And that is why we junk farm. As long as you don't mind having piles of junk around and building things from half-rotted boards and rusty nails, it's totally the way to go. And as long as your tetanus shots are up to date.
Who would've thought a suburban girl would grow up to be a junk farmer? My mother is so proud.
Posted by Kristin @ Going Country at 6:35 AM 6 comments:

Who Needs a Gym?

I painted our bedroom yesterday. It's not very big, in fact, it's tiny, but it's big enough that it took me five hours. And I haven't even done the trim yet. I had expected my arms to be sore from reaching up and rolling on paint for hours, but what I was not anticipating was the incredible soreness of my legs.

Because our wooden step ladder is in the final stages of disintegration and is nothing more than a death trap, I elected to stand on a chair to reach the ceiling and higher parts of the walls. This worked fine, except for the fact that I had nowhere to set the paint tray, and so had to climb on and off the chair to get paint on my brush and roller. Up and down, up and down, for five hours. I have never used a Stairmaster, but I imagine it's similar to climbing on and off a chair.

If I may offer a bit of advice: Never use a Stairmaster for five hours. If you do, you will wake up in the middle of the night to use the bathroom and find that it is extremely difficult to lower yourself into the right position. If you're a woman, that is.

I nearly fell down the cellar stairs this morning as I creaked along with a full laundry basket. My left leg in particular does not seem to want to support my weight. I'm really hoping I loosen up as the day progresses. At least enough that I can use the, ahem, necessary facilities without significant pain.

Labels: all about me, manual labor

Lowlights of the long weekend:

1) Sorting through gardening stuff in the barn and inhaling pesticides.

2) Using an entire tub of spackle on the bedroom walls, then sanding said spackle and inhaling the dust.

3) Giving my dog a bath for the first time since, oh, last August. Dirty dog.

4) Clogging our bathroom sink drain with an oil-based primer paint. (Note: Oil-based primer does not wash off with water.) (Also note: Kristin is a moron sometimes.)

5) Running out of paint halfway through painting the bedroom ceiling. Beyond irritating.

6) Finding more than one white hair at my temples. I am old, I am old. I shall wear the bottoms of my trousers rolled. (ENGLISH NERD ALERT!)

Highlights of the long weekend:

1) Sleeping downstairs because of the painting, where it's cooler and the drapes shut out all the light. Hate sun.

3) Managing to enlist A.'s help in The Spackle Job from Hell.

4) Seeing the first little potato leaves peeking out of the ground.

5) Finally sinking the garden gate post in concrete and buying hinges so we can have a proper gate attachment, instead of the current ghetto gate tied on with clothesline.

How was your weekend?
Posted by Kristin @ Going Country at 6:01 AM 10 comments:

Labels: all about me, country livin', fun with food, manual labor, randomness

Today is Memorial Day, the day when we should remember all soldiers who have died while serving. As the child of a military officer, I feel it is my patriotic duty to forgo the snark today and instead encourage everyone to reflect on the real reason for this holiday. It doesn't matter what you think of the current mess in Iraq or the military in general--just remember the soldiers, the real men and women in those uniforms, who died.

Most of us no longer visit cemeteries to decorate the graves of soldiers. The least we can do is just pause for a moment, in the midst of family celebrations and barbecues, to remember.
Posted by Kristin @ Going Country at 6:06 AM 1 comment:

I used to be a big fan of Harry and David. You know, the ridiculously overpriced fruity (ha!) company that sells six pears for $30. I am especially fascinated by the overly large gift baskets with about a hundred individual items for $299. I've secretly always wanted one of those. So if you can't think of a good use for your economic stimulus check, feel free to send me some fruit.

(Is it even possible for me to write a post that doesn't include numerous tangents? No, and you should know that at this point in our relationship. If you don't know me by now, you will never, never, never, never know me . . . who's singing along right now? )

(And now, back to our regularly scheduled point.)

I used to like to send Harry and David gifts to people, because everyone likes food. And apparently, I had forty bucks to spend on some apples before moving here, where all my money goes towards spackle. But then I landed at Blackrock and a whole new world of gift options opened up to me when I started canning my own food. Because you have no idea how excited people get by homemade jam, despite the fact that with a few pounds of strawberries and a packet of pectin, a trained monkey could make it. Clearly, there aren't enough monkeys trained in this skill, because homemade jam is just about the most well-received gift I have ever given my family.

So when my brother and his wife gave birth (well, I think we know who actually gave birth there), I decided to send them food. And so much has my life changed that I never even considered Harry and David, but rather descended into the Pit of Despair and put together my own gift basket. What I found down there and packaged up none-too-neatly were jars of raspberry jam, spiced pears, and salsa. I made the jam and salsa, and the MiL made the pears. They are not meant to be eaten together. Just so you know.

My brother doesn't usually read this blog, but if he is . . . Hi, bro! You'll be getting some food shortly if the jars don't all crack in transit!

And P.S. Infants don't dig jalapenos, so don't feed the salsa to the baby, okay?
Posted by Kristin @ Going Country at 6:30 AM 1 comment: