I suppose it's a lingering effect of my suburban upbringing that I still don't feel entirely comfortable in the woods alone. Not that we have particularly dangerous woods around here. No bears, no wolves, not even any moose*.

This does not mean that I can't imagine dangers so remote as to be ludicrous, however.

I have ample opportunity to dream up these unlikely scenarios as I do my very early morning trail runs up to the Plantation, because it's not quite light when I go. Light enough to see where I'm going, but the sun isn't up all the way yet at 5:30 a.m. That time just before dawn is the best time to see animals in the woods. Or the worst, if you don't actually want to see animals.

So far I've only seen small birds and deer, and heard a lot of wild turkeys gobbling in the gully. But I can imagine that there are rabid raccoons just waiting around the curve in the path up ahead. Or, worse thought, a coyote.

This is not as unlikely as it might be, actually, since there are big coyotes in those woods. You may remember A.'s helpful comment that they would only attack children and small women. I don't want to know if I'm considered small enough for a coyote to attack.

I still remember seeing a coyote right in the Plantation several years ago when I used to walk the dogs up there every morning. I almost walked right past it, it was so still. When I caught sight of it, I stopped immediately, and just stared at it. It did the same. Then the four large dogs in the vicinity came bounding up the gully bank and the coyote disappeared. It was a memorable experience, and not one I would wish to repeat without my furry security contingent.

This morning when I went out at 5:30, it was darker than usual because it was raining and the cloud cover had blocked the dawn light. I thought maybe it wouldn't be a bad idea to have a dog with me again, just to ease my suburban-reared mind, you see. Mia is too stiff and gimpy these days to run much. The puppy would be no use whatever (except as a smaller and slower sacrificial offering--but I didn't think of that at the time). That left Otty.

I let Otty out of the back hall and started up the lane to the pasture.

I called her. Still nothing.

I walked back down, found her, and announced with appropriate excitement, "C'mon, Otty! We're going for a walk! Let's go for a walk!"

She looked at me for a second, then turned around and went the other way.

Obviously, I did not get eaten by a coyote. I am still burning from that canine diss, though.

* Sometime I should tell you about the time I saw a moose on my way to the bus stop in Alaska, about a quarter mile from our house. I was nine years old. It was pitch black--as it always is at 8 a.m. in the Alaskan Interior in the winter---and I was walking along with my tiny Maglite, and there was a noise, and there was a really big moose on the side of the road, so I turned around and went home. I . . . guess that's it.
Posted by Kristin @ Going Country at 5:00 AM 4 comments:

Labels: all about me, country livin', dogs, wildlife

Welcome to the Wolf Pack

I don't care how impressive a dog's pedigree is, it still has the base instincts of a wolf. If you show the champion of the Westminster Kennel Club Dog Show (a.k.a. the dog show that comes on after the Macy's Thanksgiving Day parade) a moldy old bone, he will be all over it. 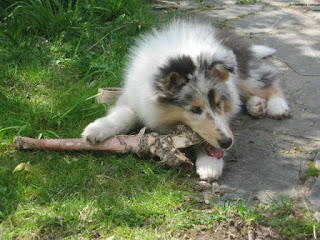 Gifts From the Heart


Both Cubby and Charlie came home from school on Thursday with Mother's Day gifts for me, all wrapped up and ready for today. Cubby has been asking every day since if it was Mother's Day yet. Upon hearing this morning that the blessed day had finally arrived, he ran off to get my gift and I brought out Charlie's gift too, so I could open them at the same time.

Charlie's gift was a bracelet made of plastic beads strung by his very own small hands. "Thank you, Charlie!" I said. "Should I wear it right now?"

"I thought you made it for me," I said, trying not to laugh, because this was so very Charlie.

"I made it for everyone," he replied. "So I'll wear it so everyone can see it on me."

Right. The joy is in the giving for Charlie, obviously.

Next was Cubby's gift. It was a small wooden box in the shape of a treasure chest. Inside were ten little pieces of folded paper, on which Cubby had written the word "love." He explained that it was a kiss box with ten kisses inside, and when I missed him, I should take a kiss from the box.

Oh. Well, thanks for breaking my heart, Cubby's teacher. Sniff.

Further investigation revealed something glued to the bottom of the box, which, when the kisses were removed, turned out to be a photo of Cubby. And what a photo. 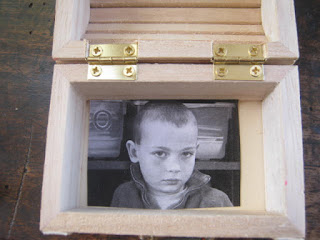 Will he kiss her or kill her? Stay tuned to find out!

Mother's Day gifts from little kids are the best. The end.