Cubby helped me thin the carrots today and got to sample several of the thinned specimens.  The resulting photo can really only have one caption. 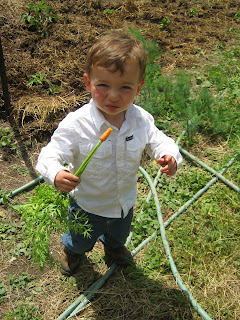 I'm sorry, but you know that was inevitable.
Posted by Kristin @ Going Country at 5:55 PM 4 comments:

Hey, anyone remember what Cubby looked like two years ago?  Yeah, me neither.  Well, let's see . . . 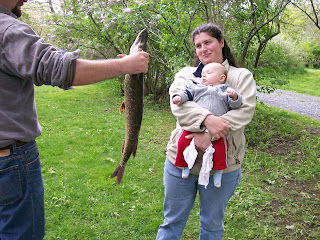 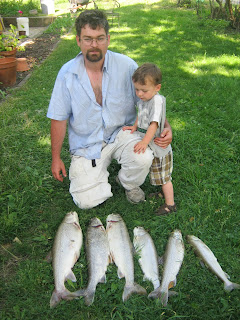 Enormous, much hairier, and still quite skeptical of big-ass fish.

Yes, in what has apparently become an every-two-years tradition, A. and his friend Jason had their all-day fishing marathon today, catching their limit of gigantic lake trout.  The difference this year was that all those fish were caught on a copper reel.

What's a copper reel, you say?  Well might you ask.  It's something no one uses anymore to fish because it requires two people and a hell of a lot of upper body strength.  A friend of Jason's gave him an antique one he was going to throw away.  Jason gave it to us sometime this winter and it's been sitting in the parlor ever since.

I tried to find an image online for you so you could see what this thing looks like, but after a quick perusal of www.antiquefishingreels.com (quick being the only kind of perusal I can grant such a website) the only one that's even vaguely the right shape is this one:

I wish I had taken a picture of Jason's before A. gave it back to him, but I didn't, so this half-assed description will have to suffice.  Jason's is sort of squarish like the one in the photo, but I suspect his must have been homemade.  I'm guessing in the 1930s or something. It certainly isn't all fancy metal like this one.  It's basically a square frame on which is wound a long copper line.  The crank handle is wood.  It's pretty decorative, actually, in a rustic kind of way.  And also, apparently, very good for catching fish.

After a few hours of unproductive fishing with poles, A. and Jason decided to try the copper reel.  As soon as they threw it in the water, they caught a fish.  And they caught fish continuously after that until they had their limit.  They were the only ones on the lake catching anything, despite the number of fishing boats they saw, so it must have been the reel.   Or maybe it was magic.

Whatever it was, they caught a shitload of fish, all of which were filleted and many of which are even now brining in preparation for a session in the Little Chief.

In the contest between the old and the new, the old wins again.
Posted by Kristin @ Going Country at 6:24 PM 3 comments:

It was 75 degrees at 6:30 this morning. That is not right or pleasant and it did not make for much cheer among the Family Blackrock.  A.'s office is upstairs.  Where all the heat goes.  His exact words were, "It feels like a room you would use to season wood."

I presume he was referring to a kiln or something.  Anyway.  Point taken.  It was hot.  So he announced that he couldn't work all day up there and the family would be taking an outing to someplace that had air conditioning.  Which for us means the farm store, the library in the Not-As-Small-City, and then a Korean restaurant*.

But due to the library's hours, we had to wait until after Cubby's noon nap.  So A. worked in his kiln/office in the morning and I took Cubby outside for all of an hour before giving it up and dragging him back inside for ice water and some nice sticky snuggling time of reading books on the couch.

Down-filled couches are not very comfy in an un-air-conditioned home in the summer.  Unsurprisingly.

Then I put Cubby to bed in his also upstairs and therefore broiling bedroom and spent about 45 minutes sweating upstairs in sympathy with him and A. as I continued the arduous process of clearing out all the junk in the former study (currently The Room of Accumulation) in preparation for moving Cubby in there before his baby brother arrives and commandeers the room adjoining ours that Cubby has slept in for his entire 2+ years.

I really hope this works without too much drama.  I also really hope I can refrain from writing another sentence that runs to a full paragraph.  Yikes.

And THEN, after all that, we left the house for our outing to escape the heat.  And OF COURSE, we drove right through an enormous thunderstorm that cooled the air from 87 degrees to 67 degrees in a matter of about five minutes.

It was fun anyway, though.  And I promise this will be the last discussion we will be having about the weather for awhile.

* Except it actually ended up being a pizza place that also served Salvadoran food.  It was pouring rain and we didn't want to walk the quarter mile from the library to the Korean place.  Cubby does enjoy his tamales, though, so it worked out.
Posted by Kristin @ Going Country at 6:25 PM 2 comments:

The Many Faces of 70 Degrees

When it comes to weather, the number indicating the temperature is so very misleading.

Take 70 degrees, for example.  When it's sunny and dry outside during the day, 70 degrees as a high temperature feels lovely.  A little too warm in the sun, maybe, but perfectly comfortable.  Especially if there's a breeze.

But at night, when sticky humidity has descended, 70 degrees as a low temperature feels disgusting. Because 70 degrees outside means 85 degrees in our bedroom. Which means roaring fans, a mostly-ineffective desperation wet washcloth on the neck, and no sleep.

Well, for me, anyway. A. seems to have no trouble.

Thankfully, this weather is supposed to break tomorrow and we'll get back to high pressure and good sleeping weather.  None too soon.
Posted by Kristin @ Going Country at 5:55 AM 6 comments:

That may just be the stupidest phrase ever, but it amuses me anyway.  Before we begin today's discussion about ridiculous seasonal designations, please go here to read the first post I ever did for Memorial Day and take your moment for reflection.  It's the least we can do.


Okay, on with the randomness.

Memorial Day weekend is frequently referred to as "the unofficial start of summer," usually by marketers trying to sell shit like beach towels and ridiculously expensive grills. The official start is, of course, when the calendar says it is.  Which is based on the sun and all that nature stuff.  This year, it happens to be June 20.

Try telling that to my bolting lettuce.

This Memorial Day weekend is most definitely the beginning of summer for the garden.  It's dry.  It's hot.  The tomatoes have grown about four inches in two days*, the spinach is done for, and the beans popped up and grew three inches in a day.  Also, the asparagus is literally growing overnight.

Everything that is going to be planted has been planted. Except I think the leeks, but the MiL takes care of those.  Our next big chore--by which I mean A.'s next big chore--will be bringing a few pick-up truck loads of sheep-shit straw into the garden to mulch the growing potatoes some more.  I'll also steal some to mulch the tomatoes, and that, I think, will probably be about the last useful thing I can do when it comes to weed control in the garden this year.

It's gonna be ugly in there in a month or two, duckies.  But by then we'll all have a new baby to focus on, so there might not be much attention paid to that weedy patch of dirt in any case.

* I know!  I didn't tell you when I planted my tomatoes!  That's because I'm so busy yammering on about woodchucks and diapers.  Priorities.
Posted by Kristin @ Going Country at 4:22 AM 4 comments: