At this very moment, I am waiting for our dinner to be delivered from a pizza place in the next village over.  I don't think food has ever been delivered to this house before, and it's an example of why A. says we don't REALLY live in the country, despite the name of this blog.

I say any place that has a lamb carcass hanging in a barn--as we do, also at this very moment--is real country.

What say you, poppets?
Posted by Kristin @ Going Country at 4:28 PM 8 comments:

Yes!  Kristin's Kitchen is back, now with a new co-host! 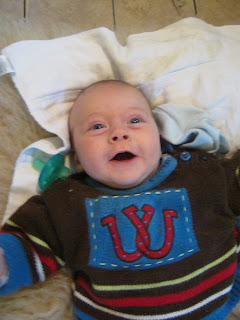 Who is obviously very excited about this new venture, although even less helpful than my other co-host.

Yesterday, A. took over with this one outside: 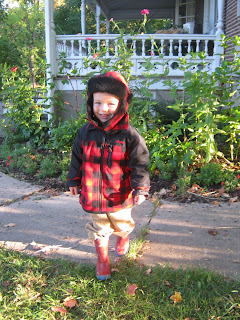 Not to go hunting, although he's obviously ready for it.

While I brought the newer one inside with me to make dinner.  It occurred to me as I was cooking and keeping up a running patter of my actions to the little grub flailing about on the sheepskin on the floor that cooking with a baby in attendance is excellent training to be a host for one of those "cook-it-quick" television cooking shows.

The cook-it-quick part is a given, since said baby has a very limited time in which he will be happy on the floor, and so all prep work must be accomplished before he blows.

The constant talking to keep the baby entertained as long as possible is also a given, and is basically what cooking show hosts do.  "Now I'm cutting up the zucchini.  I'm cutting them into pretty small pieces because we want them to cook quickly and also they won't be so mushy if they're smaller.  So I'm whacking the ends of the zucchini off and then cutting them in half lengthwise . . ."

So I think I'm really ready for my own show now.  I think I'll call it, "On the Stove and On the Floor." 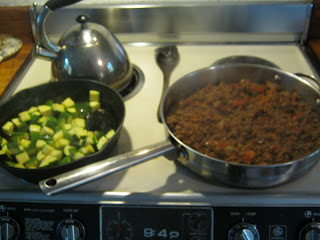 On the Stove (in this episode, taco meat and zucchini) 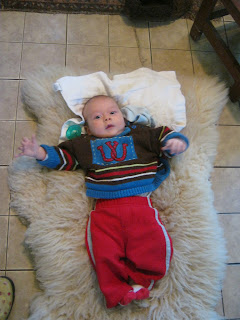 Remember all those Seckel pears we (meaning A.) picked awhile back?  They're just ripe now.  And starting to breed fruit flies.  Which means they need to be disposed of in some edible fashion that does not take a great amount of time that I do not have.

The problem with Seckel pears is that they're really small.  Like, about a quarter the size of the Bosc or Bartlett pears you might buy at the grocery store.  So peeling them is just about the most irritating and time-consuming thing in the world.  This is why I decided to make pear sauce with them.  I washed them, cut them in half, and chucked them stems, seeds, and all into a pot with some water and a couple of cinnamon sticks.  When they were soft, I ran them through the Foley food mill, with the enthusiastic assistance of Cubby.

A food mill, you see, is a tool.  And Lord knows, that boy is ALL ABOUT the tools.

The resulting pear sauce was really, really sweet.  Cubby was a fan, but the rest of us prefer a little bit of tart with our sweet when it comes to fruit sauce.

So, I asked myself, what could I add to the pears that would provide the necessary contrast of tart to the sweet?  How about that bag of cranberries that's been languishing in the freezer since, uh, last Thanksgiving? Tart is pretty much the defining characteristic of the cranberry.  And they sure weren't getting any younger.  Might not be a bad idea to use them up before this next Thanksgiving is upon us, in a mere two months.

So I dumped half the bag of cranberries into the pot with the pears, water, and cinnamon.

Now THAT is a good pear sauce.  Except now it's a pear-cranberry sauce.  But whatever.  It's good.  We like it.  I'll use the remaining half a bag to do the rest of the pears and will end up with about six quarts of pear sauce in the freezer.  Not too shabby.

Beats the hell out of peeling them, that's for sure.
Posted by Kristin @ Going Country at 11:22 AM 3 comments:

A Day in the Life

Our wireless Internet service has been out since yesterday.  The man came to fix it today and found the wire had been chewed by squirrels.  A. has shot four squirrels (the ones that chew walnuts in the attic directly over our bedrooms) out of the maple tree by the porch in the last three days.  Guess he needs to shoot more.

It rained all day today.  Hard.  Which meant we spent all day inside.  And this is what the living room looks like at the end of one of those days: 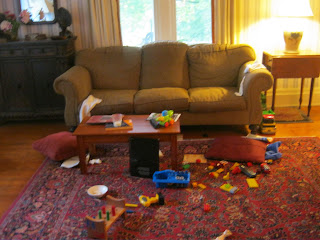 Man, do I hate enforcing pick-up time on these days.  Damned Legos and their thousand pieces.  Keeping a toddler focused enough to pick them all up is a trial.

This morning I heard an ominous scrabbling sound in the woodstove pipe.  Then I forgot about it, thanks to the two screaming children competing for my attention.  After dinner, I heard the sound again and mentioned it to A.  We were afraid it was a mouse or something, but we didn't want whatever it was to die in there.  So A. unhooked the stovepipe and pulled the stove away.  He found a sparrow in there.  He reached in to grab it, but lost his hold on it as he pulled it out and we spent a few minutes chasing it around the dining room.

Cubby thought this was the most fun thing ever.  A. eventually caught it in the corner and released it outside.  But first he gave Cubby a good look. 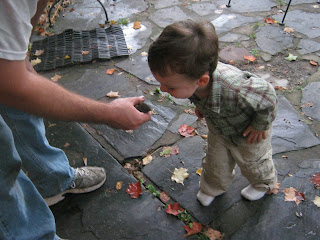 And then there were more books, and more screaming, and the aforementioned dreaded pick-up, and bedtime for the whirling dervish, and now here we are.  Charlie is lounging on the floor watching the chandelier swinging above him. A. is at court.  I'm greatly looking forward to a shower.

Another day in the life of the Family Blackrock.

You know how you're supposed to eat foods of lots of different colors, on the theory that you'll get more varied nutrients and vitamins and phytochemicals and all those other words we all like to spout off without actually knowing what they are*?

Here's a good example of that: 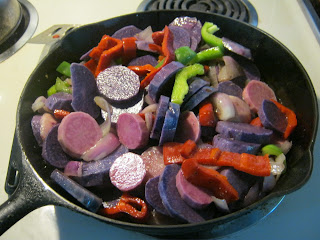 Also a good example of the most luridly-colored dish I have ever cooked.

It was just the beginnings of a standard Spanish omelet-- which includes onions, potatoes, bell peppers, and eggs**--but the potatoes I came to first in the boxes in the Pit of Despair were the pink and purple ones.  It made for a very interesting color palette, to say the least.

Tasted good, though, so we can forgive the psychedelic effect of the weird potatoes.

* Okay, maybe you know exactly what phytochemicals are.  I have only the vaguest idea, and I bet I'm in the majority on this one.

** Perhaps that isn't a real standard Spanish omelet, but since I'm not actually Spanish, I don't worry too much about the authenticity of it.