Long version: I happened to have all the ingredients for this, as well as a great disinclination to trim and prep more of the enormous bowl of elk in the refrigerator.

Everyone liked them, of course, although Charlie ate his BLT deconstructed, because he is an odd child.

Long version: Thanks to the infernal time change last week, Poppy has been getting up punishingly early every day. That's why I fell asleep while she was taking a nap this day. While I was sleeping, A. decided to take care of the elk in the refrigerator. He decided to make barbacoa with it, which is a Mexican preparation involving chile and fat and long cooking.

Unfortunately, the elk requires much longer cooking than the beef called for in his recipe, so it wasn't shreddable by dinner time. It was tender enough that he could slice it, though, and serve it as a soup. So that's what he did.

It seems silly to be serving canned beans when I have 35 pounds of dried pinto beans sitting in my pantry. But since I didn't know we were having Mexican food until afternoon, and therefore didn't have time to make the dried beans, I went with the canned beans.

And for an afternoon snack, elevated pistachios: 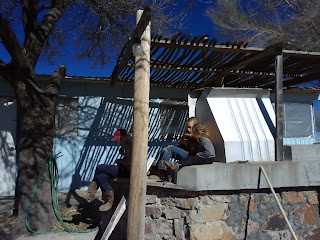 The better to fend off hungry dogs.

Long version: Sick Cubby requested soup to soothe his sore throat, so I made him some creamy potato/bacon/cheese soup. For A., I added some rice to his barbacoa and cooked it some more. Then everyone ate whatever combination of things they wanted.

The salad was made from store tomato and a store cucumber, and was thus disappointing. As grocery store food always is.

Long version: A. had said he was going to make something with the ground beef I had taken out, but he decided we should finish up the barbacoa first. So I heated it up with some cheese and added sour cream to the kids' bowls so it wouldn't be so spicy.

Long version: The ground beef was still in the refrigerator, so I made two batches of meatballs. I browned them under the broiler, then cooked one pan with barbecue sauce for dinner this night and put the other in the refrigerator, covered with marinara sauce, for the next day.

But I can't buy those bags, so it remains an infrequent but always appreciated treat. Probably for the best.

A. finished the last bowl of the everlasting barbacoa.

And speaking of everlasting, these are the last flowers from the mixed bouquet my sister brought with her when she came to visit us . . . four weeks ago. 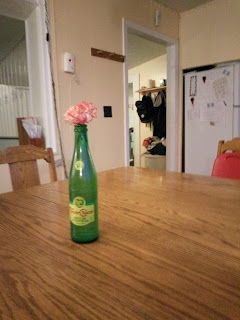 Okay, so I actually chucked these flowers on Tuesday, but that still means they lasted for over three weeks. I find that a bit alarming.

Long version: I had made the marinara sauce the day before when I had the food processor out to make the meatballs, so all I had to do was bake the meatballs and boil the pasta.

I put some Romano cheese on a few of the meatballs for A., and Charlie came in the kitchen and said, "I know what THAT smell is, and I'm not eating dinner."

I assured him that there would be no stinky cheese on his meatballs, though he continued to look highly suspicious until he sat down and sniffed his food.

I was very glad I had mostly prepped this the day before, as this was the day I felt the onset of what Charlie has been referring to as "the family plague."

Long version: I felt pretty awful this day, but colds wax and wane, so during one of the waning periods I shoved a frozen chuck roast in the oven and later, a few potatoes.

At dinnertime, all I had to do was pull the meat apart and add barbecue sauce, plus nuke the peas.

Not the best meal, but this is what happens on sick days when takeout isn't an option.