The End of an Era

Cubby's Crib Era, that is. Yup, my firstborn is now in a real, honest-to-God bed. Cubby took matters into his own tiny hands on this issue, leaving us no choice. There is a long story here, but lemme shorten it for you to this: At 3 a.m. on Saturday, Cubby jumped from his crib.
Or, more accurately, I suppose he tried to climb out in the total darkness and fell. He didn't cry much, seeming more stunned than anything. After checking to make sure there were no noticeable injuries, I brought him into bed with us for the rest of night. He fell back asleep eventually, while I lay there making plans to deal with this latest development.
Those plans were implemented yesterday, by A. taking the crib out and hauling out one of our multiple spare twin-sized bed frames from the barn. He also put locks on the doors in Cubby's room that lead to the bathroom and the Secret Stair and removed the extremely heavy and tippy space heater (hello, incredibly un-child-friendly bedroom!).
I braced myself for several days of no naps and difficult nights. Yesterday I lay down with him in his bed for his first nap in it, and he was asleep within ten minutes. After which I snuck out and left him to it. It was a fairly short nap, but at least he did sleep by himself.
Last night I spent an hour figuring out the best way to get him to sleep. Turns out, he has no need of my physical presence even near the bed. After some trial and error, I eventually ended up just standing in the darkened doorway to his room and every time he'd try an experimental, "Mommy?" to make sure I was still there, I'd whisper it was time to sleep. Which he did, eventually.
He slept nine hours last night by himself in his bed. That might have been due to total exhaustion, but I prefer to see it as a hopeful sign that Cubby will adapt to his new sleeping arrangement without too much drama.
Now watch. Bet he won't sleep AT ALL tonight. But at least he won't be swan diving from four feet up in a desperate bid for freedom. That's an improvement.
Posted by Kristin @ Going Country at 10:51 AM 8 comments:

And I'm Not Sorry, Either

After a fairly crappy day yesterday thanks to pouring rain and The Boy Who Wouldn't Sleep, I was not enthused about going freezer diving to find something to cook for dinner. Which is why when A. had to go to the nearby village for a haircut, Cubby and I tagged along to go to the market.
Also to get out the house. See: pouring rain and no sleeping.
Pork chops were on sale, so I got some of those. And, giving in to a nagging craving I've had ever since a random discussion with my sister on the deliciousness of tater tots, I got some of those too. I hadn't had tater tots in probably ten years, so I was a little afraid it would end up being one of those things where the taste of nostalgia is somehow nauseating in the present day. But what the hell. It was Friday. Might as well get wild.
These two things, along with some frozen peas, were dinner. The sum total of my "cooking" involved opening bags, sprinkling some random spice mix on the pork chops before shoving them in the oven with the tater tots, and putting butter on the peas.
It was really weird making dinner without peeling, chopping, or otherwise prepping anything. But you know what? It was pretty good. And those tater tots were everything I remembered them to be. That is, delicious*. How satisfying.
* Incidentally, Cubby only ate one tater tot. He liked saying the name, but didn't seem to care much about the actual foodstuff. What kind of two-year-old doesn't like tater tots, for God's sake?
Posted by Kristin @ Going Country at 3:56 AM 5 comments:

I may get in trouble with the parents of little girls everywhere by saying this, but I submit that there is nothing cuter than a little boy in formal clothing. 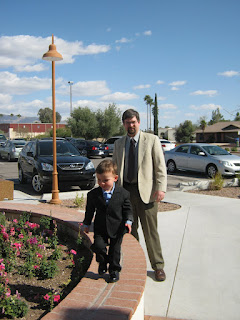 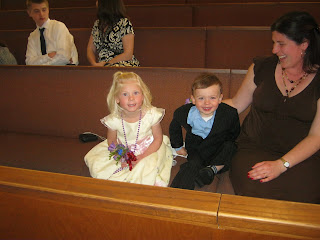 For purposes of comparison, this is Cubby and his cousin. Just ignore that pregnant lady on the right. Nothing is going to make her adorable at this stage. Yikes.*
Too bad the insane suit cuteness was sort of spoiled by the fact that Cubby was actually sick and therefore quite disruptive on the day of the wedding.
Oh well. At least he looked like a child model, right? Maybe that makes up for the fact that I had to take him for a walk around the church to look at the Stations of the Cross during the vows.
Or maybe not.
* Lest you think I am disparaging some poor anonymous pregnant woman, be assured that is actually me. At my sister's wedding, obviously. That's the best I can hope to look now. A sobering thought.
Posted by Kristin @ Going Country at 5:26 PM 7 comments:

There's always so much to do after returning from a trip: running the lake pump to fill the cisterns; getting more chicken food; pulling out the spiles in the maple trees and washing the sap buckets out; doing mountains of laundry.
Perhaps some of those are specific to Blackrock? Yeah.
Spring arrived while we were gone. When Cubby and I left, it was 37 degrees with snow on the way. Yesterday it was 66 degrees with bright sunshine. The crocuses are out in full force, to the delight of the bees getting drunk on nectar. While Cubby reunited happily with his buddy the lawn tractor, I took the opportunity to drag away the remaining lilac branches that have been sitting around since A.'s big pruning job weeks ago*.
If this weather keeps up, which it is supposed to do, A. might actually till the garden this weekend to plant some oats as a cover crop, and we can get in some early lettuce and spinach. The shearer is coming on Monday to get those heavy wool coats off the presumably pregnant sheep. Which means lambing is just around the corner.
Spring has come to Blackrock. Brace yourselves.
* Incidentally, I got a manicure for my sister's wedding. The lady said it should last for two weeks. She was not counting on my particular lifestyle, however. I suspect this sassy bright pink nail polish will have a short lifespan at Blackrock.
Posted by Kristin @ Going Country at 3:45 AM 3 comments:

That's the only word I can use to describe A. and I last night after we completed our cross-country odyssey. We just sat in the living room staring mutely at each other. And this, mind you, is after a trip with no complications whatsoever. There is just no way to get from my parents' house to Blackrock without physical exhaustion.
But make it we did! Cubby was his usual stellar self on the planes, although he had some hysterics when I put him to bed at home. I think he was just really confused. Poor kid has been through a lot of upheaval in the last two weeks. After a brief comforting session to calm him down, though, he settled down to sleep and is still sleeping now, eleven hours later.
A. and I might also still be sleeping, if it wasn't for the goddamn cat yowling in the upstairs hall at 6:30 this morning, presumably for food. Had I had a gun handy, Pitty Pet might have gone to his eternal reward today. Luckily for him, the MiL got up instead and fed him. She's a much nicer person than I am.
That's okay, though, because A. had to get up anyway for court. Life resumes. The family Blackrock is all home at last.
Posted by Kristin @ Going Country at 4:59 AM 7 comments: