Friday Food: Plan Bs All Over the Place

Long version: I'm not entirely sure what the difference is between Swiss steak and grillades, but I'm guessing it's the roux. That is, with the roux, it's grillades. Without the roux, I'm calling it Swiss steak. These days, I'm usually too lazy and pressed for time to make a roux, so I guess I make Swiss steak with my cube steak now.

I added some bell pepper this time, too. Is that still Swiss steak? Hell if I know. I'm gonna just call it Kristin steak, okay?

Long version: This was not my plan for dinner. I had taken out two big arm roasts to make pot roast, but they didn't thaw in time. Plan B was pancakes. The kids were very happy with this plan. 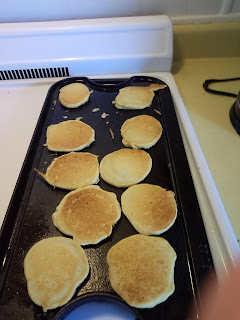 This right here is a griddle pan full of my children's dreams coming true.

I gave them the peas, still frozen in a bowl, to eat while I was cooking pancakes. I considered this their vegetable. It would have been too weird to serve a salad with pancakes, anyway.

Long version: I found when I went to peel potatoes that I only had two left. Okay, then! Potatoes for the adults; leftover rice for the children. Happiness all around.

The greatest happiness was thanks to A. replacing my broken kitchen sink faucet with a spare faucet he found on the (non-functioning) sink in his shop. It was a perfect fit, and has the benefit of being made of metal rather than the dreaded plastic. 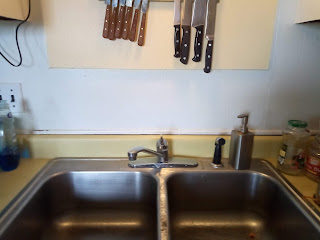 Okay, so it's maybe a little crooked, but it was free and it's metal and I will take it, thank you.

Long version: Yes, I made the corn tortillas myself again. You may recall my prediction that this would happen if I once tried making homemade tortillas. It did.

When I made the pot roast, I purposely didn't use any particular seasonings--just onion, garlic, a can of tomatoes, and a bay leaf--so that I could re-purpose the inevitable leftovers. Thus, to make the taco filling, I just fried some cumin and chili powder in oil, added the diced leftover meat and the remaining sauce, plus a little water, and simmered until thick.

I didn't have a potato for the pinto beans this time (sorry, Miss Amelia), so it was literally just beans, water, and salt. They were still good.

I had both sour cream and avocado this time, so those with the beans and the homemade tortillas made me very happy.

And that is why I do crazy things like make my own tortillas.

I sneaked away to make the tortillas while this was happening: 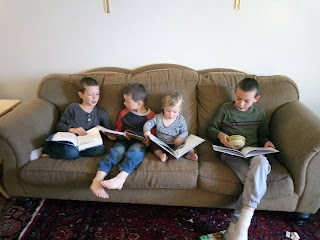 Hooray for literacy. And pretend literacy.

Long version: Once again, this was not my plan for dinner. Once again, my plan was derailed by the incredibly slow defrosting of meat here.

I don't know what it is about this climate--lack of humidity? altitude?--but frozen stuff takes FOREVER to thaw here. If it's something easily thaw-able like ground beef, I can take it out in the morning and get it defrosted in time to cook it by completely unwrapping the meat and putting it in our oven, which has a pilot light that makes a tiny bit of heat. But a lot of stuff just won't thaw if I don't take it out the night before. Like the arm roast from Saturday. Or the stew meat this day.

I still had some of the pot roast left, so I used that to make a beef and vegetable soup. The only unusual vegetable addition this time was the lamb's quarters I asked A. to grab from our excessively weedy back pasture. Might as well get some benefit from that terrible mess.

The omelet was to supplement A.'s soup and also provide something other than soup for the one soup-averse child. That child had still-frozen green beans to fulfill his vegetable requirement. And this made him happy.

Long version: No stew again this day because we spent the morning at a friend's ranch watching calves get branded (and vaccinated, tagged, castrated, and de-horned). 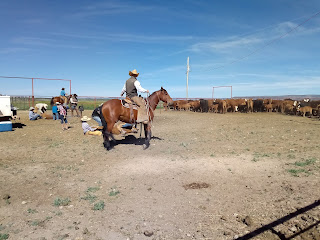 It was a very Western scene.

The cows and calves weren't having much fun, but my kids sure were. 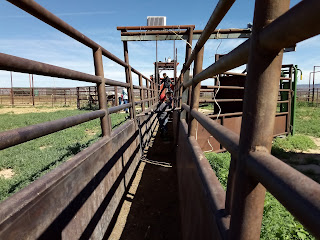 Better than a playground.

We stayed for lunch and didn't get home until early afternoon, at which point I was kind of exhausted and definitely in no mood to prepare stew.

So instead I thawed some pork steaks, chunked 'em up, and fried them in bacon grease with paprika, diced onion, and some of A.'s garlic that he pulled up.

Long version: The stew meat once again stayed unloved and unprepared in the refrigerator, this time because we took the boys to the dentist 90 miles away. This of course turned into an all-day excursion that involved a stop at a nursery where I was planning on getting some annuals for the front flower bed. I was most definitely NOT going to get any more tomato plants.

I got four Juliet tomato plants. A. got a fig tree. We cannot be trusted at nurseries.

By the time we got home at 3:30 p.m. and A. and I had prepared a couple of troughs to plant the tomatoes and a dozen sweet pepper plants that unexpectedly germinated from seeds I took out of grocery-store mini bell peppers and stuck in a random container of potting soil, it was almost 5 p.m.

I hadn't thawed any meat, but there was quite a bit of pork left from the night before. So I peeled and diced several potatoes, fried those in some bacon fat and butter until they were soft, then added the leftover pork and more paprika, salt, and garlic powder.

Then I went out and planted all the seedlings. I am going to have a shitload of bell peppers if those plants all produce.

I don't have to go anywhere tomorrow, so tomorrow is Stew Day. As it is promised, so shall it be done.

Excitement ran high on Friday in anticipation of the big race. I had our registration confirmation printed out; a plan for snacks to pack that night; a good idea of what the weather was going to be (cloudy, 45 degrees, and a slight chance of rain--lovely); and a scheduled wake-up time of 4 a.m. so we could be there to register by 7:45 a.m.

And then A. got sick.

So we didn't go. It was disappointing.

Well, Cubby and I were disappointed. I'm not sure anyone else really cared very much.

In any case, A. slept 14 hours on Friday night, rested all day Saturday, and was mostly recovered by Sunday.

And so, on Sunday, we had our very own 5K race. 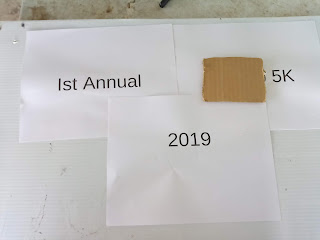 "1st Annual" might be ambitious, as it seems unlikely there will be more, but you never know. Anyway, it sounds more official.

I printed out numbers for the participants. I promised that everyone who completed the race would get hot cocoa with marshmallows and a bacon and egg sandwich.

After church, everyone got their numbers pinned on, lined up at the starting line--our gate--and I got one picture before I started the stopwatch feature on my cell phone. 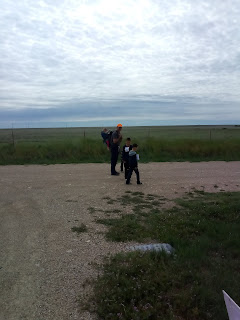 There are no pictures after that because I didn't want to interrupt the all-important race clock to switch to camera mode.

A. did a half-mile loop with Jack and Poppy in the pack, so they could complete their promised 1K race. I ran one of the mile loops with Cubby and Charlie--or rather, behind Cubby and Charlie--before we came up on A. with the other two. Jack had decided he wanted to do the longer loop. I had to send A. back to the house to check the time for Cubby and Charlie when they finished. I told him I would look out for Jack.

Jack ran about another quarter mile with me and Cubby--Charlie was way ahead of us--before falling, scraping his hand, and wailing he wanted to go home and get an ice cube. Cubby went on ahead and I hauled a crying Jack the remaining half-mile home to get him his ice cube.

So I officially scratched on the race.

That's okay, though, because that meant I was on hand to put up the finish-line ribbon. Which was a roll of paper towels stretched out across the road for Cubby and Charlie to run through at their big finish. The wind kept trying the rip the paper towels before they got to them, but Jack and I managed to have at least a short length intact for the exciting moment.

And that was it. Everyone came in and had their cocoa and sandwiches. It was, admittedly, definitely lacking in the excitement of a real race with the cheering crowds and official clock and everything, but on the other hand, we didn't have to drive five hours or get up insanely early.

We have a tentative plan to try to do a 5K when we're in New York this summer, but if that doesn't happen, we did run a 5K with the kids as promised. Just not exactly the way it was promised.