This Should Probably Embarrass Me

The next village over from us boasts a small supermarket. Very small--kind of like a miniature supermarket. I go there a lot because it's much easier to drive ten minutes and deal with their limited selection than drive the extra fifteen minutes into the Small City to go to a regulation-sized supermarket. This small market has most of what I need, anyway, and they have a surprisingly good meat department.

They also have a whole refrigerated room devoted solely to beer.

The way the beer room is laid out is with shelves around the perimeter and boxes in an island in the center. So there's an aisle that runs around the circumference of the room. The room is about 10 feet by 24 feet, which makes it a perfect refrigerated running track for children. Formed by beer.

My kids will not go to that store without going into the beer room. And then they literally run laps, with Charlie shrieking "BEE-AH!" the entire time, beside himself with joy.

As I said, it should probably embarrass me, but I must admit I find the whole thing so amusing that I don't try to rein them in at all. Unless there's another person who wants to come in, of course, but so far that hasn't happened.

Good thing. I'd hate to deprive them of their exercise routine.
Posted by Kristin @ Going Country at 6:05 PM 3 comments:

Charlie and I were hanging out on the lawn yesterday afternoon watching the traffic go by while Cubby foraged for green beans in the garden*. At least, I thought that was what he was doing; turns out, he was foraging for something else.

He came running up to me with "an enormous squash!" he found. It was really more like a small pumpkin from a volunteer vine that came up over by the sheep shed. And it was most certainly not done growing. But since it was a volunteer and most likely not edible anyway, I didn't care that much. Besides, Cubby had plans for that pumpkin. "We can make a jack-o-lantern, Mommy!"

One nice thing about Cubby: He is never lacking in enthusiasm. And even if I am sometimes (always) lacking, I can fake it.

So we made a jack-o-lantern. 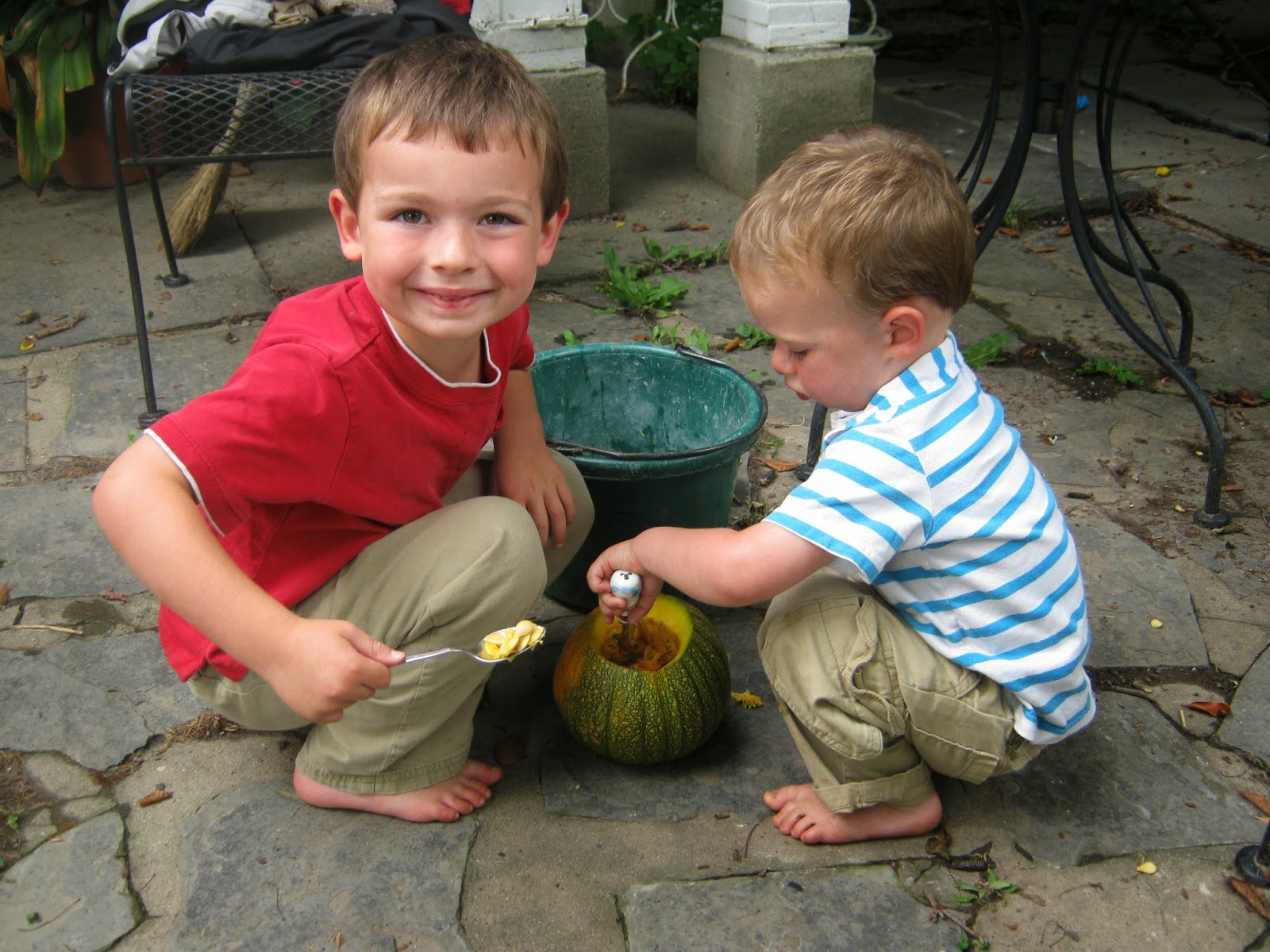 Scooping out the guts with a smile. 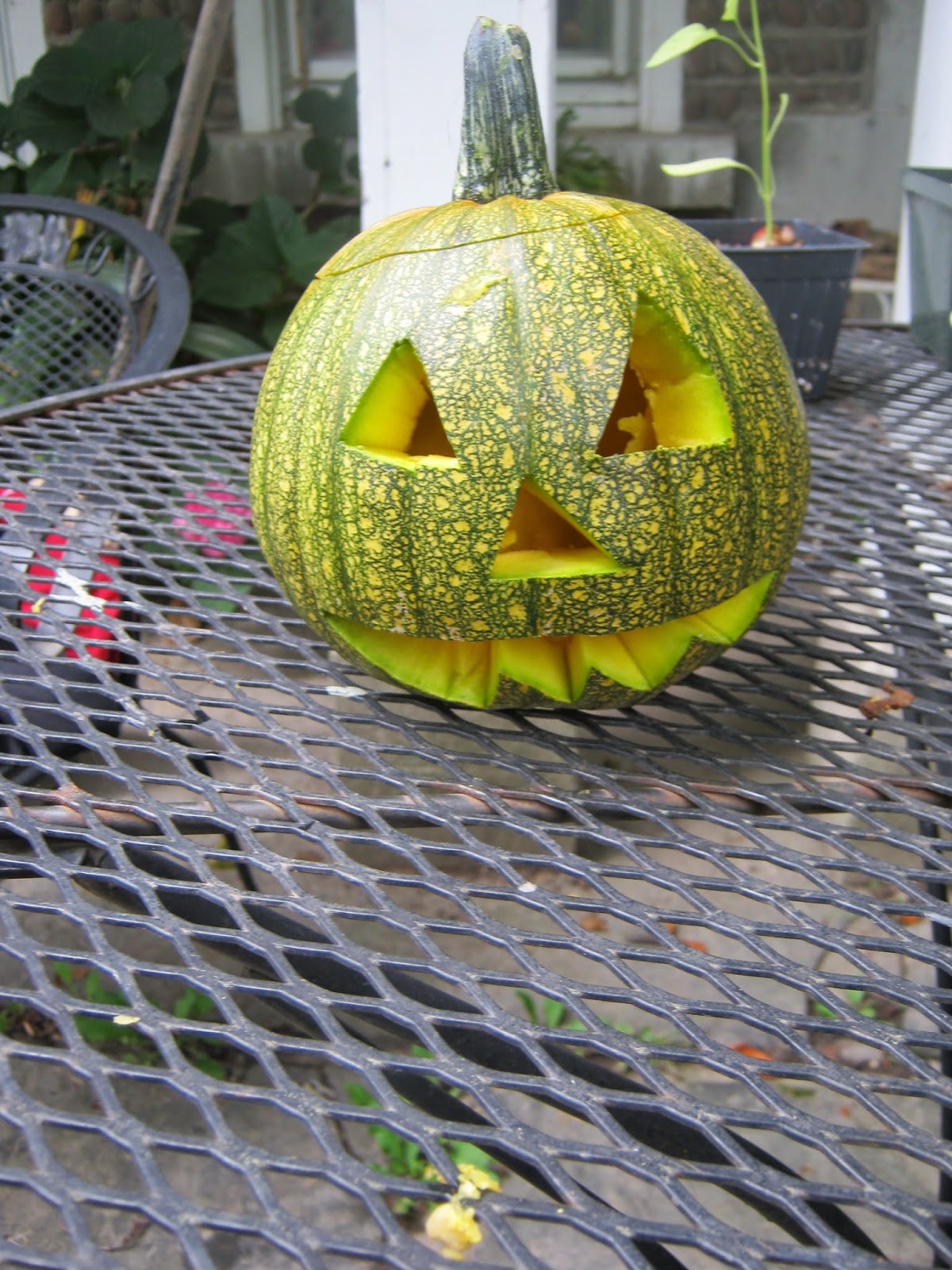 I prefer to think of my pumpkin carving style as "classic" rather than "boring and crappy."

While I was inside putting the large, serrated knife safely out of reach of Charlie, Cubby got to work with his pocket knife and a leaf. 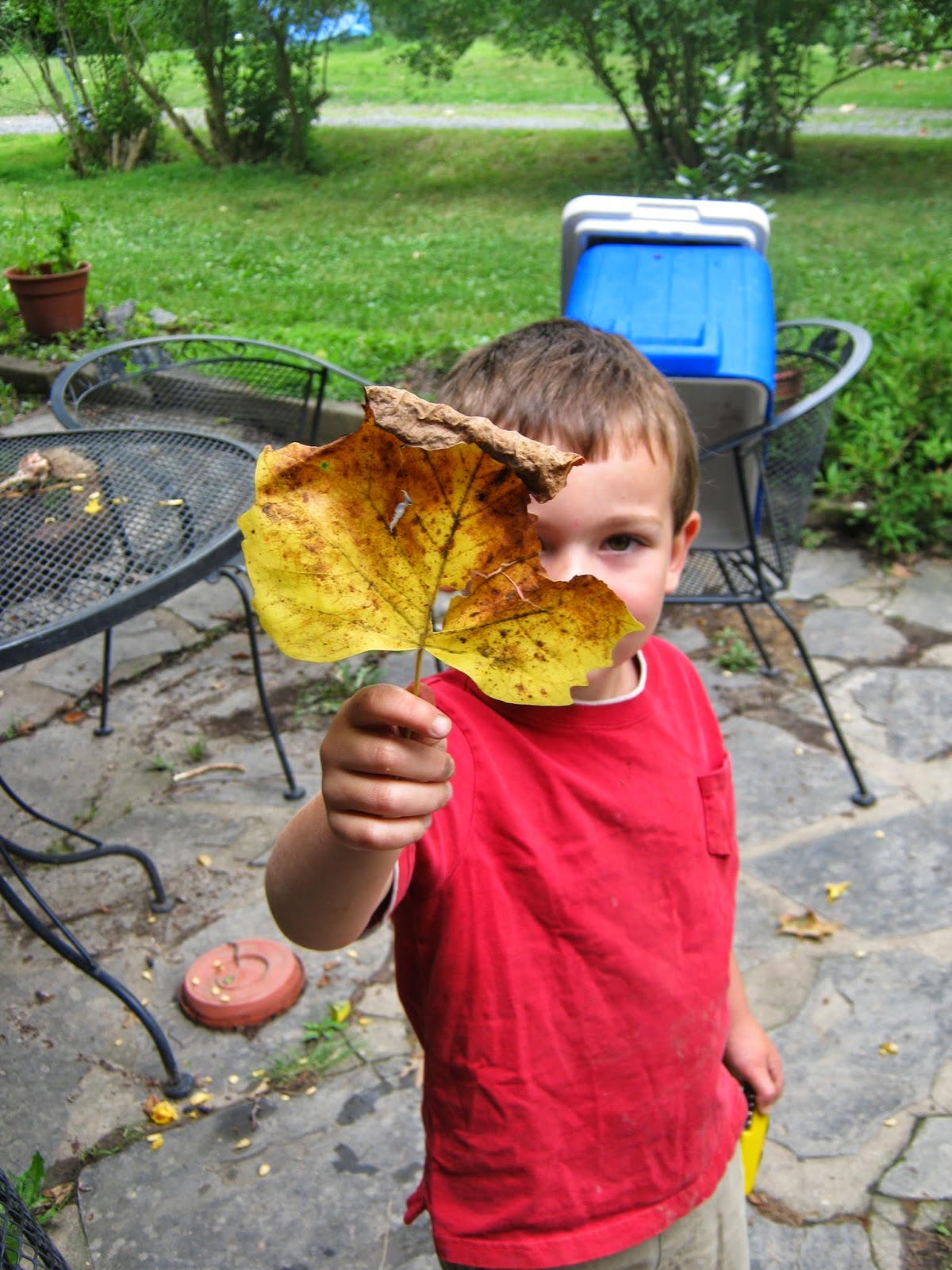 We still haven't illuminated it yet, since it doesn't get dark until 9 p.m. and my children are not awake at 9 p.m. Hell, I'm barely awake at 9 p.m. I suppose I could light it in the morning, since it's still mostly dark at 5:15 when Charlie wakes up, but somehow I'm lacking in festive Halloween cheer at that hour in the morning.

No matter. The making of it was the fun part, anyway. And there are more pumpkins where that one came from. Assuming I can keep Cubby the Stealth Harvester from picking them all before October. No promises.

* The one reason above all others I must always grow vegetables: My kids will eat ANYTHING if they can pick it straight from the plant and shove it right in their mouths. But if I dare try to serve them a cooked version of the very food they ate half a pound of in a raw and unwashed state? It's suddenly anathema. Weird little creatures, those kids.
Posted by Kristin @ Going Country at 6:36 PM 3 comments:

Old Photos Are the Best Photos

I was looking through some old photos on my laptop (nope, still haven't gotten all that organized) and I came across this one*. I couldn't help but laugh at it. 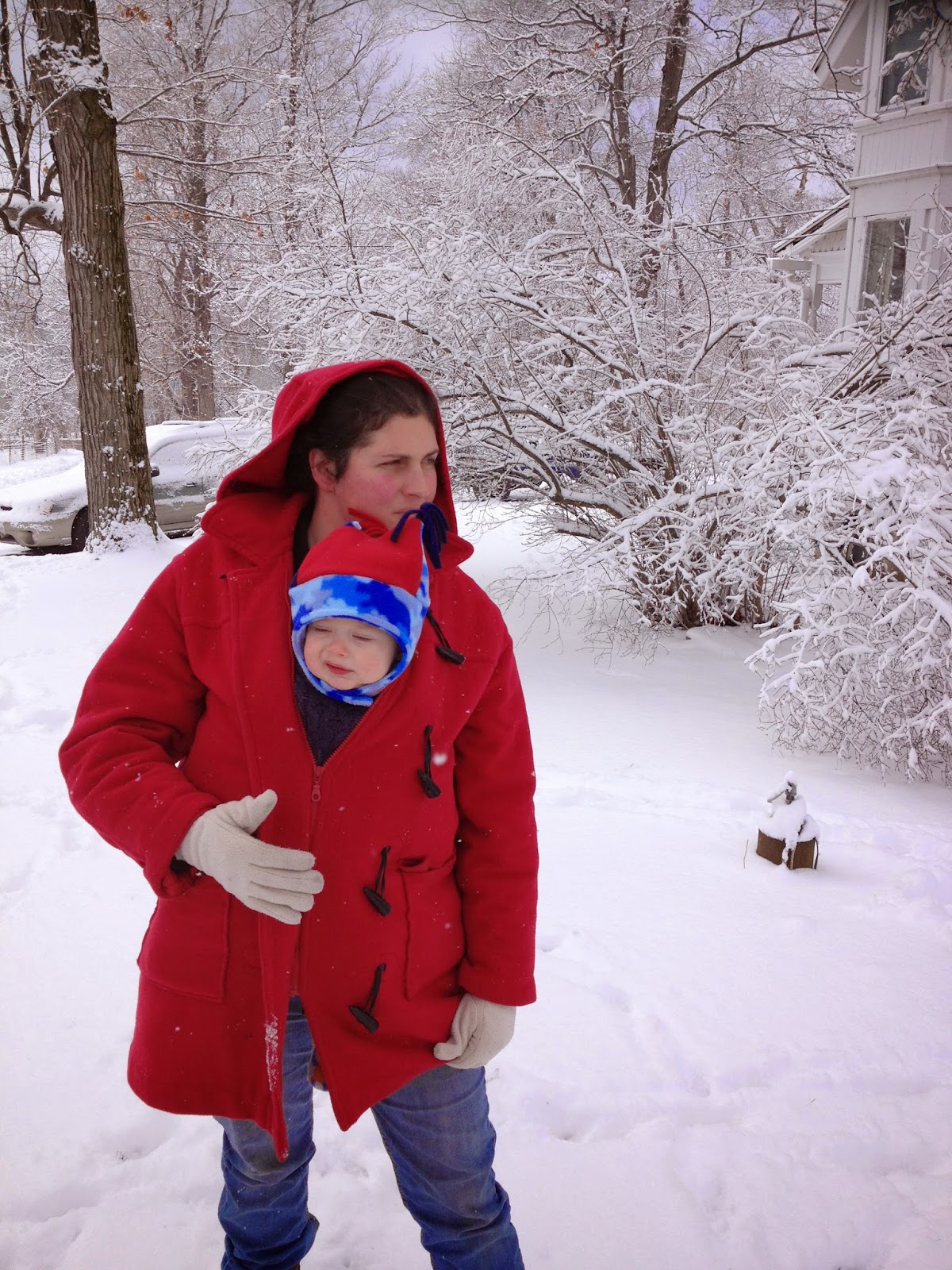 Bet you laughed, too.

I stopped laughing pretty quick, though, when I realized that all too soon I'll be wearing that coat in that weather with that baby carrier and an even smaller baby riding in it.

Winter is coming. And so is the baby. Brace yourselves.

* Taken by my sister a year and a half ago when she and my mom came for Cubby's third birthday party. Good times.
Posted by Kristin @ Going Country at 6:16 PM 3 comments: