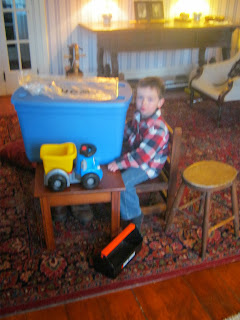 The requisite explanation: This is Captain Cubby of the ill-fated SS Edmund Fitzgerald. Which did indeed suffer its historically unfortunate end . . . 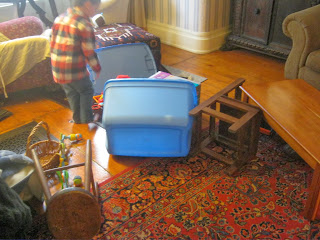 The captain went down with the ship. First mate Charlie was bunked down for his morning nap and missed the tragic events.
Posted by Kristin @ Going Country at 6:43 AM 1 comment: 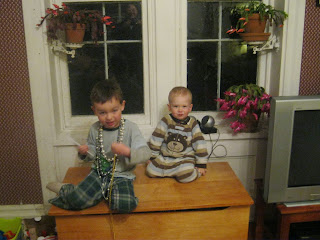 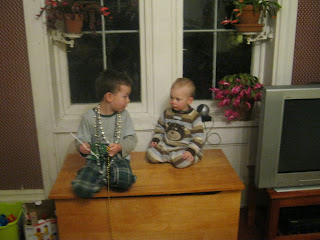 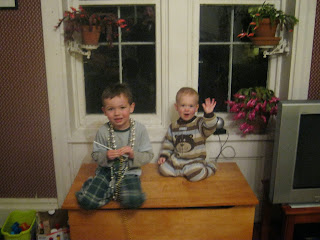 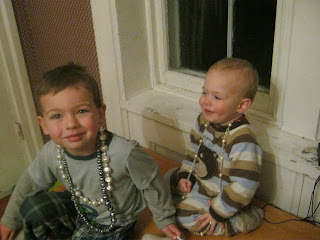 P.S. Since it may not have been obvious to you--or to me--what exactly is going on here . . . the toybox is a boat. Cubby is fishing for little Jack Sharp the stickleback (please see The Tale of Mr. Jeremy Fisher for an introduction). Charlie is awaiting his chance to purloin another of those fabulous necklaces. And no, I do not know why the necklaces are crucial to this fishing expedition. I don't ask questions like that. I just laugh and take pictures to embarrass them with later.

A. is even now driving to a farm on the other side of the lake to pick up a whole pig. In boxes, I mean, not a whole live pig. This is a pig I ordered about four months ago. I gave the farm my butchering instructions, and then I never heard from them again. After a month or so, I wrote them off as flakes and forgot about it.

Imagine my surprise when Smitty (yes, that is his real, honest-to-God name) called last Friday to tell me my pork was ready to be picked up. Surprise and delight, because REAL HAM. That pink, wet stuff you can buy at the grocery store? I'm sorry, that is not real ham. It is a hideous, nasty, completely unappetizing imposter that I can't even eat anymore.

But real ham . . . oh, real ham. I love it so. We're having ham steaks for dinner tonight, and I am unreasonably excited about it.

As if you couldn't tell from the previous two paragraphs.

In addition to the 200 pounds of pork that will shortly be residing in my freezer, we also have a deer hanging in the shed right now. It was the result of A. coming home from work early yesterday and deciding to hunt the last couple of hours before dark. He shot a six-point buck in the gully and dragged it home just as it was getting dark.

Cubby was very excited and tried to commandeer the gutting knife and hatchet (used to hack through the tough rib cage). He had to content himself with his flashlight, however, with which he very helpfully illuminated the deer so A. could see to gut it. Charlie stood there contemplating the deer. He tried to grab its nose, but I stopped him. Not that a dead deer's nose was going to hurt him or anything, it just seemed wrong somehow. He did like the antlers, though.

With the aid of his car's headlights illuminating the shed, A. got the thing hung up to age for a week or so before we butcher it.

Oh! AND! The MiL came home yesterday with the exciting news that she stumbled across some kind of food market at work where she found two organic kraut cabbages for me. I've been looking EVERYWHERE for non-pesticide-laden cabbage to make sauerkraut, and failing. We usually grow enough cabbage for sauerkraut, but this year the cabbages pretty much just rotted from all the rain we got early in the season. And apparently no one else grows it (organically) to sell. Except this one guy the MiL happened to find.

So pork, sauerkraut, and venison. We're ready for winter.
Posted by Kristin @ Going Country at 7:21 AM 4 comments:

Labels: all about me, Charlie, country livin', Cubby, fun with food, the A team, wildlife 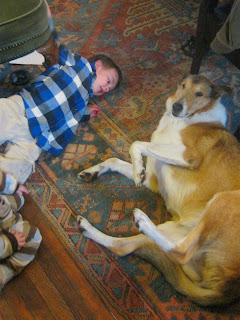 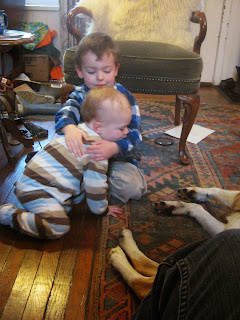 And a headlock masquerading as a hug.

Just a couple of quick snapshots of the view from my chair by the woodstove. What's your view right now?
Posted by Kristin @ Going Country at 8:37 AM 5 comments:

Labels: all about me, Blackrock, Charlie, Cubby, dogs, family

To Coin a Phrase

Or maybe there already is a  phrase for this: That particular kind of irritation bordering on rage that results from telephone transactions with banks, health insurance companies, cable companies, computer support lines, and pretty much any other business that requires the caller to press numbers, wait on hold, and listen to Muzak.

I spent an hour today being shuttled between various departments to fix problems that should already have been taken care of. Things that were a result of incompetent handling the previous times I spent an hour on the phone listening to Muzak. It's a not-uncommon fact of modern life, but holy hell, is it ever bad for the blood pressure.

So what should this feeling be called, do you think? Customer service rage? Muzak anxiety? Not that giving it a name makes it any more bearable, but at least it gives me something to ponder as I wait. And wait. And wait.
Posted by Kristin @ Going Country at 8:28 AM 5 comments:

Charlie has recently entered The Climbing Phase. It is a phase that strikes fear into the hearts of parents everywhere, because you're liable to leave a room in which your child is safely and happily playing on the floor and re-enter the room thirty seconds later to find that the child has shinnied up the rocking horse and onto the long table, from whence he can reach the quite pointy letter opener that you thought was out of reach.

To use a not-so-random example.

How about another not-so-random example?

Last night I was putting the leftovers from dinner into a container for A.'s lunch and I turned around just in time to see Charlie had climbed up onto the table via my chair. He had taken the remaining tablespoon or so of butter out of the butter dish and proceeded to down it in two bites. 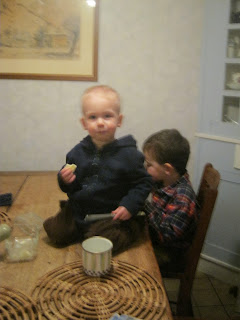 So of course I took a picture, because it was kind of cute, albeit also kind of dangerous and a LOT gross.

Maybe in future I should save myself the effort of feeding him a well-balanced meal and just put a stick of butter on his tray.