A few days ago, when Cubby was screaming and A. was attempting to find a distraction that did not involve me, A. asked where the rattle Cubby likes was*. It was upstairs, where I wanted to keep it so I could continue to distract him from nursing for five minutes when I'm trying to get ready for bed. But I figured all I needed was something that makes noise. I mean, it doesn't have to be really child-friendly yet, as he can't grip it yet to shove it in his mouth or shake it himself. How hard can it be to make something that rattles, right?
Enter the empty glass spice jar with kidney beans inside.
It works great. Of course, it will have to be discontinued when Cubby is big enough to possibly get the top off, because I think kidney beans are the very definition of "choking hazard."
But for now? Cubby is quite happy with his woodchuck rattle. And if Cubby's happy, so are we.
* Thanks, Aunt Marilyn! Anything that keeps Cubby quiet for 30 seconds is aces.
Posted by Kristin @ Going Country at 9:46 AM 5 comments:

Today I'm taking my first outing to the Small City without Cubby since his birth. Actually, it's the first outing without Cubby in, like, a year, since he was technically with me for nine months before he was even born. Albeit inside instead of out.

I'll be gone for two whole hours, leaving A. to baby-wrangle in my stead. This two-hour reprieve necessitated a ridiculous amount of prior planning to make sure Cubby won't go hungry if he should happen to wake up while I'm gone. A hungry Cubby is an ugly thing.

Oh, and where am I going on this most excellent adventure? The doctor. And the grocery store. And you know what? I'm excited about this.

Labels: all about me, baby stuff, Cubby, randomness

Last week, Cubby decided he was not going to be having this business of being put in his bassinet for naps during the day. He'd be almost asleep, so drowsy his head was floppy and his eyes just barely slit open, and then I'd put him in his bassinet to sleep and the screeching would commence within minutes. Irritating.

One day I had just put Cubby down and begun the dishes when the screeching began. Reluctant to abandon my hot water to cool down while I tried to get him back to sleep, I instead brought him into the kitchen with me and put him in his car seat, which was fortuitously sitting on the dog couch. My reasoning was that he always slept really well in the car. And since the radio is usually on in the car, I figured it wouldn't hurt to turn on the radio. There's a small radio/CD player in the kitchen. The CD that happened to be in there was Johnny Cash (this one, as a matter of fact). And as soon as "I Walk the Line" started, Cubby was out.

It works almost every time. I put the CD on, and he sleeps right from "I Walk the Line" through 27 songs (including his theme song) to "Ghost Riders in the Sky." I haven't tested this technique with any other music; for all I know, he would sleep through polka music, too. But I think Johnny Cash's deep voice can't hurt. Though I might discontinue use of this CD by the time he's old enough to understand the wealth of lyrics about prison, drinking, and murder.

But for now? Keep on singin' about those Folsom prison blues, Johnny. Cubby can't get enough. And neither can I.
Posted by Kristin @ Going Country at 8:18 AM 9 comments:

The Taste of Death

Okay, that might be just a bit of hyperbole, but still. Can I just tell you that the taste of reheated poultry is the most abhorrent taste in the world to me? For real. Especially if it's reheated in the microwave. The taste of it makes me want to vomit. Pork isn't so great either, but not as bad as chicken or turkey.

The interesting thing to me is that A. and the MiL do not have this problem. But my sister and my mom do. Is it genetic? Is it picky eating? Do YOU find the taste of reheated chicken revolting?
Posted by Kristin @ Going Country at 7:29 AM 12 comments:

Labels: all about me, family, fun with food, randomness

One of the legacies of my childhood that will stay with me forever is the necessity of thank you notes. We always wrote them. ALWAYS. Not writing a thank you note was very, very rude and just not acceptable.

I still feel this way, and still send thank you notes promptly. Which is all well and good when there's only one or two gifts that require expressions of gratitude. Then I had a baby, and good LORD, do people love to buy things for babies. Since Cubby can't write yet (we're working on this, but he's having some trouble with his "y"), it falls on me to let everyone know how pleased he is with his wee little shorts and flannel shirts*. So here I am, writing thank you notes on Cubby's behalf with regularity. I picked up a package of 50 thank you notes awhile ago, thinking it would take me forever to get through it. Yeah. I probably have maybe ten left. And the gifts keep coming. I'm going to have to buy another box.

And teach that kid to write already. Though I should maybe concentrate on getting him to actually hold a pen first. Or control his bowel movements. One thing at a time.

* I've received a couple of flannel shirts for Cubby, and they may be my most favoritest item of clothing so far. A. wears flannel shirts a lot, so Cubby's are like mini versions of his father's. I find that unbearably cute. Cubby isn't actually big enough to wear any of them yet, but when he is, you can bet there will be a father/son flannel shirt photo.
Posted by Kristin @ Going Country at 7:18 AM 9 comments:

So Much for That

I have a vague, hazy memory of some fun and entertaining post I was going to write today. I'm pretty sure it had something to do with the photo below. It's gone now, though, thanks to last night's endless feeding frenzy and accompanying spit up. Cubby's, obviously, not mine. So you'll just have to hope he sleeps tonight so my brain will actually function well enough to write something of worth tomorrow. 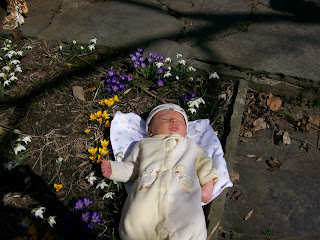 He sleeps great when the sun is shining. Contrary little punk.
Posted by Kristin @ Going Country at 8:21 AM 10 comments:

The Excitement the Afternoon Brought

You may have thought nothing could top the shearing yesterday morning. And you'd be right, because I really can't express how happy it made me to have someone come with a nice little machine and whip those fleeces off in an hour, with no participation by me other than catching the sheep and bagging the wool. I'm not sure sheep wrangling is on my doctor's list of approved activities for five weeks postpartum, but I never actually asked, so he never actually forbade it. Plus, I would a hundred times rather chase sheep around a pen and catch them than chase them, catch them, AND hold them down for hours while A. shears.

Back to the afternoon excitement. Which was probably only really exciting to me. While Cubby was sleeping off his latest milk glut, I dropped him in his car seat and hauled him outside with me to work in the garden. Well, HE didn't work in the garden--he slept. I, however, planted lettuce (Black-seeded Simpson, Harmony, and mesclun mix) and radishes (French Breakfast) in a little bed A. had kindly dug for me earlier. And then, just for fun and because I was out there and dirty already and Cubby was still sleeping, I proceeded to dig up dock plants. Which is actually not at ALL fun, because did you know dock plants have taproots that reach to the center of the earth? Yes. Or at least, that's what it feels like when you're trying to dig those sumbitches up.

Then Cubby woke up, ready for more milk, and that was the end of the gardening. But the planting season has officially started. And we're off to the races . . .
Posted by Kristin @ Going Country at 7:25 AM 3 comments: