Happy birthday to
my sunshine. 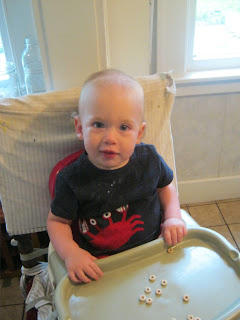 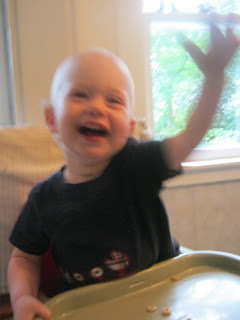 The MiL had to wander far afield yesterday and luckily went past the farm that sells Jersey cow milk. Jersey milk, for those of you who have never had the great pleasure of encountering it, is just about the best milk there is. It has a higher fat content than the ordinary milk you get at the grocery store--which most likely comes from Holstein cows--and that makes it that much more delicious.

Jersey milk is the Rolls Royce of milks. And it elevates my already-beloved coffee with chicory to something approaching ambrosia. I'm drinking it right now. It's a good start to the day.

This day will also include some spectacular weather. It's supposed to be about 78 degrees with sun and low humidity. This has been a relentlessly humid summer, so it's nice to dry out a little.

And most importantly, my parents are at this very moment asleep just a mile down the road from Blackrock. At least, I assume they are. They were supposed to arrive at their rented cottage around midnight last night. I didn't wait up for them, because I don't love them that much*.

But they love Charlie enough to fly all the way from Arizona for his first birthday. Lucky boy.

It's going to be a really good day.

* J.K.! I totally would have waited up for them. But only if they promised to get up at 5:30 a.m. with my children. Mothers of small children do not stay up until midnight if it can be at all avoided.
Posted by Kristin @ Going Country at 3:16 AM 8 comments:

Labels: all about me, family, fun with food, weather

That Mom, with That Kid

There's a small theater in the nearby village that hosts various kinds of performances regularly, including things for kids. You know the kind of thing--people with puppets, people with banjos, people doing magic. Whatever. I try to take my kids when I can, because it's good for them to get out of the house and see people other than me sometimes. But the truth? I hate going to this stuff.

Not just because of the cringing induced in adults by watching a grown woman wearing a bonnet and making a caterpillar puppet sing songs (what, just me who cringes?), but because I am always That Mom, with That Kid.

You know That Mom: The one who spends the whole time pulling her kid off of things and away from things, trying to get him (or her) to sit down, to talk quietly, to not jump off of the ramp to the side of the theater or run to the front of the theater to demand loudly if those (puppet) eggs in that (puppet) nest have baby birds in them.

To use some not-at-all-random examples that were pulled from our theater-going experience just today.

I have no idea how it is that other children Cubby's age manage to sit still for 45 minutes of puppets and singing, because I'm pretty sure Cubby would have to be both drugged and shackled to the chair to accomplish that feat. I don't even bother trying to make him sit anymore, settling instead for having him stay in a mostly-controlled area where he's not leaping in front of other people or tripping them when he lies down on the floor. Which he always does, inexplicably.

To add to the fun this time, Charlie spent most of the performance in my lap, trying to reach the hair of the woman sitting in front of us. I managed to keep her from being scalped and only had to quell two fits from Cubby. I do this by pulling him--screaming (him, not me)--down the aisle to the back, where I kneel down and quietly tell him that he can calm down and keep watching or we can go home. He elected to stay, so obviously he's getting all kinds of culture from these outings.

He'd better be. I'd hate to think I'm suffering needlessly.
Posted by Kristin @ Going Country at 10:07 AM 8 comments:

Labels: all about me, Charlie, Cubby, randomness

With the exception of finishing the painting of the bathroom shelves (FINALLY), I have not done one damn thing to prepare for the thirty or so people who are coming on Saturday to celebrate Charlie's first birthday.

Well, except for some food prep: 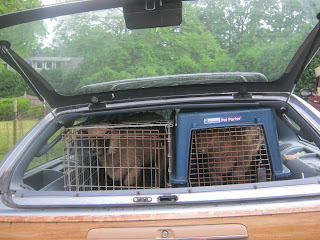 Yes, those are indeed two of the lambs, and they are indeed enclosed in dog crates in the back of A.'s Roadmaster for a trip to Bill the Butcher's*.

You may well ask why the lambs are in the back of a station wagon. Because A.'s truck is full of scrap metal that he didn't manage to get to the scrapyard this past weekend, and he didn't want to unload it all and then load it again just to transport sheep. And what is a station wagon for but hauling?

Admittedly, perhaps the fine folks at Buick were not envisioning livestock among the items to be hauled in the back of this particular station wagon, but they were good enough to make the back spacious enough to accommodate two lambs. Besides, A. is just carrying on a family tradition. His great uncle once transported a few pigs in the back of a Cadillac.

Anyway. The lambs have been brought to Bill the Butcher. One of them will be turned into leg roasts and various other packages of meat for our alarmingly empty freezer, and the other will be left whole to be roasted on Saturday as the main course of Charlie's birthday feast.

Charlie, you may remember, is all about the meat, so this is only fitting.

Now I just have to figure out the rest of the food and drinks and how to set everything up and how to entertain the children and buy the napkins and plates and candles and . . .

Well. Now I just have to do everything else. But at least we know there will be lamb. How bad a party can it be if there's lamb?

* Just in case anyone is wondering why we're not just butchering them ourselves . . . The gutted lamb is supposed to hang for several days at around forty degrees, which improves the tenderness and flavor. As it is currently July and approximately double the recommended temperature for hanging meat, we had to pass that task off onto Bill and his walk-in refrigerator.
Posted by Kristin @ Going Country at 5:57 PM 5 comments:

I am not a fan of nudity. For myself or my children. Although I readily admit to being a prude, the main reason I don't like my kids running around sans clothing is mostly for reasons of protection. They're boys, you know? Their tender bits are just . . . there. Exposed. It seems prudent to keep them covered to avoid a particularly unfortunately placed splinter or cut.

Poor Charlie seems to be having some difficulty with our heat lately. He's been getting heat rash on his neck and shoulders, and some yucky areas under his diaper. So yesterday, after we all went swimming in the lake, A. stripped him down and put him on the grass to air out. But of course, he doesn't stay in one spot anymore, so he started crawling around and getting covered in grass and dirt. Then I gave him a watermelon rind to chew on, which of course dripped watermelon juice all over, providing a nice sticky layer for the adherence of more dirt and nastiness.

Naked, filthy baby? Not so appealing.

I gave Charlie a very thorough bath before bed, at which point Cubby decided he wanted a bath too. So he got in the bath and commenced his very elaborate scenarios with Bulstrode the Boat and his adventures in Tubland. Or whatever he does in there. I don't really know, because he's old enough that I can leave the bathroom and just keep him in earshot while I do other things. Like the dishes. Which is what I did last night.

After awhile, I heard him get out of the bath and go into the living room. When I went to check on him, he was busily spreading his towel over the couch to make a towel bed. Right. Whatever.

He was, of course, bare of all clothing. But I was in the middle of the dishes and didn't want to go upstairs and get his clothes and battle him into them. So I left him to it and went back to my dishes. After a bit, he came into the kitchen and helped himself to the cherries that were sitting on the counter. Still naked.

Naked three-year-old in the kitchen eating cherries? Not quite as unappealing as a naked, filthy baby, I suppose. At least he was clean.

Ah, parenthood. Such a good destroyer of absolutisms.
Posted by Kristin @ Going Country at 6:35 AM 5 comments: