This morning I had to go to the hospital in the nearby larger village for a three-hour glucose test. This is a prenatal test for gestational diabetes, only required if you fail the one-hour test given at the doctor's office. And for the first time ever, I did fail it.

Way to go, little girl! Keep on differentiating yourself from your brothers! (But not this way, please.)

So I had to go into the hospital, where they took a blood sample after I fasted overnight to see what my fasting glucose level is, then gave me a gaggingly sweet orange-flavored bottle of grossness to drink, and then drew my blood once an hour for the next three hours.

Because it took almost an hour to do the registration and initial blood draw, that meant I had to sit at the hospital for four hours.

I brought a book. It was okay. I didn't pass out or throw up or anything. Not even a headache. And hey! I got to read for four hours! Practically a vacation!

So is an overnight fast and four hours at a hospital with multiple encounters with a needle a better alternative than four small boys careening around? Jury's out on that.

By the time I finally got jabbed for the last time and was free to leave, I was really, really ready to go. But just as I walked out the door of the hospital, I saw . . .

Yup. There was a guy setting up a table right outside the entrance and putting out various fruits and vegetables for sale. I guess he's there every Wednesday at 11 a.m., and I just happened to walk out right as he was setting everything out.

Good thing, because there were only six quarts of strawberries, and I bought two of them. I suspect the remaining four didn't last long.

So the first thing I got to eat after fasting for 17 hours was a fresh strawberry. Yum.

I decided after that it would probably be wise to not ingest any more sugar, even in fruit form, so I dutifully ate the nuts I had brought to break my fast and brought the rest of the strawberries home to the kids.

I wouldn't say the strawberries made the whole trip worthwhile, but it made the end of it that much sweeter.

(I don't have the results of the test yet, so just cross your fingers for me, okay? Thanks.)

Labels: all about me, baby stuff, fun with food


Thus far, having Cubby and Charlie home for summer break hasn't been as bad as I'd feared. Maybe it's because I already had Jack home with me, so it's not as if I was going from child-free days to child-filled ones, but I really think they've done a pretty good job of entertaining themselves.

I mean, sure, we've had our moments (or days . . .) of constant squabbling and unpleasantness, but generally they've managed to find things to do.

They've added on to their fort under the spruce trees, built bases for their "guys" (action figures) out of cardboard boxes, made books*, peeled potatoes, made a smugglers' cave, picked and shelled peas . . . 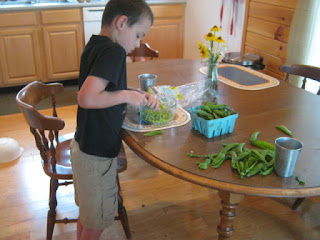 A sight to warm this shelling-averse mother's heart.

Made stew out of the empty pea pods and day lilies . . . 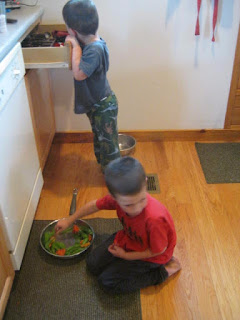 These two lowly sous chefs did most of the prep, and then Master Chef Cubby stepped in and added some sugar and water. Yum. 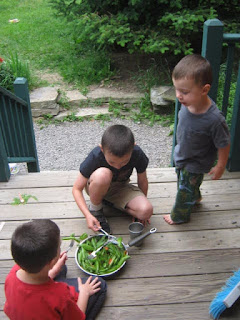 They actually ate some of it, too. Good fiber, I guess.

Despite their general self-sufficiency, they do appreciate being taken somewhere on occasion. Yesterday the whole family went fishing and then to a playground. And today, A. took them to climb a mountain.

Mountain climbing is Charlie's particular interest. He informs us he's going to climb Mt. Everest when he grows up, so he needs to start practicing. It was he who requested to climb a mountain last year, which resulted in the ridiculous 7-mile trek with three small children and a lame old dog. A. decided that he would aim a little lower this time. Today's mountain hike is only a mile long.

Mia was not invited. She can no longer climb even a minor mountain. Nor can I, in my current state of seven months pregnant and feeling it. So the two old invalid ladies stayed behind and let the robust young men tackle the tiny mountain.

Which means I am home alone. For at least four hours.

WHATEVER SHALL I DO WITH MYSELF?

Well, first I emptied the dishwasher and cleaned up the kitchen and living room, because I'm one of those people who can't be truly relaxed if there's a mess in view. Then I started laundry. Then I went out to the garden and did some harvesting. Then I dealt with the produce I had harvested (washing lettuce, cooking kohlrabi greens, etc.).

Anyone without children is probably reading this in horror and thinking, "THIS is what freedom looks like if you have children? I AM NEVER HAVING CHILDREN." But those of you with children know that anything you do without those children in attendance takes on a meditative quality when you can do it at your own pace and without interruption.

Next on my mental docket is a shower. And then I'm going to cull some toys from the overstuffed toy box, which is a task I can only do on the sly when my hoarder children aren't around to protest my throwing out that precious plastic piece of junk that came off of a juice box or something.

I also deliberately saved some coffee from this morning's pot, because I'm going to have a milkshake with my lunch. Oh yes, I am. And no one can stop me.

* Inspired by the book sale at the local library, Cubby decided they should sell their homemade books in front of the house. He spent a good long time setting up his display, making signs, putting on price tags, fashioning a money box, and so on, and then some lady actually stopped and gave them TEN DOLLARS for two of their books. Thankfully, it rained that night and ruined his business enterprise, or I'm sure he would have been hitting up every passing car to buy his creations, which I was not entirely okay with.