When I was little and we would visit my grandparents in New Orleans, we would sometimes be there when Norman's fig tree was bearing fruit. Norman was the next-door neighbor, and the fig tree was right on the property line, so there were figs all over the place. Norman didn't mind sharing. There were far too many figs for him to eat by himself, anyway.

Unfortunately, fresh figs are hard to find unless you grow your own, as my parents do now in Tucson. Also unfortunately, figs do not appreciate our climate. The MiL one time got a cold-hardy variety of fig that we kept in a pot. I think we got a dozen figs from it. Then the pot it was in broke and we planted it in a sheltered spot in the garden.

That winter was particularly brutal and the fig was not cold-hardy enough. Dead fig. Sadness.

But someone around here has had a lot more success with fig trees, because when I stopped at the very small farmers market in the village on my way back from the dump this morning, I spied figs hidden way behind some very exuberant kale. (All kale is far too exuberant, in my opinion.) Several small boxes, and two varieties.

One of the varieties was the standard brown turkey fig--the only fig I have so far had any experience with--and the other was a yellowish-green. The lady selling them didn't even know what kind it was, but she thought maybe it was the same as the kind they use to make Fig Newtons.

Did you know they use yellow figs to make Fig Newtons? Me neither. The things you can learn on a random Saturday morning.

So now I have two boxes of fresh figs. And that makes me happy.
Posted by Kristin @ Going Country at 8:06 AM 3 comments:

A few months ago, I was seeing this little book that somehow totally took over the Internet: The Life-Changing Magic of Tidying Up. Perhaps you've heard of it?

I needed to see for myself what all the excitement (dare I say obsession?) was about, so I checked it out at the library and read it.

And then I called bullshit.

Not on the premise that people need to get rid of stuff. Most people do. Including me. But I called bullshit on it because it is not applicable to everyone. Not even close.

If you want to live in a sterile apartment and do nothing but go to work and, I don't know, stare at your TV when you're home, get on that tidying up method. If you live alone, or with one other rational adult? It's probably perfect for you. Even if you live in a nice, modern suburban home and have a nice, modern suburban life (as I used to), it would probably work really well. And has for a lot of people.

But if you live in the country with three insane boy-children, two other adults with varying interests--one of whom is an enormous man with enormous clothing--in a climate that requires multiple wardrobes and equipment for the change of seasons, plus dogs, ducks, and a cat . . . well, I'm afraid Marie Kondo would not know what the hell to make of Blackrock.

We need tools. We need snowshoes and utility sleds and snow shovels. We need building materials. We need lots of changes of outdoor apparel for the children (and ourselves). We need a lot of STUFF.

Yes. Need. That's what I said, and that's what I mean. To live the life we choose to live, we need things. More things than will fit in an apartment in Tokyo, for damn sure.

I am the opposite of a hoarder. That happens when you grow up in a military family and move every three years. Packing boxes so frequently makes you very conscious of what is worth shipping three thousand miles. Throwing things out brings me great peace, and I do it with some frequency, but Marie Kondo's tidying just doesn't work here.

Though I think it would be pretty amusing to have the lady herself show up and try to apply her principals to Blackrock.

Labels: all about me, confessions, country livin', country wisdom, domesticity

So many photos the world has been deprived of. Allow me to remedy that. 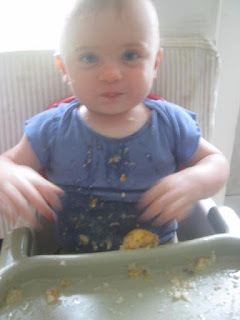 That time I gave Jack a whole pear to eat/mutilate while I was making dinner. And then he had a bath. 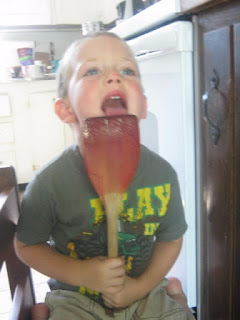 That time Charlie and I made grape jelly while Cubby was at his first day of school. It seemed like a fitting activity: school+PBJ, right? Plus, then Charlie had a nice, sticky spoon to lick. 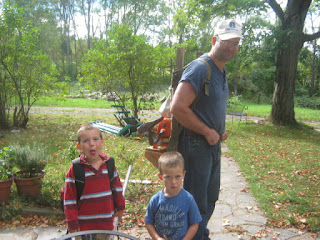 That time A. packed a thousand pounds (approximately) of tools two miles into the gully so he could build a winter camping lean-to with Cubby and Charlie. Of course, now he has to take them winter camping. Have fun with that, A. 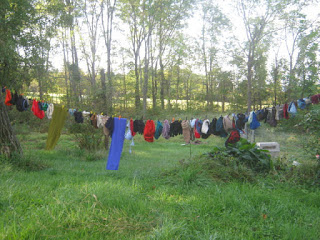 That time I washed all the hats, mittens, gloves, scarves, and other winter apparel that's been moldering in a drawer in the dining room highboy all summer so we'll be all ready when the cold weather comes.