If you need me from now on, you can find me in the Big Rock Candy Mountains*.

* That link is to the original song, which was a song from the 1920's about a hobo's dreamland. The version I'm familiar with, from a CD of kids' songs the MiL bought, has slightly different lyrics that I like better. Because in the children's version, candy grows on bushes and love is all around you. Nice.
Posted by Kristin @ Going Country at 5:57 AM 5 comments:

Labels: all about me, baby stuff, randomness

That sounds gross, doesn't it? It's not--promise.

See, last summer, the Summer of the Pickle, I tried a recipe for freezer pickles from my Serving Up the Harvest cookbook. The recipe calls for just submerging cucumber and onion slices in a bread-and-butter pickle brine and freezing it. It was such a weird idea that I had to try it. I used less sugar than the recipe called for, because it seemed awfully sweet, stuck a quart of it in the chest freezer, and promptly forgot about it. Because that's what happens to things I stick in our big chest freezer.

Everything eventually resurfaces, however, and I dug out the experimental freezer pickles a couple of months ago. After a few minutes of puzzled contemplation, I remembered what was in that particular container (of COURSE I didn't label it--that would be too intelligent) and left it out to thaw with some curiosity about the result of freezing cucumbers.

The verdict? Eh. Not great. Not terrible. The texture was, predictably, kind of limp. The taste was pretty good, though, and it occurred to me that it tasted a lot like hot dog relish. Which I don't generally eat. But I left the container of pickles in the refrigerator anyway, mostly because I couldn't just throw them out, but also with some vague idea of using them for relish when hot dog season arrived. I figured A. would probably eat the relish at least.

Hot dog season has arrived and the pickles are already almost gone. Turns out, I like my own relish on hot dogs quite a bit. Mostly because it covers up the hot dog, which is not really my favorite food. So I just pull out the pickles, chop 'em up fine, and dump a bunch on the hot dog. It tastes good, adds some vegetables to what is essentially a nutrient-free meal, and allows me to call freezer pickles a successful experiment.

Wins all around.
Posted by Kristin @ Going Country at 6:02 AM 8 comments:

Hey, remember yesterday? Which was the fifth of May, also known as Cinco de Mayo for those of us from states with huge Mexican populations*? Yeah. It was. And it totally snuck up on me this year. Meaning I didn't remember it was coming up when I was at the store last week (by myself! while A. baby-wrangled! it was very exciting). And so there was no guacamole. BOO. And no Corona. DOUBLE BOO.

I did manage a semi-festive meal from ingredients on hand, however. I made refried beans and mushroom taco filling. Let me tell you about them. Because the meaningless minutia of my life is what keeps you coming back day after day.

I make refried beans the way I saw Rick Bayless make them on his PBS cooking show many, many moons ago. I saw the show once and have been making refried beans this way ever since. And that way is: heat vegetable oil in a non-stick skillet--or a cast iron skillet that belonged to your husband's grandmother and is so old and well-seasoned that it's as non-stick as not-non-stick gets--add minced garlic, pour in a big can of black beans (including the sludge--YUM!), mash with back of spoon or potato masher, and cook down until desired thickness. Done!

And if you think using canned beans is cheating, then go ahead and go through the pain in the ass of making dried beans and add salt. Personally, I'd rather be a cheater.

The mushroom taco filling is a recipe from Mark Bittman that was in The New York Times a couple of years ago. You can go here to see it. It's got very few ingredients, but is really surprisingly good. Even A., who normally looks highly askance at anything trying to substitute for meat in a burrito, likes this. And I like it because it specifically calls for the humble white button mushroom. No fancy shiitake or oyster mushrooms here. Rock on.

So that was it. Our big Mexican feast. It wasn't the same without the guacamole and the Corona, but I do what I can.

* In case you haven't read every post I've ever written and remembered every detail of my life I've shared so far (AND WHY NOT?), I'm from Arizona.
Posted by Kristin @ Going Country at 6:55 AM 11 comments:

It's That Time Again

Lilac time, that is. Sometime I might actually take the time to try to photograph every lilac bush on our property. There are a LOT, and the pictures I take of one or two don't really convey how the lilacs seem to be around every corner this time of year. And the scent is pervasive everywhere I go.

But I haven't done that yet, so you'll just have to take these photos and multiply them by about ten in your head. 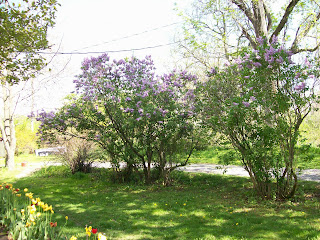 You DO remember how to multiply, don't you? 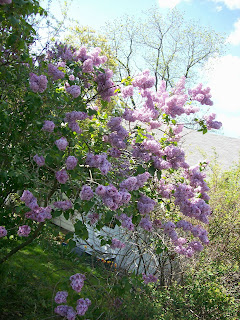 If you're having trouble with the multiplying, don't worry--so do I.
Posted by Kristin @ Going Country at 6:56 AM 9 comments:

What a tease I am, making a passing mention of A. building a boat out of plywood and then not posting pictures. Which many of you requested and I never did. Mean. But it's all good, because since I mentioned that boat, A. built another one. A better one, one that he was happier to allow me to photograph because it wasn't sealed with roofing tar. Like the last one.

Oh yes, it was. You think I was joking about woodchuck ingenuity?

No, this is a fancy boat. It's sealed with . . . um, some kind of caulk. I'm hazy on the details. But I DO know that only the bottom of it is plywood and the rest is the milled pine, which A. curved into shape with his Come Along (there's that ingenuity again). He even painted it a jaunty white.

The boat's maiden voyage was on Sunday, which is when A.'s friend Jodi (remember him from the milling adventure?) came by to help A. haul it out of the old milk barn where it was built and down to the lake shore. Jodi even had a camera to take photos of the maiden voyage. Good thing, because I, of course, did not. Have a camera, I mean. Since I usually don't.

How about I just post the damn photo already? Yes? Okay. 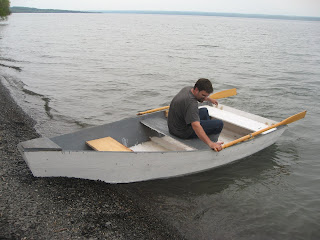 It looks like a boat, right? I mean, it IS a boat, so it SHOULD look like one, but I'm always surprised by its obvious boatiness because A. basically taught himself to build a boat without plans or anything. He pretty much got some wood and started hammering. This is his third one, and they get more and more boat-like with every attempt. It's pretty impressive.

I had my first outing in the boat last night. A very short outing, because Cubby stayed on the beach with the MiL and screamed the whole time, so we went back to shore pretty quickly. Maybe he wanted to be out on the boat, too. And he will, once the water isn't cold enough to freeze an infant on contact should we all capsize or something.

No title because I really just can't think of anything clever and interesting right now. And why not, you ask? Well, let me tell you a little something about that Cubby boy of mine. He's been a relatively good sleeper since he was about three weeks old, letting me sleep about a five-hour stretch in the beginning of the night, and then another few hours after a feeding and change. And the REASON he's been a good sleeper is because that child has been swaddled into an immovable bundle every night of his life.

It appears his last growth spurt a few days ago gave him just enough more size and strength to allow him to bust out of his swaddler like the Incredible Hulk. Which he has done every night for the past few nights. Without the swaddler, he sleeps maybe three hours. If I'm lucky. I'll leave you to imagine how that makes ME feel in the morning at about 4:30 when he wakes up for the day.

And that's why there's no title.
Posted by Kristin @ Going Country at 6:22 AM 10 comments:

The Potatoes Are In

I feel a great sense of calm and contentment now. And yes, I realize that is probably not the usual reaction to a bunch of tubers in the dirt. So I'm weird.