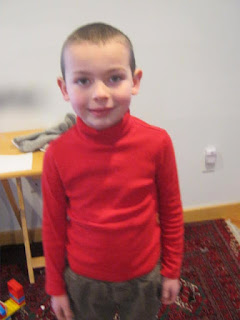 Happy birthday to
the amazing Cubby.

A Comedy of Baking Errors


My mission this morning was to bake, assemble, and decorate 24 cupcakes and an ice cream cake. The cupcakes are for Cubby's birthday celebration at school tomorrow. The ice cream cake was his request for his actual birthday on Saturday.

Okay. I can do this. I may be The World's Worst Baker (title confirmation pending), but I will focus and follow a recipe and make cake. Lots of cake.

I quadrupled Grandma Bishop's Chocolate Cake recipe (found in the comments of this post), which did require a lot of concentration so I could make sure that I actually quadrupled every single ingredient and didn't, say, only double the amount of eggs or something.

I didn't do that. But I did realize I didn't have enough sugar, so half the sugar was light brown sugar. And I didn't have any buttermilk, so I used yogurt and regular milk. And I used butter instead of lard (sorry, Grandma Bishop). And I forgot to add the flour.

No, seriously. I forgot to add the flour. Do I get my title now?

Luckily, I realized this in time to actually add the flour, not, like, when I was baking them or something.

A quadruple recipe made 24 large cupcakes, plus two thin layers for the ice cream cake. The frosting was just butter, powdered sugar, and milk.

I decorated the cupcakes with M&Ms. The reason I decorated them with M&Ms was that when I took Jack to the store with me early this morning specifically to get colored sugar and that gel stuff to write on cakes (what is that called?), the store was closed.

So I stopped at the gas station instead and got some M&Ms. The kids will probably like those better, anyway.

Also, I made sure to put exactly six M&Ms on each cupcake. You know why I did that? Because I have three children, that's why, and I know damn well that at least some of the kids in that class are going to be counting M&Ms to make sure they get as many as everyone else. Because that's what my children do.

Also also, I actually shifted the colors of the M&Ms around so as to have a pleasing variety of colors on each cupcake. Because who wants the cupcake with only brown and orange M&Ms? No one, that's who.

I haven't yet actually decorated the ice cream cake, but we do indeed have cake. Lots and lots of cake. 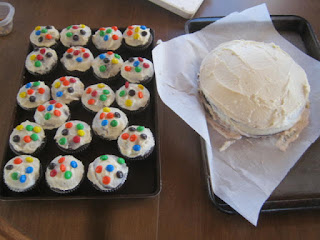 Labels: all about me, confessions, Cubby, fun with food, school 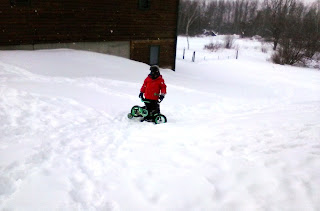 In which Charlie learns that bikes are useless in a foot of snow. 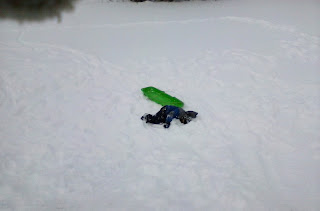 Cubby gets a harsh physics lesson on gravity and momentum courtesy of the sled and a steep incline. 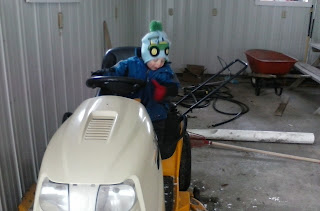 And Jack avoids the whole scene by escaping to the barn to sit on the riding mower.

Sorry, kids. Better get used to it. We won't be seeing bare ground for months yet.

Posted by Kristin @ Going Country at 9:23 AM No comments:

My Life in Three Words


Yesterday when I was sitting on the couch looking at the laptop computer, Charlie came to sit by me and announced disparagingly, "There are about 150 things that are more important than staring at a computer."

"You're right," I said, shutting the computer and pulling him into my lap. "And you know what the names of three of them are? Charlie, Cubby, and Jack."

Truer words have never been spoken. And what a sweet life it is.
Posted by Kristin @ Going Country at 5:43 AM 2 comments: