Friday Food: Yes, Even on Christmas

Wouldn't want to break my (stupidly) long streak of Friday Food posts, would I now? Of course not. Plus, I actually write it throughout the week and finish it Thursday night for a scheduled post in the morning, so it's not as if I got up at four on Christmas morning to write this ridiculously long post.

Just a little behind the scenes tidbit for you.

Long version: Jack's birthday request. I made the stir-fry with the rest of the pork I had made the day before, plus a bag of frozen stir-fry vegetables (hoarded for this very day), some extra frozen green beans, onions, and carrots.

Jack also requested the chocolate pudding. I only had enough chocolate chips to make one recipe of it. I usually double that recipe, but we also had brownies on hand left from the class Christmas parties the day before, as well as more of A.'s birthday pumpkin custard, so I figured we wouldn't have any lack of desserts.

Sadly, this means no ugly cake photos. I know you're disappointed.

Long version: The pheasant was wild; the rabbit was tame.

A. shot the pheasant when he went hunting with Cubby the weekend before. A. hung it to age a bit, and it was so cold, it actually partially froze. So it hung for five days. The rabbit was one of the bucks from the casita. This is the first time I've ever prepared a domestic meat rabbit--as compared to a wild cottontail--and it was really quite a bit bigger. Milder in flavor, too.

Both of these are very lean meats, so I covered them all over with bacon before roasting them, removing the bacon after about twenty minutes and seasoning the meat with salt, pepper, and thyme. I made a little sauce with the pan juices, a bit of some fancy apple brandy from Santa Fe my sister sent us for Christmas, and cold butter.

They came out fine, although somewhat tough. A. was very enthused about the pheasant. He stood over the pan after dinner, picking meat off the carcass, and very solemnly told me, "I regret to inform you that I am passionately pleased by wild pheasant."

Regretful indeed, given that this is only the second time in our entire lives that he's shot a pheasant.

His success and enjoyment of the pheasant inspired him to go quail hunting on this day, though, on some public land just a few miles from our house. We all went along for the adventure. 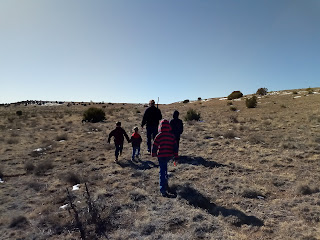 Daddy and the gun in the lead, of course.
Poppy eventually dropped well behind the others, so she and I pulled up a patch of buffalo grass and chilled out for awhile. 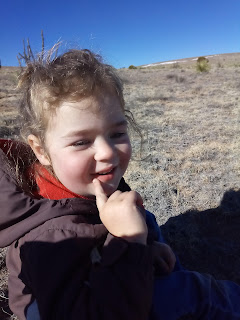 Only smiling because I directed her away from the cholla cactus pieces she was about to sit on.
It was pretty quiet out there. 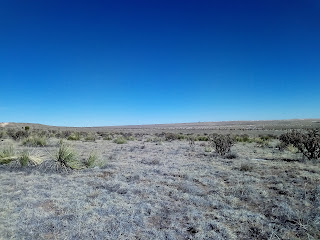 Far from the madding crowd, you might say.
A. didn't get any quail, though.

Long version: There was quite a bit of meat left on the carcasses of the rabbit and pheasant, and the easiest way to get it off is to boil the carcasses for awhile. This has the happy result of also making very nice stock.

I used the stock to make soup with the meat I pulled off the bones, a couple of pieces of bacon, onion, garlic, celery, carrots, green beans, and rice. It was very good.

We finished up the caramel sauce with this Sunday dessert. There was just enough for A. and me to have it with our ice cream. The children chose maple syrup when given a choice, so it all worked out.

The fruit mix was one of three GIANT cans I was given by the cook at the school when she was clearing out the kitchen before Thanksgiving. Each can is 6.8 pounds of peaches, pears, and grapes in an extra-light syrup. It was kind of bland, so I added a bit of maple syrup and cinnamon to it for the children. Only Jack and Poppy finished theirs, though.

I froze the rest of the can (in bags, not in the can) for use in smoothies this summer. Given that I have two more of those huge cans, I guess we're going to be all set when it gets hot.

Long version: This was the last of the smaller pork roasts my mom brought us in October. I just roasted it with salt, pepper, garlic powder, and thyme until it was done. Under the roast was a jar of my rinsed sauerkraut and the remainder of an onion that I sliced up because it was starting to go bad.

Welcome to My Very Real Kitchen.

The carrot sticks were courtesy of Miss Amelia and her commodities delivery. She couldn't eat it all, so she asked A. to come and pick up the extra food. That included the biggest carrot I may have ever seen. 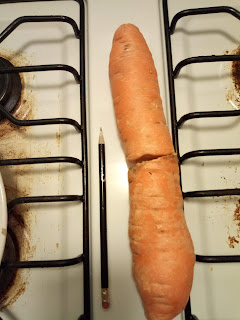 Pencil for scale. If you can even see it in the shadow of that enormous carrot.
The commodities vegetables are often the ones that are too large to sell commercially. This makes them highly entertaining. If you're easily entertained like I am, that is.
Wednesday
Short version: Pizza, green salad with ranch dressing
Long version: I was baking yet another batch of bread for neighbor gifts, so I used some of the dough to make pizza with some of Finny's sauce from the freezer. One was just cheese, and on the other I put the rest of the leftover breakfast sausage, chopped up.
Also this day, please rejoice with me that I successfully canned all of the bull meat I set out to pressure can. I used the tips Karen. gave me in the comments of this post, and all of my jars sealed. Hooray! Thanks, Karen.
I had casually mentioned the day before that I was planning to can meat the next day, and A. was all, "Well, no point in waiting on your Christmas present, then," and brought out these: 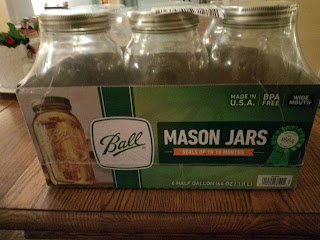 A. might be the Woodchuck Man, but I think it's clear that I am the Woodchuck Woman, because I was actually really pleased to receive these.
I don't know if you can see the size on the side of the box, but those are half gallon jars. I've always wanted half gallon jars, and now I have six of them. I used four--which is the maximum number that will fit in my pressure canner--to can the bull meat, so now I have two gallons of canned meat.
Merry Christmas to me.
Thursday
Short version: Bull and potato skillet, cucumber spears with ranch dressing
Long version: And then I used some of the bull meat. Not the meat in the half gallon jars, though. For this I used one of the quart jars that actually did seal the first time I pressure canned bull meat.
I must admit that I was very burned out on the kitchen by this point and not at all excited about cooking dinner. Especially because we went to church in the afternoon and didn't get home until 5 p.m. I had already boiled some potato chunks, so I just fried the meat from the jar with salt, pepper, paprika, and garlic powder, then dumped in the potato chunks and called it good.
It was pretty good, actually. That pressure canned meat sure is convenient.
Okay, your turn! What'd you eat this week? Or, what are you eating today for your holiday celebration?
Posted by Kristin @ Going Country at 4:45 AM 6 comments:

Actually, I think my particular children probably have visions of the mail lady's bizcochitos dancing in their heads.

Regardless of the confection giving them sweet dreams, however, they are indeed nestled all snug in their beds. And this awaits them in the morning: 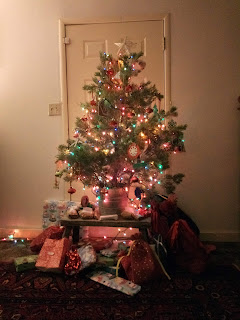 Christmas Eve vibes, New Mexico style.
Merry Christmas Eve, from all of us to all of you.
Posted by Kristin @ Going Country at 9:10 PM 1 comment:

I cook with a lot of garlic. Like, a LOT of garlic. This, of course, has everything to do with El Rey de Ajo and his (possibly excessive) garlic plantings.

Not that A. would ever think any quantity of garlic is excessive. 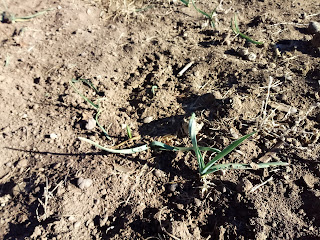 What next year's garlic crop currently looks like. Well, what like five plants look like. There are PLENTY more than this in the ground. Of course.

Luckily, everyone in this house likes garlic.

I do a lot of chopping and pressing of garlic cloves, of course. However, with the quantity of garlic that we have on hand, I'm really dealing with many heads of garlic, rather than just individual cloves.

This is where roasting comes in.

I roast whole heads of garlic somewhat frequently, especially when I'm making Finny's sauce. That sauce involves an entire head of garlic roasted with the tomatoes, right on the same pan. The original recipe calls for cutting off the top of the head of garlic, and then wrapping the whole thing in aluminum foil for roasting. When the garlic is roasted, you then squeeze the garlic out of the skins.

This is how I always did it, because Finny told me to. And it works well.

The only issue I had--and this is really just me and my own issue, I suspect--is the aluminum foil. I dislike having to use anything only once, even if it's just a small piece of aluminum foil. Because after I bake the garlic, I have to just throw that aluminum foil away. Horrors.

I told you it was just my issue.

And then, one time this summer when I had run out of aluminum foil and really needed to roast some tomatoes to get them out of the kitchen, I decided to try doing it without the foil. Because I wasn't wrapping them in anything, I decided not to cut the tops off, figuring the intact skin would act as the wrapper.

It does. And this method works.

The cloves are somewhat drier and firmer when roasted this way, so they don't squish out of the skins like they do when the garlic is wrapped up in foil. Instead, the skin just pulls away and the cloves come out intact, which is much less messy.

Maybe this method wouldn't be the best if you want a paste for smearing on bread or something, but for dropping in a food processor to make tomato sauce, it doesn't matter. Or for eating them whole, which we definitely do.

So there you go: Roasted garlic without throwing away aluminum foil. Just doing our little part to save the Earth. And not buy more aluminum foil. 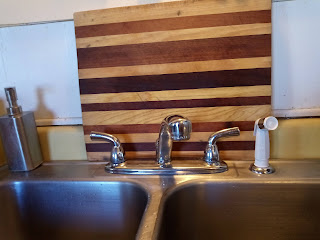 I have a new faucet! It isn't broken! It moves freely! It doesn't leak! Hooray for A.! 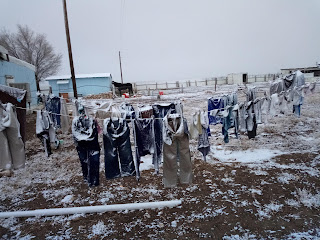 Yeah. So much for line drying. These clothes had to dry inside, hung all over beds and chairs. As did the other small loads I did for the next week, when it rained, and snowed, and blanketed us in fog, and otherwise provided weather not at all conducive to line drying. (No, Mom, I still don't want a dryer.) 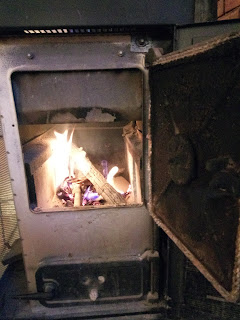 It is definitely woodstove season. Closed woodstoves are more efficient heaters, but I must admit I really enjoy watching the flames when I have the door open to start the stove in the morning. 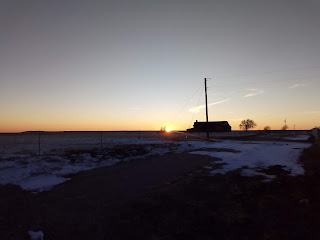 Sunset behind the old schoolhouse down the road. 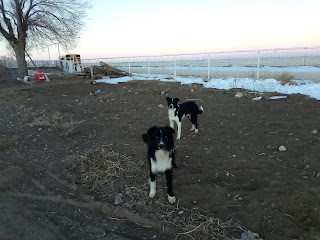 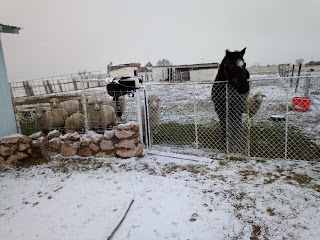 Snow, sheep, and Samson at sunrise. (Unintentional but very pleasing alliteration.)
Posted by Kristin @ Going Country at 4:30 AM 5 comments: