The Big News (But Not a Baby)


Just thought I'd clear that little issue up right off the bat so I can go ahead and make an announcement:

I know. It's shocking. Should I say it again, just so you can take it in?

Starting August 1, we will no longer be The Family Blackrock, we'll be . . . Well, a family that lives really, really far to the north. Possibly The Family Frozen? Whatever.

We're moving to very far northern New York State. And when I say "very far," I mean our house is literally three miles from the Canadian border. Yes, it will be colder than here. As A. said when we were talking about it, "Let's not fool ourselves--it's cold as hell up there."

On the upside, the house we're renting was built in 2003, so it's actually insulated and presumably will not have ice on the bedroom walls. Also, it has a dishwasher.

I KNOW. A dishwasher! This might be the most exciting part for me.

The most exciting part for A. and Cubby is the fact that the house is on a 300-acre Christmas tree farm, and A. has permission from the landlady to hunt that land. Walk-out northern hunting? A dream come true.

Also, she has a vegetable garden, dozens of berry bushes, and lots of apple trees that she says are ours to harvest. Sweet.

The reasons for the move are many, but I think it's going to be an exciting adventure for all of us. Stay tuned for the stories.

And one more time, just so it can properly sink it: We're moving. Yup.

Labels: all about me, confessions, family, the A team

The Domination of the Bullhead 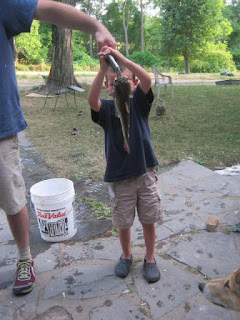 Nothing fosters self-esteem like landing a big, ugly, bulbous-headed bullhead from the dock. Good work, Cubby. Time for another fish fry.

Celebrating the Day After with Vomit

A. is laid out on the davenport in the parlor, rendered out of commission by some kind of virus. Likely the same one that resulted in a vomit-covered Jack two days ago.

Cubby is huddled up on a mattress on the floor in the parlor*, vomit bowl at the ready. He already used it once this morning. Let's hope he doesn't need it again.

Charlie and Jack are so far okay, as am I. We all had it earlier, so I'm hoping none of us have a relapse. There's only so much virus-related fun I can take.

Happy Fifth of July! Vomit is much less festive than fireworks.

* I left it there after my niece left, because the kids enjoy bouncing around on it so much and it's kind of handy to have an indoor trampoline on hot days.
Posted by Kristin @ Going Country at 9:17 AM 3 comments:

Labels: all about me, Cubby, family, Jack, randomness, the A team

A. has been planning for a couple of weeks now to have a carp derby on Independence Day. Because catching enormously obese trash fish is what made this country great. Just yesterday he announced to Cubby and Charlie that not only were they going to spend the holiday carp fishing with Daddy, but that he would set up a tent on the beach and they could camp out on the beach the night before.

Based on the excitement this generated, you would have thought he had announced we were going to Disneyland. Except our kids have no idea what Disneyland is, so I guess a tent on the beach is way more exciting to them.

Camping on the beach obviously meant dinner on the beach, so I started planning transportable foods for a beach picnic. At 3:30 p.m., Jack woke up from his afternoon nap and I went in to get him for the beach party only to find him and his crib absolutely covered in vomit.

Luckily, children have a freakish ability to bounce back almost instantly from a vomit episode, so after a very thorough bath (vomit in the ears, vomit in the nose--OH MY GOD, KIDS ARE SO GROSS) and a short session watching cars on the road from the front porch rocking chair, he was recovered and ready to hit the beach.

A. set up one fishing rod on the beach for carp, though he told me they never bite when it's wavy and there's a  lot of boat traffic, both of which were the case this afternoon. We spent a couple of hours eating cucumbers and tortilla chips and pork chops on the beach, and then Jack's earlier illness caught up with him, leaving him quite clearly ready for bed.

A. had just said he was going to set up the tent when we all heard the fishing rod start to spool out and A. went bounding over to the water to haul in an enormous carp. Cubby netted it as it came up to the shore, and then A. decided that since I was going up to the house anyway, he would gut it and I could bring the fish up to put in the refrigerator. He has big plans for a fish fry tomorrow, you see.

Jack was not pleased with the sight of this huge fish flipping around on the beach and let me know he really, really wanted to go to bed now. I managed to placate him until the fish was gutted and the tail and head were cut off. Otherwise, it wouldn't have fit very easily in the refrigerator.

Then A. put the carp in a plastic bag and I trudged the 300 yards uphill to the house with a 26.5-pound baby on one arm and a ten-pound headless carp on the other, blessing America the whole way.

Happy Independence Day, my lovelies. I hope you get to celebrate in whatever way makes you happy. It can't be anymore woodchuck than this.