Proof That Dreams Do Come True

As of this morning, the ice holds A.'s weight. 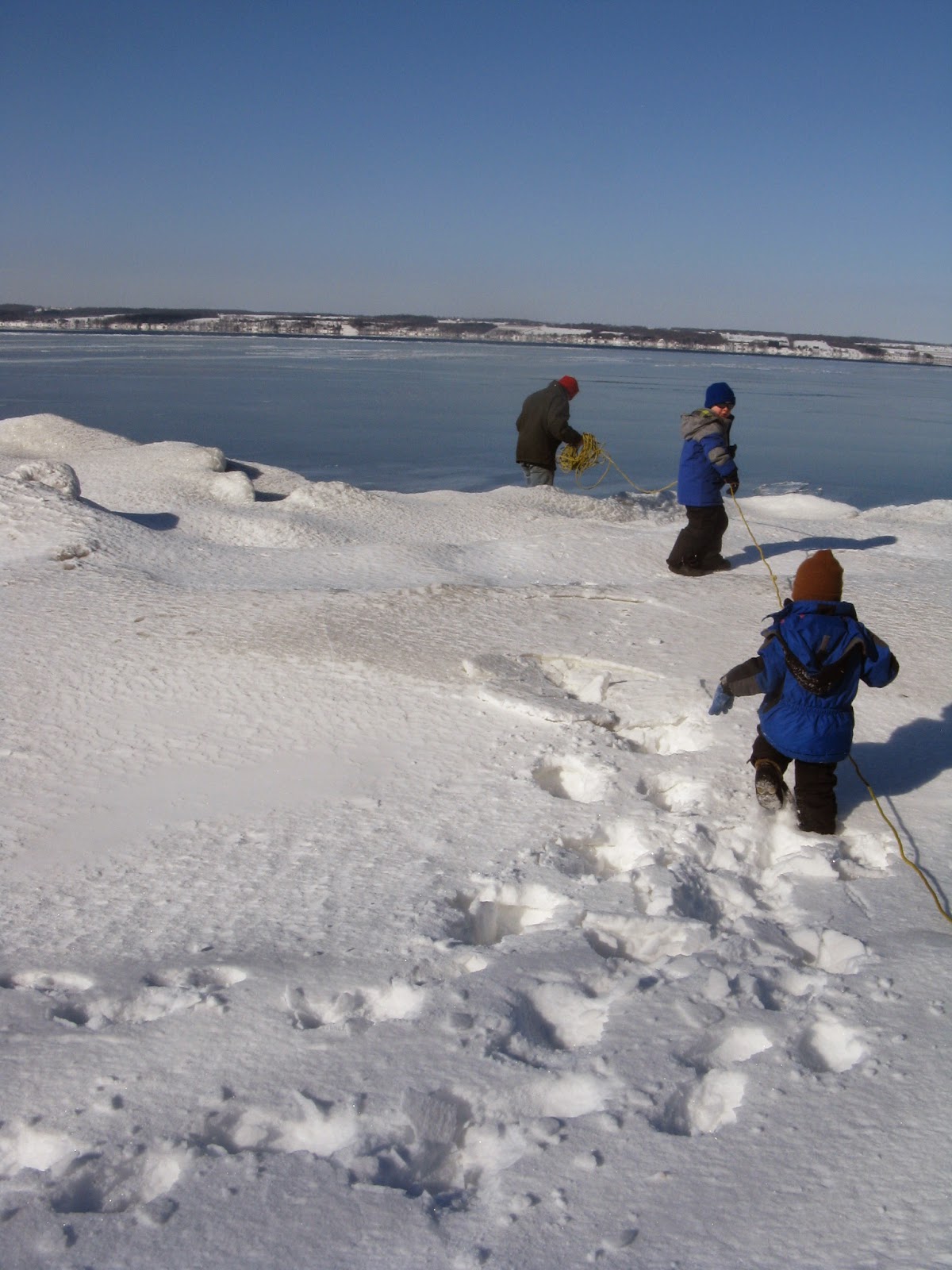 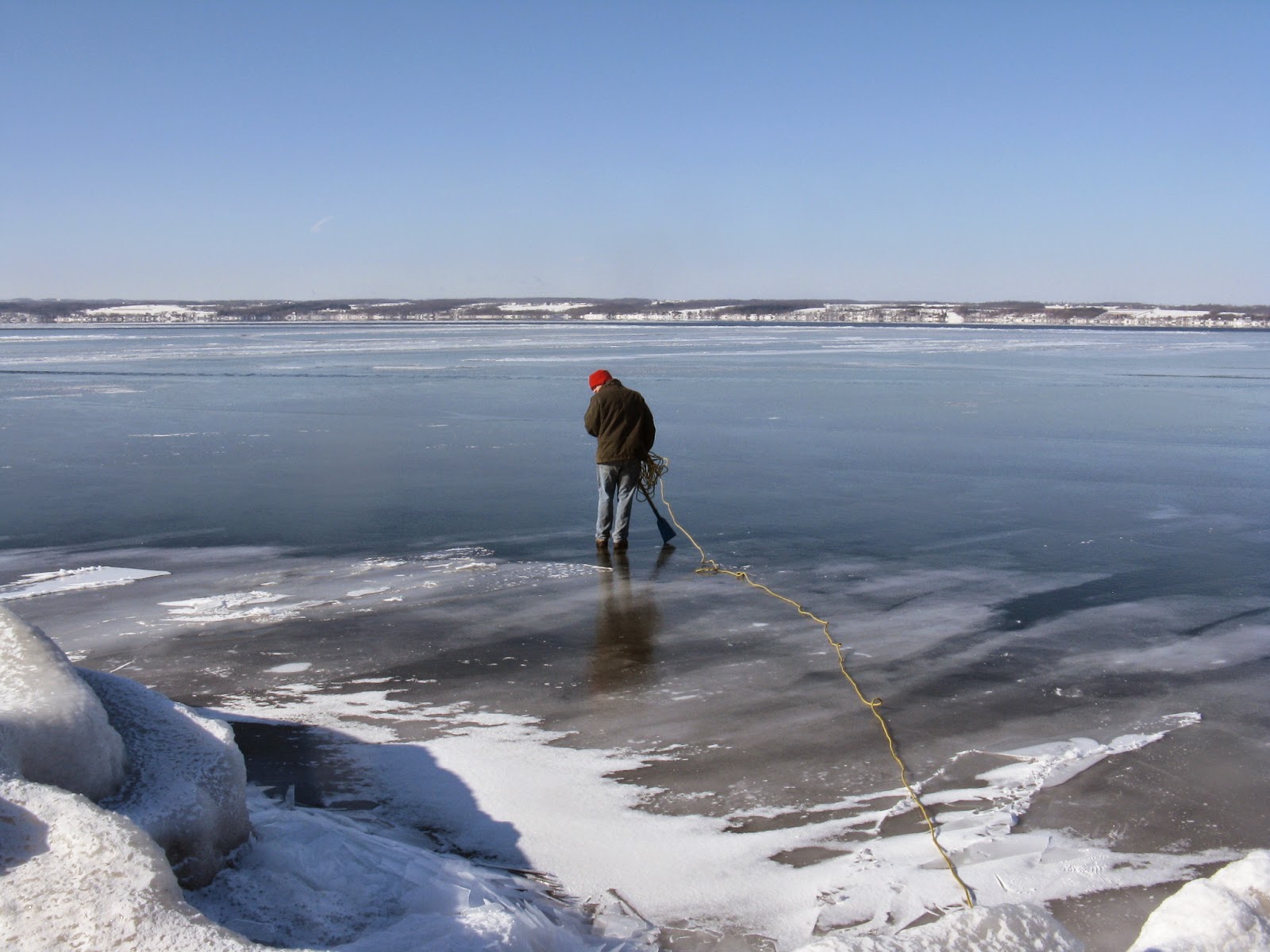 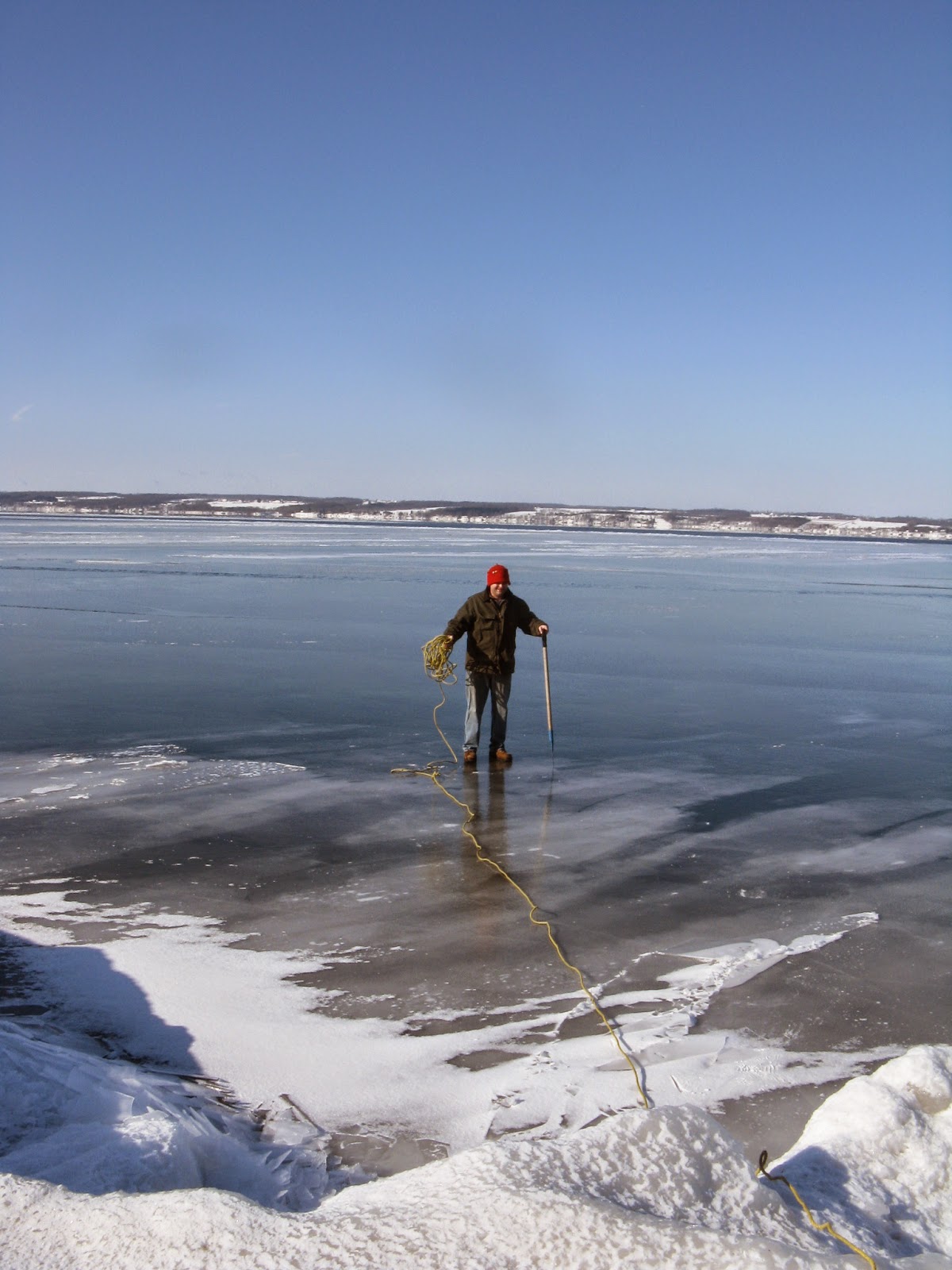 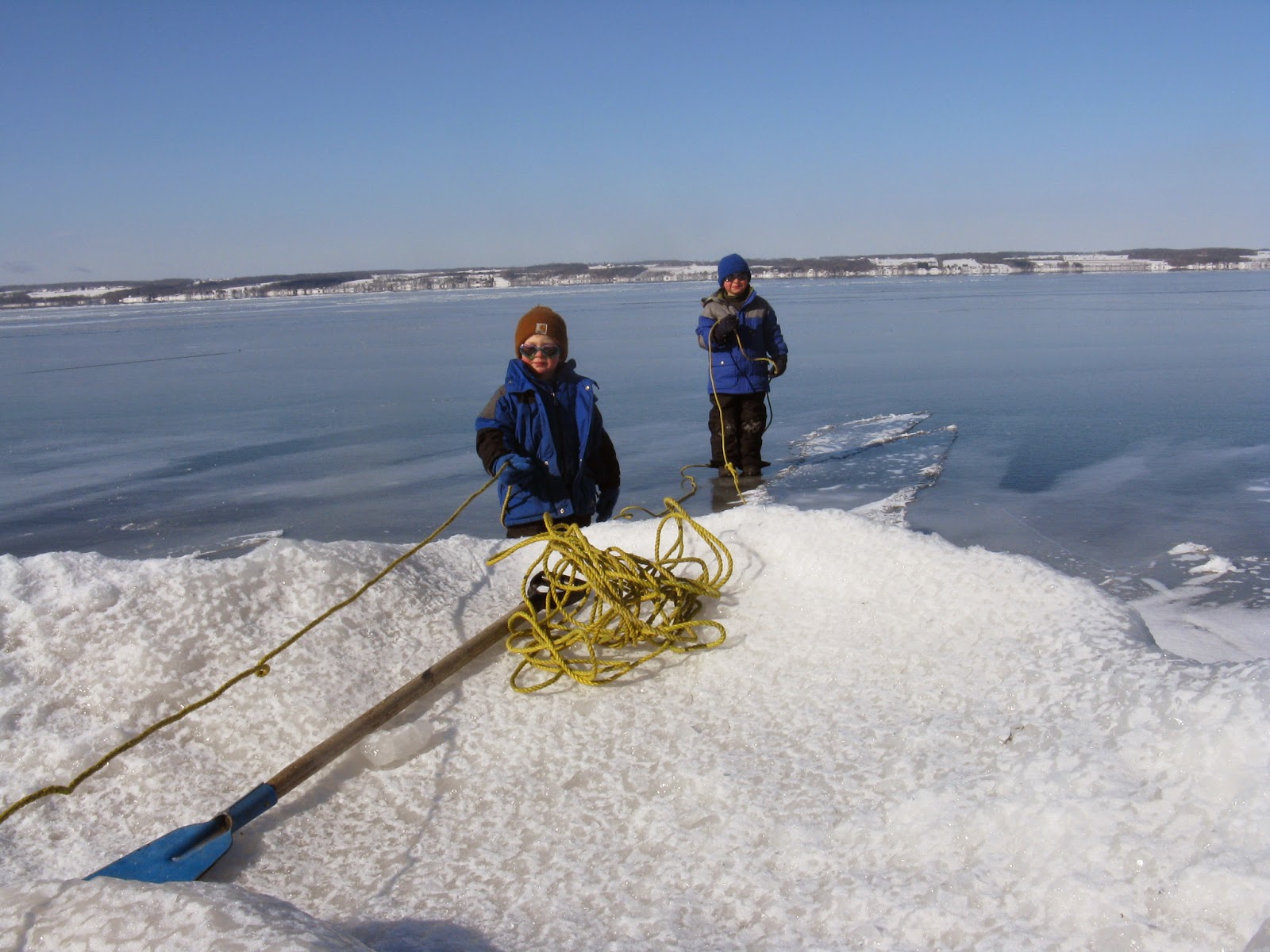 The Lake Froze, and We Were There

This morning at 6:20, while lying in bed trying to summon the energy to get up (I have a cold and I think Jack is getting it too, so he was up a few times last night), I heard A. announcing to the older children downstairs that the lake was frozen.

Can I convey his excitement at this fact? No, no I cannot. He was so excited, he actually dressed the children--a most hated chore that he will usually avoid at all costs--so that they could go down to the lakeshore with him to see the ice.

I got up to help him get their outside clothing on--an even worse chore than the regular clothes dressing--and then, of course, I had to go down myself to see. And also of course, I had to bring Jack with me. If history is being made, the whole family should be present, right? Right. Ten degrees and wind be damned.

Plus, the snow on the side of the road leading to the lakeshore was almost knee-deep thanks to the plows. A. hauled the older two kids in the utility sled so they didn't have to struggle through it, but I had to make my own way. In knee-deep snow. With a baby strapped to my front. With a cold. First thing in the morning before coffee or breakfast.

Are you appropriately impressed with my bravery yet? Thank you. So was I.

A. whipped out the camera to take a few very fast pictures of history made and . . . "no memory card" says the camera. Because the memory card was still in the computer. Which means no photos can be taken.

A. nearly had an aneurysm, I think, but I insisted he go back to the house to get the memory card while I waited on the lakeshore with the children. The REALLY COLD lakeshore. And the children were also getting really cold.

They were brave, though, while A. raced back up to the house, only stating for the record they were freezing and wanted to go back home. They didn't cry or anything, they just announced this in a matter-of-fact tone. I know, kids. I know. Me too.

But this was important to A., so we stood down there for the three minutes it took him to get up the house and back down again. I distracted the children by talking about the cavemen and how it was like this for them and they didn't have nice warm houses to go back to and do you think seagulls get cold and blahblahblahblah HURRY UP, A.

He did hurry up. And he got his photos. 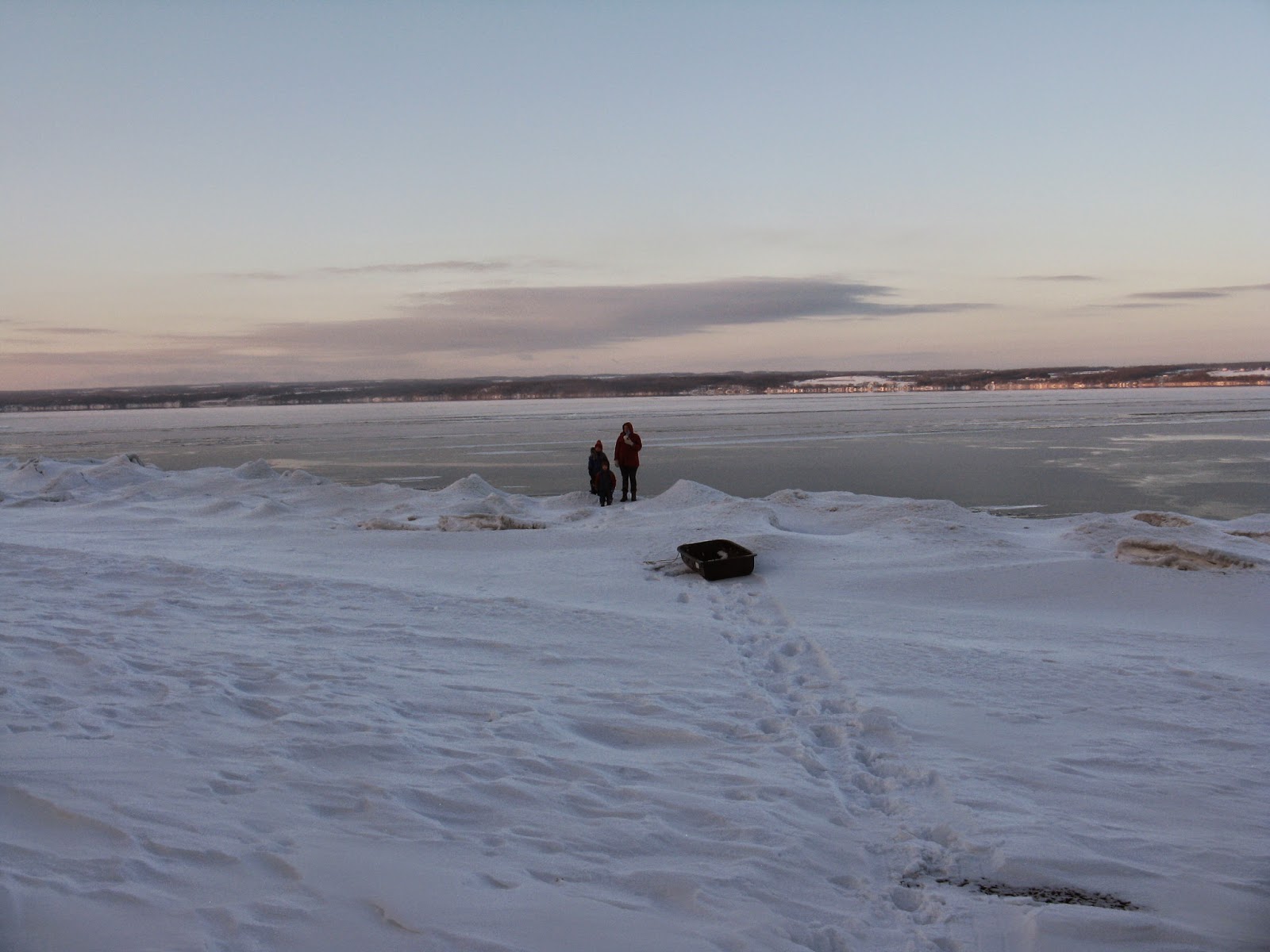 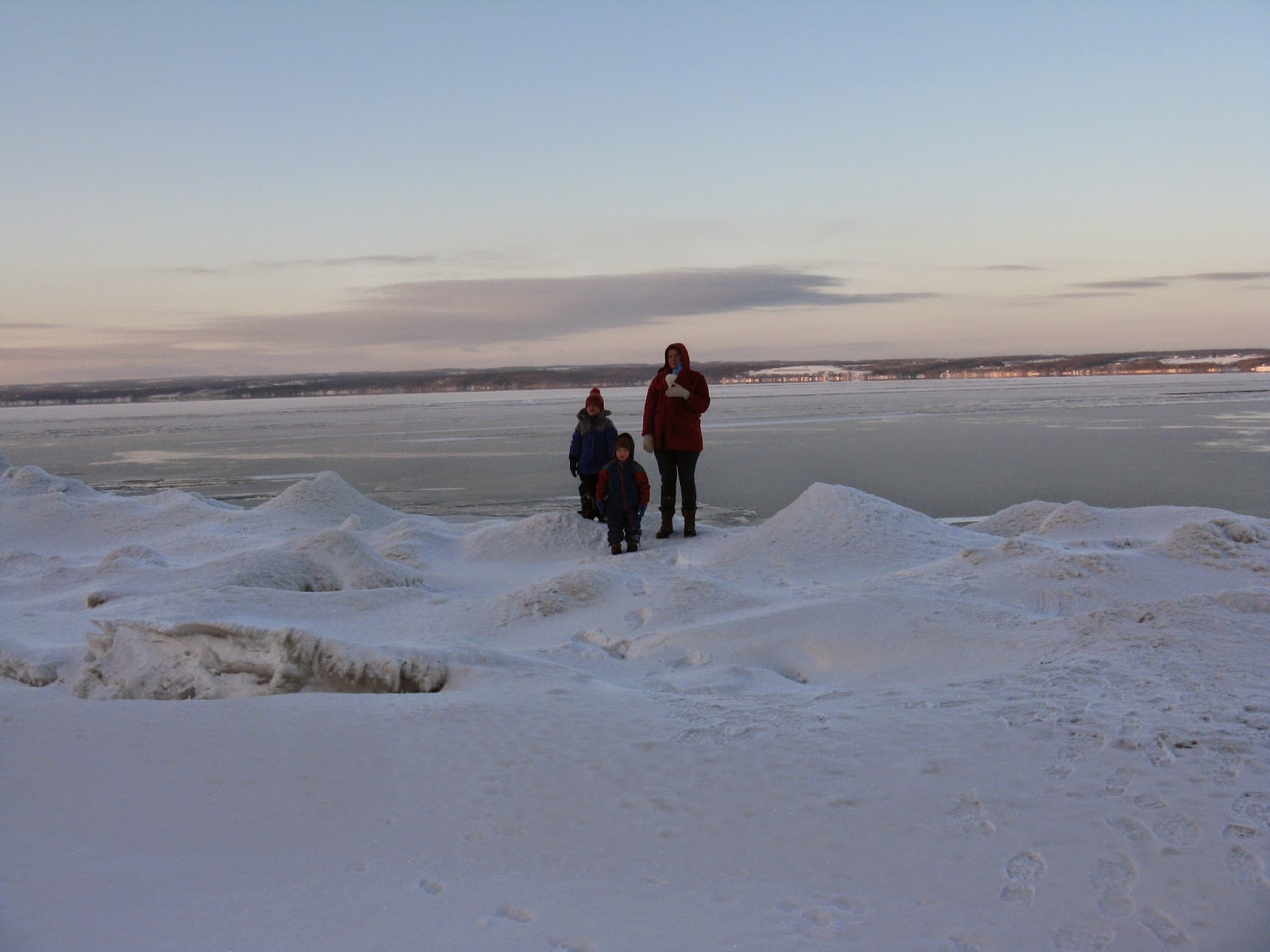 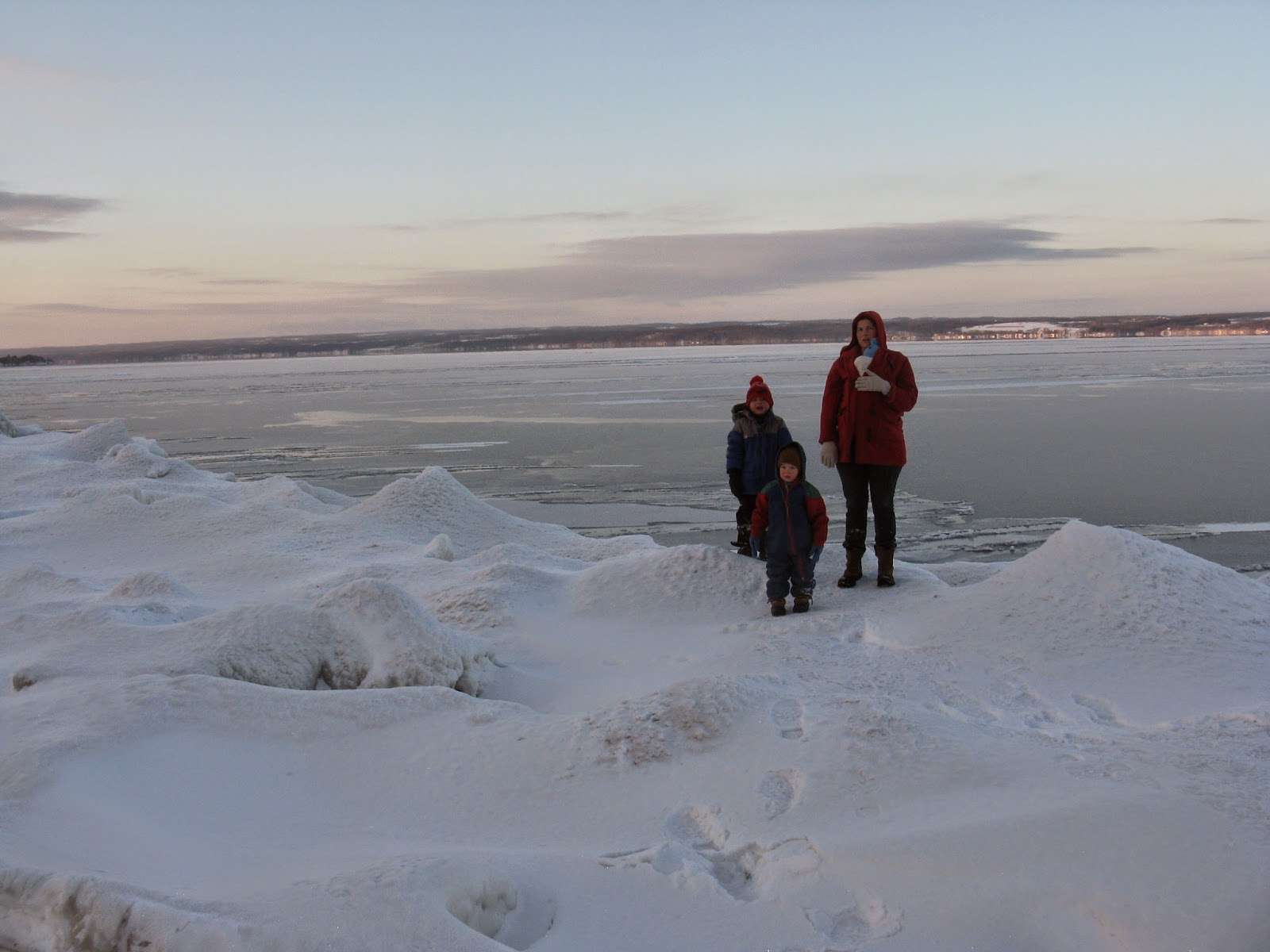 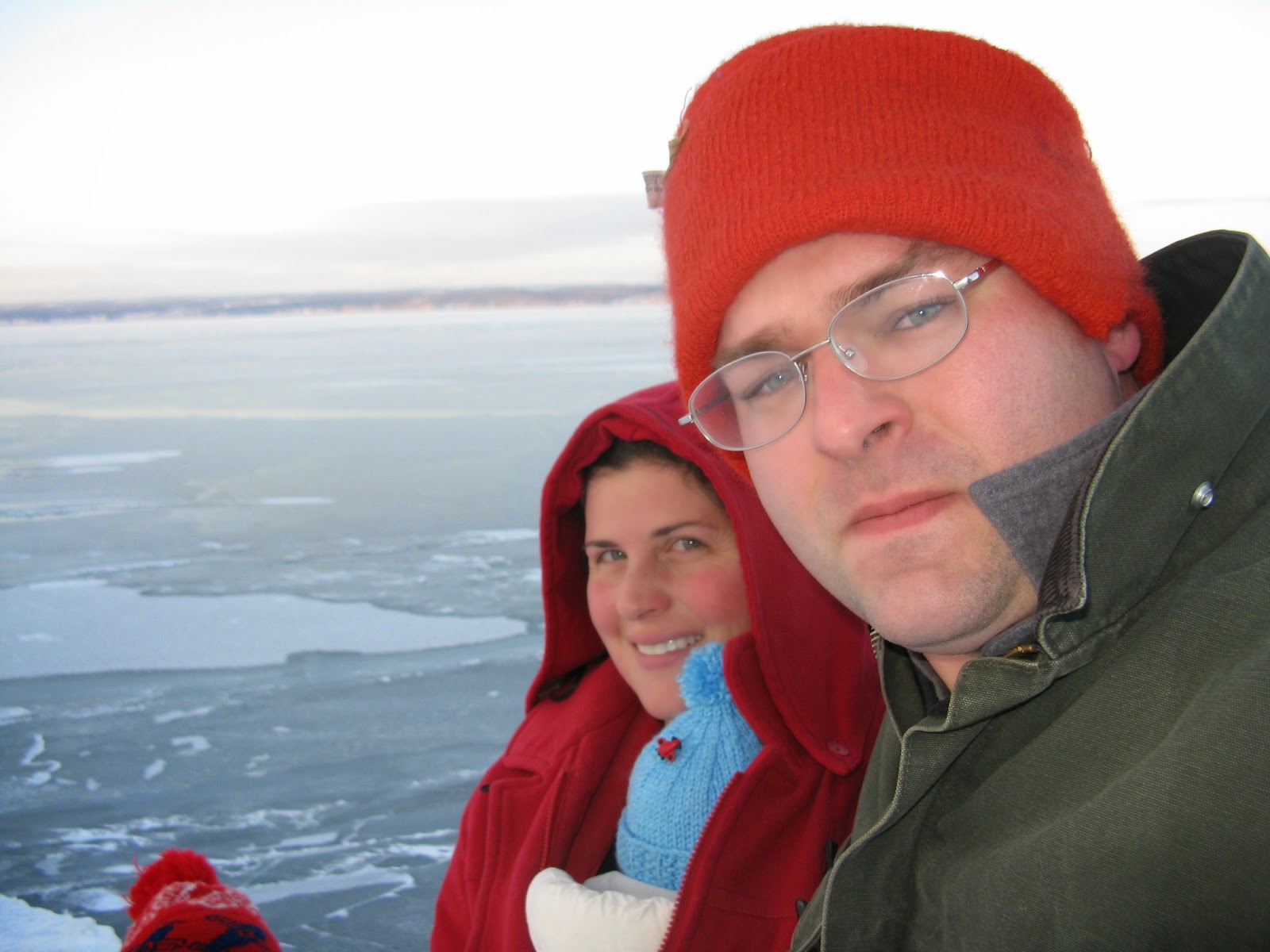 We tried to get a whole-family shot, but half the family is too short to make it into the shot. They were cold, though. 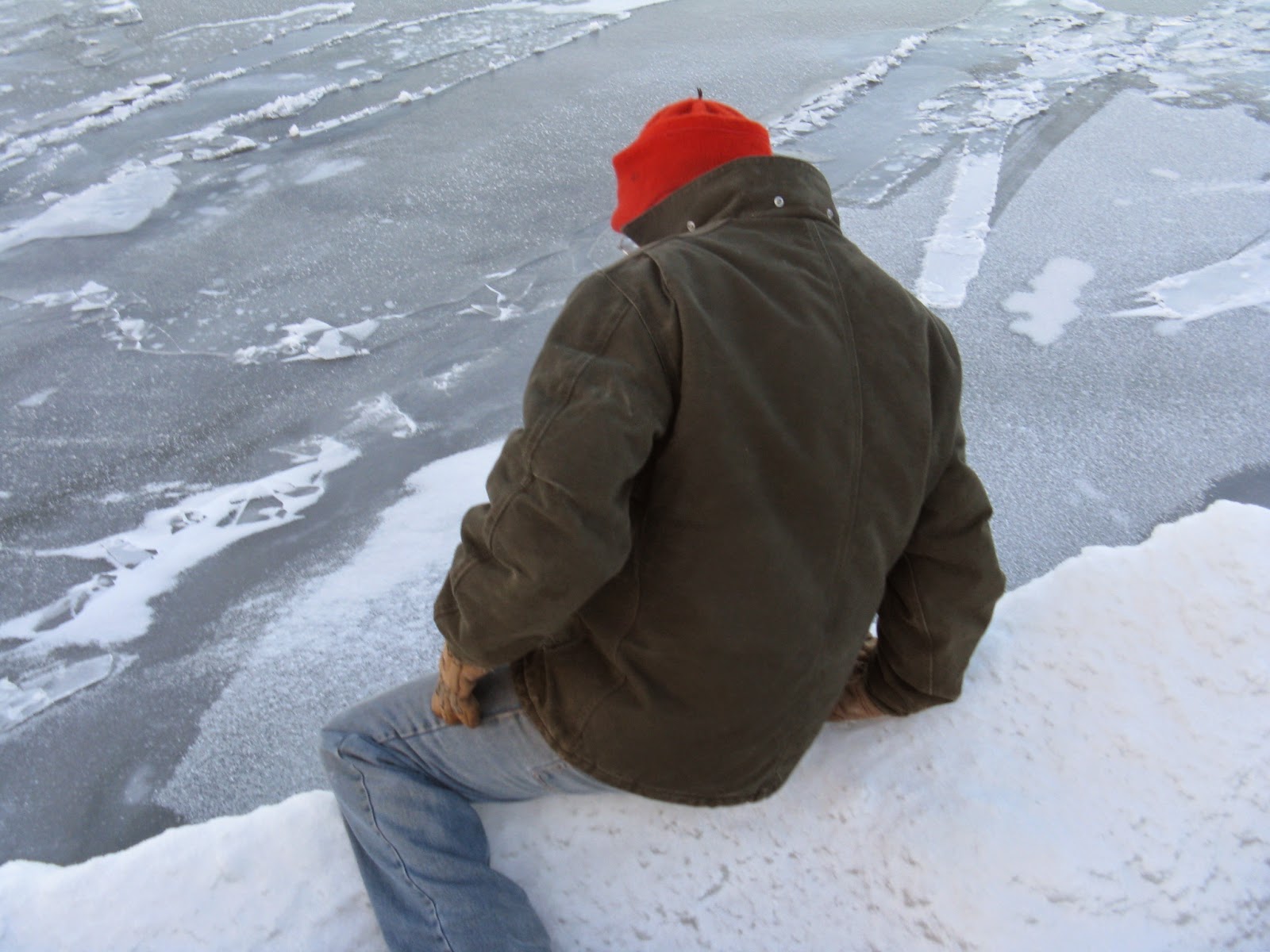 A. tested the ice and found it to be about half an inch thick. Not thick enough to support his weight, though Cubby suggested perhaps it would support him and Charlie. We vetoed this idea. That would be even colder. 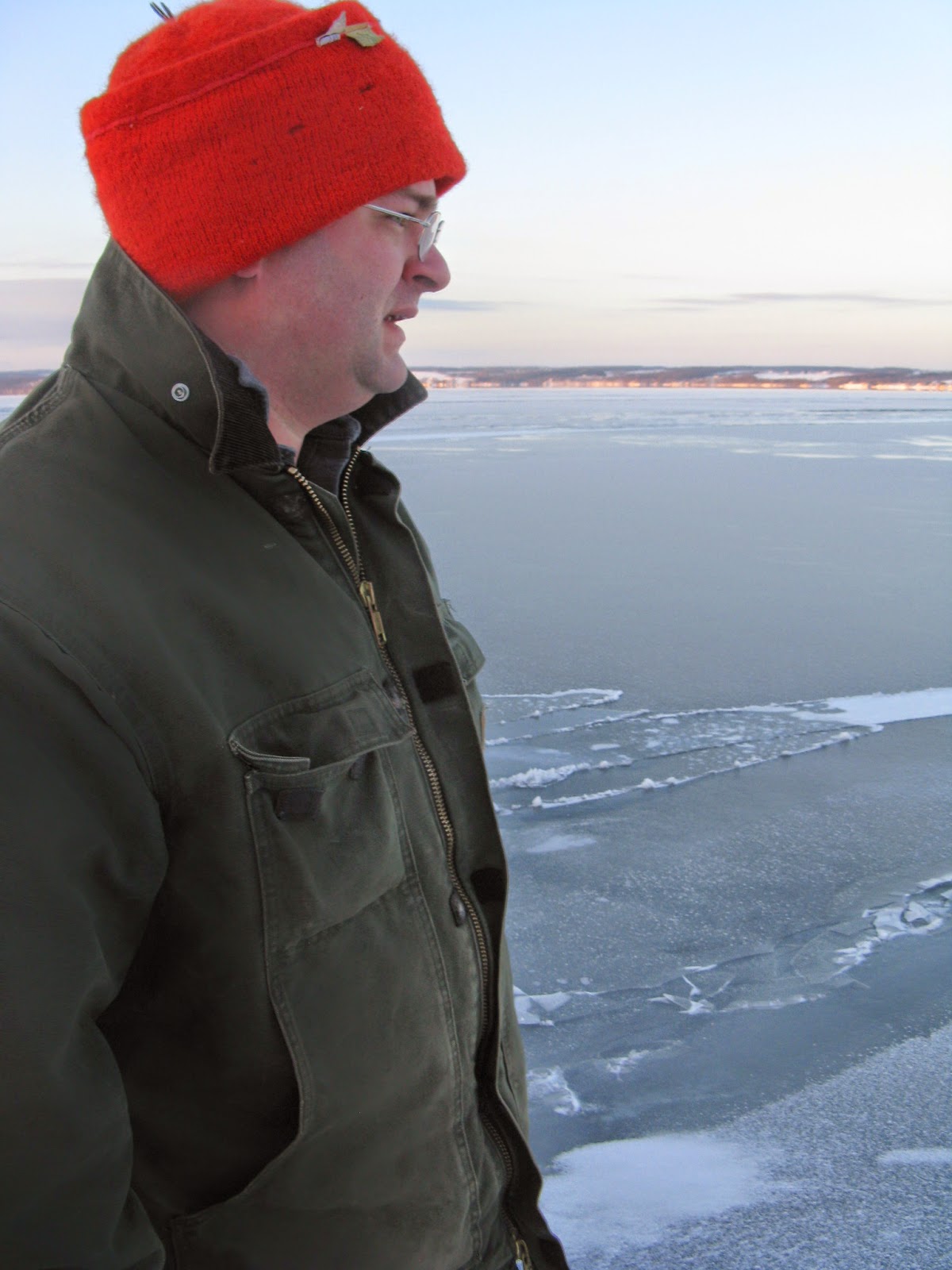 This is a man whose greatest hopes have been realized.

After photos and appropriate gazing in awe at the lake, we all trekked back to the house, where it took the children about half an hour, a muffin apiece, and a cartoon to recover. But we can say we were all there when the lake froze in 2015. Witnesses to history, that's us.

Also, COOOOOOOLD.
Posted by Kristin @ Going Country at 6:50 AM 5 comments:

Labels: all about me, Charlie, Cubby, family, Jack, the A team, weather

Twenty degrees and sunny? Time to get the hell out of the cabin. 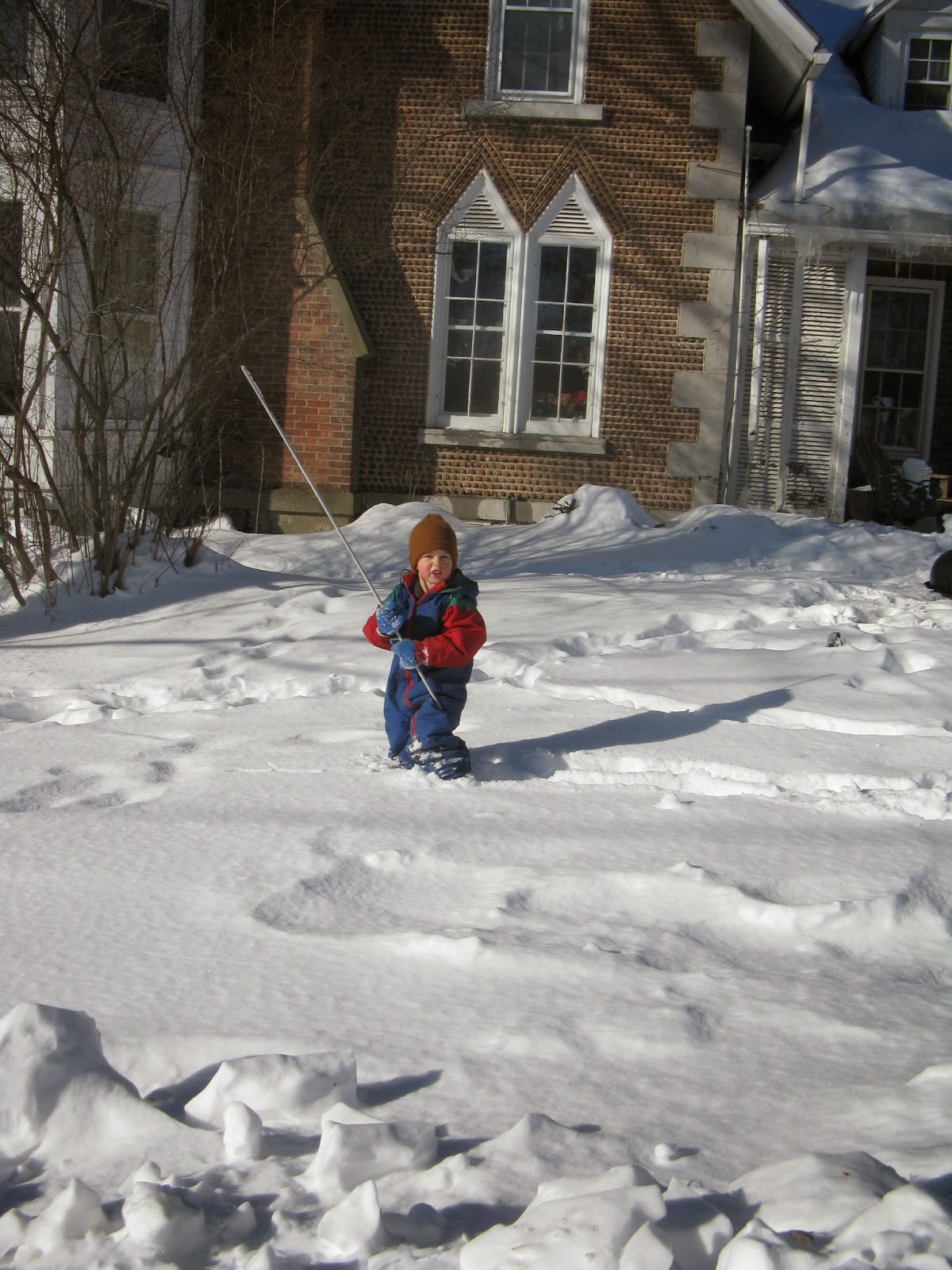 Spear hunting with an electric fence fencepost. The cavemen didn't have fiberglass, but it's the best we can do. 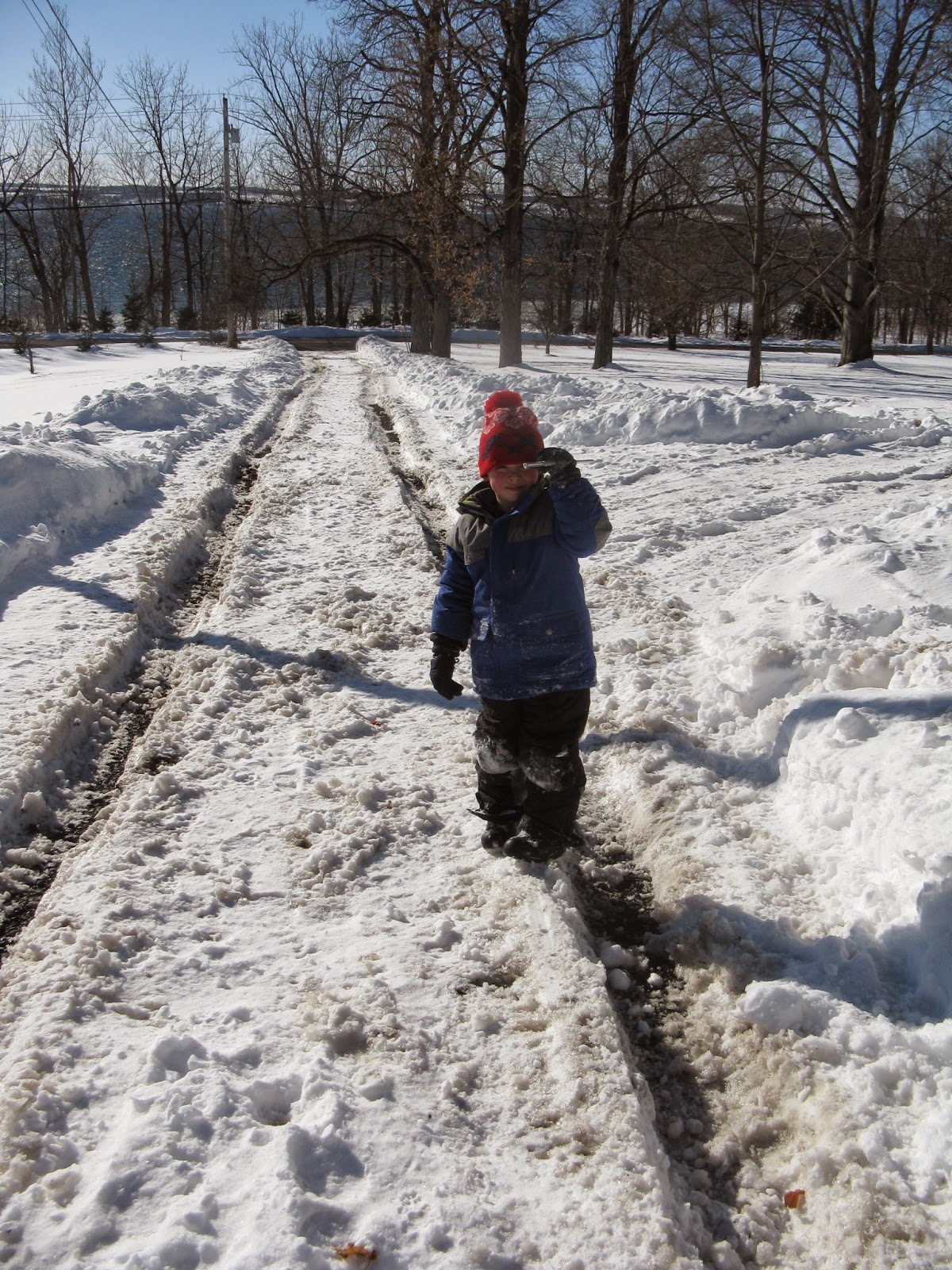 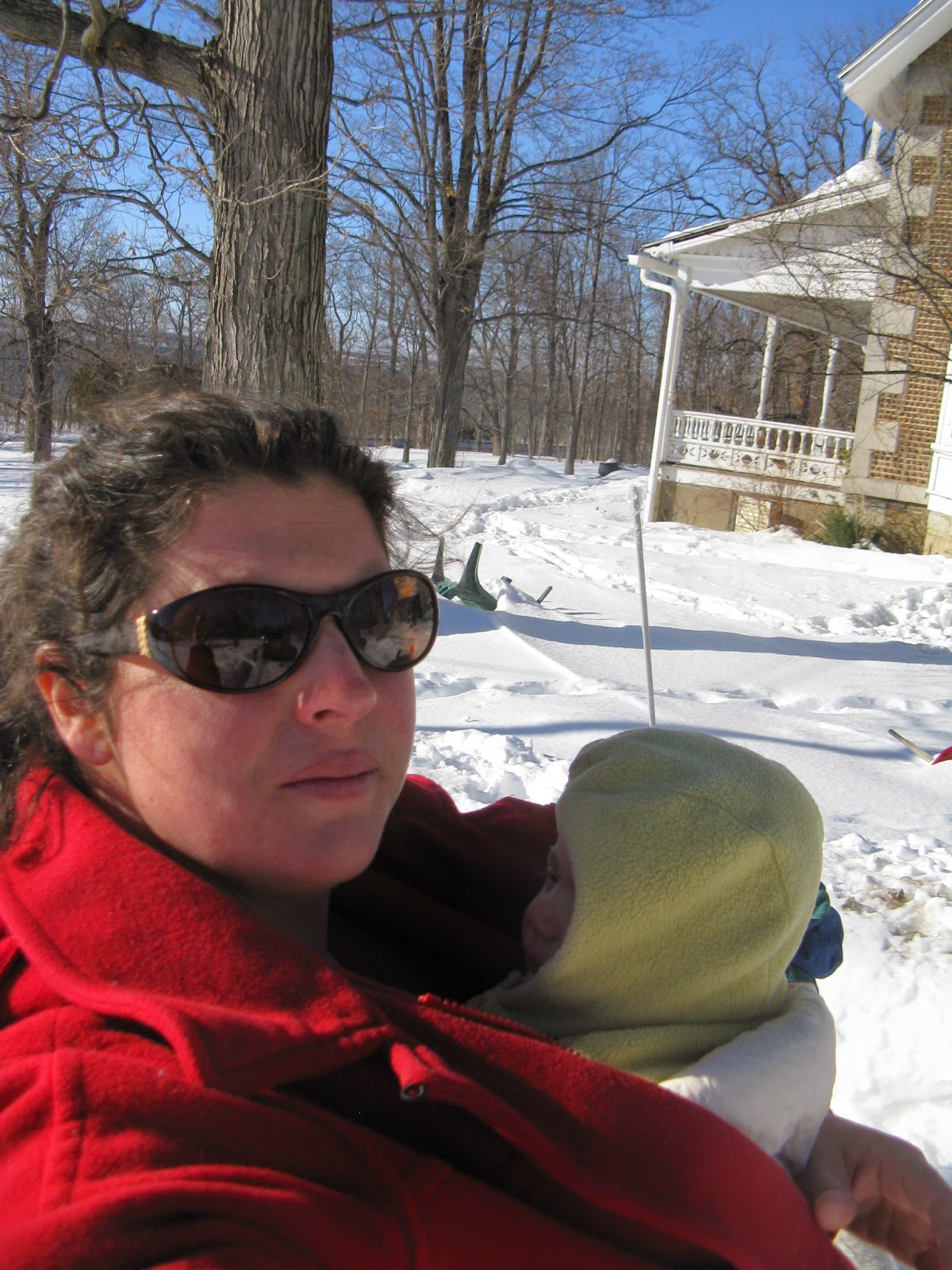 Jack was there, too. No spear for him, though. 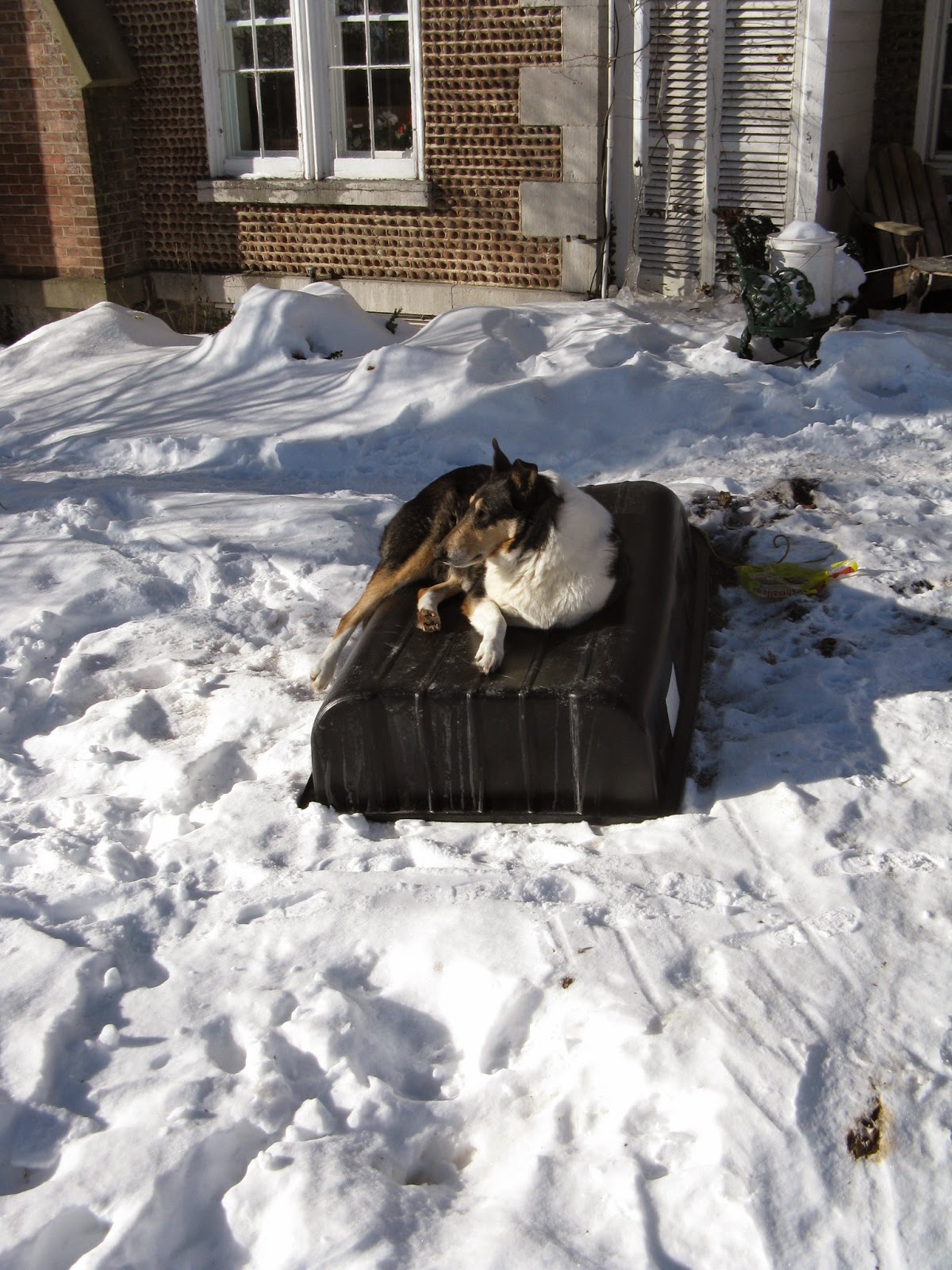 This is the dogs' favorite perch at the moment. Nothing like passive solar heat. (It's an overturned utility sled, in case you were wondering.) 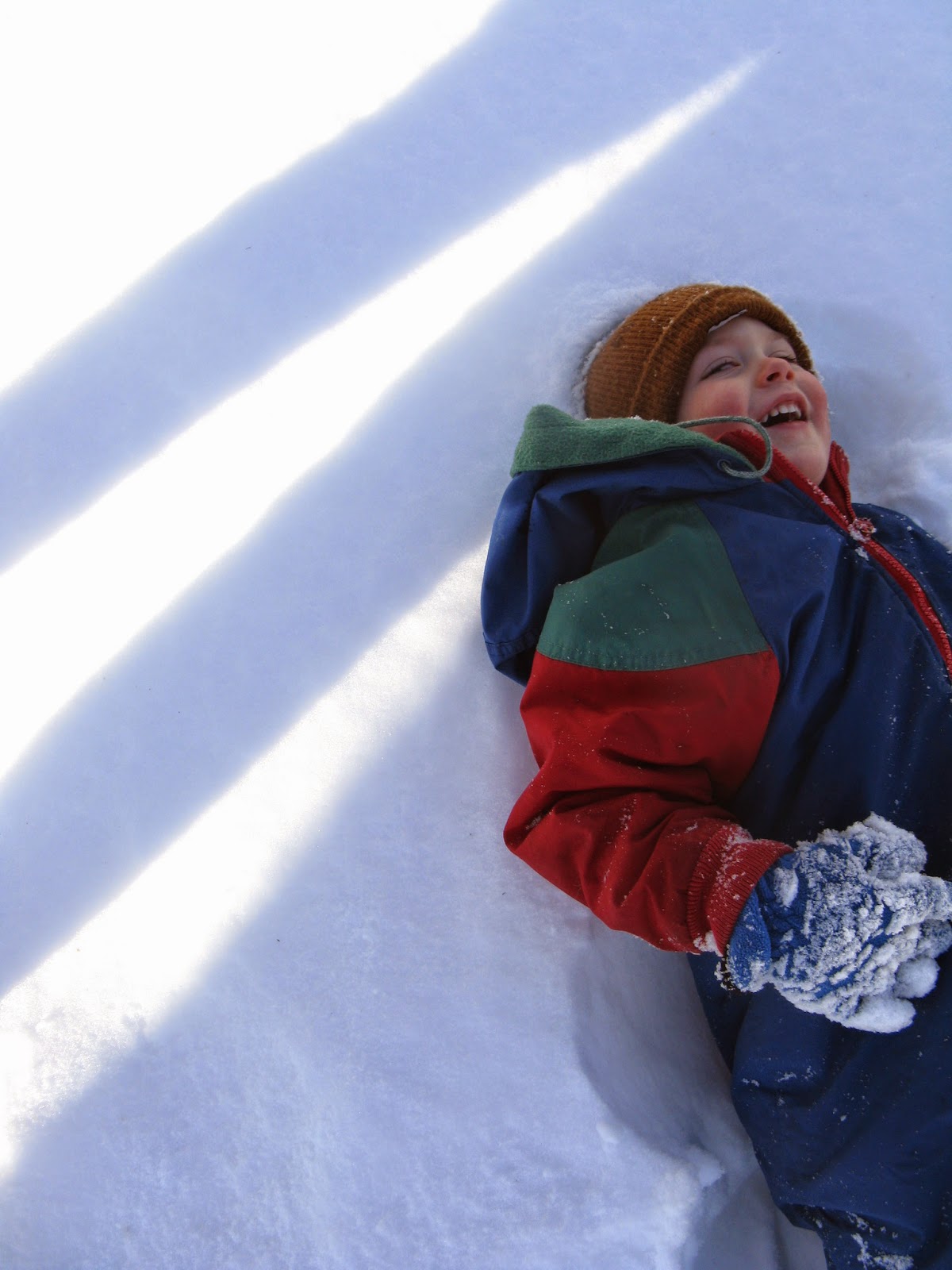 Charlie spent some time "sleeping in the snow." Sounds comfortable. 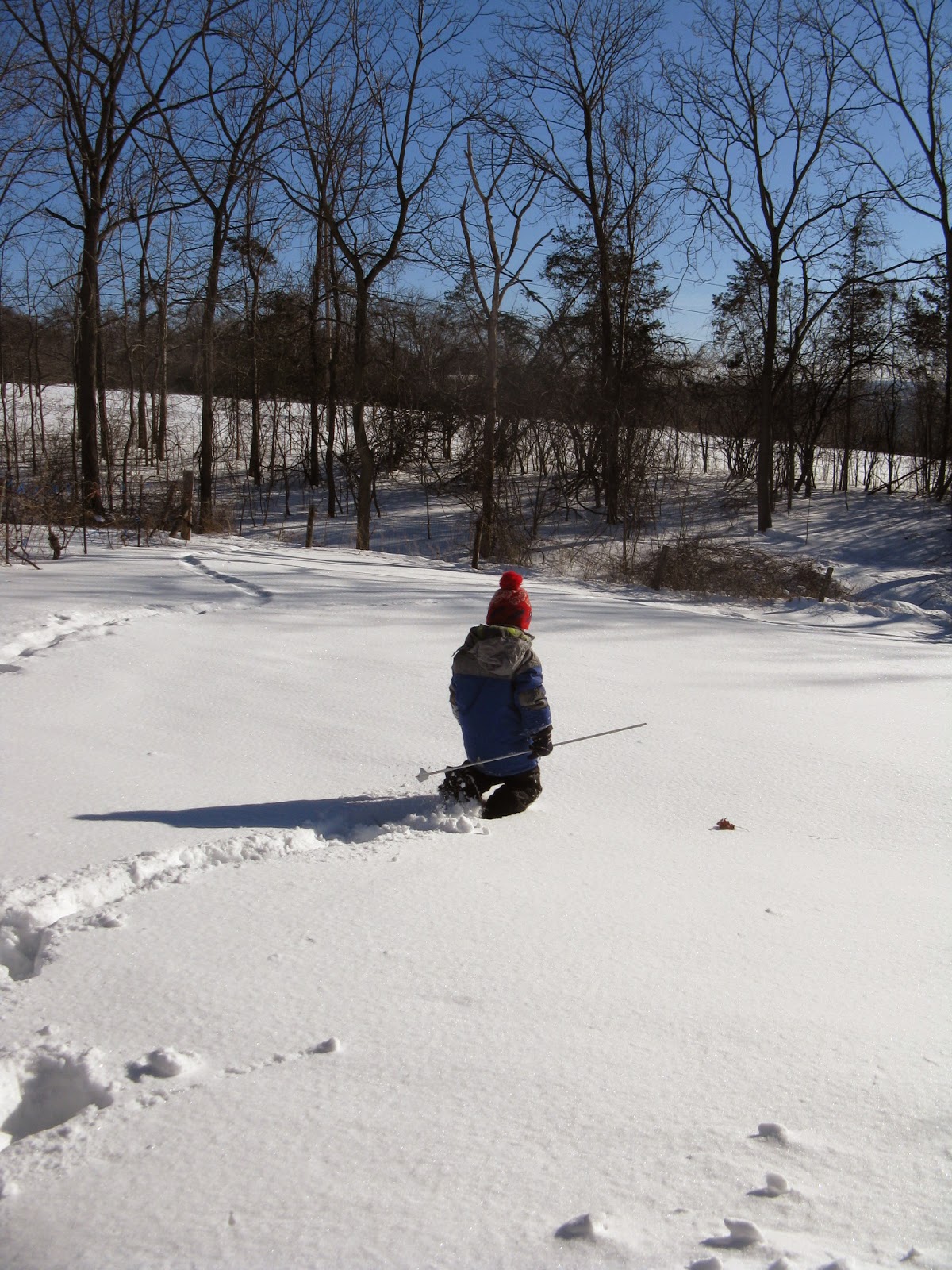 And Cubby spent some time spear hunting in the paddock. He told me it's the perfect habitat for giant ground sloths. They did live in grasslands, but they also went extinct about 10,000 years ago, so his odds weren't good.

We were only out for about an hour, but it made us all much happier. Sunny days are here again. Well, occasionally.
Posted by Kristin @ Going Country at 9:28 AM 2 comments:

Still Hot, Even Though It's Cold

Because of the cabin fever, get it? Whatever. This still kind of sucks.

Want to see the tunnel we navigate to get into and out of the preschool? It's higher than Charlie's head. 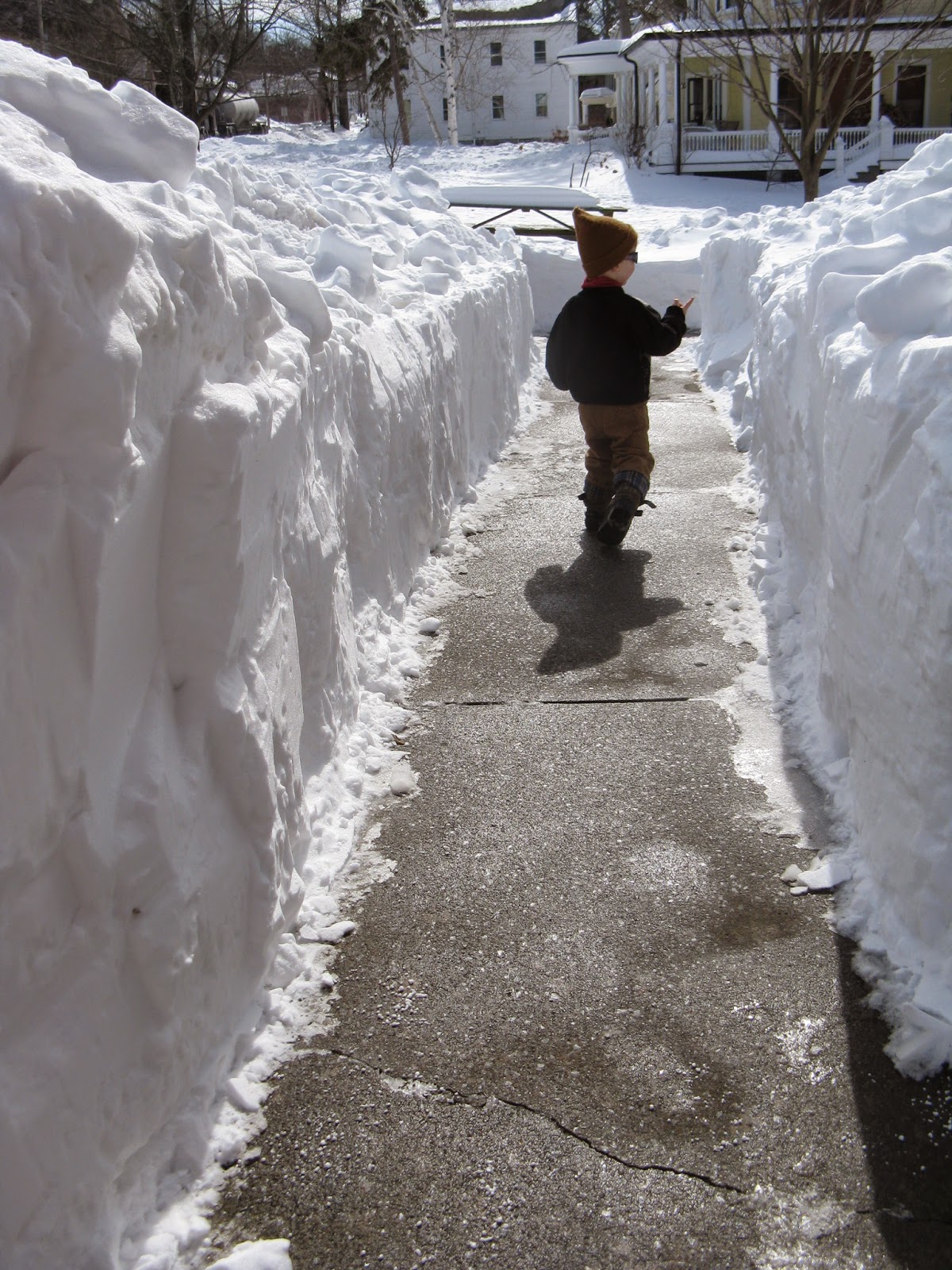 It was five degrees with wind, and no, he is not wearing a coat.

The other day when we were sitting around inside--as we will be forever and ever, amen--Cubby tried to make a catapult out of Tinker toys. He brought it to me and asked me why it wouldn't shoot. I explained that he needed a rubber band or something to provide the tension that would then be released and . . . you know what, Cubby? I bet the Internet could help us with this.

So we made a catapult. 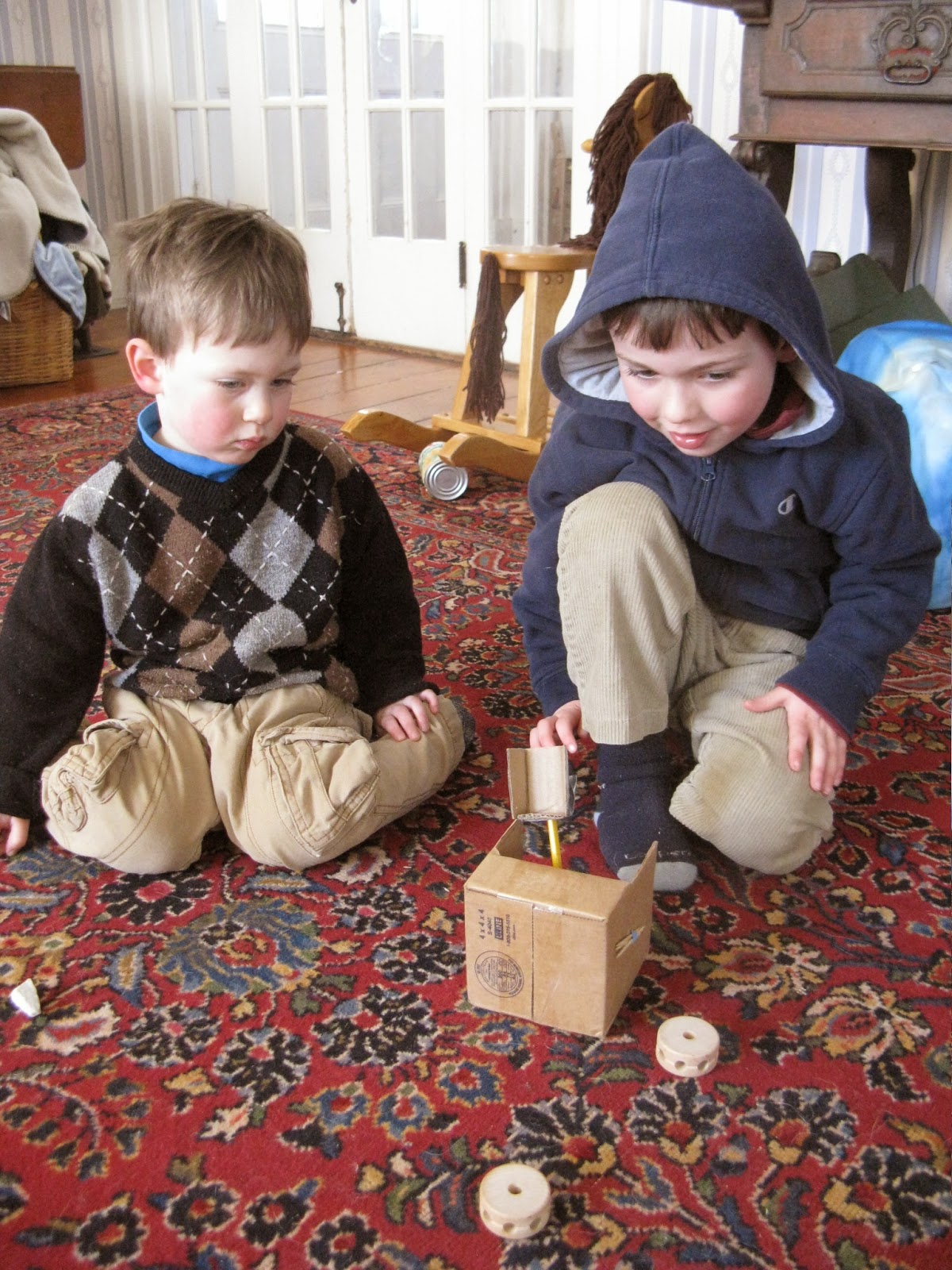 The only craft my children have ever shown the slightest interest in.

It kept them entertained for about fifteen minutes before they lost interest. I'll take it.