Greek Romances and "The Hobbit"


Charlie recently finished reading The Hobbit and was fascinated by the roman numerals used for the chapters in that book. I explained what each letter stood for and how to read them in order to figure out what number was represented.

It took me a few minutes, though, to connect that with his question this morning: "How do you type Greek romances on the computer?"

Friday Food: Thanks for the Photo, Sis


Apparently, I didn't take a single picture this week. But just as I was about to start typing this up, my sister sent me a photo from nine years ago. Kismet.

Long version: A. took pity on me and prepped some more elk, deciding to make a recipe he found for a "one-pot Mexican beef and rice" or something.

You know what he made? He made meat+rice+cheese.

It always works, no matter what you call it.

Long version: Time for an elk break! I pulled out some kind of random, on-sale sirloin pork roast that's been in the freezer for awhile. I coated it in a spice mixture of salt, pepper, garlic powder, and thyme and roasted it until my meat thermometer said it was done.

The thermometer lied. I pulled the roast out and started slicing it, only to find it all pink in the middle*.

So I sliced it anyway, then added it back to the sauce I had quickly made with the pork juices, some beef stock, and mustard and put it back in the oven for a few more minutes. It turned out pretty well in the end.

Long version: This was not my plan for dinner. My plan, however, did not include getting home late from a 4-H meeting that I thought was on Wednesday.

I didn't realize the meeting was this day until I was halfway through my workday and unable to pivot on my dinner plan for after work. Luckily, there were quite a few different kinds of leftover meat, so I just heated all the meats up, divvied them out, added bread and butter and the green beans, and listened to all the complaints because everyone didn't have the EXACT SAME food and everyone wanted what the person next to him had.

And speaking of kids and fun! Here we have the promised photo courtesy of my sister, featuring Baby Cubby eating my knee: 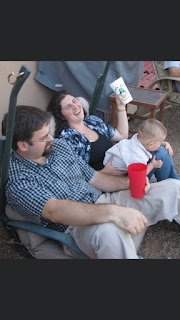 The accompanying e-mail from my sister said, "You look so young and carefree." Yeah, nine years and three kids ago, I guess we did.

Long version: Kibbeh--which is a sort of Middle Eastern meatball traditionally made with bulghur--seemed like a good use for some of the elk meat. I made it in the food processor, adding chunks of elk, onion, leftover rice, egg, cumin, salt, and pepper and whirling it around until it formed a very unappetizing and sticky paste that I rolled into balls. These were waiting for me in the refrigerator on Monday, but were just fine waiting until Tuesday.

I just baked those until they were cooked through.

The yogurt sauce is plain yogurt, mashed garlic, lemon juice, salt, and pepper, and is really good on both the kibbeh and the roasted potatoes.

The tomatoes in the mushrooms were the very last of the tomatoes picked by Jack and Poppy over a month ago. Almost all of them eventually turned red. These ones were kind of sad and wrinkled, but still tasty.

When I was roasting the potatoes the day before, I put about double what I needed on the pan and roasted them until they were soft and then removed half of them to save for the next day.

Well, I thought they were soft. They weren't, quite, which was annoying.

The pinto beans were just plain beans I had cooked a few days before to have on hand.

And we had apple slices instead of a vegetable because I'm down to cabbage and a couple of carrots for a vegetable. I even used up all the frozen vegetables. But we did have fresh apples, which is kind of odd. The kids were happy, though. They thought it was a great treat.

There are those low expectations working out for me again.

Long version: I was going for a kind of minestrone with the soup, and it was kind of like minestrone. Needed more tomato, though.

The carrots in it were the tiny ones from our second planting that I harvested after the hard freeze last month. None of them were thicker than a pencil and not even as long, and I was thinking it wasn't even worth the effort in digging them up and washing them. But then I ended up with a cup of carrots for the soup, so I guess it was worth it in the end. It always is.

* Yes, I know current advice is that pork can be a little pink, but this was a LOT pink, and anyway, I don't like it pink. Still freaks me out, no matter what the recommendations by food people are these days.