I Got the Fever

Cabin fever, that is. Or would that be Blackrock fever? I don't live in a cabin, thank God, but even in our big-ass house, this winter is getting really old.

What's that? You're sick of hearing about the historically bad winter weather and those of us who are getting very tired of it? Yeah, well, we're sick of living with it, too, believe me. And if I say I have cabin fever, you can be assured that it's real bad around here, because I am the most extreme homebody you will ever meet. I do not like to leave our property pretty much ever. But with all this damn snow, the older kids don't want to go out to play because they can't go anywhere. They're stuck just wandering around on the semi-shoveled paths and the driveway that keep getting drifted over. It's boring.

So if they don't want to go outside, that means they are inside. With me. All day. ALL DAY.

This is why I made the desperate decision this morning to go to the grocery store in the Small City. With all three children. So that's a forty-mile round trip in the car plus three kids to wrangle in a store, all to get some tortillas and milk. And this would be the first attempt to get through a store with all three children to manage.

It sounded like a good plan. This is how crazed I'm getting. We just had to leave the house. HAD TO.

I had A. start the minivan before he left for work so it would be all warmed up for our big adventure. And then he got stuck in our excessively long driveway, because he strayed too far to one side while backing down and ran into one of the enormous piles of snow that hem in the whole driveway. He shoveled himself out and advised me not to go anywhere.

I figured he was probably right, so we all settled down into the living room, where Cubby and Charlie immediately began fighting over a pencil or something equally insignificant, and I was all, "ALL RIGHT. EVERYONE PUT YOUR BOOTS ON; WE ARE OUT OF HERE."

I figured if we got stuck in the driveway, we could just walk back up to the house and at least we would have gotten out of the house for five minutes and had an adventure. In the five-degrees-with-wicked-wind cold. Hooray.

To my surprise, however, we did make it down the driveway and all the way to the grocery store, which was also navigated without any drama (this time). Then back in the car in possession of such thrilling items as bananas and cheese and back to our crazy driveway tunnel, which I once again managed to maneuver, despite slaloming the whole way and very nearly grinding to a complete stop halfway up.

And that was it. Our big outing. To the grocery store. But that was two hours during which I was not sitting in the chair in the bay window holding a baby and listening to Cubby and Charlie squabble over paper or whatever. It ain't exactly a cruise to the Bahamas, but it's the best I could do.
Posted by Kristin @ Going Country at 10:29 AM 4 comments:

Labels: all about me, Charlie, confessions, Cubby, Jack, the A team, weather

A Moment in Time 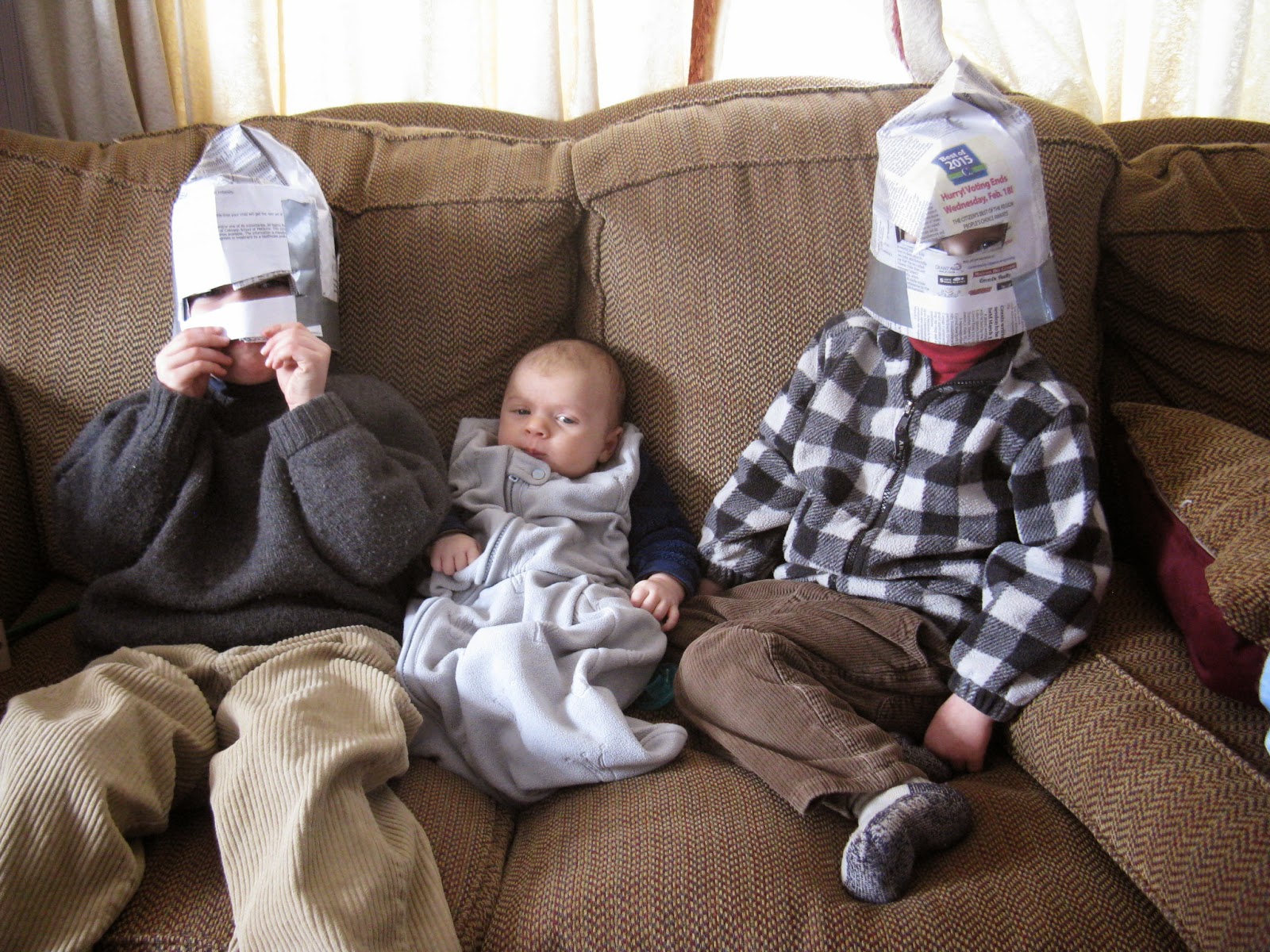 Jack is understandably dubious about being placed in the middle of these two weirdos. But two weirdos who will teach him the fine art of battling in newspaper helmets. Because that's what brothers do.

Bacchanalia at the Pediatrician's Office

Happy Fat Tuesday, my lovelies! I hope you have something appropriately sinful to eat or drink today. I celebrated Fat Tuesday (part of my heritage, as you may remember) by taking all three children to the pediatrician's for Jack's two-month check-up. And vaccinations.

It was totally a party.

You should have seen the look on the pediatrician's face when he walked into the tiny exam room to be confronted by me and three boys. Cubby and Charlie were very well-behaved, but they keep the exam rooms about 80 degrees for the comfort of the naked babies being examined, so us fully dressed folk were about to pass out from heat stroke. And we were in there for about half an hour from beginning to end.

Actually, the temperature in the exam room was probably the closest we'll get to the Mardi Gras atmosphere today.

Jack was pretty good about the shots and actually fell asleep as soon as we got in the car, so I decided a little Fat Tuesday celebratory treat was in order for those of us with teeth. We went to the bakery in the Small City that makes the best doughnuts in the entire world (the best I've had, anyway, and I've sampled more than my fair share of doughnuts in my time) and got a doughnut for all of us. It's not a King Cake, but it's the best we're gonna get in this godforsaken winter wasteland.

P.S. Jack is now 12.5 pounds and 24 inches long. Just in case you were consumed with curiosity.
Posted by Kristin @ Going Country at 11:15 AM No comments: