Okay, are you ready? I want everyone to take a deep breath before you view this photo, the better to make the appropriate exclamation. Here we go . . . 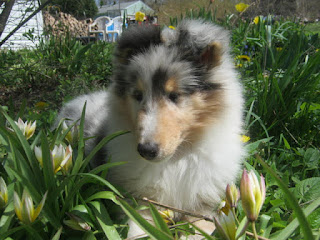 That's Sky. He's a ten-week-old rough Blue Merle* collie puppy that the MiL brought home yesterday. He's her retirement gift to herself, but of course, she must share him with the small boys of the household.

Cubby has more or less not left the puppy's side since his arrival. 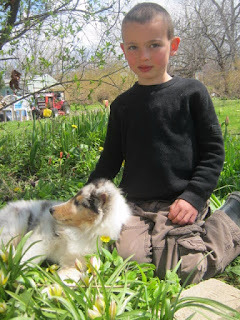 Charlie likes the puppy, but is not so attentive. 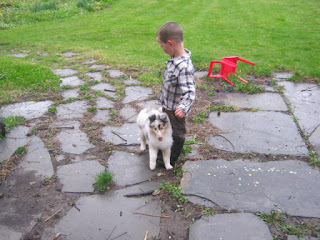 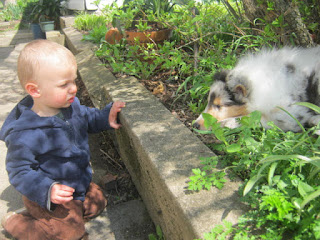 Puppies are okay, but not as fun as the ducks.

As for the older dogs . . . Mia is resigned to her fate as always, though doesn't go out of her way to engage Sky, and Otty tried to bite his face off within ten minutes of his arrival, so he prefers to hang out with the humans. Can't say I blame him.

At the moment he sticks close to the people and his crate, but I'm sure he'll grow into his natural role of raccoon killer and carrion chewer. He has plenty of time.

* This refers to his coloring and it means he has patches of black, white, and bluish gray. Rough means fluffy instead of short-haired like Mia and Otty.
Posted by Kristin @ Going Country at 12:29 PM 4 comments:

When I was young, between the ages of five and eight, my family lived on the island of Oahu. As is only to be expected when living in Hawaii, we went to the beach a lot. We did not live particularly near the beach, however, so it was kind of a long drive every time.

It was boring for little kids, so to entertain himself, my brother--about ten years old at the time--would put on his swim goggles, wrap his towel around his head, stick up a sign in the window announcing himself as "The Masked Moron," and make faces at all the cars passing us.

Even at that young age, I mentally rolled my eyes and thought how dumb boys are.

I remembered this particular game a few years ago and thought to myself, "Oh my God, my own son is going to be a Masked Moron in only five years or so."

Yeah, that was wishful thinking. 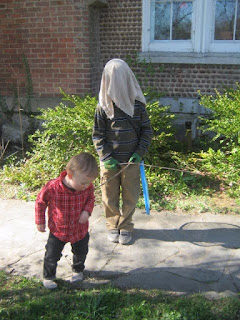 The next generation of Masked Morons has arrived.

You can see Jack is already taking notes for his own ridiculous masked play when the time comes. There are three of these boy things in my house, you know. I guess I'd better practice hiding my eye rolling now.

Labels: all about me, brothers, confessions, Cubby, family, Jack, randomness

More Fun All the Time

Day Two of Spring Break, a.k.a., The Week of Trial by Child:

Cubby appeared downstairs at 5:53 this morning, announcing that he had thrown up on his pillow. He then retired to the couch in the living room with a vomit bowl in case of further indignities.

Then Jack woke up and Cubby had to be relocated to the davenport* in the parlor with the doors shut to separate the invalid from a totally uncaring large baby who wanted to crawl on the invalid's face and put the vomit bowl on his head.

It's nice to have such a large house sometimes.

It's pouring rain outside, so I guess it's just as well that one of the Three Musketeers is out of commission and not going crazy in the house.

Now it just remains to be seen who else will fall victim to the virus. Stay tuned.

* A davenport is a couch, but since this couch is almost a hundred years old, it gets the designation of "davenport." Because that's what they were called when this particular piece of furniture was given to A.'s grandparents as a wedding present in 1928. History lives at Blackrock.

Day One of Spring Break, a.k.a., The Week of All Three Children, All the Damn Time:

Jack started babbling to himself in his crib in the room adjoining ours at 4 a.m. and continued for the next hour and a half. I didn't get him up and he did go back to sleep, but that was it for me. I was awake for the day at 4 a.m. and up at 5:30 a.m.

When I did get up, I found that the coffee maker had died. Luckily, the MiL has both a French press and a plain old filter cone thing, so I could still make my beloved coffee with chicory. It didn't taste the same, though, and I was grumpy about this.

Charlie woke up spoiling for a meltdown and eventually had one over his egg. Which ended up on the floor.

The children actually managed to play relatively well today, and were mostly outside despite the threat of rain.

The dead coffee maker inspired a trip to a store in the Small City, at which we also got some desperately needed shoes for Cubby, and socks and sunglasses for me. Because I like to spoil myself with fripperies. No one had a breakdown in the store and I only had to threaten Cubby and Charlie once for unauthorized cart pushing with Jack as the passenger.

There were enough leftovers in the refrigerator to have a tasty dinner without any actual cooking.

One day down, six more days of Spring Break to go.

Posted by Kristin @ Going Country at 4:47 PM No comments:

There's a thing at Cubby's school called "Thank You Thursday Notes." Every Thursday afternoon, the little kids sit down and write a thank you note to someone. It's a way to practice their writing, and also to be very cute, because there's not much cuter than a straggly, mispelled note thanking the dog for killing a squirrel.

Or at least, that's what Cubby has come up with to practice gratitude. He's written many notes to Daddy, thanking him for taking him fishing or camping or what have you. There have been even more notes to Charlie, thanking him for helping Cubby out of the stream or for playing knights with swords. A couple to Jack, thanking him for hugs. Even, as I mentioned, at least one note for Mia.

But have I ever been the recipient of a Thank You Thursday Note? I, his mother, who cares for him daily and, you know, GAVE HIM LIFE? No. Thank you notes for the dog, and not for his own mother?

But then, he arrived home last Thursday with this: 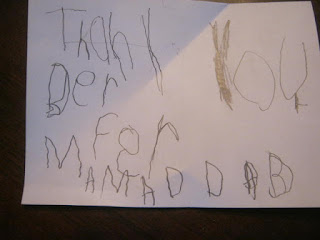 Did you catch that "Mama" down there? You see it? FINALLY.

Okay, so I had to share the thank you note with "Dad," but the inside part thanks us both for "bg hgs," which is apparently "big hugs." This is very adorable, so I suppose I can be gracious and share my long-overdue Thank You Thursday Note with A. Not that I have much choice.

What do you think it would take for me to get one just for me? Maybe I should kill a squirrel. It worked for the dog.
Posted by Kristin @ Going Country at 8:02 AM 3 comments: