All Is Not Lost

So maybe the dramatics on Thursday about The Blighting of the tomato plants and WOE IS ME NO TOMATO CANNING were a little premature. Because I canned seven quarts of tomatoes yesterday. I mean, seven quarts is ridiculous, just a tiny fraction of what I SHOULD be canning (last year was 39 quarts of plain tomatoes and numerous pints of salsa, ketchup, sauce, etc.), but at least it's something.

Also, those seven quarts make me feel a bit less of a fraud, since OF COURSE this is the year I contributed to a cookbook as an expert on canning (check it out: I'm famous--for canning*). Okay, so it's true that tomatoes aren't the only thing I can--so far I've done pickles, beets, and mulberry juice as well--but they are the major thing I can.

If I'm lucky, I'll get one more harvest from the tomato plants big enough to make a batch of salsa. Which I will then hoard like a miser, because one measly batch of salsa is not going to go very far if I have to SHARE it.

You see what deprivation does to a person?

* Of all the things I ever thought I might become famous for, CANNING was not one of them. Especially at the age of 29. Pass the Geritol.
Posted by Kristin @ Going Country at 5:00 AM 6 comments:

Wait, Did You Want More Details About that Baby Thing?

Yeah, that was the impression I got. But be forewarned that this is NOT about to become a pregnancy blog because . . . well, because I would find that boring to write. Besides, what would I do with all those stories about woodchucks and self-injury?

I had to wait, you see. I first found out myself when A. was on his big trip, so I had to wait until he got home before I could tell ANYONE. Then, I waited until I'd been to the doctor for the first time to tell the immediate family members (I haven't been sick or anything, so part of me was thinking I was making the whole thing up). THEN, I waited until after we heard the baby's heartbeat for the first time before we started telling the rest of the family members, friends, etc. And only after we had told everyone we knew in real life did I tell the world at large online. In fact, I waited until after I had my first sonogram, at which it was determined that the kid has all its limbs, a nose, both brain hemispheres, all major organs, and seems to be quite active. I have the blurry pictures to prove it.

I foresee much painful kicking in the future.

But now, no more waiting to tell. The game is up. Everyone knows that, no, I'm not just getting plump from too much ice cream--I have an excuse for my pot belly, dammit. Also an excuse to make A. do all the mowing.

I love this pregnancy thing.
Posted by Kristin @ Going Country at 5:32 AM 14 comments:

Labels: all about me, Blackrock, confessions, country livin', family, the A team

Not to take anything away from yesterday's exciting announcement, but there is another, much less fun, announcement to be made: The Blight has descended upon our garden.

You know The Blight. The New York Times has been squawking about The Blight since this spring, when it was discovered that many of the big box stores (thanks A LOT Lowe's and K-Mart) had sold seedling tomatoes infected with The Blight. It's the same fungus that caused the Irish potato famine in the 1800's, and it can infect both potatoes and tomatoes. The Blight was late in reaching us, but I noticed the first signs of it last week. So far, it only seems to have affected the tomatoes. I doubt if my plants will survive much more than a week now. And I don't even think all the tomatoes that are already on the plants will be able to ripen.

I'll allow you to ponder that for a second.

There will be no tomato canning this year. No salsa, no sauce, no canning throwdown. I will have to buy canned tomatoes this winter.

I don't think I can handle this.

And in related news, I have seen more than one article advocating the substitution of other fruits for the "T" in a BLT. I'm sorry, but a bacon, lettuce, and plum sandwich? GROSS. Even worse than that? Bacon, lettuce, and watermelon.

The End of Days appears to be upon us.
Posted by Kristin @ Going Country at 6:11 AM 13 comments:

And since I have some News (with a capital "N," yes) to share, I figure it might as well be in limerick form. Because why not?

There once was a girl named K.,
Who married a boy named A.
They were two for a while,
Till one day, with a smile,
They discovered a baby's on the way.

Who Wants To Eat a Mock Shoe?

You would, if it had a stick and half of butter in it. Would it make you feel better to know that it's actually spelled "maquechoux," and is just one of those crazy French words that's pronounced not at all phonetically? In this case, it's pronounced, yes, "mock shoe." So. I make maquechoux every year. It's a Cajun kind of side dish. Not one I learned from my mother, however. My mother, as far as I know, has never had maquechoux. But that's because my mother has never had several dozen ears of corn to dispose of in a pleasing and tasty manner. But I do! Enter maquechoux. Maquechoux has very few ingredients: corn, tomatoes, onions, bell peppers, butter, salt, water, cayenne pepper. The end. It's a side dish, meant to be served hot. I make a batch of it at the height of corn season (which is now--HELP) and freeze it for the winter. My batch is three quarts and maquechoux is, incidentally, fantastic dumped over mashed potatoes. Mashed potatoes aren't very Cajun, but what the hell. Neither am I. The MiL REALLY loves maquechoux, by the way. In fact, I make it mostly for her. Oh, did you want the recipe? Yeah, I thought so. I know what happens when I casually mention some food and fail to give you a recipe. Anarchy, that's what. Here we go . . . Not Mama Sue's Maquechoux
Ingredients
12 ears fresh corn
1.5 sticks of butter (the original recipe I use calls for a full 2 sticks, but I think that's overkill)
1.5 cups chopped yellow onion
1 cup chopped green bell pepper
2 large ripe tomatoes, chopped (the recipe says to peel--I never bother) OR .5 cups canned whole tomatoes, mashed with their can juice
.5 cup water
Salt and cayenne to taste (I use MAYBE an eighth of a teaspoon of cayenne--but I'm pretty wimpy) Instructions
1) Cut the corn from the cob (using, of course, my patented no-flying-corn-kernels method--not really on the patented part). Scrape the cobs with the blunt edge of the knife to remove the "milk." Set aside.
2) Heat the butter in a large, heavy pot over medium heat. Add onions and bell pepper. Cook, stirring, until golden and soft, about 10 minutes.
3) Add corn, tomatoes, and water. Cover and simmer over medium-low heat for 15 minutes.
4) Add salt and cayenne and cook until corn is very tender, 20-30 minutes more.
Posted by Kristin @ Going Country at 4:58 AM 7 comments:

These are certainly not the first humid, hazy summer days I've experienced. And yet, I somehow never noticed what the sun looks like when it's setting in weather like this. Because of the haze, you can look directly at it, and it's this incandescent red-orange sphere just hanging there in the sky. It looks kind of like the Apocalypse, but in a cool way.

I noticed it for the first time when I was walking back down to the house after shutting the chickens in their coop a couple of nights ago. And again last night, there it was. I was determined to get a picture of it this time, so I went down to the beach where the view of it wouldn't be obstructed by trees. But when I got down there, the haze had obscured it too much, and the glow of it was so diminished, it was barely visible. I took the picture anyway, but it doesn't convey how incredibly impressive the sun looked. Like so much else in life, you just had to be there. 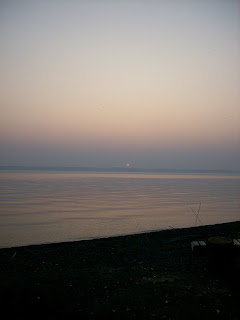 Disappointing. You'll just have to trust me.
Posted by Kristin @ Going Country at 4:48 AM 5 comments:

It Is Hot and Humid, Yes

The kind of hot and humid where I never stop sweating and the dogs never stop panting.

The kind of hot and humid where the towels in the bathroom never quite dry.

The kind of hot and humid where the refrigerator drips condensation.

The kind of hot and humid where bread goes moldy in two days.

The kind of hot and humid where the bed sheets always feel a bit damp.

The kind of hot and humid that requires the window fan in the bedroom to be on high, creating a wind tunnel effect, and yet still not cooling the room much.

The kind of hot and humid where I start coveting my neighbors' goods--specifically, their window air conditioning unit.

The kind of hot and humid where the only sensible course of action is driving to an air conditioned movie theater and parking myself in a seat with a large, ice-filled Coke to watch "Julie and Julia."