If I can get Poppy to sleep just as Jack goes down for his nap on a day when there's leftover soup* in the refrigerator and I have a good book to read? 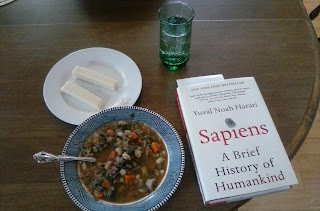 Welcome to my happy place.

Incidentally, I'm about 200 pages in to that book, and I recommend it. There's a lot of information in it, and a lot to think about, but it's not particularly challenging to actually read. This makes it perfect to combat the motherhood brain atrophy that comes with a new baby. It's a thing, as you may remember.

Happy Friday, my lovelies. I hope you get to visit your happy place, too.

* Made, pleasingly, in part with some of the radish greens I diligently blanched and froze in the summer. So satisfying.

At Least the Floor Is Mopped

And so, as a reminder to myself that I still do things even on days when I feel like I can't do anything, on this useless-feeling day, I have done the following:

Packed lunch for Cubby and Charlie.

Washed and put back on the sheets from Cubby's and Charlie's beds.

Went outside with Jack, even though it was ten degrees, and swept the new snow off the front steps and the Honda.

Swept and mopped the upstairs floors.

I also read some books to Jack and even built a Lego thing for him, which is something I usually resolutely avoid.

Aaand, A. just walked in the house and said, "You look sick." I am not sick, but apparently I look that bad. Swell.