I started this blog eight years ago today. That's a long time ago, man. And 2,051 posts is a lot of damn words.

I should have something more profound to say about that, but Jack was up a lot last night with a cold and then Cubby was wandering around at 5:30 a.m. because his skin was dry and he needed lotion and Charlie was wailing to be covered back up and . . . well. I'm tired. And I guess I just don't have much profundity on tap this morning*.

So we'll just leave it at this: Happy eight years to Going Country. Long may it prosper.

* I suppose that little glimpse into my morning is as good an example as any of how my life has changed in the past eight years. You want to not recognize your life in a few years? Have multiple kids. Works every time.
Posted by Kristin @ Going Country at 4:04 AM 6 comments:

Labels: all about me, Charlie, Cubby, Jack

At 8:30 this morning, Charlie was ready to go outside, Cubby was refusing to go outside, and I really, really wanted them out already. For all of our sakes.

So I started to get Charlie dressed in his outdoor apparel, announcing loudly enough for Cubby to hear from the other room, "Well, Charlie, I guess you can have Cubby's spear then."

Cue pounding feet in the living room and shrieks from Cubby of, "NO! That's MY spear! Don't let him go out until I'm dressed, too!"

Labels: all about me, brothers, Charlie, Cubby, randomness

Exercise for the Atrophied Brain

Last Friday was not a particularly good day. The weather was cold and unfriendly, so the older kids were not outside as much as I would have liked (which is, um, pretty much all day). Also, unbeknownst to me, Cubby was starting to feel the first symptoms of the cold he would clearly have by the next day, which translates into a lot of whining and fighting with his brother.

It was kind of ugly.

So I went out to retrieve the box, figuring it was something the MiL had ordered. But no! It was to us! It was from Amazon! It said "Gift Enclosed" right on the front!

I thought it was likely something for one of the kids, since I am unlikely to receive random gifts. But when I opened it, the surprises continued, for there, with a message wishing me a happy birthday from my brother and his family, was Pioneer Girl: The Annotated Autobiography.

Yes. The brand-new autobiography by Laura Ingalls Wilder. The autobiography on which all of the Little House books so beloved by me as a child were based.

How excited was I? SO EXCITED. I called my brother immediately to thank him. He was sort of shocked that it had just arrived, since he pre-ordered it in November. The MiL told me that the publishers of the book thought it was be a niche sort of book and hadn't anticipated the great interest in it, so it's already been re-printed a few times. She knows this because her friend's academic colleague was the woman who edited it.

I started reading it that night. Or rather, I started trying to read it that night. Because here's the thing about this book: it is a scholarly work. The text is annotated, meaning there are as many explanatory footnotes about the history, the locations, the people, etc., as there are pages of actual text written by Laura Ingalls Wilder. It is not a quick read. Especially since I usually have about fifteen minutes to read at a time before someone interrupts me.

But I am SO GLAD I got this book, because I think it's about the only subject matter that is interesting enough to me that I'm willing to take the time to plow through it. And I really, really need to do that, because my brain has atrophied.

Really. It has. I used to be able to focus and concentrate and read all kinds of books. I realized during my last pregnancy that I was mostly re-reading all my old books or sticking to things like magazines, with very occasional easy-read books here and there.

This is not good.

Not everything I want to read about comes in easy-read books. But it was almost like I was out of practice or something. My brain was out of shape. I knew I needed to take the time to start reading the more challenging books again, but the very thought made me feel tired, and I just . . . didn't.

But I am now, starting with Pioneer Girl and its thousands of footnotes. I'm forcing myself to read slowly, to examine the maps, to not skip over the many explanations of related historical events. I'm getting my brain back into shape. It's kind of painful, actually, but it can be done.

And Laura Ingalls Wilder (and Pamela Smith Hill) will get me there.

A. spent almost all weekend dealing with the giant garbage can of sap--plus some buckets--that the maple trees flooded us with last week. He made his signature woodchuck evaporator out of cinder blocks and old stovepipe and spent many hours standing around it. 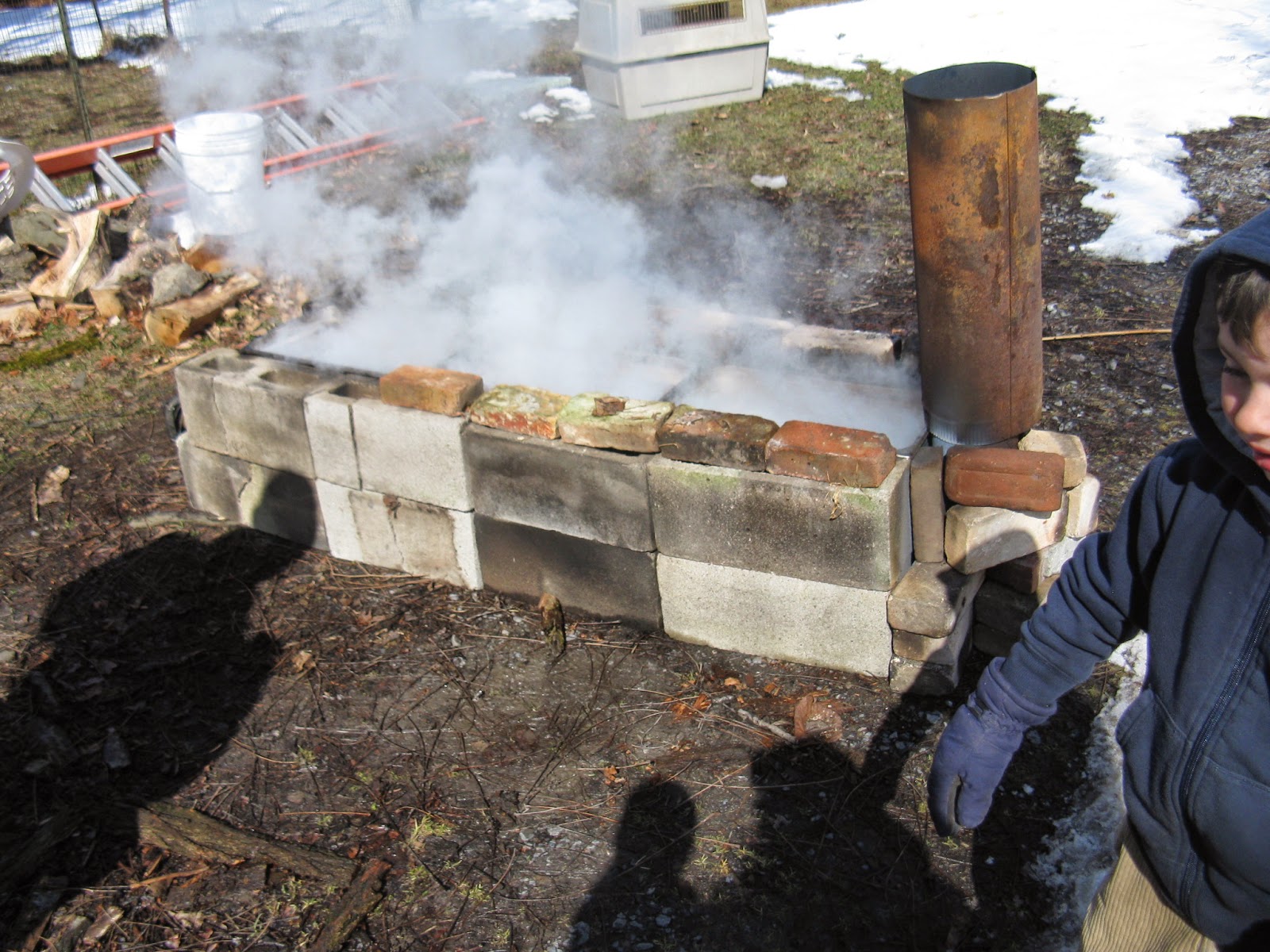 Sometimes the children stood there too, but since watching sap boil is about as exciting as watching paint dry, they mostly ran around fighting over sticks or whatever. Fun for all.

The MiL spent the weekend sneaking poultry into the cellar. 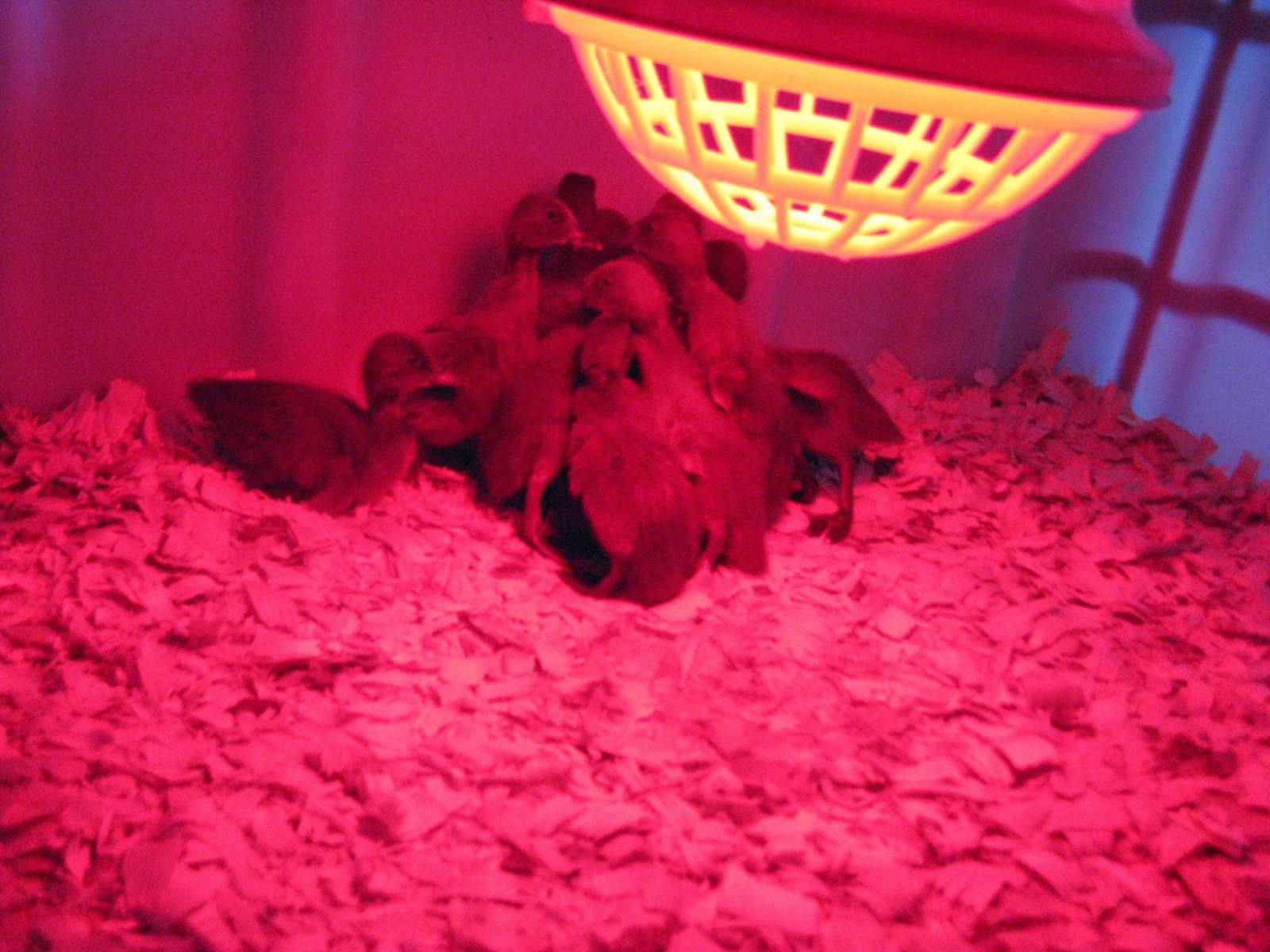 Okay, not all weekend. Just Saturday. She went into the Small City to run errands and when she got home started ferrying things into the cellar. Like a big bale of wood shavings. And the heat lamps. Cubby helped her get it all set up and then came running into the living room to announce to a wailing Charlie (due to post-nap trauma), "Charlie, there's a BIG SURPRISE in the cellar!"

A big surprise, indeed, in the form of a dozen Khaki Campbell ducklings. Not sure of their eventual purpose (although extra males never last long around here, since we, uh, eat them), but A. is already happily plotting dams and ponds in the hollow and the MiL is planning all the custards she can make with duck eggs. And, of course, maple syrup.

So that was our weekend. How was yours?
Posted by Kristin @ Going Country at 10:15 AM 2 comments: