Long version: A. took Cubby and Charlie scouting for the elk hunt Cubby drew for December. The mountain he drew is over three hours away, so they were camping and I threw together a bunch of random food for them.

They had a couple of leftover pork chops, cheese, salami, bread, peanut butter, canned sardines, crackers, apples, cherries, carrot sticks and raw green beans, and cookies. I have no idea what of that they ate for dinner and what they ate the next day for breakfast and lunch, but almost all of it did get eaten at some point. 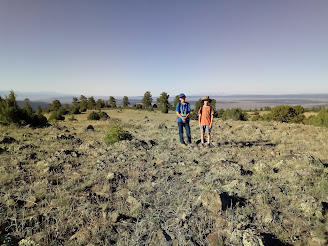 At the top of the 9,400-foot mountain they climbed. 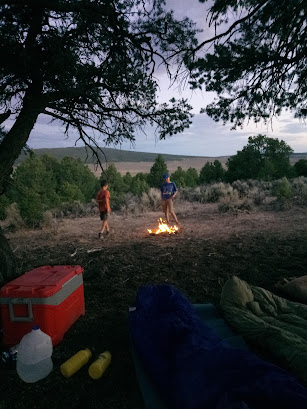 And at their camp near the car. A. has given up using tents, preferring the simplicity of al fresco camping.

I made chocolate chip pancakes for the children remaining at home, so they could feel they were having fun too, even if they were just sitting at home with boring old Mom. They spent the afternoon grazing in the garden on tomatoes, green beans, and thinned carrots, so I figured their vegetal needs were met.

Long version: For the return of the campers, I cooked all the remaining steaks my parents sent us for our anniversary. It was a lot of steak, but there wasn't all that much left over.

I didn't have any steak sauce left, so instead I made some garlic butter by mixing one clove raw garlic and the remains of some roasted garlic into soft butter, and then a few minced basil leaves as well.

You know how food people like to go on about how it's the little extras that make food extraordinary? I hate to admit it, but they're right. That butter made the steaks way better than you would think. Which is annoying, because it's those little things that are often just that much too much for me when I'm trying to get dinner on the table night after night for six people.

It's delicious when I do make the effort, though.

I just love it when I can harvest multiple vegetables from the garden for dinner.

Long version: School is starting for us next week, so I was busy all this Monday doing various required teacher trainings. While I was busy, Cubby decided it was an excellent opportunity to bake cookies. He found a recipe in my old Better Homes and Gardens cookbook for oatmeal/peanut butter/chocolate chip cookies.

"I didn't realize the recipe is supposed to make 60 cookies," he said ingenuously when he was telling me about his baking adventure.

Break for a random photo of the backyard garden: 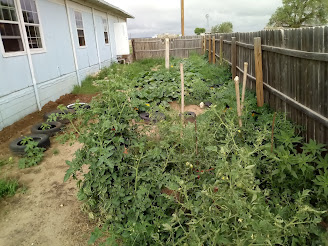 I did use the cheap ground beef from the chub for this, though. All I did was brown the meat, cook some onions in there, then simmer that with barbecue sauce. My mother used to do this, and we called them sloppy joes, but I'm not sure barbecue sauce is usually used in sloppy joes.

Doesn't matter. It was easy, and fast, and all of the children liked it. Win.

Short version: Tuna salad for kids, leftovers for A., randomness for me

Long version: The kids ate their tuna salad with crackers and some frozen green beans. The green beans were still frozen, and I just threw them right on top of their bowls of tuna with a few crackers. Gourmet, without a doubt.

I made myself a couple of pieces of bacon with sauteed calabacita, onion, garlic, tomato, and melted cheese. And thus were we all fed.

The tomatoes are starting: 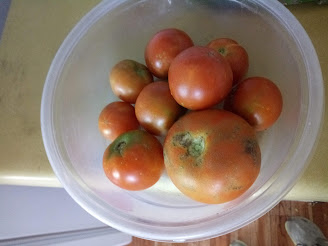 We're not at crazy levels yet, but I eagerly anticipate that in a few weeks.
The preserving is starting: 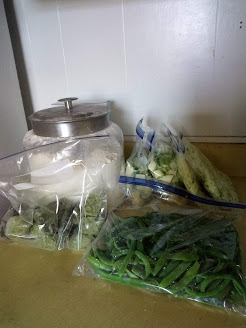 Green beans, basil pesto, and both diced and shredded calabacita (which can be used just like zucchini), all destined for the freezer.
And the third round of lettuce harvesting is starting. The commercial variety A. got--Grand Rapids--has proven to be a trooper in our hot sun.
It's the most wonderful time of the year . . .
Posted by Kristin @ Going Country at 10:57 AM 3 comments:

Poppy recently discovered the bag of dress-up clothes and jewelry my mother left here last time she visited. I had hidden the bag in my closet, intending to save it for a literal rainy (or snowy) day, when indoor distractions are more necessary.

She found it*, though, and I can't be too annoyed, because just look at this: 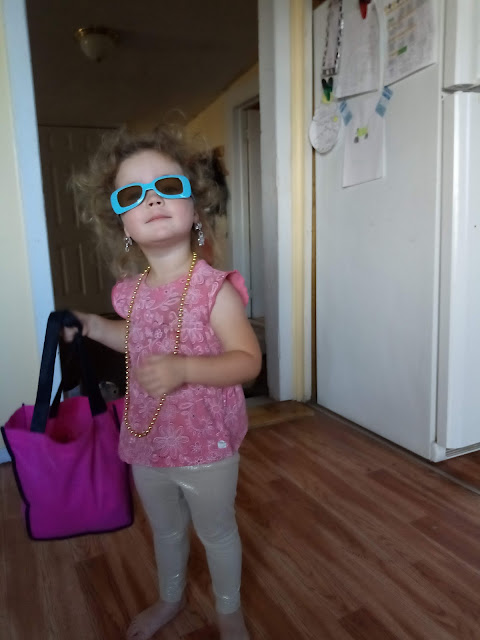 She also brushed her own hair just before this, which is why it has so much, ahem, volume.
(Sparkly pants courtesy of my sister-in-law, who sent some of my niece's outgrown things and this pair of pants immediately became the favorites here.) 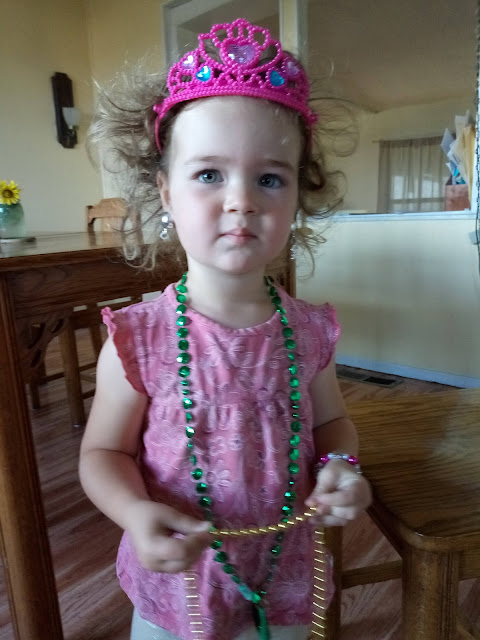 She actually decided she doesn't like the tiaras, so I might have to wear those myself.
This girl has zero examples of ultra-feminine style. I certainly don't fill that roll, and the only other inhabitants of this household are bucks. If you'll pardon the woodchuck expression.
So I guess this great desire for sparkly things is just hardwired.
And also hilarious.
* She found it because I had to clear everything out of the closet to investigate the mouse scurryings we were hearing at four in the morning. Which is when I discovered the little cache of nuts the rodent had stolen from the pantry and secreted away in between the folds of a blanket. GROOOOOOSSSSSS.
Posted by Kristin @ Going Country at 6:07 AM 8 comments:

Despite some efforts at planting flowers, I have mostly been unsuccessful thus far in growing anything decorative on this property. Luckily for me and my desire to have flowers on tables, however, there are wild sunflowers growing all along the ditches on our road. I have taken to bringing a few of those inside to put in the old milk bottle that serves as my very fancy vase on the table.

A couple of days ago, I realized that the sun comes in through the kitchen window at just the right angle at about 7:15 every evening to do this: 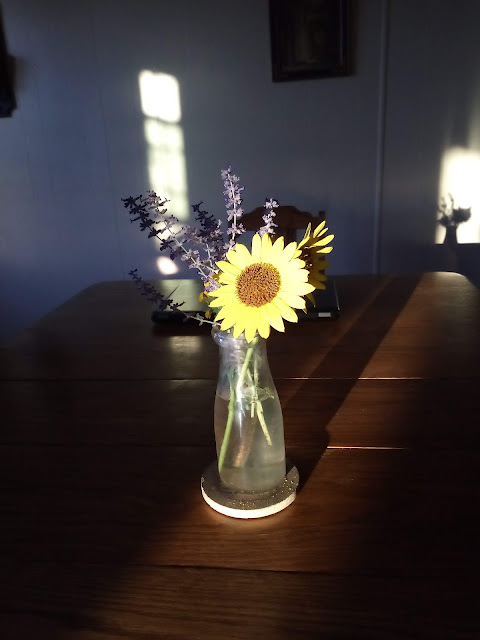 Spotlight on the sunflowers (and the ornamental sage).

It reminded me of this. Naturally spotlighted flowers are apparently a theme for me.

I also just realized that today is Sunday. I find all this much more entertaining than is probably warranted.