Long version: We took our Outside World oddysey this day and didn't get home until five p.m. Thus, leftovers. And fried eggs and cucumbers to fill in the leftovers. Not exciting, but it got the job done.

Long version: SAUSAAAAGE! I was SO excited to find some likely-looking sausage at the store on Friday. The lack of good sausage has been one disappointing thing about New Mexico. I found two packages of "German-style" sausage way in the back of a freezer case, hidden behind the jalapeno and cheese sausage (gross). This sausage is made in Texas and it had absolutely no sketchy ingredients in it. Not even nitrates.

I was really looking forward to eating it. Everyone else was very excited, too. And everyone loved it. Except me.

I thought it was far too salty. But I was the only one who did, so at least I found some sausage for everyone else. And it would be fine as a flavoring agent for a salad or something for me; I just couldn't take the salt by itself.

It's hard being so high-maintenance sometimes.

Long version: I had about half a dozen lemons in the crisper drawer that were getting far too elderly, so I juiced them all. I ended up with exactly enough juice to make a double batch of this pudding for our Sunday dessert.

Charlie happened to wander into the kitchen just as I was starting to make it, so I asked him if he would like to help me. He said he would, and then regretted it as he spent ten minutes stirring the pudding on the stove. His comment on this? "When I'm a grown-up, I'm going to find a wife who will make pudding for me, because this isn't worth it. Except for the taste."

That is true with most pudding, but not this pudding. It had an odd, chalky texture and taste, as if there was too much cornstarch in it maybe? I dunno. Only A. and Charlie liked it, which was a bummer given how much I made.

Long version: While we were on our way home on the school bus--en famille, as we always are on Mondays and Wednesday--Cubby asked me what was for dinner. I told him scrambled eggs and bacon. And you know what he said? He said, "Why can't we have something more dinner worthy?"

I'm not still irritated about this. Not at all.*

Long version: Way back in September, when I harvested the final batch of basil to make pesto, Charlie told me I should freeze it so we could have it in the winter.

I did, and Tuesday was the first time I used some of the pesto for the children's pasta. They were very happy. And it was an excellent way to get them to eat elk, because they will finish anything on their plate to get seconds of pasta.

In other news, the baby is learning to fly a plane: 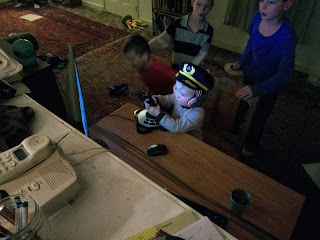 It's gonna be a bumpy ride.

Long version: Pizza grilled cheese is just grilled cheese sandwiches with mozzarella and pizza sauce. I used the rest of the sauce from making the pizza elk.

I had made the vegetable soup for lunch the day before, so that just had to be heated up.

Charlie, who does not enjoy either novelty grilled cheese or soup, had a regular grilled cheese sandwich with cheddar, raw tomatoes, and the last of some applesauce with cream.

And there were no comments about the dinner-worthiness of this meal.

Okay, yes. I am still irritated about that.

All I did was marinate some small chunks of elk in olive oil, vinegar, salt, and garlic, then seared them and let the kids eat them with ketchup. It was fine.

* Yes, of course I explained that I had been working all day and I was tired and he was lucky I was cooking anything for him. This made exactly no impression, because he is a child and children are ingrates.

I Fear for the Infant Lettuce


It is zero degrees at my house right now.

I may have to start over with the lettuce.

P.S. This should have been a tweet, right? Except I have never had a Twitter account, and so you get my short 'n' useless updates right here on my Very Serious Blog. Lucky you.


Yesterday it was 62 degrees with some sun. Okay, so it was windy, too, but it's almost always windy here and still! Sixty-two degrees! At the beginning of February!

Our high temperature today, however . . . well, that's supposed to be 22 degrees. The wind is still blowing madly, AND there's snow out there.

And our low tonight? Six. That's it. Just six. No digit in front of or behind that six.

My poor baby lettuces will need to be covered with a blankie (not a joke--I literally cover the frames with old bedding), and we'll all just have to ride it out until sixty degrees returns again.

How's the weather where you are?