BYOV = "Bring Your Own Vegetables."

Long version: I always make pizza when we have guests. I'm famous for it (in my head, anyway.) It is exceptional pizza. Not that I'm in any way biased. 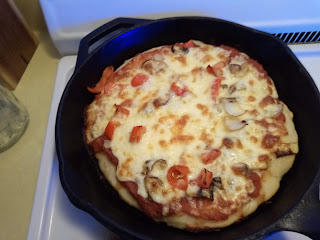 I made one cheese pizza; one with mushrooms, bell pepper, and onions; and a salad with the grape tomatoes that I asked my sister to bring with her (along with quite a bit of other produce) when she drove to our house from the airport in Albuquerque. Because when you're a houseguest a hundred miles from anywhere, you bring your own tomatoes with you.

Long version: Carnitas are supposed to be chunked-up pork simmered in water until tender, then the water simmered away until only the fat remains to fry the meat in.

I have a great aversion to cutting up raw pork, and anyway, my pork roast had a bone in it.

So instead I cooked the pork slowly in my Dutch oven in the, um, oven (with nothing but salt and a very small amount of water to prevent scorching), then poured off the fat and juices, pulled the meat off the bone and into chunks, and fried the chunks in the fat I skimmed off the poured-off stuff.

It was really good. Even if I did forget to cut up one of the avocados that my sister also brought with her.

The children also had an appetizer of frozen peas. What can I say? It makes them happy and keeps them quiet for five minutes. Who am I to argue with that?

Long version: One of my sister's favorite foods is steak. Well! Did she come to the right house or what?

So we had steak.

I roasted the potatoes in some more of the duck fat that I continue to work on using up. And the broccoli was, of course, also something she brought with her.

I made pudding again because I had to go on Saturday to pick up my usual two gallons of milk from the people up the road that have Jersey cows, but I still had quite a bit of milk left due to A. being gone and not drinking it. And I needed to empty and wash the half-gallon Mason jars it comes in so I could bring them back. So I made a double batch of this chocolate pudding Saturday morning.

The taste was perfect, but it was too thin. I mean, no one refused it, but pudding shouldn't really be drinkable. Maybe it was because it was a double batch. Or maybe because I didn't have enough chocolate chips and had to substitute cocoa powder, sugar, and butter for half the chocolate chips. Or maybe I just didn't cook it long enough.

I will make it again, though. It had a very strong chocolate flavor, which is exactly how I like chocolate pudding. Pudding cups don't even come close. They're a weird gray-brown color. This looked just like melted chocolate. 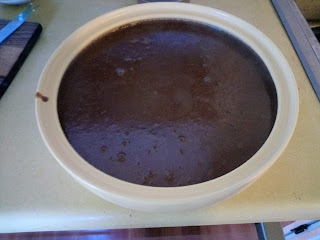 Chocolate brown, as God intended chocolate pudding to be. No gray.

Long version: My sister left this day and A. was supposed to come home from his trip to New York. She did; he didn't. His flight was canceled, thanks to all those 737s being grounded.

So we had leftovers.

I heated up the remainder of the carnitas pork in a cast iron skillet. It must be re-heated in a skillet, or it's not good.

Charlie, Jack, and Poppy had tortillas and cheese with the pork. Cubby had that plus some of the rice and vegetable soup I made with the remainder of Miss Amelia's chicken rice.

I had diced avocado, tomatoes, and pork with a little balsamic vinegar. Tortillas and cheese not at all necessary.

Long version: When I made the meatballs the week before, I froze twenty plain, raw meatballs. A. wasn't going to be home for dinner again, so I just made a quick marinara sauce in the morning (lots of garlic sauteed in olive oil, one can of whole tomatoes mashed with the potato masher, the dregs of the bottle of red wine my sister and I finished, dried basil and oregano, bay leaf), poured it over the meatballs and baked them.

I was going to make pasta, but I was once again baking bread in the afternoon. Garlic bread it is, then.

Long version: Another 4:15 p.m. 4-H meeting, another chance for prepping dinner way ahead of time. I peeled and diced the potatoes in the afternoon and left them in the pot covered with water for A. to cook before we got home. I also left two ENORMOUS sirloin steaks that flopped over the edge of my griddle pan and kept causing flare-ups.

A. made the potatoes and started the steaks before we got home at 5:15 p.m., but I finished everything because he went back to the village to get the big bag of dishes and leftovers from the peanut butter cookies and vegetables and ranch dip I had brought for Official 4-H Snack. I left the bag next to the van in the parking lot and drove right off without it.

A. drove 20 miles roundtrip to retrieve it and didn't find it.

One of the other parents found it and left it by our door on her way home. And hey, at least it wasn't my wallet.

Long version: This is the first time I've ever made fajitas with the traditional skirt steak, and now I see why skirt steak is the preferred cut of beef for fajitas. So, so good. I marinated them in oil, lime juice, chili powder, cumin, a small amount of soy sauce, and salt. Yum.

And now I've gotten to the very end with no picture of the baby and no current picture to post. So let's have a blast from the very cheeky past. 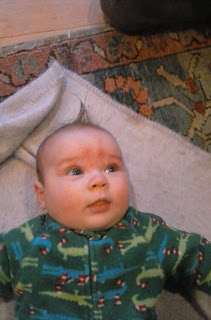 Hair by Cubby. Poor girl has been bugged by her brothers from the very beginning.


I've read a lot about what you might call the history of domestic work, and one thing that has always struck me is how much it sucked to wash clothes. Every history of women's work I have ever read has specifically outlined the incredible physical labor involved in a wash day. So much hauling of water and pouring it in and out of tubs and agitating and scrubbing and wringing and NO THANKS.

Then my washing machine stopped working and I got a very small partial taste of  hand-powered washing which did nothing to change my mind about how much it must have sucked.

See, on Tuesday when I opened up the washing machine to take the clothes out to hang up on the clothesline, they were still sopping wet. I quickly ascertained that the agitator and spin cycle weren't working.

I pulled the clothes out anyway, wrung them out as best I could outside, and hung them on the clothesline to drip and eventually get dry*.

Now. We do not live in a place where it is easy to A) get appliances repaired or B) buy new appliances.

I figured A. could probably fix this machine with the aid of YouTube tutorials. However, he didn't get home from New York until Tuesday night and has been trying to catch up with work ever since.

He brought a bunch of dirty clothes home with him, and the rest of us keep producing dirty clothes, too. And while the washing machine isn't operating all the way, it's still partially working. That is, it fills with water and drains by itself. All I needed to do was the agitating and wringing part.

Or rather, A. did. He's much stronger than I am, you see. So I put in a load of laundry, soaked it in warm water for awhile, and handed A. Cubby's Little League bat.

He used to bat to agitate the clothes and sort of lift them up and around in the water. Then I drained the water and re-filled it for another round with the baseball bat. I don't use soap anyway, so I wasn't required to do multiple rinsings to get rid of the soap. 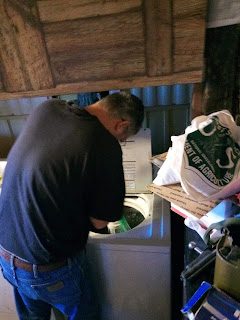 Who needs a machine agitator when you have a baseball bat?

After that, I just squeezed them out as best I could in the washer and hung them on the clothesline. They didn't get as clean as they would have if the machine had done it all--I probably should have done another rinse--and they certainly didn't get as dry, but they definitely got cleaner.

I did another load after this one by myself, which convinced me that I would have been a terrible pioneer woman. My hands were sore from the agitating and hand wringing, my sleeves were wet up to the elbow, and that was only one load. And I didn't have to haul, heat, or dump out any water.

A. promised me he would take the machine apart and look at it this weekend. Until then, if you need me, I'll be here doing my laundry with a baseball bat. Because that, my lovelies, is how this weird and wonderful life goes sometimes.

* I was once again grateful to have a good long clothesline as it meant I wasn't putting the sopping wet clothes in a clothes dryer to burn propane for the two hours it would have taken them to actually dry. Hooray for long clotheslines and excellent New Mexico drying weather.

Retreating To Simplicity. And Peanut Butter

I thought about making oatmeal raisin cookies, but as one of my own sons dislikes raisins in baked goods, I figured that was a no-go.

Also, they require the extra step of rolling them in cinnamon-sugar. I am not making cookies that require any extra steps. I can barely manage creaming butter and sugar without silently swearing.

I briefly looked at some random recipes online for just cinnamon cookies, but those all had an egg plus one yolk. Separating eggs and having a lone egg white in the refrigerator are a personal big "no, thanks" for just a cookie recipe. Or they were actually sugar cookies with a lot of cinnamon in them, and that is just a straight HELL NO.

All this clicking through online recipes was stressing me out, doubly so when the wifi was going on and off because A. was trying to fix our non-working Internet phone service*.

So I did what I should have done to start with and made the peanut butter cookies from my 1996 Better Homes and Gardens Cookbook.

Simple ingredients. A whole egg. No weird instructions. Almost certain to be loved by every child. And the oddly therapeutic task of pressing hatchmarks into the cookies with a fork.

Let this be a lesson to future me: Sometimes it's best just to close the computer and go with the tried and true.

* This is exactly why I was so disappointed that an old-school landline was not an option here. Nothing works like an actual wire straight into the phone. Also, this is like the fourth thing that is currently broken in our house right now, including my washing machine, but I'm not thinking about that right now LALALALALACOOKIES.