Long version: Happy New Year! Now, as you know if you've been reading here for longer than a year, I always, and I mean ALWAYS, make pork, greens, and black-eyed peas for New Year's Day dinner. How else can I ensure our health, wealth, and happiness in the coming year?

I have to admit that this year's effort was a bit lame. I forgot to put dried black-eyed peas on the list for A., so I didn't have a big pot of peas like I usually would. Luckily, I did have a can of black-eyed peas that came to us from the commodities program via a neighbor. So we did have at least some happiness.

I also didn't have very much in the way of greens, thanks to the brutal cold and wretched rabbits that have attacked the collard greens out in the garden. I did have some beet greens, though, so I made those.

The pork was some random cut I pulled out of the freezer and chunked up before frying with paprika and garlic powder.

And the seltzer was for our festive toast to the new year. I made it even more festive by putting a slice of actual lemon in each glass, AND by giving the children actual glasses with handles (which are actually jars that a Texas company sells jam in).

For my seltzer, I used a beer stein that my parents got for me in Germany years ago. I don't drink beer, so this seemed like a better use for it. The children were fascinated by it, though honestly I find it heavy and awkward. You can't see in the photo below, but it has one of those pewter covers on the top, and that just gets in the way.

Still! It was festive! 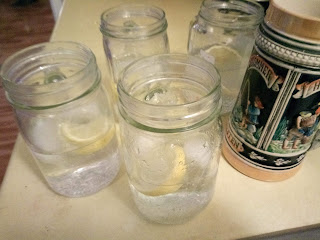 Long version: I had some more pork chunks from the day before that I had cut up, but it wasn't quite enough and I knew everyone would be very hungry after a long hike we took to see an ancient combine harvester that was abandoned a hundred years ago in the middle of nowhere. 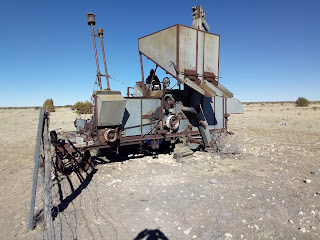 There are actually quite a few farm machines from long ago in the middle of the range here, because this area used to be used for dry-land wheat farming. Back when it actually rained, that is, before the Dust Bowl.

Anyway, I took out one of those half gallon jars of pressure canned bull meat instead. I thought one of those jars would be enough for two meals.

How foolishly optimistic of me. Half a gallon of meat is ONE meal for us.

The artichoke was one that A. bought in Taos for me. I love artichokes and haven't had one in years. Pretty much everything I have ever seen in the food world about preparing artichokes involves trimming the leaves with shears. My mother never did that, so I don't, either. Anyway, half the fun is scraping the leaves with your teeth.

Just ask my children. I shared the artichoke with them. They've never had one, so I had to demonstrate the proper technique for removing the leaves, dipping them in the olive oil and vinegar mixture (also what my mother always did), and teeth scraping.

They loved it. Of course.

Long version: This was a really large meal that came out well, but I feel like there's not too much to say about it.

Oh! EXCEPT! (I always have something to say, right?)

Those roasted tomatoes? Those were the VERY LAST fresh tomatoes from the garden. The ones that were harvested way back in October. "Fresh" was pretty relative by this point, because they had gotten kind of wrinkly and mummifed, but they were delicious roasted. 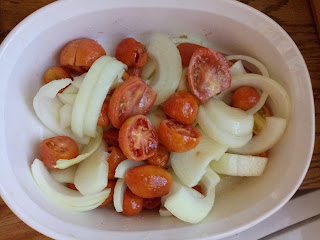 Only six more months until we have fresh tomatoes again. (Sigh.)
Monday
Short version: Pork with sauerkraut and onions, chicken with curry dip, rice, carrot sticks, sauteed green beans
Long version: I really needed to cook those pork pieces I had cut up on Friday, but it still wasn't quite enough for dinner for all six of us.
How lucky one of our hens drowned in the horse water!
Yeah, not really. She was just starting to lay. Boo.
Despite the bummer of losing a laying hen, we certainly weren't going to let her go to waste. So A. hung her overnight and then prepped her in the afternoon for me.
This hen was not all that large, but she was incredibly fat. I guess because she had been eating grain all winter and hadn't starting depleting her reserves by laying yet. This was the first time I've ever had a home chicken with enough fat on it to render, but that's what I did.
I ended up with about a cup of rendered chicken fat, which, FYI, is a startingly bright yellow.
The actual chicken I boiled, except I didn't get it in the water until mid-afternoon, so by dinnertime it was still very tough. The breast was okay, though, so I cut that off for the children and gave them some dip for that while I continued to boil the rest of the carcass.
And then we had the pork, cooked with a jar of rinsed sauerkraut and some sliced onions. It was a bit dry, so I added some butter, too. Yum.

Long version: I took out another of those enormous rolls of ground beef from the freezer and made the whole thing into hamburger patties. We ate some this night, and then I froze about 25 more.

I guess that's one good thing about those awkward quantities of meat: It forces me to prep ahead. 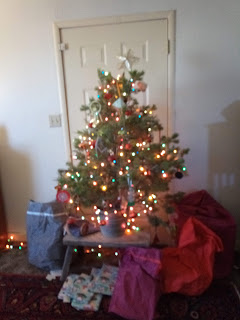 The small but mighty tree, still standing proud.
The pasta with pesto was our celebratory food. It has nothing to do with the Three Kings, but my children sure like it.
I haven't managed to grow enough basil here to make pesto an everyday food in the winter, but it's good to have for special occasions.
Thursday
Short version: Pork, leftover rice, baked onions, mashed squash, green salad with ranch dressing
Long version: I don't know what this pork was. Another random thing I cut off something larger. It was pretty lean, so I'm guessing a loin. In any case, I cooked it in the oven for several hours until it was tender. It didn't make enough fat to fry it in, though, so I used some of the rendered chicken fat to fry it carnitas-style.
The onions were sliced and baked at the same time as the pork, as was the squash. Only one squash left to cook! And a LOT of bags of cooked squash in the freezer.
Okay, your turn! What'd you eat this week?
Posted by Kristin @ Going Country at 4:35 AM 5 comments:

Tuesday Tips: File Away for Next Year

This one is for my fellow parents out there. It's a tip for Christmas, which means it won't do you much good this year, but maybe it will be helpful next year.
So! Let's talk about presents.
If your children are anything like mine, they are the recipients of many gifts from generous family members. The packages pile up in the weeks before Christmas and when you sort through them, you realize there are a LOT of presents for each child.
This is a good problem to have, but I do consider it a problem. And the reason I consider it a problem is because the more presents kids have, the more they want. Christmas morning becomes a sprint to see who can open their gifts the fastest, with a constant stream of "Are there any more for me?" while the presents they've already opened get tossed aside with hardly a glance in their quest for moremoremore. 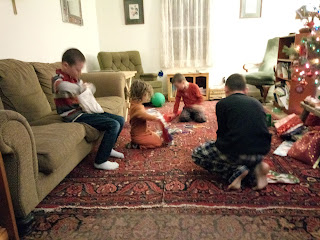 The beginnings of Christmas madness.
It's highly unappealing, and not really the Christmas atmosphere I'm going for.
So, my solution to this is to not give them all their gifts on Christmas.
One year in northern New York we did a New Year's Day Christmas at home after spending Christmas Day with the MiL and her family. That was great, because by the time New Year's came around, the kids were ready to appreciate new things.
This year, I saw someone mention online that their children actually open the majority of their gifts on Epiphany, and I was like, "Dingdingding! We have a winner!"
Epiphany is also known as Three Kings Day. It's the Twelfth Day of Christmas (as in the famous song of the twelve days), and it is a celebration of both Jesus' baptism and the Magi's visit to the newborn Jesus in Bethlehem with their well-known gifts.
I mean, it's the day that Jesus got his gifts! How appropriate.
So I set aside a couple of presents for each kid for Epiphany. They know they will get something on Epiphany, which makes them excited all over again, rather than let down that all the excitement is over.
You could also do some gifts on Christmas Eve and the rest on Christmas Day, but I think a longer period in between is better.
However you split it up, it will lessen the chaos on the actual day of Christmas and hopefully result in kids that appreciate what they get a little more.
One caveat here: This should not become an expectation that you or family members will buy more gifts for the additional gift-opening day. That kind of defeats the point. It's just an opportunity to split up what you already have and spread out the fun.
Posted by Kristin @ Going Country at 4:30 AM 8 comments: 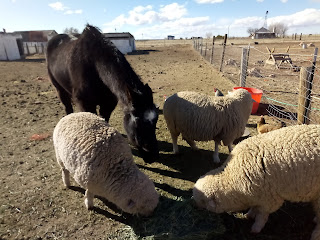 Jockeying for the hay. 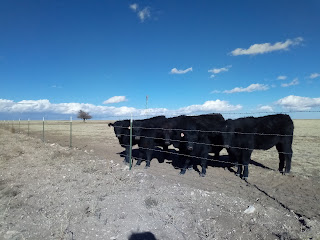 These are our neighbor's cows that are overwintering in the pasture across the road. You know that line in "Away in a Manger," "The cattle are lowing, the baby awakes"? I know why the baby awakes. Because lowing cattle are SO LOUD. And I know this because that's what these cows do first thing in the morning when they see anyone come out of our house to feed our animals. It's really annoying. 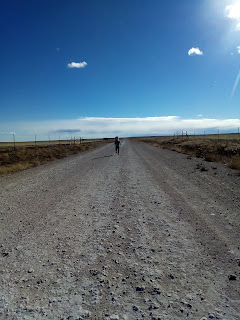 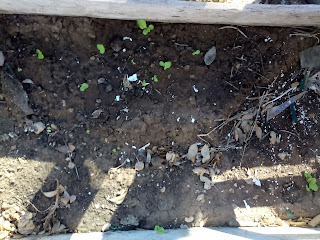 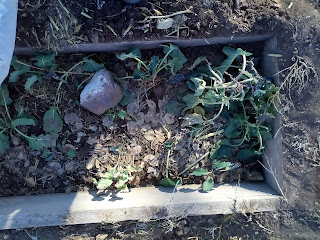 And some sad-looking collards and sprouting broccoli plants. 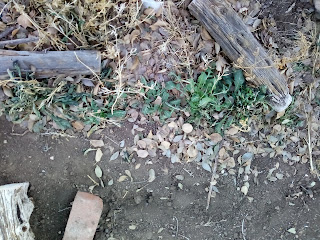 And some arugula from last summer that is apparently indestructible.
Posted by Kristin @ Going Country at 4:30 AM 2 comments: