Falling Far From the Tree

Although I feel as if I spend most of my day picking things up, putting things away, and cleaning, the truth is that I am not by nature a tidy person. Clutter drives me a bit mental, and I always appreciate an orderly room, but achieving that state myself requires self-discipline that frankly, I usually do not muster as often as I should.

Which is why today's little tidying episode with Cubby was a little surprising.

I had sent him upstairs to his room for a timeout after he went too far menacing Charlie with a wooden snake (this one, as a matter of fact). A few minutes later, when I called up to him that he could come back downstairs, he replied, "I'm making Charlie's bed."

A few minutes after that, he still hadn't appeared, so we went in search of him. We found him still in his room, folding his pajamas and placing them carefully on his corner of the bench between his and Charlie's beds. Then he lined his slippers up neatly by his bed. He explained that he was tidying up, because he likes a nice, neat room, and wasn't I glad that he decided to pick up his room?

Why, yes. You could say that, Cubby.

I don't know if this interest in tidying will last, but I will not complain if it does. Even if it does mean that I have to listen to lectures about how I need to organize things better.
Posted by Kristin @ Going Country at 11:35 AM 5 comments:

Labels: all about me, Cubby, domesticity

Reaping What He Sowed

A few months ago, when I was busy inside, Cubby came in and announced that he had planted a garden.

Turns out he had found a packet of pea seeds in the catch-all container on the mantel and planted them. But not in the actual garden. His garden was to be in the patch of bare dirt where A. used to always park his truck.

I didn't have high hopes for this venture, and I didn't want him to be disappointed. So I cautioned him that I had no idea how old those seeds were, so they might not even germinate.

A couple of weeks later, they germinated.

Then I cautioned him that peas are really a cool-weather crop, so they might not grow very well in hot, dry weather.

So he watered them faithfully, and they grew. 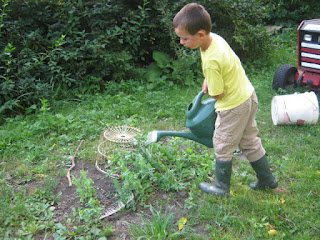 He decided they needed compost and took the very top layer from the compost pile, resulting in a collection of whole egg shells and banana peels around his peas. So I showed him where the well-rotted compost was and he carried buckets of it to his peas and spread it around.

He even weeded regularly. Basically, he was the only one in the house who properly cared for a garden this summer.

And he has peas. Every morning, he goes out and picks three or four pea pods and proceeds to eat them all whole. They're supposed to be shelling peas, but he insists he likes the pods, too.

Whatever you say, Cubby. It's your show.

I Came, I Sauced, I Conquered 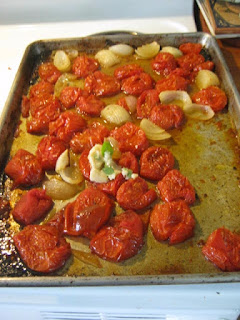 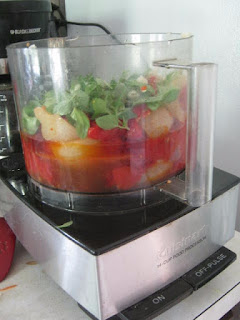 Plus a large bowl of fresh salsa last night for our carnitas, and I'm left with six quarts of Finny's sauce, two quarts of tomato soup, and this . . . 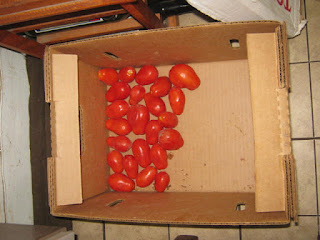 All hail the tomato-conquering hero(ine).

Labels: all about me, fun with food
Newer Posts Older Posts Home
Subscribe to: Posts (Atom)