Ever since the recovery of the beached boat a couple of weeks ago, Cubby has been agitating for A. to fix the boat so he could use it. I think his desire was fueled by his repeated viewing of the film The Swiss Family Robinson and a grand scheme to explore in a boat to uncharted territory. He had plans for auxiliary craft towed alongside his boat that would carry his ammo and other supplies.

I'm not sure what the other supplies were exactly, but he was very clear he would need ammo. Sounds safe.

A. declined to fix the old boat, but he did promise Cubby he would build a new one for him and Charlie. Last weekend, he did. Pretty much just like that. This is the fourth boat he's built, and he learned a lot from his first few attempts, so this one went pretty fast. Also, it was for little kids, so it was small.

After a couple of coats of paint finally dried, we brought it down to the beach tonight for its maiden voyage. 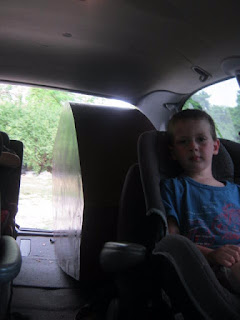 Minivans really can haul anything.

We suited the kids up in their life vests, A. found a couple of random paddles, and out they went. 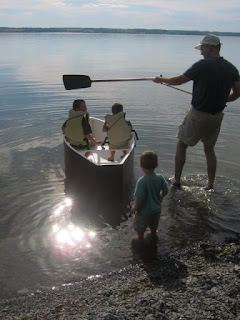 Jack was obviously left on shore. Much to his displeasure.

Not only did the boat float with ease, but Cubby very quickly picked up the knack of paddling on either side to direct it around so they weren't just drifting off to the south end of the lake. 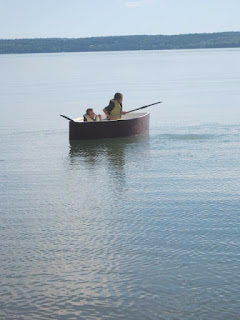 Charlie was relegated to passenger, as his attempts at paddling were less than helpful.

A. gave them a bucket of dried corn to throw out into the water, because Mr. Jason is coming for another carp derby on Monday and chumming* is crucial to carp success.

That's what I hear, anyway. My knowledge of (and interest in) such things is very limited.

Then A. decided to see how much weight the boat could take. 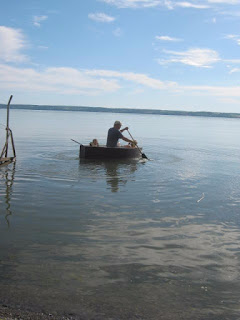 A lot. What a brave little boat. 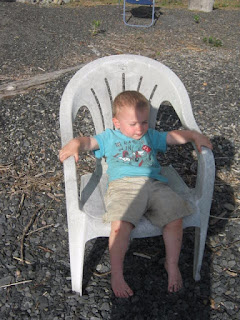 Sucks being a toddler sometimes.

But then the captain and his mate decided they'd had enough of the boat and would rather swim, so we hauled it up on shore. 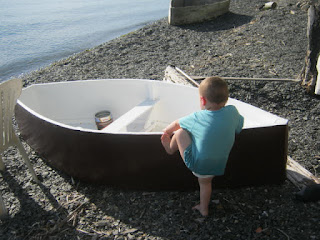 He needed a little help scaling the walls . . . 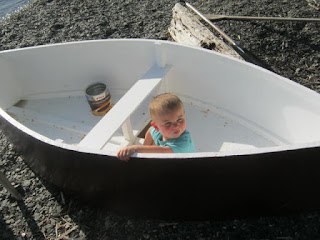 But at last, he reached Big Boy Territory.

And then I pulled Jack out and brought him up to bed, leaving A. sweating in the blazing sun on the beach while the other two swim. But at least while he's basking in the sun, A. can also bask in the satisfaction of building a successful boat for his boys. Father of the Year, for sure.

* Chumming is just throwing out little bits of food to get the fish used to coming to a certain spot for food, so they'll be there when you start fishing.

Although a generally cheery and good-natured toddler, Jack has one situation in which he completely melts down: medical establishments. As soon as he senses a needle in the vicinity he starts thrashing and screaming his head off.

It's because he's had to have blood drawn several times for lead testing, and a couple of times the technicians were . . . less than skillful. I would scream too if someone was jamming a needle in my arm over and over and leaving a bruise as big as a quarter. And I probably wouldn't forget it anytime soon either, just like Jack.

Like today's visit, for instance, which was just a routine check-up. As soon as the nurse came into the exam room, Jack started shrieking and trying to dive off my lap. She hadn't even touched him yet. After she did the measurements and left, I managed to calm him down, but then the doctor walked in. Same shrieking and struggling. And then again when the nurse came back for a vaccination.

Oh well. At least I know there's nothing wrong with his memory.