All in the Timing

Good news! Cubby has gotten over whatever sulkiness resulted in his refusal to go outside. Bad news! He wants to be outside CONSTANTLY. Come rain or snow or gloom of night.

I think he's in training to be a mailman.

So when Cubby (predictably) asked to go outside at 8:30 this morning, I was not surprised. I was, however, reluctant. To say the least. It was 29 degrees with a thirty-mile-an-hour wind. And snow. So I said we weren't going to play outside this morning. Maybe after his nap.

But I had a distraction planned! It was a sure thing! He would love it!

That was him transforming into a hyper-aggressive cat that goes around "catching mice," which is really just a euphemism for "run around maniacally shrieking MEOW and scratching the floor." The cat also tried to catch  me--the Mommy Mouse--this morning, before I put a stop to that particular variation on this not very pleasant game.

Fast-forward two (LOOONG) hours. By 10:45 a.m., Charlie was down for his second nap of the day and Cubby was almost ready for his nap. So he was calmer. And more agreeable to mundane gardening tasks that do not involve shrieking and menacing.

First he helped me moisten the soil: 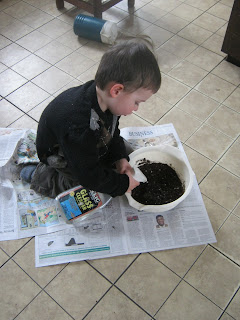 Spray bottles are about the most popular small-person toy ever, FYI. 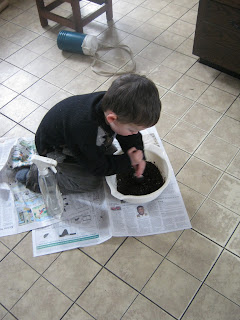 Dirt of any kind is also a hit.

And carefully spooning the soil into the small cells: 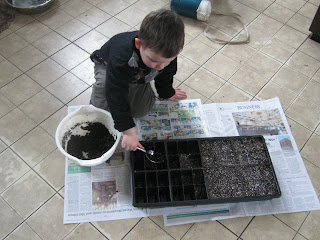 He also helped me drop the seeds into the cells, but I don't have a picture of that because I was too busy down there with him making sure the tiny seeds actually made it to their intended destination. And then he spooned some more soil on top and we were done.

He asked to help plant tomato seeds after his nap. It's snowing again. I think that could be arranged.
Posted by Kristin @ Going Country at 10:58 AM 1 comment:

As Inevitable as Taxes

And just as much of a relief to get done. 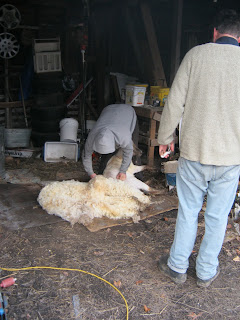 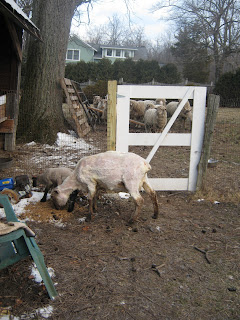 And one chilly sheep.

Yes, the shearer arrived this morning to divest our small flock of their wool. The usual rodeo of sheep-catching ensued, made easier this time by blocking off part of the dog pen with a livestock gate. But still difficult thanks to the not-quite-yearling ewes that are small and agile and much faster than A.

One of these days I should really record a video of sheep-catching. It's pretty amusing. If you're not the one having to do it, that is.

They were all caught in the end, though, and led to their destiny with the shears. Too bad it was 34 degrees today with a nasty wind. I bet they were cursing us for taking away their toasty wool.

Oh well. That's done for the year. And hey! So is lambing! It occurs to me that I never mentioned that.

Our final lamb count is five: Four males and one lone female. The last lamb born is the miracle lamb. It was born without an anus.

Yup, that's what I said. This is unusual, though not unheard of. It's almost always fatal, since the lamb obviously can't, uh, relieve itself. But if the deformity isn't too severe internally, the lamb can sometimes be saved by surgery. That is, literally cutting a hole. In the back end. For, uh, pooping.

Yes, it's all very unpleasant to talk about. I imagine it was even more unpleasant to do, but since the lamb would have certainly died without intervention, A. figured he had nothing to lose and so performed his first sheep surgery.

Much to everyone's surprise, including A.'s, the lamb not only survived (this was a few weeks ago now), but is thriving.

And that's your sheep update. Over and out.
Posted by Kristin @ Going Country at 6:42 PM 6 comments:

When I was in college, one of my roommates at the house I lived in for a year mentioned that her mother didn't always flush her toilet. Not, obviously, when there were, uh, solids involved. But for the other stuff? Not every time, because she didn't want to waste water.

A laudable goal, especially considering the mother lived in Phoenix. As in, pure desert area. As in, a place there is not so much water and you really should limit your impact on the local supply*.

But I, being a typical insufferable 22-year-old, said something to the effect of, "That's gross."

I may have even said those exact words. Ever polite, that was me.

And now? Now I don't flush either.

Well, not NEVER, obviously. But not that often. Again, when solids are involved, those get immediate disposal, but pee? Eh. Whenever it starts to look too yellow.

Oh, 22-year-old me. You had no idea what you would become.

And now it's time for you to weigh in on this potentially divisive topic, duckies! Are you an occasional flusher, or is the very idea of skipping a flush enough to make you gag?

* Although most people living in Phoenix probably use more water than anyone, thanks to the CAP water and the fact that everything has to BE watered to survive. But that's a topic for another place.
Posted by Kristin @ Going Country at 5:55 PM 12 comments:

The brisket I corned myself was way, WAY better than a store-bought corned beef. Typical. Store food really does suck.

Basically, it tasted like beef with nice seasoning, rather than a chemical salt lick. Which means now I will be stuck having to brine my own corned beef forever more*.

Brining our own whole brisket also means that I have a LOT of leftovers. This makes me very happy, because there are few leftovers better than those from a full corned beef dinner. I particularly love the potatoes, which soak up all the yummy flavor and so are basically pre-seasoned.

It also occurs to me that I still have a couple of jars of sauerkraut in the Pit of Despair. You know what that means, don't you? The best Reuben sandwich EVER is within my grasp. I just have to get some Swiss cheese. And make some Thousand Island dressing (essentially mayonnaise, ketchup, and bread and butter pickles, all of which I have on hand). And do those things before we eat all the corned beef up.

I may not manage it. But then I would have an excuse to make another corned beef. I can handle that.

* For Haley, who asked: Nope, I didn't use the sodium nitrite to preserve the red color. Mostly because I didn't care if it was red and I wasn't about to hunt down a special ingredient for a one-time thing. It didn't turn out a nasty gray as I'd expected; it just looked brown, like any braised meat. A. said he kind of wished it was red, but I couldn't care less.
Posted by Kristin @ Going Country at 10:18 AM 6 comments: