In Lieu of Air Conditioning

If you have no air conditioning and experience two days of temperatures well into the 90s with humidity that results in a "Real Feel" of 100 degrees, it really helps to have a lake.  With private beach, if possible.  And a dock. 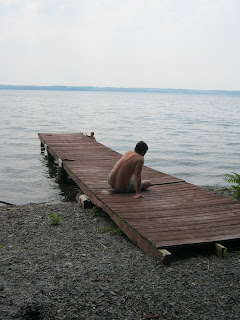 That little speck at the end of the dock is Cubby, of course, with a watchful A. in the foreground.

You'll just have to imagine me floating in the water there near the dock, which is exactly what I did for an hour or so both days.  Our particular spot on the lake is nice because the depth is no more than a couple of feet for quite a distance out, so Cubby can walk around without fear.  Though he still prefers to have a hand on the dock at all times.

Too bad I couldn't sleep in the lake, because nothing was going to result in sleep when the bedroom was 90 degrees.  I'm really, really tired now.  But tonight is supposed to be much better, so I have great hopes of a good night's sleep.  Well, as good as it gets when eight months pregnant.

Oh, and an update on the Great Ice Cream Disappointment.  I called Perry's (which is a very nice, family-run business located in upstate New York) and told them of my cookie-less Cookies and Cream.  A coupon for a free container of ice cream is even now on its way to me.  Which I will, of course, use for White Lightning, NOT Cookies and Cream, because that wasn't even what I wanted in the first place.

But the heat advisory is over now, so the need for ice cream (and the lake) is not so urgent.
Posted by Kristin @ Going Country at 5:39 PM 4 comments:

Labels: all about me, Blackrock, Cubby, family, the A team, weather

Awhile ago when I was at the grocery store, I bought some chalk for Cubby.  We have a lot of stone and concrete patios and walkways around the house, so I figured he could draw to his heart's content outside.  That way I get to sit still for a five-minute stretch and he gets to draw without constant admonitions from me that crayons/pens/pencils are only for use on the paper.  No, Cubby, not that paper; that's a book.  That's a magazine.  Those are Grandma's work papers.  THIS PAPER HERE.  ONLY THIS.

It's not good for the budding artist within, I'm sure.  So freedom to create via chalk. Sounds good to me.  Except he doesn't really want to draw by himself, mostly because he, uh, can't.  Like, at all.  Instead he hands me the chalk and makes a series of increasingly difficult demands for drawings, using the incorrect pronoun because he does that.

So it goes like this:  "I draw boats."  Meaning "YOU draw a boat, Mommy." And I draw a really pathetic-looking boat, because I cannot, in actual fact, draw worth a damn.  Then he continues with, "I draw propeller on boat."  And I draw something that kind of resembles a propeller if you squint and ingest large quantities of alcohol before viewing.  "I draw steering wheel."  Okay, that I can manage.

Right.  I don't even know what a motor actually looks like or what might be in it, much less have any confidence in my ability to reproduce it with a piece of chalk.  At about that time I tell him Mommy is done with drawing and now Cubby can draw.

I should've worked harder in my middle school art class.  It would have been way more useful than algebra.
Posted by Kristin @ Going Country at 11:04 AM 3 comments:

Labels: all about me, confessions, Cubby

You know what people's reaction is when they hear you're due to have a baby in July?  A grimace and a comment along the lines of, "Well, you're in for a hot summer!"

Although actually, it would suck a lot more to be due at the end of August, because then you'd have an extra month of pregnant heat exhaustion to deal with.  Though I'm not convinced that cuddling close to a newborn in a heat wave--since the kid will, we presume, expect to be fed with great frequency and that happens while in very close proximity to Mom and her feeding mechanisms AHEM--won't be just as bad as being pregnant during a heat wave.

What I was going to say was that ever since I found out I was pregnant and calculated my due date, I've been dreading the whole hugely-pregnant-in-the-heat-of-summer-while-chasing-a-toddler phase. Aaaand here I am.  Hugely pregnant?  Check.  Heat of summer?  Official heat advisory in effect until Thursday WHEE, so . . . check AND HOW.  Chasing a toddler.  CHECKCHECKCHECK, SLOW DOWN, CUBBY, FOR THE LOVE OF GOD AND YOUR HUGELY PREGNANT MOTHER.

But you know, in a way it's kind of a relief to have gotten to the point I was fretting about for so long.  I mean, no, I wouldn't mind if it were twenty degrees cooler, but I really don't think I'm any hotter than I already am during the summer (that is VERY, in case you have missed my extensive bitching on the subject for the past four years).  And we don't sleep when it's hot anyway, and I don't sleep in the last stages of pregnancy anyway, so it all kind of goes together in a grand conglomeration of misery.

That said, anytime this kid wants to come or Mama N. would like to send some cooler weather our way, you will not hear me complaining.

Edited to add:  Also on the topic of hot weather survival is ice cream, because I have been eating enormous quantities of it lately.  We were out of my preferred flavor (Perry's White Lightning--dark chocolate ice cream with white chocolate mint fudgy stuff OH MY GOD SO GOOD) and I knew there was no way I was getting through this coming heat advisory without it.  So we took a trip to the nearby market in a nearby village specifically to get this ice cream.  And they were out.  DAMMIT.  My runner-up flavor was Perry's Cookies and Cream.  I just scooped out a bowl, and you know what?  It is not Cookies and Cream.  Despite the container being clearly labeled as such, there is no doubt at all that the Cookies part done got left out.  It's vanilla. Plain, unadulterated vanilla, without the saving grace of cookies.  That, my friends, is what I call a comical screw by the universe.


I'm eating it anyway, with some maple syrup.  But still, SCREW YOU RIGHT BACK, UNIVERSE.
Posted by Kristin @ Going Country at 5:36 PM 6 comments:

Apparently our lawn tractors frequently break down for Father's Day.  Their little gift to A., I suppose, because for two of the last three years, he's spent part of his Father's Day fixing our lawn tractor.  Including yesterday.  Last year, he spent it pulling the shed straight and bracing it so it wouldn't collapse on the MiL's car.

He does these things voluntarily, I might add.  I told him that after the dump run on Saturday morning, he had the whole weekend to do whatever he wanted.  He was paralyzed by indecision.  So on Saturday he ended up painting the front porch steps and mowing, until the lawn tractor threw a blade off and then he spent another hour or so taking apart the mower deck and J-B Welding the blade back on.

Then we went down to the beach and A. went swimming with Cubby.

Yesterday morning, again, I told A. he could do whatever he wanted for Father's Day.  So he re-located the movable sheep fence to create a place for the sheep to graze on the front lawn.  Then he installed some heavy-gauge wire across the top of the newest stone wall in the front of the garden, to brace up the sagging gate.  Then he re-attached the mower deck to the tractor and mowed a very overgrown lawn.  Then he raked up the mowed grass and delivered it to his sheep to eat, as an experiment.

And then we took Cubby to a lock on the Erie Canal to fish.  So I guess that was the real Father's Day treat for A.  Well, that and the lamb shoulder roast I made for dinner.

A. and I obviously look for different things on our Special Days.
Posted by Kristin @ Going Country at 6:09 AM 3 comments: