Scatalogical Humor. And a Fish Fry.

Yesterday Cubby went to the pediatrician. I went too, as he has not yet mastered the skill of driving. He weighed in at a hefty ten pounds, which means he's gained two and a half pounds in three weeks. I will take some small credit for this, even though my part is really just to provide access to the milk machines. He does the rest.

He has also grown two and a half inches and was pronounced "perfect" by the doctor. Then Cubby expressed his displeasure at being awakened from a sound sleep by projectile pooping two feet across the exam room. And then he peed himself.

The kid knows how to make his displeasure known.

So, as a reward for his outstanding behavior in public in the morning, we took him on his second non-errand outing last night. You may have thought the first non-errand outing was about as small-town America as we could get.

Last night Cubby joined the family for a trip to the VFW in a nearby village so we could all enjoy their Lenten Friday night fish fry. And just to make the outing even more special, Cubby got to sit in the bar with us while we waited for our food.

Yes, I am that person. The person with the baby in the bar. Does it help that at least it was a patriotic bar with the American flag on prominent display? That's more wholesome, right?

Spring Balm for the Winter-Ravaged Soul

Okay, I KNOW it's not technically spring until March 20, according to the calendar. But just ask me what I think about the season designations as assigned by the calendar and I will laugh derisively. And then probably swear a little bit.

Whatever the calendar says, yesterday sure as hell felt like spring to me. Sunny, warm (maybe 50 degrees? I didn't check the thermometer), snowdrops up all over the place, and I swear some of the grass had a faint greenish tinge.

So of course I had to go outside and do some manual labor. Not much. Just a little. I moved some clay pots that had been upturned in the magnolia bed and were covering the emerging crocuses. I shifted the cold frame so it was right over the tiny volunteer lettuce plant I'm trying to get going. I stacked some more wood A. had split so we would be ready for the cold rain that's been forecast for this weekend.

Yes, cold rain. Also an unfortunate part of spring. But I had this one day of sunshine and warmth as reassurance that yes, winter is on its way out and warmth and life are returning to Blackrock.

P.S. Cubby celebrated his month-day yesterday by FINALLY losing that nasty umbilical cord stump. Perhaps I am an unnatural mother, but I did not weep bitter tears at losing the last vestige of my son's time in the womb and his last physical link to me. I thought it was gross and inconvenient and I'm so happy I can give him a REAL bath now.
Posted by Kristin @ Going Country at 5:30 AM 8 comments:

Labels: all about me, country livin', manual labor, randomness, weather

Happy month-day to my favorite child. 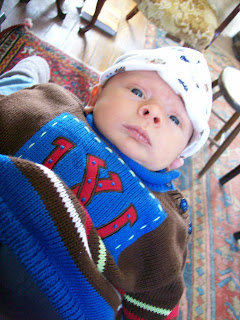 He'll be celebrating with an all day, all-you-can-eat milk buffet.
Posted by Kristin @ Going Country at 7:25 AM 7 comments:

I'm Ready for Some Cooing

So I have this book: "What To Expect the First Year." It is all about, predictably, the first year of a baby's life. There's a chapter for each month, with a list of milestones your baby should hit that month. You know, like lifting his head, rolling over, focusing on faces. That sort of thing.

Cubby is pretty much ahead of the game for everything physical. Like, WAY ahead of the game. I don't just feed the kid--I wrestle with him while he whips his head around and lunges. Hence his nickname of Cobra.

The milestones I am starting to really look forward to are the smiling and cooing ones. It would be nice if he did something in his waking hours* other than eat or thrash wildly and scream when he's not eating. So far, those are the two options. Well, we do have occasional quiet periods of fascination with bright lights, but mostly, it's eating or agitating to eat. Some smiling would be nice. Cooing would be great. I hardly dare to think ahead to the days when he might actually play.

But I shouldn't get ahead of myself. For now we'll just work on getting him to close his mouth long enough to smile. 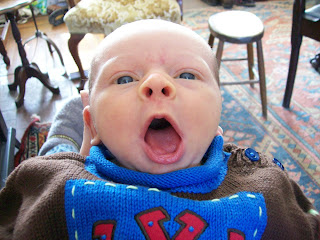 You would think, but you would be wrong.

ANNOYING.
Posted by Kristin @ Going Country at 7:34 AM 5 comments:

Notes from the Gardens

It's not really time to work in the garden yet, seeing as how there's still snow on the ground. But it's going to be in the forties and mostly sunny all week, which means that snow is doomed. And once it's all gone . . .

1) I can rake off the covering of leaves and hay from the garlic and shallot shoots. Those are planted in the fall, but the small shoots need to be protected from the worst of the cold. And THEN, the protective layer needs to be removed in the spring before the shoots suffocate under it. High-maintenance little things, aren't they?

2) I can dig up the rest of the leeks that are, yes, STILL OUT THERE. Can I get an amen for any plant that can withstand our winters and still manage to be edible in MARCH? AMEN.

3) Also, there are parsnips out there that could be harvested. Except I don't really like parsnips all that much, so no amen for them.

4) I can pull up the remains of the collard plants. I harvested the last of the leaves some time ago, but the ground was too hard to pull the stalks up without just breaking them. So they've been sitting out there, yellowing and forlorn, awaiting the spring garden clean-up.

5) I can finally dump the garbage can of refuse I collected during the fall garden clean-up. And when I say "I," I really mean "A.," because that sumbitch is HEAVY.

6) I can move the cold frame so it's more centered over the one tiny volunteer lettuce plant that's been sitting out there since October, refusing to grow until it got warm. I'm hoping that lettuce plant will take off this week, and we can have lettuce in March. Wouldn't that be awesome? Yes. Yes, it would.

7) I can rake away all the hay that's accumulated in front of the barn as A. moved hay all winter for his woolies. And probably uncover some slugs in there while I'm at it, because that's exactly the kind of protective cover they like. Time to bust out the salt.

8) I can be outside, in the sun, doing physical labor.

Alleluia and praise the spring, gardening time is coming again.
Posted by Kristin @ Going Country at 6:09 AM 8 comments:

Labels: all about me, country livin', gardens, manual labor

Doin' It My Way

Back before I had Cubby, I remember reading some site for new moms that had a list of suggested outings for the new mom and baby. You know, so mom could get out of the house and interact with people who don't mess their pants on a regular basis. The suggested outings--coffee shops, Target-- were pretty much all ridiculous for me, because they would all involve a 20-mile drive to the Small City.

It turns out that Cubby's first real outing was with both A. and me, and we took him first to the farm store (A. needed sheep food) and then to Wal-Mart (I needed some clothing that would allow me to feed him without lifting my entire shirt and flashing the world). Appropriate for a newborn country boy and future woodchuck, no?

Cubby had his first non-errand outing yesterday. We took him to the all-you-can-eat pancake breakfast at a local church. It was perfect, because it was only 10 minutes away, there were lots of people there who hadn't seen him yet and got to coo over him (he's a very coo-able baby--trust me), and I got to glut myself on pancakes and sausage cooked by someone else.

* Incidentally, our very nice, formerly city-dwelling neighbors stopped by to see Cubby soon after he was born. They brought a bunch of clothes as gifts, including a camouflage onesie and some little camo booties with deer heads on them. A clear indication that they definitely consider us their redneck neighbors. But I can't WAIT until Cubby can fit into that stuff. Because we ARE the redneck neighbors and yes, my son will wear camo and probably get a gun at an early age. It's inevitable.
Posted by Kristin @ Going Country at 7:35 AM 7 comments: